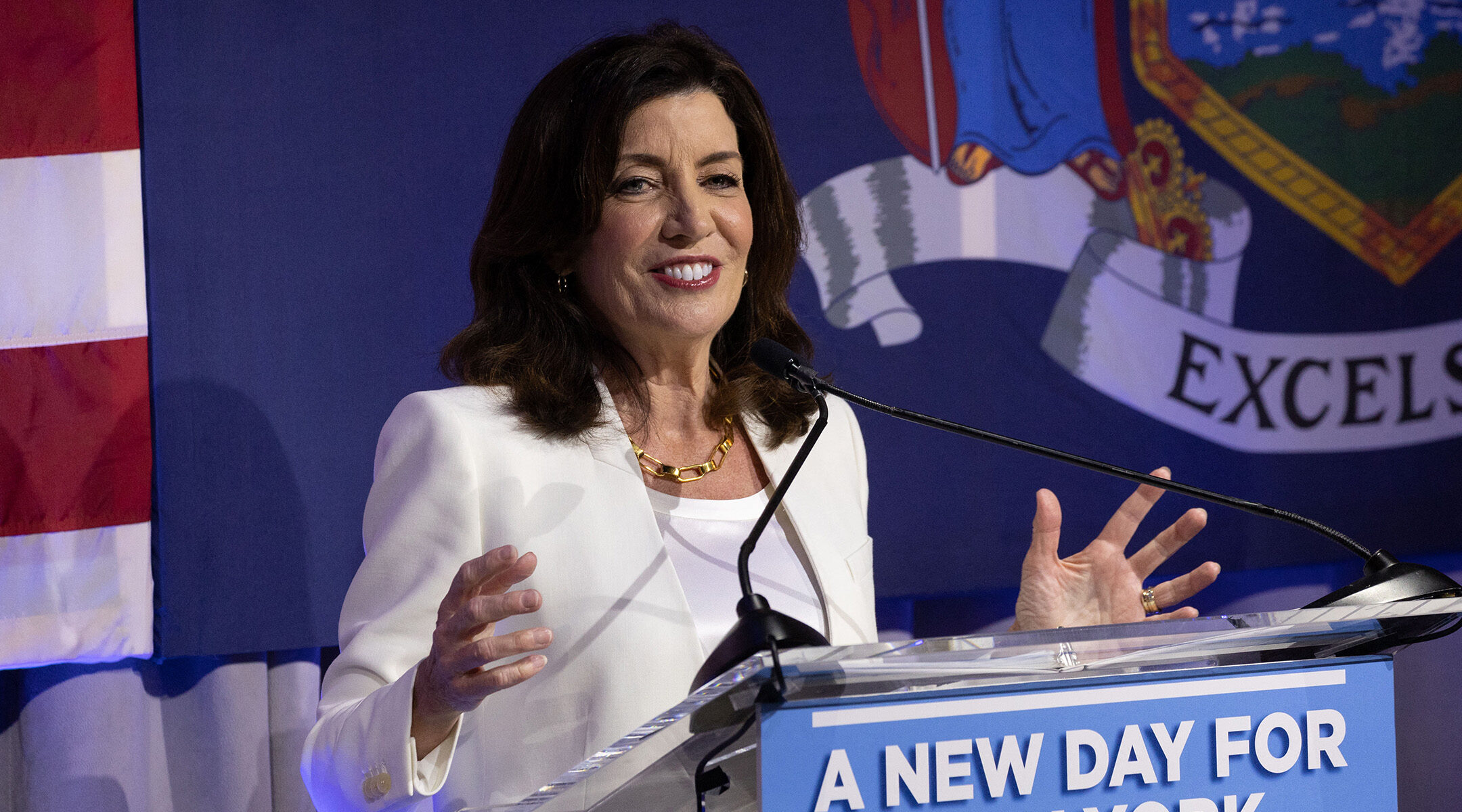 Zeldin, one of two Jewish Republicans in the House of Representatives, beat three other hopefuls in Tuesday’s primary, including former mayor Rudy Giuliani’s son Andrew, with 44 percent of the vote.

Should Zeldin defeat Hochul in the upcoming election, he would become the first Jewish Republican governor of New York. Zeldin was one of 100 House Republicans who voted against certifying President Joe Biden’s victory, but said his campaign will focus on issues like crime, affordability, schools and Hochul’s record.

“She’s in over her head,” Zeldin said of Hochul in a speech after securing the nomination. “She’s a walking identity crisis, to be honest.”

"She's in over her head. She's a walking identity crisis to be honest."@LeeZeldin slammed @KathyHochul in his victory speech Tuesday night, previewing a contentious general election campaign. pic.twitter.com/vt51zsPGJ5

Hochul, who became governor in 2021 after Andrew Cuomo resigned amid allegations of sexual harassment, beat back challenges by progressive Public Advocate Jumaane Williams and conservative Democrat Tom Suozzi, easily defeating both with over 67 percent of the vote.

She would be the first female governor in New York elected to a full term should she be elected.

“I stand here because of the generations of women before me, who banged up against glass ceilings,” she said in a speech on Tuesday night. “To the women of New York, this one is for you.”

Her path to securing the nomination seemed breezy. She gained endorsements from Jewish communities that included Hasidic Williamsburg, the fractured Satmar community and Jewish leaders from the Long Island enclaves of the Rockaways and Five Towns.

Her choice for lieutenant governor, Antonio Delgado, who took the position after his predecessor Brian Benjamin was embroiled in an embezzlement scandal, also secured the nomination, easily defeating progressive activist Ana De Maria Archila, who had the support of Rep. Alexandria Ocasio Cortez and former Council member Diana Reynes.

Delgado, whose wife is Jewish, also received broad support from the Jewish community during the campaign.

In her victory speech, Kathy Hochul said the Democrats are the party that can take New York forward.

"We cannot, and will not, let right-wing extremists set us back on all the decades of progress we have made right here." pic.twitter.com/wl95jwYrxU

Hochul campaigned as a fighter for women in the wake of a Supreme Court ruling overturning Roe v. Wade. She also implemented stronger gun control measures after 13 people were killed in a racist mass shooting in Buffalo.

She came under fire by both the progressive wing of her party and Suozzi during the election for adding a $1.3 billion stadium for the Buffalo Bills as part of this year’s state budget, which includes $850 million from public funding.

In her speech on Tuesday, she focused on far-right extremists and doubled down on her support of women’s rights.

“We cannot and will not allow the extreme right to roll back the progress we’ve made, whether it’s a Trump cheerleader running for Governor of our State, or a right-wing majority sitting on the highest court in the land,” Hochul said.

In another Brooklyn race, Emily Gallagher, a progressive who was backed by the United Jewish Organization of Williamsburg, a Satmar body, steered clear to reelection.