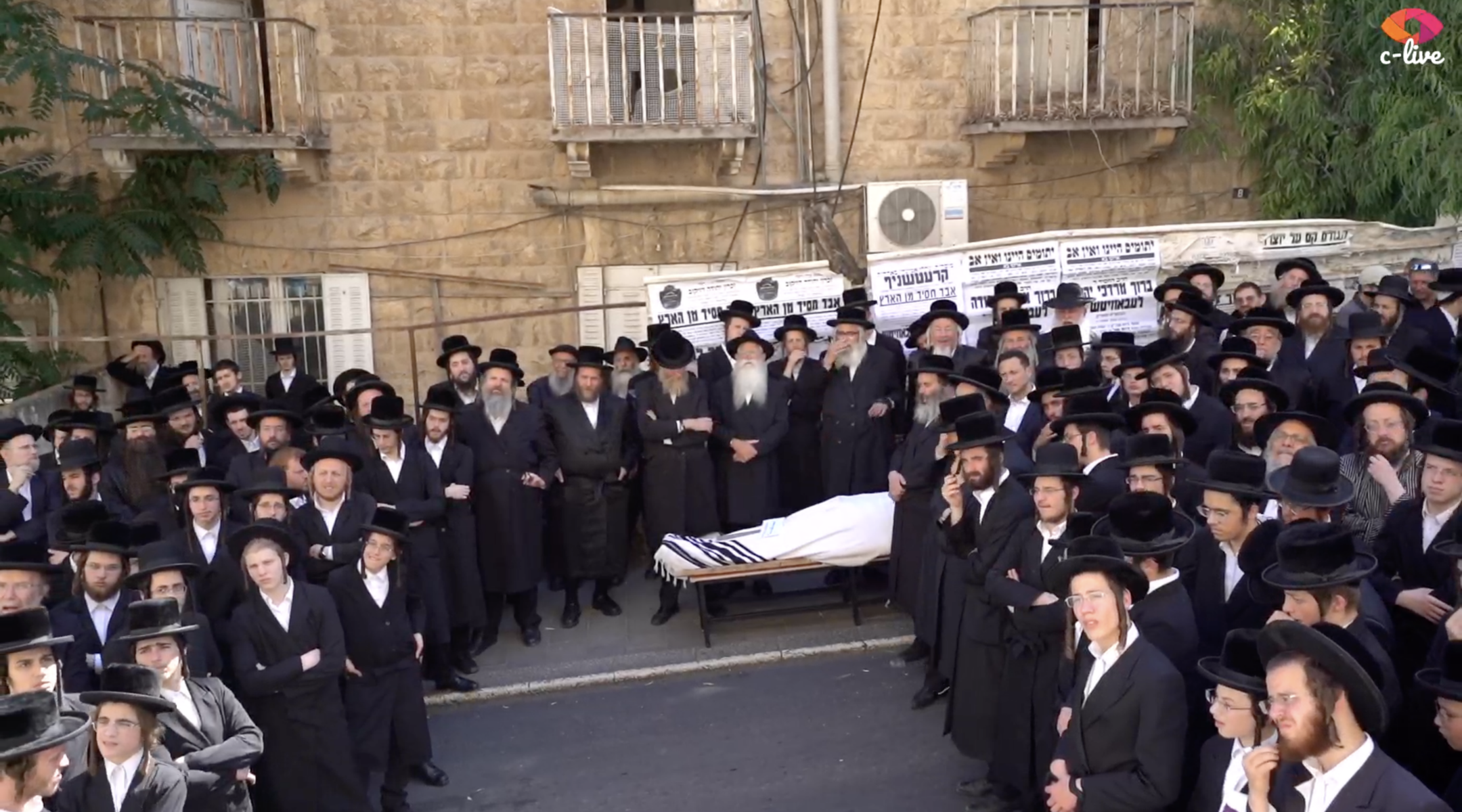 The body of Baruch Lebovits, a convicted child abuser, is visible at his funeral in Jerusalem, July 4, 2022. (Screenshot from livestream)
Advertisement

(JTA) — A cantor from a prominent Hasidic family whose child abuse conviction shook up both his community and Brooklyn politics has died.

Baruch Lebovits died Saturday at 71, 12 years after he was first convicted of repeatedly sexually abusing a 16-year-old boy. He was buried in Jerusalem on Monday at a funeral attended by hundreds after a separate large gathering in Borough Park, Brooklyn, on Sunday.

The sendoff offered no indication that Lebovits stood at the center of a saga that had bitterly divided his community and traumatized many within it.

Lebovits was sentenced to 10 to 32 years in prison after being convicted of eight sex abuse counts during a 2010 trial, at a time when Brooklyn prosecutors were seeking to shed the image of being soft on alleged offenders from Orthodox communities. He was released after his conviction was overturned on a technicality in 2012, then sent back to prison in 2014 after pleading guilty to felony sex offenses with a minor when the case was prosecuted again. He was released after 82 days and settled back into his life in Brooklyn.

By that point, the case had gained widespread attention because of Lebovits’ representation by celebrity attorney Alan Dershowitz, advocacy on his behalf by top Satmar rabbis and intimidation and retribution against his accusers.

A lengthy New Yorker article in November 2014 detailed the saga. Titled “The Outcast,” the article stitched together and expanded reporting from local and Jewish press, including the Jewish Telegraphic Agency and New York Jewish Week, to show how the father of a boy who said Lebovits had molested him broke communal norms by involving the police, then paid dearly for his transgression. Lebovits’s abuse was widely known within the Hasidic community, the article concludes, but the father — Sam Kellner — was punished more harshly, including by being framed as trying to extort the Lebovits family in exchange for dropping the case.

The case had implications across the local community and beyond. An Orthodox man who died by suicide shortly after his wedding in 2010 was reported to have suffered alleged abuse by Lebovits, and another man in the community who was tried for sex abuse said he had been abused by Lebovits himself.

Meanwhile, the handling of the case became a prominent issue in the 2013 Brooklyn district attorney election in which Charles Hynes, the D.A. who prosecuted both Lebovits and, seemingly more doggedly, Kellner, was ultimately trounced.

Both Lebovits and Kellner are household names, according to a source in the Hasidic community in Brooklyn — Lebovits as a serial sex offender, and Kellner as an example of what can happen to those who go outside the community’s legal system to civil authorities.

Lebovits had a beautiful singing voice and was a charismatic presence in the Munkatch Hasidic synagogue where he prayed, the source, who lives in Borough Park, told JTA on the condition of anonymity. But his abuse of young boys was well known, the source said, and the fact that he faced few consequences within the community sent a troubling message that his funeral underlined this week.

“Seeing the way he is getting the highest level of respect even though everyone knew and knows how dangerous he was — this is a reminder that the the bad guy wins,” the source said.

A Hebrew-language website affiliated with the Chabad movement published pictures from his funeral procession on Sunday, and an obituary published in Hebrew in Israeli Orthodox media omitted any mention of Lebovits’ conviction, guilty plea or time in prison. It lauded him as a learned member of Brooklyn’s Hasidic community who came from a prominent rabbinic family and noted that his survivors include a brother who is the current leader of the Nikolsburg Hasidic sect, based in Monsey, New York, and a businessman son.