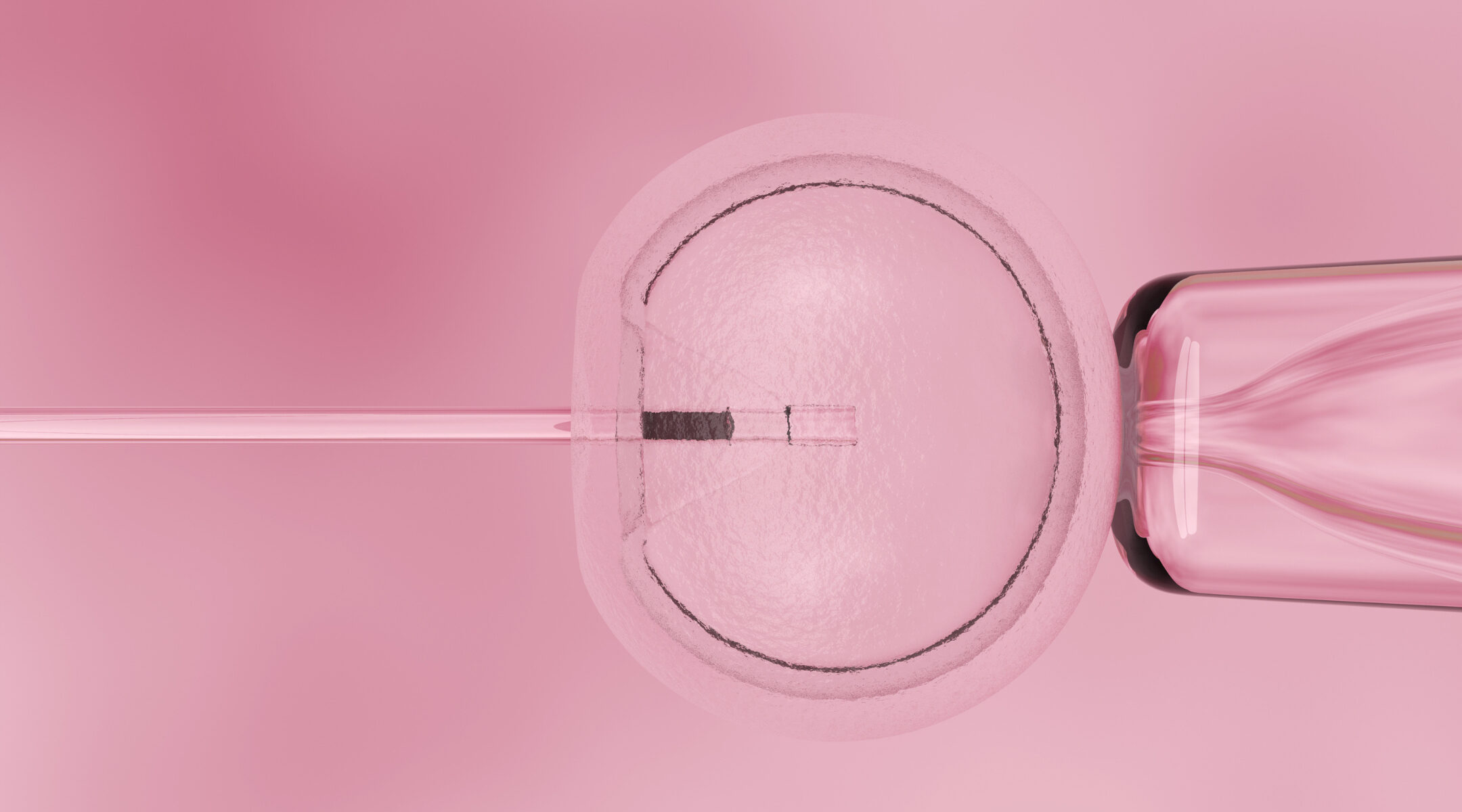 (JTA) — Kristin had been trying to conceive for two years before learning that she had two blood-clotting conditions that increased her risk of miscarriage and could make pregnancy and childbirth dangerous, even fatal.

So she and her husband Shai moved to a contingency plan: seeking a surrogate to carry their baby. The Jewish couple assumed they would work with someone near their home state of Ohio, like Illinois or Minnesota, where surrogacy and termination laws are more lenient.

But then the U.S. Supreme Court overturned Roe v. Wade, ending abortion rights in the United States. Suddenly, Ohio prohibited abortion after just six weeks, and the prospect of new restrictions in other nearby states grew more real.

So with the support of Hasidah, a nonprofit that gives grants and guidance to Jewish families dealing with infertility, Kristin and Shai decided to seek a surrogate in Canada instead.

“It just made the most sense to protect the safety of a surrogate who’s doing this wonderful thing, this beautiful gift for us and making sure that her life can be protected above the life of a fetus or a clump of cells that is not even a child yet,” Kristin told the Jewish Telegraphic Agency. She asked that her last name be withheld for her privacy.

The family’s change of plans represents just one of many scenarios that Jewish infertility-support organizations are encountering as Americans adjust to a post-Roe reality. Those organizations are largely aimed at helping to create pregnancies, not end them. But with anxiety high about whether the new legal landscape could pose threats to assisted reproductive technologies, especially in vitro fertilization, the Dobbs ruling is throwing their work, and their clients, into turmoil, too.

“If you’re having an infertility experience, the concept of this is scary enough,” said Rabbi Idit Solomon, Hasidah’s CEO and founder. “For them, it’s reality: ‘I am in the process of doing this, what happens if?’”

Solomon recalled meeting with a couple from Texas beginning the surrogacy process shortly after the Dobbs decision.

“The reality is, I didn’t counsel them,” Solomon said. “I just asked them, ‘Have you thought about going through this process?’ And they interrupted me: ‘We’re getting a surrogate out of state.'”

Hasidah is one of several groups that have emerged in recent years to help Jews fulfill the biblical mandate to be fruitful and multiply. Animated by concerns about fertility, Israel will pay for any infertile couple to have two children through IVF, no matter how many rounds it takes; the country is the world’s leader in IVF use. But in the United States, the process can cost on average $20,000 per round, making it financially burdensome for many families. Hasidah, the Jewish Fertility Foundation, Puah America and a handful of other groups defray the costs while providing support during the grueling process.

First used successfully in 1978, IVF brings eggs and sperm together in a laboratory to create embryos outside of the womb. The embryos can then be monitored for several days to assess which ones are most likely to result in a successful pregnancy. It is also possible to screen the embryos for genetic diseases so that only healthy embryos are transferred into carriers of those diseases — a boon for Jewish couples from Ashkenazi backgrounds, who are more likely to be carriers of a host of genetic diseases, such as Tay-Sachs, a degenerative condition that leads to death in childhood.

In addition to being at higher risk for genetic diseases, non-Orthodox Jews may have a higher than average rate of infertility overall, research by the Jewish Fertility Foundation has found. Exactly why is not understood, but one theory is that Jewish couples tend to pursue higher education at higher rates, making them older on average when they start having children. (Orthodox Jews start having children an average of five years earlier than non-Orthodox Jews and typically have more children, according to a Pew study from 2021.)

Embryos outside of a womb are not subject to restrictions under any of the state laws limiting abortion that the Dobbs decision greenlighted, according to multiple analyses by news organizations and advocacy groups. But there is worry that they could be in the future as laws are revised and as advocates for the idea that life begins at conception are empowered.

A couple of concerns stand out. Since the goal of IVF is to create as many embryos as possible, then transfer the healthiest into the womb, it often results in many more fertilized eggs than can be used. Some opponents of abortion say they want those embryos to be donated, not destroyed.

Kristin said she and her husband planned to store their embryos in Canada out of fear that a “nightmare scenario” could arise in the United States where she would lose autonomy over what amounts to their own DNA.

“Depending on the changes in law, if you abandon [the embryos], the clinic could just put them in someone else and then you have random children walking around that you don’t know about and didn’t plan on creating,” she said.

That scenario may be unlikely for now, but the question of what to do with unused embryos can be significant for Jews who use IVF. While Jewish law is still developing around IVF, most rabbinic opinions agree that embryo donation is problematic according to halacha, or Jewish law, because of the outside possibility that it could result in unintended incest in the future. They also tend to agree that passively allowing embryos to be destroyed, such as by not refrigerating them, is permissible.

IVF also results in multiple pregnancies more often, which are more dangerous than pregnancies of a single fetus. Sometimes, doctors will advise selectively aborting one or more fetuses to create healthier conditions for those that remain, as well as for the person who is pregnant. Because Jewish law permits and even requires ending a pregnancy when the life of the mother is at stake, reduction is a scenario where many traditional rabbinic authorities would permit abortion. But in the states where abortion has been banned or severely restricted, selective abortions may no longer be possible or easy to obtain.

The high costs of IVF — financially, emotionally and physically — coupled with new risks may deter some Jewish families from undergoing the process in states with many restrictions on abortion, Solomon said.

“If there’s that much riding on it, you don’t want to be in a place where any kind of care could be questionable,” she said. “You want to minimize risk as much as possible.”

Orthodox Jewish groups have expressed more comfort with the Dobbs ruling than non-Orthodox Jews, many of whom have argued that Jewish law supports unfettered abortion access. But even fertility groups catering to Orthodox Jews say they recognize that the landscape has changed for some of the families they work with.

Puah America, a Jewish fertility and women’s health organization that works with Orthodox couples, has not made any changes as a result of the Dobbs ruling. But its rabbinic director, Elan Segelman, said he could anticipate adjustments to the group’s support in the future if the right course according to Jewish law for a family conflicts with the law in their state.

“Of course as American Jews and law-abiding Jews, we would never ever tell someone to do something illegal,” Segelman said. But, he added, “The halacha is the halacha. The question is carrying it out. It may just be more complicated, based on where the people are.”

For the Jewish Fertility Foundation, based in Atlanta, the Dobbs decision comes a year after a grant allowed the group to expand its operations to two new states — Alabama and Florida, both of which are among the 23 states to face restrictions on abortion as a result of Dobbs. Now it is carefully monitoring how its clients will be affected in their quest to have babies and even offering time set aside during regular group support sessions to discuss the implications of the ruling.

But the organization — which is not an advocacy group and follows guidance from non-Jewish fertility support organizations such as RESOLVE — says nothing has changed on the ground, and their clients will continue with their fertility treatments as usual.

“We don’t know what’s going to happen and each state could be different,” said Rachel Loftspring, an attorney and board member who was instrumental in bringing the group to her home state of Ohio several years ago. “So we’re sharing what we know.”

The Jewish groups that are supporting fertility are now being joined by specifically Jewish groups aimed at supporting abortion access. The National Council of Jewish Women and Rabbis for Repro announced in May that they would be partnering with the National Abortion Fund to raise money to help pay for travel, abortion procedures, and the NAF’s hotline. 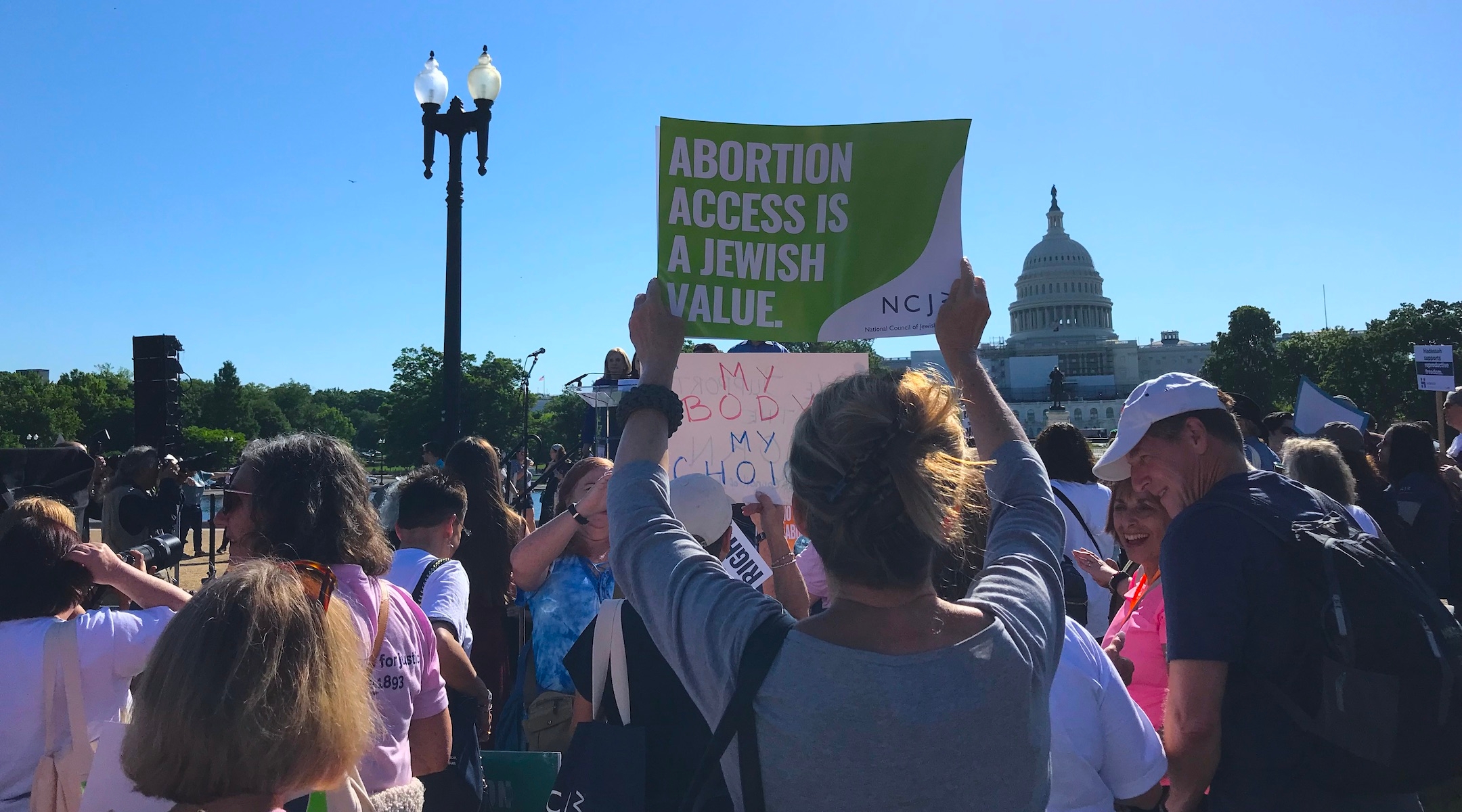 A protester holds up a sign reading “Abortion Access is a Jewish Value” at a rally in front of the US Capitol Building organized by the National Council for Jewish Women, May 17, 2022. (Julia Gergely)

Melissa Scholten-Gutierrez, an Orthodox rabba in Atlanta who is on the advisory board of Rabbis for Repro, said her past experience as a social worker and prenatal health educator underscored for her that abortion can be an integral part of a fertility process. (Scholten-Gutierrez received her rabbinic ordination at Yeshivat Maharat, the first Orthodox yeshiva to ordain women as clergy. As “rabbi” is a male term, Scholten-Gutierrez refers to herself as “rabba.”)

She recalled counseling a woman in Colorado who found out halfway through her pregnancy that her fetus would not be viable for more than a few hours after birth. But the law in Colorado at the time did not permit people using state health insurance to get an abortion that late into a pregnancy.

What’s clear is that groups supporting Jewish families seeking to have babies may have a role to play in helping them navigate a more restrictive landscape.

For Kristin and Shai, whose mother is a Reform rabbi, working with Jewish coaches while they pursue surrogacy at a time when pregnancy has become more perilous in their own state is essential.

“Our value systems and our morals were developed by our Jewish upbringing,” Kristin said. “Having a Jewish organization not only will help us through the process, but help support us in understanding the best ways to go about it to protect the surrogate is really important to us.”