Biden and Lapid jointly pledge to deny Iran weapons, but they diverge on the details 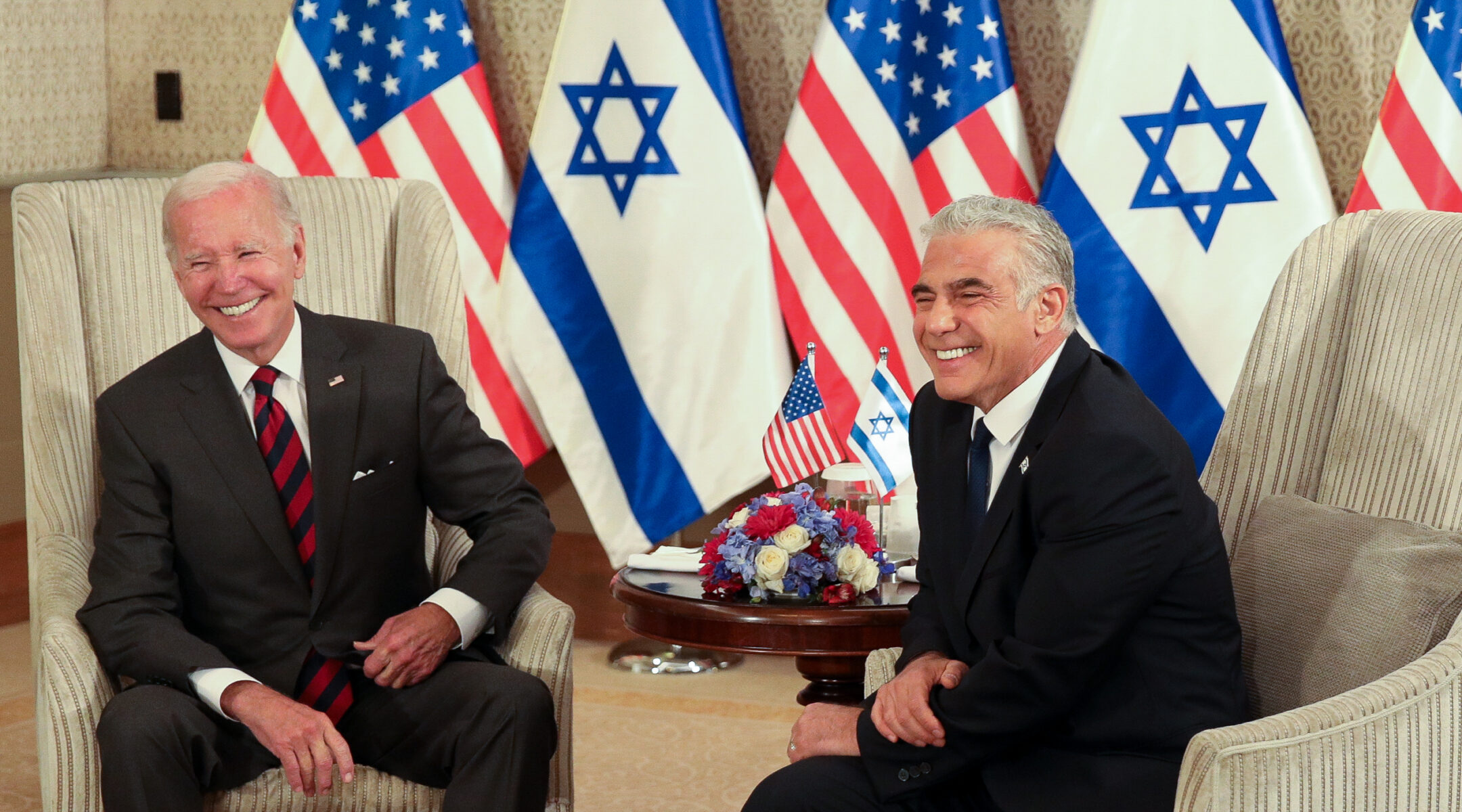 JERUSALEM (JTA) — After releasing a joint statement that demonstrates unity on the need to counter the Iranian nuclear threat, U.S. president Joe Biden and Israeli prime minister Yair Lapid gave statements that demonstrate radical differences in their approach to doing so.

The document released on Thursday, the second day of Biden’s visit to Israel, is a 1,500-word statement titled “The Jerusalem Declaration on the US-Israel Strategic Partnership.” It states that the United States is committed “never to allow Iran to acquire a nuclear weapon” and is “prepared to use all elements of its national power to ensure that outcome.”

But after the leaders’ meeting Thursday, Biden and Lapid gave a joint press conference in which Biden said that in working to prevent a nuclear Iran, “I continue to believe that diplomacy is the best way to achieve this outcome.”

Lapid struck a different note, showing some of the daylight between Israel and the United States on the issue of what is widely understood to be the biggest threat in the region.

Biden also said that Iranian nuclear capabilities threaten not only Israel and the United States, “but the rest of the world.”

The declaration also celebrates and adds to the U.S.-Israeli alliance in the context of partnerships with additional regional powers, providing the Biden administration with a positive outcome from his two-day trip to Israel as he prepares for what may prove the more challenging part of his Middle East visit: meetings with the heads of state of the Palestinian Authority and Saudi Arabia.

Released after a 50-minute meeting between the two leaders, the declaration also makes some new commitments, such as to a four-way strategic cooperation among Israel, the United States, India and the United Arab Emirates.

The joint Jerusalem Declaration speaks of the “unshakeable U.S. commitment to Israel’s security, and especially to the maintenance of its qualitative military edge,” a term long in use in international discussion of Israeli military power.

The United States “reiterates its steadfast commitment to preserve and strengthen Israel’s capability to deter its enemies and to defend itself by itself against any threat or combination of threats,” the declaration says, and “further reiterates that these commitments are bipartisan and sacrosanct, and that they are not only moral commitments, but also strategic commitments that are vitally important to the national security of the United States itself.”

Integral to this, the declaration also states, “is the commitment never to allow Iran to acquire a nuclear weapon, and that it is prepared to use all elements of its national power to ensure that outcome.”

The United States will “confront Iran’s aggression and destabilizing activities, whether advanced directly or through proxies and terrorist organizations such as Hezbollah, Hamas, and Palestinian Islamic Jihad,” the document says.

Israel “thanks the United States for its ongoing and extensive support for deepening and broadening the historic Abraham Accords,” the 2020 accords that paved the way to the establishment of diplomatic relations between Israel and the United Arab Emirates, Bahrain and Morocco.

For its part, the “United States welcomes these developments and is committed to continue playing an active role” in efforts to “deepen the ties between Israel and all of its regional partners” and “to expand the circle of peace to include ever more Arab and Muslim States,” the declaration also states.

Unusually for a diplomatic paper, the declaration also features references to spiritual elements of Judaism. “The United States and Israel affirm that among the values the countries share is an unwavering commitment to democracy, the rule of law, and the calling of ‘Tikkun Olam,’” the Hebrew term meaning “repairing the world” that has come to stand in for social justice.

“It’s not a defense pact, but it amounts to the same thing,” Yitzhak Eldan, a former head of protocol at the Israeli foreign ministry and a former head of its diplomat academy, told the Jewish Telegraphic Agency about the declaration. “In diplomatic terms, this is a warm, long and heartfelt embrace – and one that is not lost on our enemies and new allies in the Middle East,” Eldan added.

Following his warm reception in Israel, Biden’s visit to Bethlehem in the West Bank on Friday is off to a rocky start. Amid disagreements between Biden’s team and that of Palestinian Authority President Mahmoud Abbas, the two leaders will not be delivering a joint statement at the end of the meeting, as is customary for such meetings.

Instead, they will each give a separate statement, Palestinian officials told Haaretz, due to disagreements on the Palestinian side with some of the wording that Biden’s team insisted be in a joint statement, according to that report.

Biden referenced the United States’ commitment to a two-state solution of the Israeli-Palestinian conflict during his first speech in Israel, at Ben Gurion Airport. He also asked Lapid during their meeting “not to surprise” the United States with any moves concerning the Palestinians, Ynet reported.

Earlier in the day, Biden and Lapid participated in a video call with the leaders of India and the United Arab Emirates, Mohamed bin Zayed Al Nahyan and Narendra Modi. The meeting, in which Biden and Lapid sat side by side at a conference room at the Waldorf Astoria hotel in Jerusalem, ended with a joint statement on deepening research and development cooperation between the countries, including on food security and sustainable energy.

This gives Biden “achievements under his belt as he continues to Saudi Arabia for a meeting that is at best going forward in challenging circumstances,” Eldan said.

In Saudi Arabia, Biden will meet with Saudi Crown Prince Mohammed bin Salman, the country’s de facto leader, who is believed to have been behind the 2018 murder of Washington Post journalist Jamal Khashoggi in Turkey.

The visit, which Biden has taken flak for at home, comes amid preexisting disagreements between Saudi and American officials on Iran. The Biden administration is interested in reaching a diplomatic agreement with the Islamic Republic on limiting its nuclear activities. But Saudi and Israeli officials have criticized the terms of the nuclear deal that the United States brokered, then left, in the past, warning Iran cannot be trusted to honor it.

His visit to Saudi Arabia, a major exporter of petroleum, is taking place amid high fossil fuel prices. Biden is expected to ask the Saudis to up production to counter rising gas prices, particularly given his effort to reduce reliance on Russian oil after that country initiated a war against Ukraine.