Jewish pitcher Eric Reyzelman throws 100 mph. Is it enough for the MLB Draft? 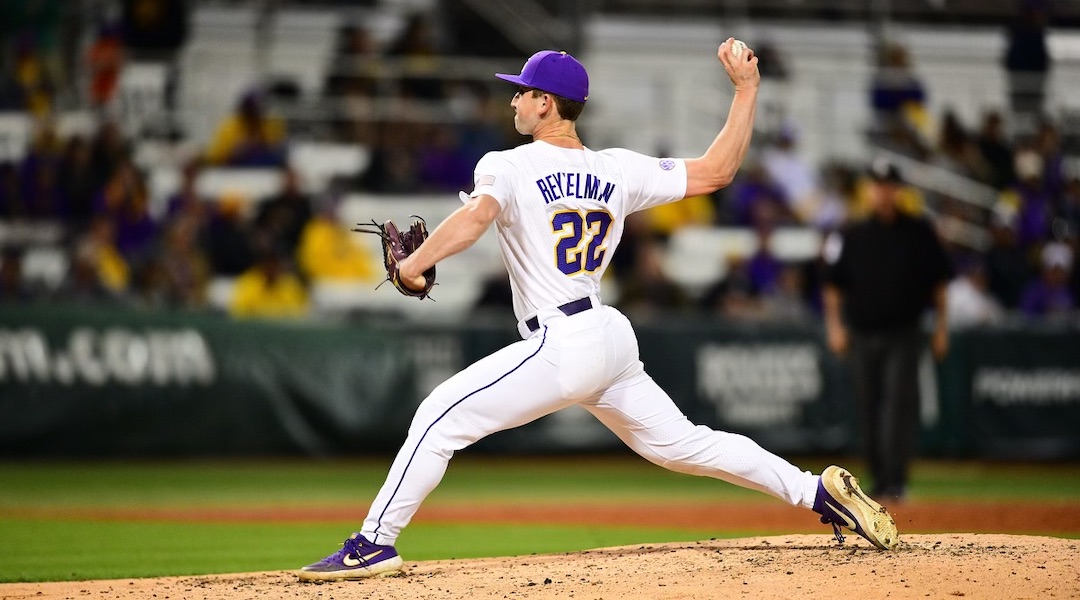 Jewish pitcher Eric Reyzelman, in action for Louisiana State University, has his sights set on a career in Major League Baseball. (Courtesy)
Advertisement

(JTA) — For the pro baseball prospect Eric Reyzelman, resilience runs in the family.

The 21-year-old pitcher is the son of two Jewish immigrants from the former Soviet Union — his mother Victoria came to the U.S. from Ukraine in 1989, and his father Alex from Moldova years earlier.

Reyzelman said both of his parents struggled financially as they worked to build their lives in a new country with a new language. Victoria is a chiropractor and Alex a podiatrist — handy trades for the parents of athletes. Eric has two brothers, one of whom played football at Fresno State University.

Reyzelman’s mother has an uncle who lives in Kyiv. As Russia’s war has raged there, she has sent money to her family, who had been running a bakery to help out members of their community.

“Seeing them and the way that they use the work that they’ve done, the work they put in to help others is an unbelievable example for me, and my siblings as well,” Reyzelman told the Jewish Telegraphic Agency. “Family-wise, I come from the best and learn from the best.”

Eric Reyzelman has needed those lessons in toughness to get to where he is now: a Louisiana State University standout who can clock 100 miles per hour on the radar gun and could get picked in this year’s Major League Baseball draft, which takes place this weekend.

Reyzelman was twice cut from his high school team in Concord, California, about 30 miles east of San Francisco, because of his self-described lack of a work ethic. He underwent ulnar collateral ligament reconstruction on his elbow — better known in baseball as Tommy John surgery — and had his college career disrupted by the COVID-19 pandemic. But he wouldn’t change his course of events.

“I think that had I not gone through what I went through in high school, I wouldn’t be anywhere near where I am,” Reyzelman said. “I think that I needed to be told no, and I guess one year wasn’t enough, I needed it multiple [times] for the switch to finally flip in my head to say that I need to make a change.” 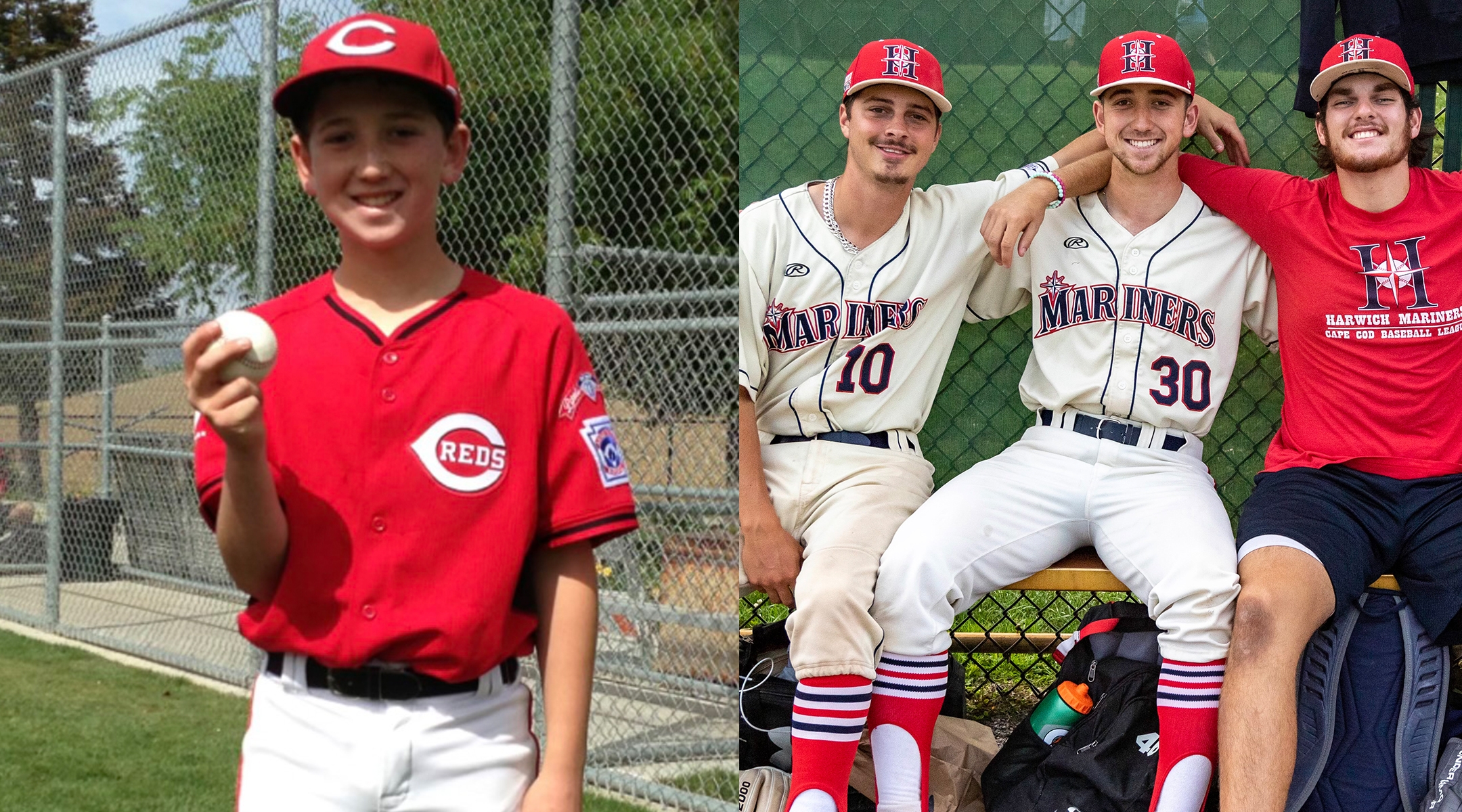 Jonathan Mayo, who covers prospects and the draft for MLB.com, said he has had Reyzelman on his own radar for a long time. The 6-foot-2 righty brings more than just a top-notch fastball — his arsenal also includes a cutter, a changeup, a curveball and a slider.

Reyzelman is not expected to be a first-round pick, but with 20 rounds and more than 600 total selections, the MLB Draft is by far the largest in professional sports. It begins Sunday and is split among three days.

Unlike Jacob Steinmetz and Elie Kligman, who last year became the first two Orthodox Jewish players drafted into baseball, Reyzelman is not Orthodox, even though he has attended the Chabad-Lubavitch chapter at LSU. But he said he hopes to get involved in the local Jewish community wherever his career takes him.

“I plan to do what I can to make that happen,” he said. “Reaching out to whoever I have to, observing holidays, being at Shabbat dinners, any way that I’m able to be a part of it is something that I’m hoping to do.”

Judaism has always been a key aspect of Reyzelman’s identity, including on the mound.

As he navigated the ups and downs of getting cut in high school and recovering from surgery, Reyzelman said his faith “helped me tremendously.” And he thinks his Jewish practice will continue to evolve.

“I kind of want it to progress the same way the career is, to get stronger as it goes on,” he said. “Because for me, I think more recently, I’ve started taking deeper dives into it and wanting to learn a little more.”

Reyzelman, who has competed in tournaments with Maccabi USA, said he hopes to go on a Birthright trip to Israel this winter. He also wants to play for Israel in the World Baseball Classic, the international tournament that next takes place in 2023.

That all started when Reyzelman saw the documentary “Heading Home: The Tale of Team Israel,” which follows the underdog team as they enjoyed an unlikely run of success at the 2017 WBC.

“Since then, it’s been like, I want to do everything I can to play on that team and be a part of it,” Reyzelman said. “That was back when I wasn’t playing high school baseball, it was kind of like a fever dream — getting cut from high school, but wanting to play in the World Baseball Classic for a national team. So as time’s gone by, it’s starting to get a little more and more realistic.”

Reyzelman said he is in conversations with the team, with some help from Mayo, who produced the documentary. But Reyzelman’s main focus for now is taking the next step in his path toward professional baseball.

Depending on the outcome of the draft, Reyzelman said returning for another year at LSU is on the table — or, as he put it, he has two Plan As.

“Knowing whether the draft comes out with the opportunity I’m looking for or it doesn’t, I’m still ecstatic both ways,” he said. “Get to throw another year at LSU, or start my pro career. So we’ll just have to see, and just really excited for whatever lies ahead.”

A few factors will play into Reyzelman’s decision to go pro next year, including the team that drafts him, the round in which he is selected and any signing bonus he may be offered. Given the depth of the MLB Draft, it is common for later-round selections to return to college and reenter the process the following year.

Heading into the big weekend, Reyzelman is just grateful to have made it to this point.

And whenever that career does begin, whether next week or next year, Reyzelman does not take lightly the prospect of representing his fellow Jewish fans.

“I think that every time that a Jewish player steps on a mound, or gets in the box, I think that he’s playing for more than just himself, and I think they have a fan base that they don’t even know about behind them,” he said. “I think that’s extremely special. And to have the opportunity to possibly be a part of that, to me, is unbelievable. I just never want to take it for granted.”