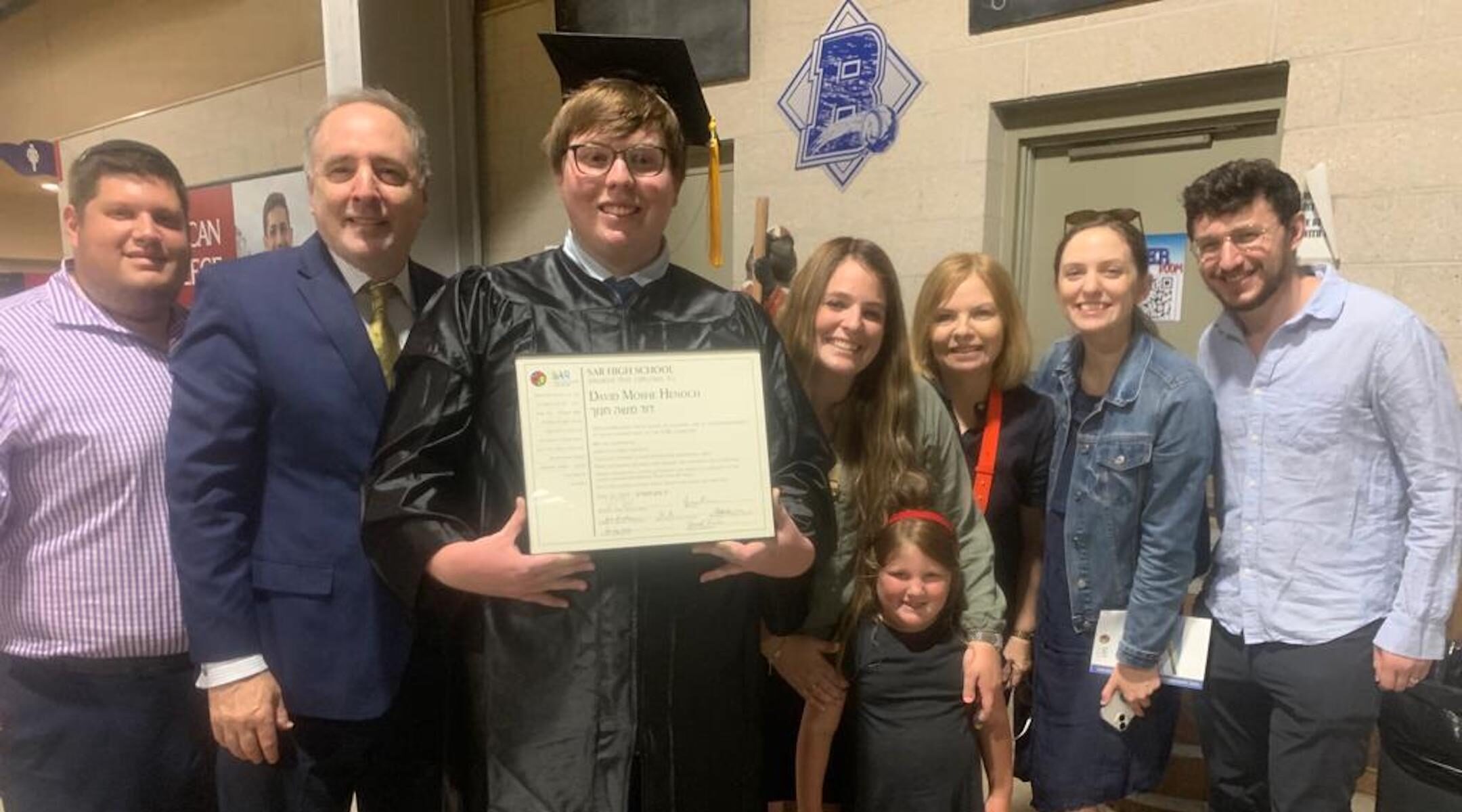 Henoch and his parents, sisters, brothers-in-law and niece the day of his graduation from SAR, June 13, 2022. (Courtesy Henoch family)
Advertisement

(New York Jewish Week) — Riverdale is in mourning for David Moshe Henoch, 18, who died July 10 after a scuba diving accident while on a trip with his father in Miami, one month after his graduation from SAR High School in June and just weeks after his middle sister’s wedding.

The tight-knit Modern Orthodox community in the Bronx, where Henoch grew up and attended the SAR Jewish day schools, remembered him as a curious, sensitive and empathetic leader among his peers, with a deep sense of humor and excitement for many different areas of life. Friends and family described him as an avid adventurer whose favorite activities — many of which he loved to do with his father Avi — included snowboarding, sailing and basketball. He was a certified scuba diver.

Henoch, who went by the nickname Divi, had plans to complete a gap year at Torah Tech in Tel Aviv before studying engineering at the University of Florida.

Henoch was the youngest sibling of his family, the baby brother to Ariella Goldhammer, 30, and Britt Henoch, 27, but displayed what friends and family called a maturity beyond his years.

Britt remembered her wedding, held June 27, when Divi helped keep her stress and emotions at bay by staying with Britt and warding off guests. The two of them went for a drive alone together before the big day. “Divi really protected me. He came and sat with me and just listened to me,” Britt told the New York Jewish Week. “He was really sensitive to that and established a boundary for me. It was a mature moment for him.”

At the wedding itself, Henoch gave a lively, entertaining and confident speech congratulating his sister and her husband Noam Weinreich, his parents said.

The siblings were at SAR together from 2018-2022 — Divi as a student and Britt as a ninth grade math teacher. Their mother, Aviva, would drive the two to school together, and during her first year of teaching, Divi poked fun at her (and encouraged heckling among his friends) by holding a sign up to the classroom windows that read, “Her mom still drives her to school.”

Josh Brody, Henoch’s best friend, neighbor and classmate, deeply admired Henoch’s leadership and quiet wisdom. During Brody’s first time snowboarding in Vermont with Henoch and Avi, Henoch stayed with Brody the entire day teaching him the basics. “For hours, Divi accompanied me on the bunny slopes despite my constant failures and the slope clearly bored him as it was much below his skill level,” Brody said.

“I always looked up to Divi,” he added, and the two shared memories of biking, hiking, boating, driving, traveling and attending Yankees games together. “Every Shabbos we would spend hours together in the Riverdale Jewish Center talking, laughing, and playing games,” he said, referring to a local synagogue. “Together, Divi and I would talk, sing, dance, and play sports with anyone who cared to join us, for all kinds of time.”

Henoch was active in his Jewish community and loved leading services and reading Torah at RJC, according to Rabbi Binyamin Krauss, the principal of SAR Academy. He believed in learning Torah and engaging in the world, and “he died exploring the world,” Rabbi Krauss said.

Parents and friends said Divi, a successful student in math and science, encouraged his friends to pursue activities and interests that felt right to them, whether it was academics, sports or working with their hands.

“Divi always challenged me to improve. He was open to anyone and everyone’s ways no matter how mild or extreme. He was persuasive but not interested in imposing his ways on others. Divi strongly believed everyone has their own path and way of life,” Brody said. “He was as fearless as it gets and never once was he afraid to be himself.”

“He was the sort of kid that was not afraid to do his own thing,” and encouraged his friends to do the same, his sister Britt said. “If he wanted to do something, he would do it.”

Henoch loved building things and problem-solving, skills he planned to hone while studying engineering.  For his senior year capstone project, Henoch learned how to use power tools to renovate a 70-year-old shed in his family’s driveway and build a clubhouse for himself. “He spent time on it every day” for the last few months, his father said.

“He was inspired to make the world better and get stuff done,” Rabbi Krauss said.

Henoch’s family held a funeral service Tuesday, July 12 at JFK Airport. He was buried the next day at Eretz HaChaim cemetery in Beit Shemesh, Israel, in a ceremony attended by hundreds in person and via a livestream.