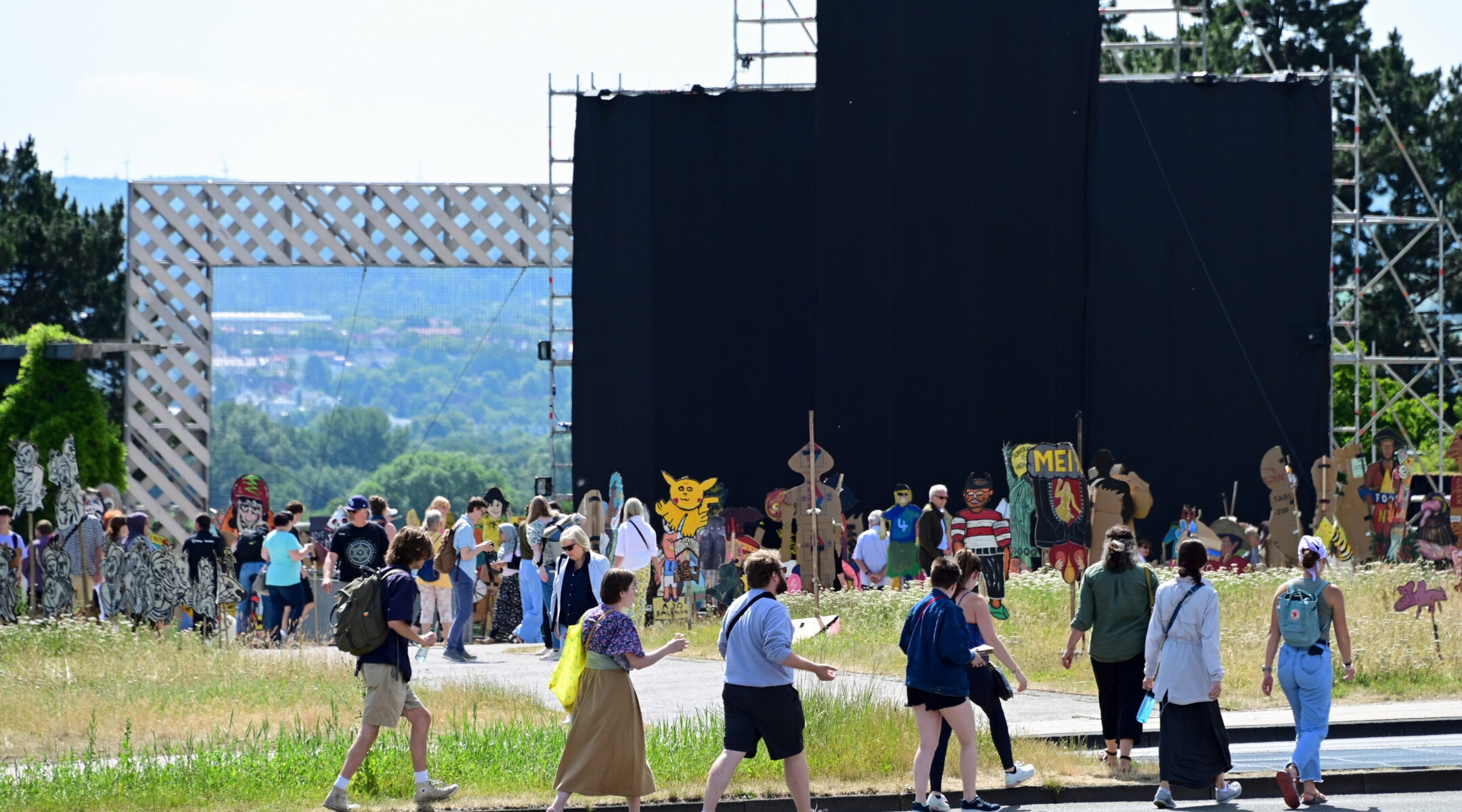 Art lovers look at the large painting "People's Justice" (2002) by the Indonesian collective Taring Padi, covered with black cloth, on Friedrichsplatz in Kassel, Germany, June 28, 2022. Several antisemitic motifs could be seen on the banner, prompting a debate about the show's handling of antisemitic content. (Uwe Zucchi/picture alliance via Getty Images)
Advertisement

(JTA) — The director of a major international art exhibition has resigned after a work that included caricatures of Jews and Israelis ignited a reckoning over antisemitism.

The scandal leaves Documenta — a sweeping, decentralized exhibition staged every five years in Kassel, Germany — on uncertain territory for the future. Documenta announced that the Anne Frank Education Center in Frankfurt, would review all of the work in the exhibition, but the center’s director said announced on Friday that the exhibition’s management had not supported the endeavor.

Sabine Schormann’s abrupt resignation 28 days into the 100-day exhibition was a direct result of her response to a controversial work by Indonesian artist collective Taring Padi, which followed other allegations of antisemitism against Documenta.

Called “People’s Justice,” the banner-like mural includes a depiction of a soldier as a pig wearing a scarf with a Star of David and a helmet emblazoned with the word “Mossad” — the name of Israel’s national intelligence agency. It also includes a man with sidelocks, fangs, a cigar and bloodshot eyes, wearing a black hat with the symbol of the SS, Nazi storm troopers.

The work was first shown in 2002 in Australia, according to ArtNews, and had been displayed several times since. This time, the caricatures drew shocked and angry responses from Jewish leaders at home and abroad, and from Israel’s embassy in Berlin, beginning shortly after the June 18 opening date. 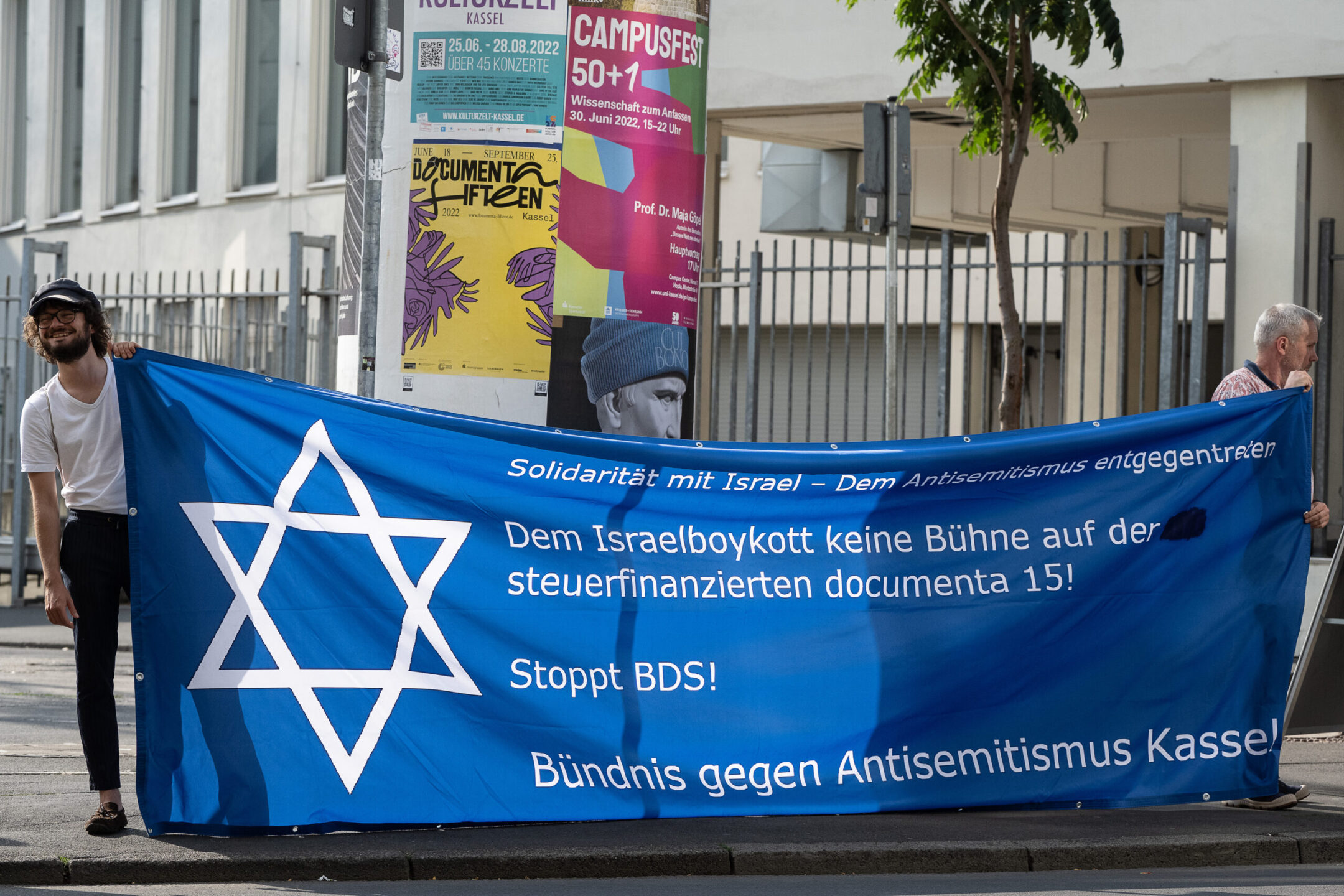 Demonstrators stand with a banner in front of the event hall before a panel event organized by the Anne Frank Educational Center and the Documenta art exhibition on the topic of “Anti-Semitism in Art,” Kassel, Germany, June 29, 2022. (Swen Pförtner/picture alliance via Getty Images)

Germany’s culture minister, Claudia Roth, had previously defended the exhibit but said in a statement that the mural “clearly has anti-Semitic elements,” and the prominent German artist Hito Steyerl withdrew her works from the event over the scandal.

Schormann had originally said she had no control over the exhibition’s curators, the Indonesian artists collective ruangrupa. She and Kassel Mayor Christian Geselle reportedly had turned down offers of an advisory committee on antisemitism in January, when critics were raising questions about why no Jewish artists from Israel were included in the exhibition, while artists who support boycotting Israel were included. (The movement to boycott Israel, known as BDS, is illegal in Germany; artists are among those to have protested the 2019 ban as quashing free speech.)

But after Documenta 15 opened, Schormann said in a statement that she and the curators concluded — as urged by the Documenta supervisory board — that they had not kept their promise to ensure that antisemitic content would not appear in the exhibition. She said offending sections of the mural were first covered with a black cloth before the entire piece was removed from the exhibition.

“I would like to emphasize once again that all those involved were and are deeply sorry for having crossed boundaries and hurt feelings. We also explicitly apologize for the fact that the antisemitic depictions were not recognized before the work was installed,” Schormann said in the June statement.

“Antisemitic depictions must have no place in Germany, not even in an art show with a global scope,” she added. 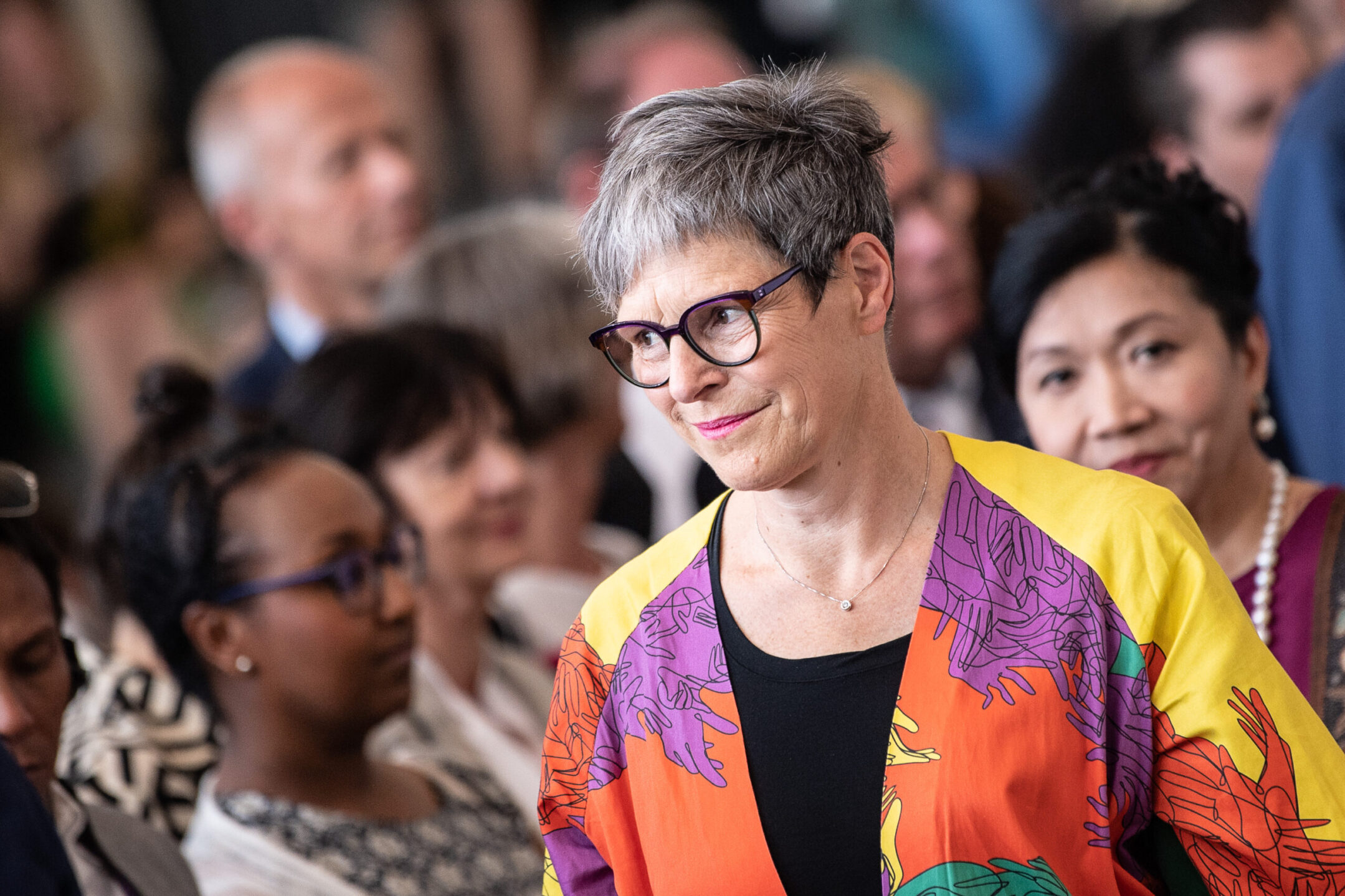 Sabine Schormann, general director of Documenta and the Museum Fridericianum, stands at the opening of Documenta 15, in Kassel, Germany, June 18, 2022. Schormann later resigned amid an antisemitism scandal. (Swen Pförtner/picture alliance via Getty Images)

The Taring Padi group also apologized that anyone had been hurt by elements of its mural. Those elements, the group said in a statement, were “not meant to be related in any way to antisemitism. … We are saddened that details in this banner are understood differently from its original purpose. We apologize for the hurt caused in this context.”

The draping and removal of the work turned it into “a monument of mourning for the impossibility of dialogue at this moment,” the statement continued. “This monument, we hope, will be the starting point for a new dialogue.”

What that dialogue could look like is growing increasingly unclear as the educational organization recruited to help Documenta review the rest of the sprawling exhibition has announced that it will not do so.

On Friday, Meron Mendel, director of Frankfurt’s Anne Frank Educational Center, announced he would no longer advise Documenta on issues related to antisemitism. He accused its directors of trying to use him as a fig leaf, as part of committee of advisors, and said they had not made artwork available to him for review.

One day later, Schormann’s departure after four years of leading Documenta was announced. According to German news reports, the exhibition’s shareholders and supervisory board all agreed to end her contract summarily on Saturday.