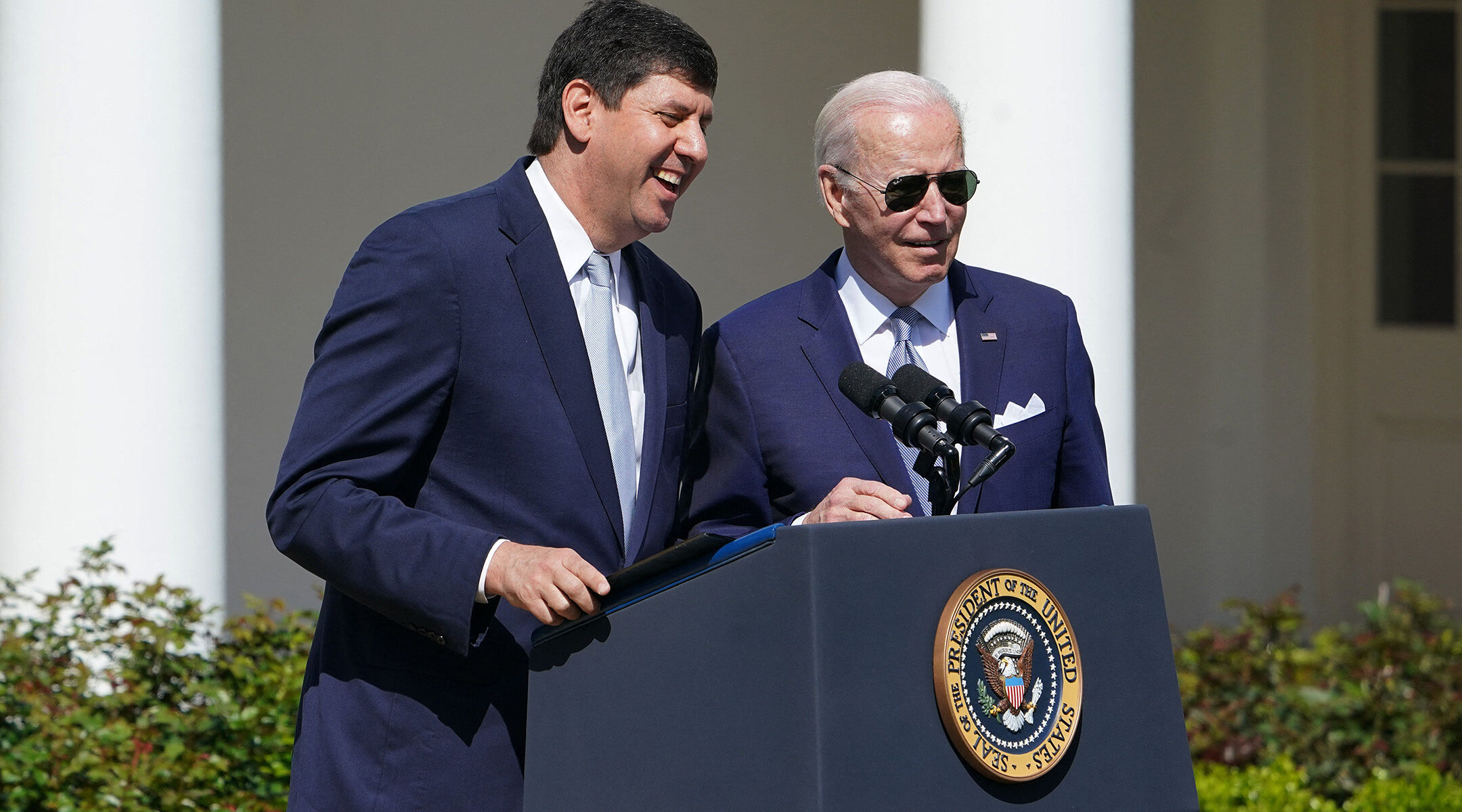 Steve Dettelbach, director of the Bureau of Alcohol, Tobacco, Firearms, and Explosives, being nominated for the position with President Joe Biden in the White House Rose Garden in Washington, D.C., April 11, 2022. (Mandel Ngan/AFP via Getty Images)
Advertisement

(JTA) – When Steve Dettelbach was confirmed last week as the director of the federal Bureau of Alcohol, Tobacco, Firearms and Explosives, he became the beleaguered bureau’s first head to pass a Senate confirmation in eight years. For some, the confirmation offered hope of a changing tide in America’s sea of mass shootings.

But a county Republican group in Kentucky saw a different story: that Dettelbach is part of a “Jewish junta” that “is getting stronger and more aggressive.”

The Bracken County Republican Party, representing a rural county with a population of around 8,400 along the Ohio River near Cincinnati, made the comment Friday on its official Facebook page, two days after Dettelbach’s July 12 confirmation.

In calling Dettelbach “a Jewish anti-gun activist,” the county GOP group attacked the two Republican senators, Susan Collins of Maine and Rob Portman of Ohio, who voted for his appointment. It also attacked two Republican Senators, Ben Sasse of Nebraska and James Risich of Idaho, who were not present for the vote, saying, “It’s obvious they want to move on from having to defend rural gun owners.”

The group deleted the comment from its Facebook page later that day, after being contacted by the Louisville Courier-Journal. The county’s GOP chair, Karin Kirkendol, did not respond to the paper’s questions about the post, but later signed a Facebook post from the group disavowing it.

“That post does not represent the values of the Bracken County Republican Party. It was incredibly insensitive,” she wrote. “We will investigate how this occurred and we commit to tighter oversight of our social media going forward.”

The next day Kirkendol told the newspaper that the Facebook page had been “hacked” and said the party “would not and did not publish anything antisemitic — as some of our very own members have Jewish heritage.”

That explanation didn’t cut it for the Community Relations Council of the Jewish Federation of the Bluegrass in Lexington, Kentucky. “We find the excuse that their account was ‘hacked’ to be wholly insufficient,” the federation wrote in a statement calling the post “ignorant” and “hateful.”

“If the Bracken County and Kentucky GOP are truly serious about their commitment to fighting antisemitism among their members, they will engage in genuine efforts to educate themselves, and offer more than a generic dismissal of the statements,” the federation continued, adding that it was “additionally shameful” that the comments were made in response to a new director for “a crucial government role in combating the epidemic of gun violence that plagues our country.”

The Cleveland chapter of the Anti-Defamation League, which includes Kentucky in its coverage area, criticized the post, saying on social media, “The perpetuation of antisemitic tropes at a time when antisemitism is on the rise is dangerous.”

The Kentucky Jewish Council, a new local Jewish group formed by Chabad of the Bluegrass director Rabbi Shlomo Litvin, also issued a statement saying the post “stems from a harmful and easily debunked conspiracy theory from the Protocols of the Elders of Zion and beyond that claims Jewish control of world politics.”

A former federal prosecutor and Ohio district attorney who unsuccessfully ran for state attorney general as a Democrat, Dettelbach invoked his Judaism during his confirmation hearing, saying that his experiences “raising Jewish children as a religious minority in this country” and witnessing attacks on synagogues and other sites of worship helped fuel his desire to combat gun violence and hate crimes in America.

The Justice Department bureau, which is charged with enforcing federal gun control laws including new ones recently signed by President Joe Biden, has for years faced a leadership vacuum, as well as a limited budget and resources for dealing with an expansive mandate. Gun control groups celebrated Dettelbach’s appointment, which Senate Democrats pushed through despite Republican resistance by using procedural rules to force to a vote.

Following the deadly 2017 Unite the Right white supremacist rally in Charlottesville, Virginia, Dettelbach authored an op-ed describing himself as “a proud American Jew.” He is a member of Park Synagogue in Cleveland Heights, Ohio, and sends his children to a Cleveland-area Jewish day school, according to the Cleveland Jewish News.

Leaders at Pittsburgh’s Tree of Life synagogue, the site of the 2018 mass shooting that was the deadliest ever antisemitic attack on American soil, endorsed his appointment. Gun control groups, including Everytown For Gun Safety and the Brady Campaign, also celebrated Dettelbach’s confirmation.

The confirmation hearings unfolded amid several prominent mass shootings, including a white supremacist targeting a supermarket in Buffalo, New York; a teenager targeting an elementary school in Uvalde, Texas; and a man targeting a Fourth of July parade in the heavily Jewish suburb of Highland Park, Illinois.

A week before Dettelbach was confirmed, police in Youngstown, Ohio, said they arrested a teenager who had recorded a video announcing his plans to attack a synagogue with two handguns and over 100 rounds of ammunition.