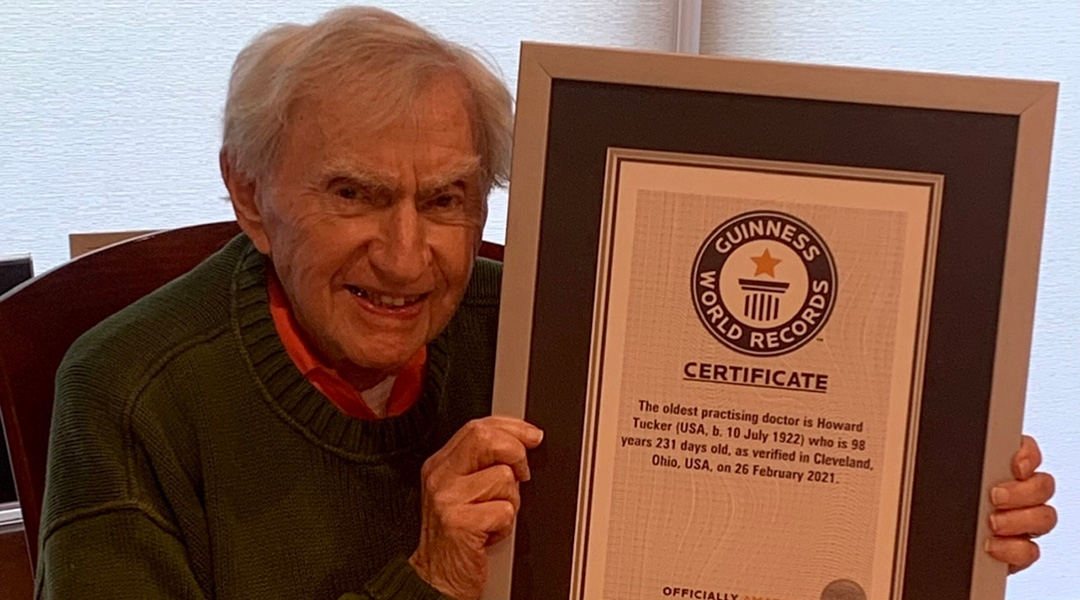 (Cleveland Jewish News via JTA) — The day after his 100th birthday on July 10, Dr. Howard Tucker headed downtown to throw out the ceremonial first pitch at the Cleveland Guardians baseball game.

“I just hope I can get the ball to the plate,” Tucker said beforehand with a laugh. “I’ve been practicing.”

Tucker has a solid track record around practicing — certainly when it comes to medicine. Last year, the Guinness Book of World Records verified the Cleveland Heights, Ohio, resident as the world’s oldest practicing doctor. He still teaches medical residents at St. Vincent Charity Medical Center in Cleveland and takes on medical-legal expert witness work in his spare time. One of his 10 grandchildren, Austin Tucker, is currently producing a documentary about his life titled, “What’s Next?”

“I have to keep doing things because I can’t stand being at home,” Tucker said. “As long as people accept me, I’m going to continue to practice. I enjoy myself.” 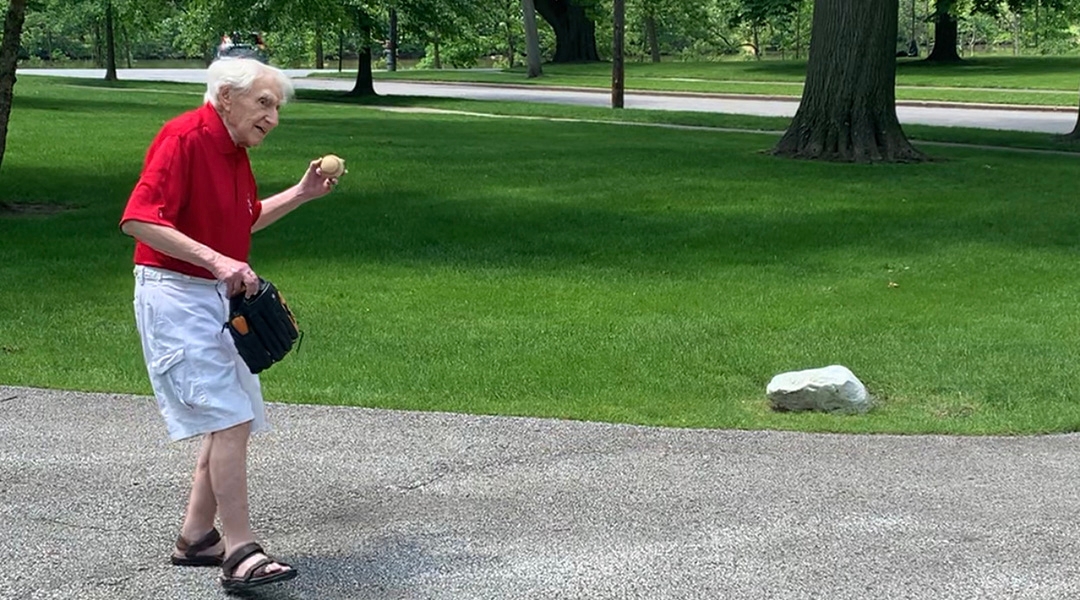 Born in 1922, Tucker knew he wanted to pursue a career in medicine while a student at Cleveland Heights High School.

“In those days, neurology was a truly intellectual pursuit,” said Tucker. “There’s something mysterious about the brain. There’s a mystique. That’s why I went into neurology.”

After graduating from high school in 1940, Tucker attended The Ohio State University in Columbus for his undergraduate degree and then medical school. Once his training was completed in 1947, Tucker served as chief neurologist for the Atlantic fleet at a U.S. Naval Hospital in Philadelphia during the Korean War.

“Anyone who was discharged from the Navy for neurological reasons, if his residence was east of the Mississippi, I had to examine him before he could be discharged,” Tucker recalled.

After the war, Tucker trained at the Neurological Institute of New York. He remembers his “remarkable training” at the institute, which featured 14 floors of all things related to neurology and psychiatry.

“My chief at the Cleveland Clinic had said to me, ‘You’re capable of learning more than I can teach you, so I want you to apply to the Neurological Institute of New York. It made all the difference in the world. It was a great experience,” Tucker said.

Not only did the institute play a pivotal role in Tucker’s medical career, but it also was where he met his wife, Sara, who at 88 is a practicing psychiatrist. The couple are active members of Park Synagogue, a Conservative congregation in Cleveland Heights.

“At the time, I was teaching third-year medical students,” Tucker recalled. “One day I said to myself, ‘That’s a cute-looking girl.’ Six months later, I saw her on the street and we started talking, and that’s how I got married. I’m very lucky.”

Dr. Howard Tucker and his grandson Austin Tucker, who is making a documentary about his grandfather, talk in synagogue together. (Courtesy “What’s Next?” movie)

Tucker has witnessed many advances over the course of his career, both in medicine and in technology. The CAT scan, for instance, hadn’t yet been invented when Tucker began practicing neurology.

Not one to stay idle for too long, Tucker decided to attend Cleveland-Marshall College of Law at Cleveland State University after serving as an expert witness in a case. He found the legal system exciting and said he was determined to stay in law school and finish his degree — all while continuing to practice medicine. He graduated and passed the Ohio Bar Examination at 67 years old.

Austin Tucker and Taylor Taglianetti, the director/producer of “What’s Next?”, hope the film about Tucker will show the inspiring power of older generations — and the challenges that Tucker has overcome to stay relevant in a changing medical profession. They said they consider Austin’s grandfather a “prime example of what just one person can do to change the world.” 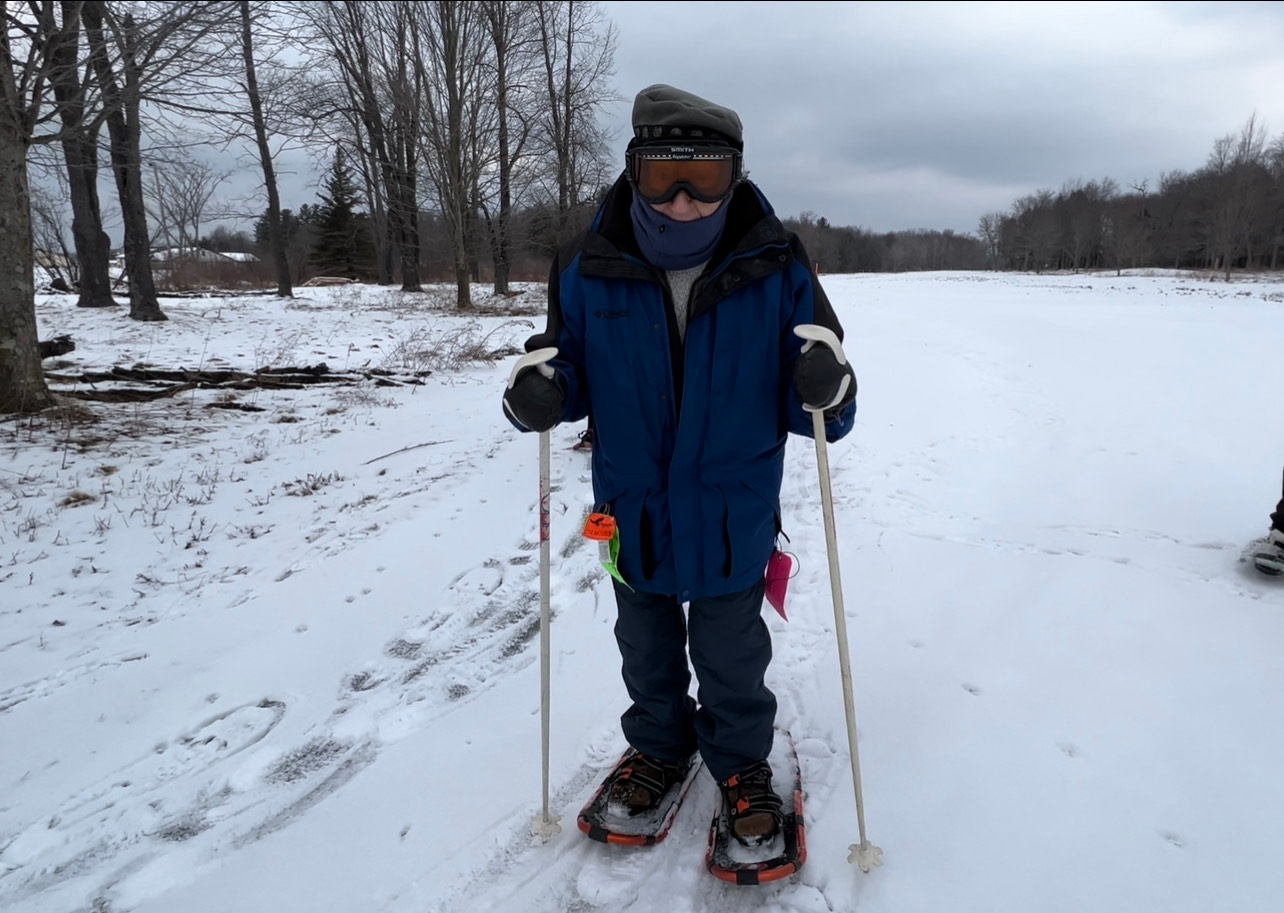 For his part, Tucker — whose mother died at 84, and whose father lived to be nearly 96 — always has his eyes on the future. He learned it from his parents.

This story was originally published in the Cleveland Jewish News, and is reprinted with permission.