Tbilisi’s Jewish community is dwindling. Could an interfaith Peace Cathedral help save it? 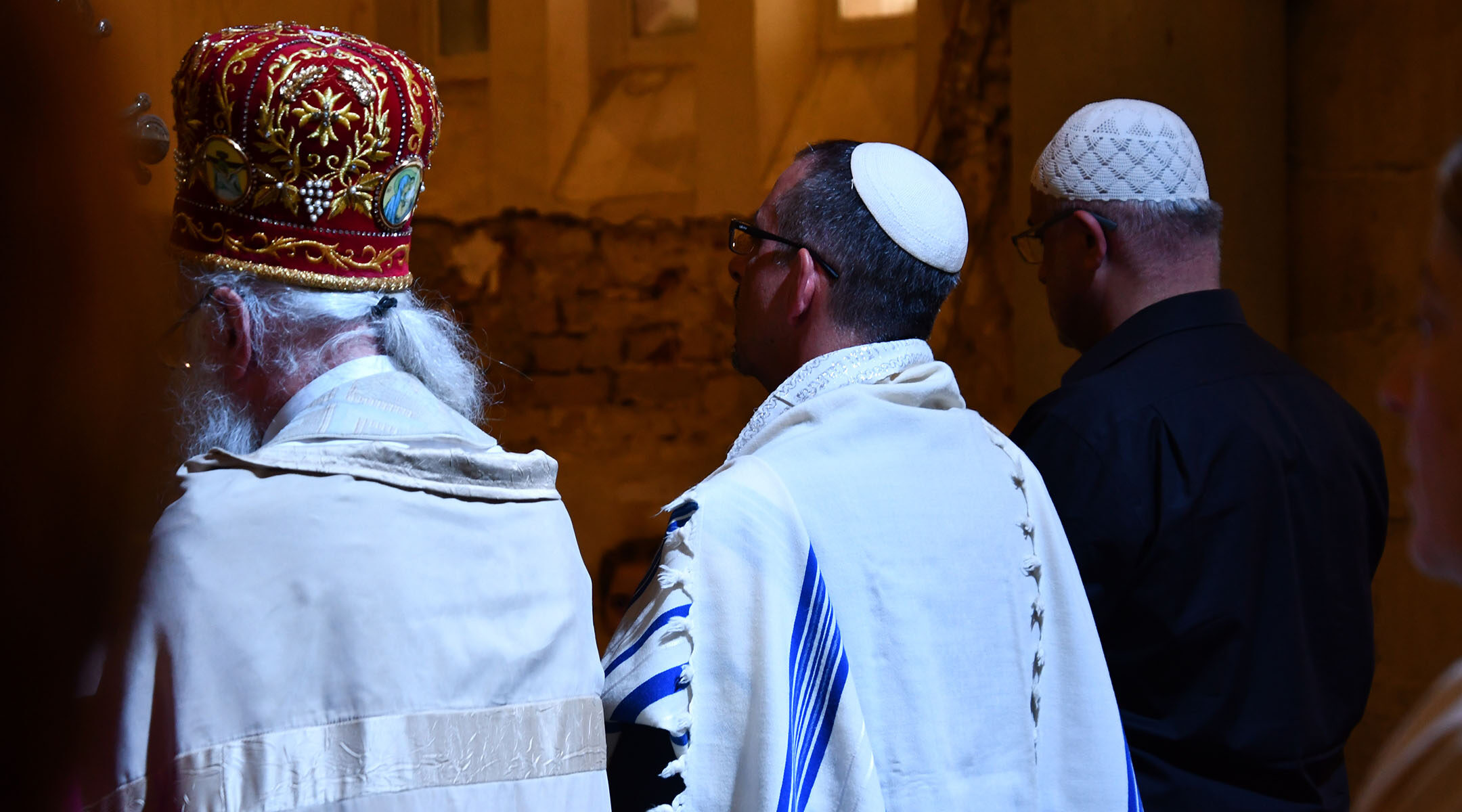 The Peace Cathedral in Tbilisi houses a church, synagogue and mosque in a former warehouse. (Nano Saralishvili)
Advertisement

TBILISI, Georgia (JTA) — A shofar blast, church bells and a Muslim call to prayer opened the Sunday service at the Peace Cathedral in Tbilisi, Georgia on a warm June day.

There was incense, ritual fire and sermons from a rabbi, a pastor and an imam. The service closed with the inauguration of a Torah, just arrived from Haifa, in the synagogue, one of three houses of worship under one roof in an idealistic, perhaps quixotic experiment in interfaith cooperation.

That was the climax of a remarkable weekend for the nondescript former warehouse that now houses the Peace Cathedral. The first services were held in both the mosque, Masjid as Salaam, and the synagogue, Beit Knesset HaShalom.

At a moment of rising anti-Semitism and Islamophobia in Georgia, the Peace Cathedral stands as a symbol of possibility. Sometimes called the Peace Project, it is Bishop Malkhaz Songulashvili’s answer to a series of antisemitic, anti-Muslim and homophobic incidents from 2013-2015 in this former Soviet republic.

Songulashvili, Metropolitan Bishop of the Evangelical Baptist Church of Georgia and professor of comparative theology at Ilia State University in Tbilisi, calls it his way of “responding to ugliness with beauty.” He has transformed his church into a building housing worship spaces for all three Abrahamic faiths. In addition to the mosque, synagogue and church, there is a space for interfaith dialogue, as well as an interfaith library for children and adults.

“Through our fellowship…it is my hope that we will learn from each other’s spiritual experiences as we push each other to broaden our understanding of being human, being believers, and being members of this fine planet,” Songulashvili said.

At the same time, it is providing a space for Tbilisi’s fledgling liberal Jewish community.

“It is really hard here to find something if you are interested in Judaism, other than Chabad and the [Orthodox] synagogues,” said Veronika Ferdman, who is involved in a variety of Jewish organizations in Tbilisi, where she is a student. 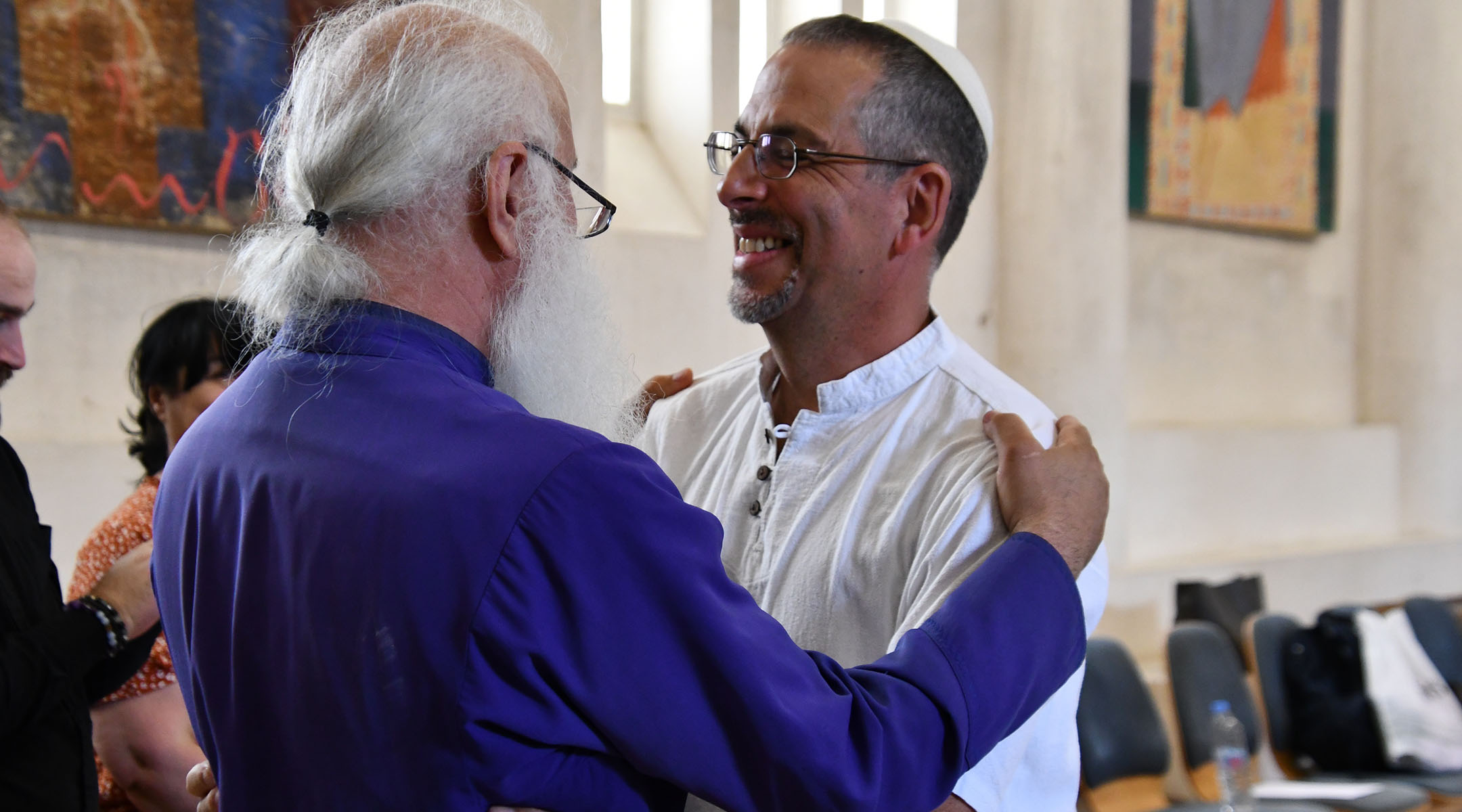 The Jewish community in Georgia dates back 2,600 years. Rich and layered, it is currently fractured and dwindling, as Jews have emigrated in waves to Israel since the 1970s. Although the Jewish population once numbered 80,000, with five synagogues in Tbilisi alone, there are now about 3,000 Jews left in Georgia, and the synagogue community is increasingly frail and elderly.

The emerging non-Orthodox community, led by young Georgians and some expatriates from England and the United States, has not been accepted by the two remaining Orthodox congregations or the local Chabad — the outpost of the worldwide Hasidic movement. The Orthodox community did not participate in the inauguration of the Peace Cathedral Torah and has not engaged with Songulashvili’s work.

At the crossroads of Europe and Asia, bordered by the Caucasus Mountains and the Caspian Sea, Georgia has withstood constant threat of invasion for its strategic location by Mongols, Ottomans, Persians, Russians and others. Like Ukraine, Georgia has European Union and NATO aspirations, and it is watching Russia’s invasion of Ukraine with trepidation.

According to popular belief, Jews arrived in Georgia in the sixth century BCE, after the fall of the first temple. Jews figure prominently in the Georgian Orthodox church’s founding legend, which centers on the arrival of Christianity to the region through a Jewish woman. Neither Ashkenazi nor Sephardic, they are proudly Georgian, with their own traditions and customs. Sephardic influences arrived much later, through the Ottoman Empire in the 17th century, and Ashkenazi Jews from Russia came only in the 19th century. 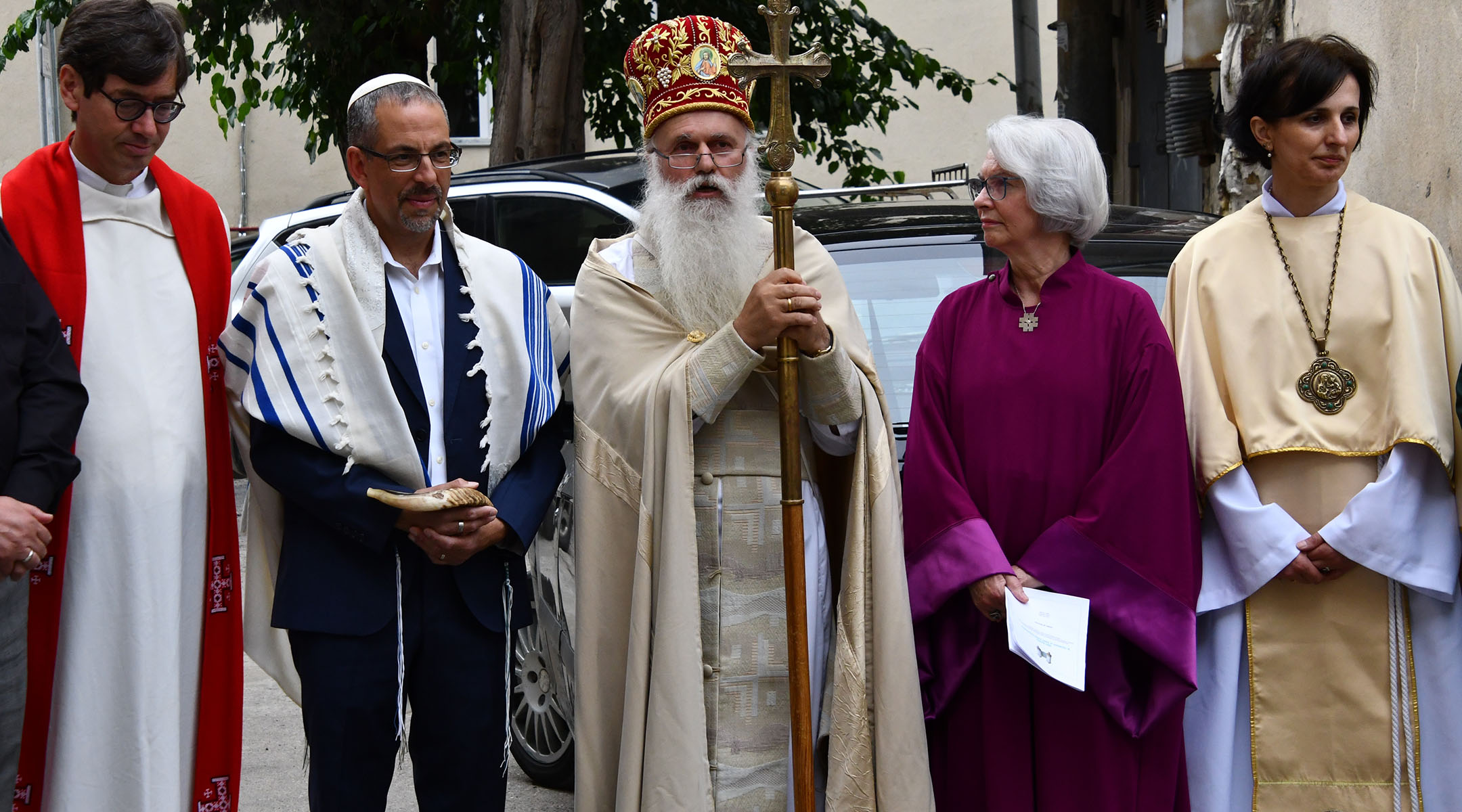 Clergy from the Peace Cathedral and its inspirations, including the House of One in Berlin, seen outside the complex in Tbilisi. (Nano Saralishvili)

Georgians take pride in their embrace of the country’s Jewish community and celebrate a history notable for its absence of ugly outbursts of antisemitic violence that are common in the region. But Ran Gidor, whose term as the Israeli ambassador to Georgia ended at the beginning of July, worries that rising antisemitism in Georgia may put an end to the cozy relationship Jews have shared with their neighbors.

In 2013, hooligans broke up a Hanukkah menorah lighting in a public square. Witnesses to a 2018 murder of a Georgian Jewish human rights activist recall antisemitic slurs being shouted by the attackers. Jewish children no longer feel comfortable walking around wearing kippahs, he said, and in the last two years, senior clergy in the Georgian Orthodox church – the country’s dominant religion — have delivered what Gidor called “blatantly antisemitic sermons” and uploaded them to YouTube.

While he doesn’t think the problem is unmanageable at the moment, “If the trajectory is sustained, then it will be an issue in 10 years’ time.”

Gidor has called Songulashvili’s project “brave,” and during his tenure, the Israeli embassy has helped financially support the Peace Cathedral.

Established in 1867 as the First Baptist Church of Tbilisi, the Peace Cathedral serves as the mother church of the Evangelical Baptist Church of Georgia. Under the leadership of Songulashvili, it has repeatedly taken unpopular stands in support of women and oppressed minorities that have led to harassment and worse. He has ordained women to serve as deacons, ministers and bishops, and he has provided hospitality and refuge to Muslim communities. He also embraces the LGBTQ+ community in a country where that support can be a death sentence.

His views have come at a cost. Songulashvili, once archbishop of Georgia’s Baptist Church, was demoted in 2013 to Metropolitan Bishop of Tbilisi because of his stand against homophobia and Islamophobia.

In his trademark sandals, with a long white beard and hair pulled back in a ponytail, the bishop bears a striking resemblance to Dumbledore, the avuncular wizard in the Harry Potter films. He calls himself “crazy” for the positions he takes and seeks out like-minded “crazy people.” He was thrilled to find a pastor in Germany, Gregor Hohberg, who pioneered a similar model, known as The House of One, in Berlin in 2011, with Muslim and Jewish partners. 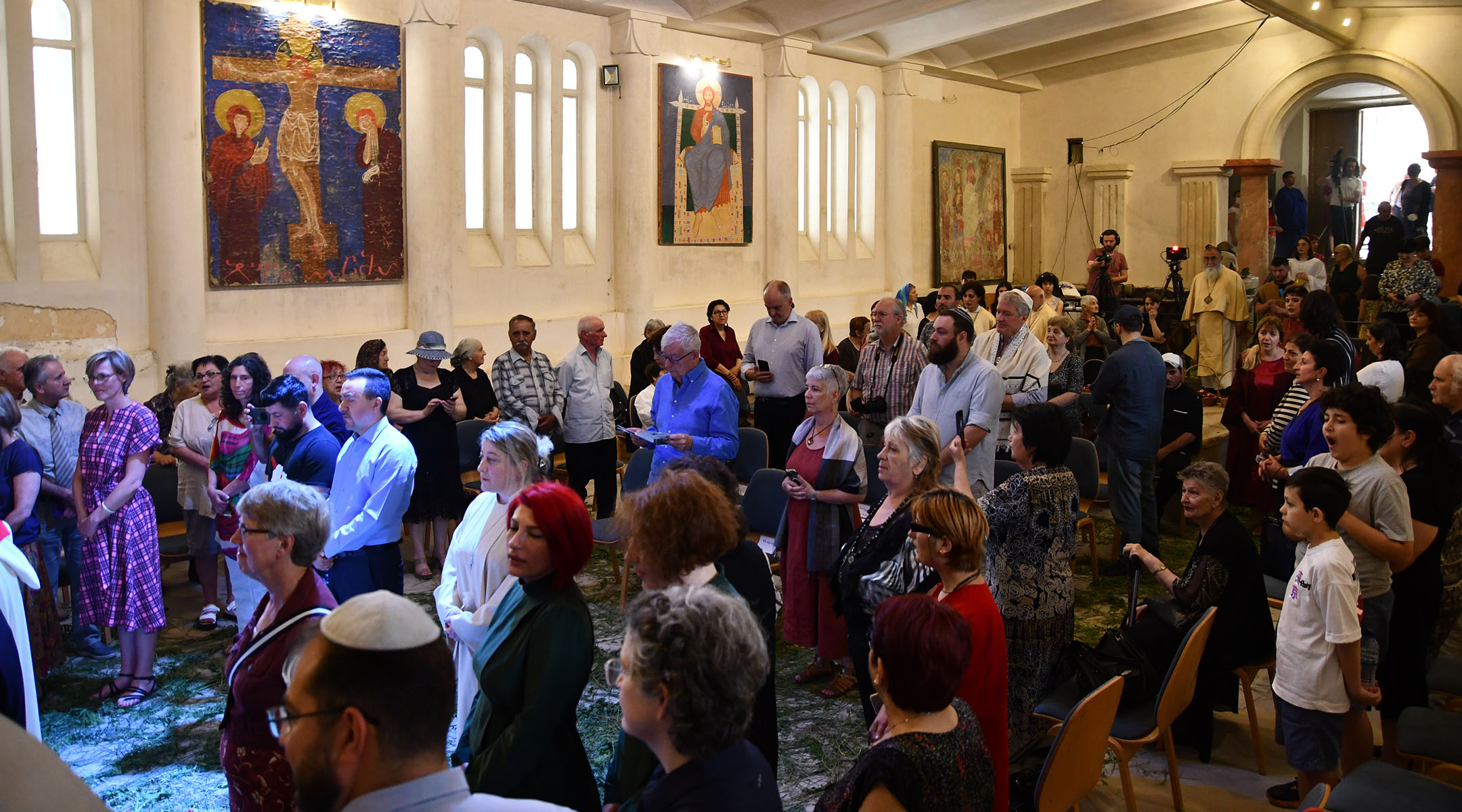 People gather at the Peace Cathedral in Tbilisi prior to the inauguration of a Torah scroll. (Nano Saralishvili)

“What we are witnessing is no simple act,” said Ben-Chorin, referring to the Peace Cathedral during his sermon. “It is a vision of a better world.”

Lela Tsitsuashvili is among those working to preserve Georgia’s Jewish legacy. A curator at the National Gallery in Tbilisi trained at the State Hermitage Museum in Russia (one of the largest art museums in the world) and a Georgian Jew raised during the Soviet era, she is distinctly qualified for the job. She wrote her dissertation on the Jewish Georgian Shalom Kobashvili, a self-taught artist who painted memories of the Jewish community from his childhood. Now, she is preserving what is left.

She is one of six caretakers, or shamashim, of the Torah at Beit Knesset HaShalom in the Peace Cathedral. Together, they are now working to write a charter for the synagogue, determining how it will be used.

“It’s an incredible opportunity to be part of this miracle,” said Tsitsuashvili, who also participated in the Havdalah service ending Shabbat the night before the Torah was inaugurated — the first such service to be held in the synagogue. Her family attended Orthodox synagogues on holidays. “It’s a dream to be part of such an unusual model.”

Another of the shamashim is Keti Chikviladze, who like many young people in Georgia lost her connection to her family’s Jewish traditions during the decades of Soviet repression. Her maternal great-grandfather was a Georgian rabbi, but he and her great grandmother died in the Holodomor, or Great Famine, of the early 1930s, a catastrophe engineered by Stalin. Chikviladze knew little about her past until she participated in a Taglit-Birthright Israel trip and had her first taste of Jewish customs, rituals and practice.

Today, she is the director of Hillel Tbilisi and like Tsitsuashvili feels she has a mission in the Jewish community of Georgia. She plans to stay rather than move to Israel, as most of her Jewish peers are doing. Until the creation of the Peace Cathedral, the local chapter of Hillel International — which runs hubs for young Jews at American universities and in cities around the world — has been one of the few avenues of Jewish expression for those who might not meet the definitions Jewish identity under the halacha, or Jewish law, followed by the Orthodox congregations.

A week before the Torah arrived, a group of students had gathered at Lake Lisi overlooking the capital. Rounds of khachapuri, a classic Georgian flaky pastry filled with cheese, was set out picnic style along with beverages. After some hanging out, they formed a circle among the trees for a musical havdalah service, led by Keti and her husband, Misha Grishashvili, with their young son and daughter in tow. They concluded, as Jews do around the world, with greetings of Shavua Tov, “a good week,” sung in Hebrew, English and Georgian (“Ketili Kvira”) before hurrying to their cars as storm clouds threatened.

Among the students was Ferdman, whose grandfather worked for the Jewish Agency. She’s active in many Jewish organizations, and hopes that an influx of Jewish youth from Belarus and Ukraine – fleeing either war or Belarus’ authoritarian government — will help the Georgian liberal Jewish community organize itself more efficiently. She plans to go to Israel, but thinks she will eventually come back to Georgia. 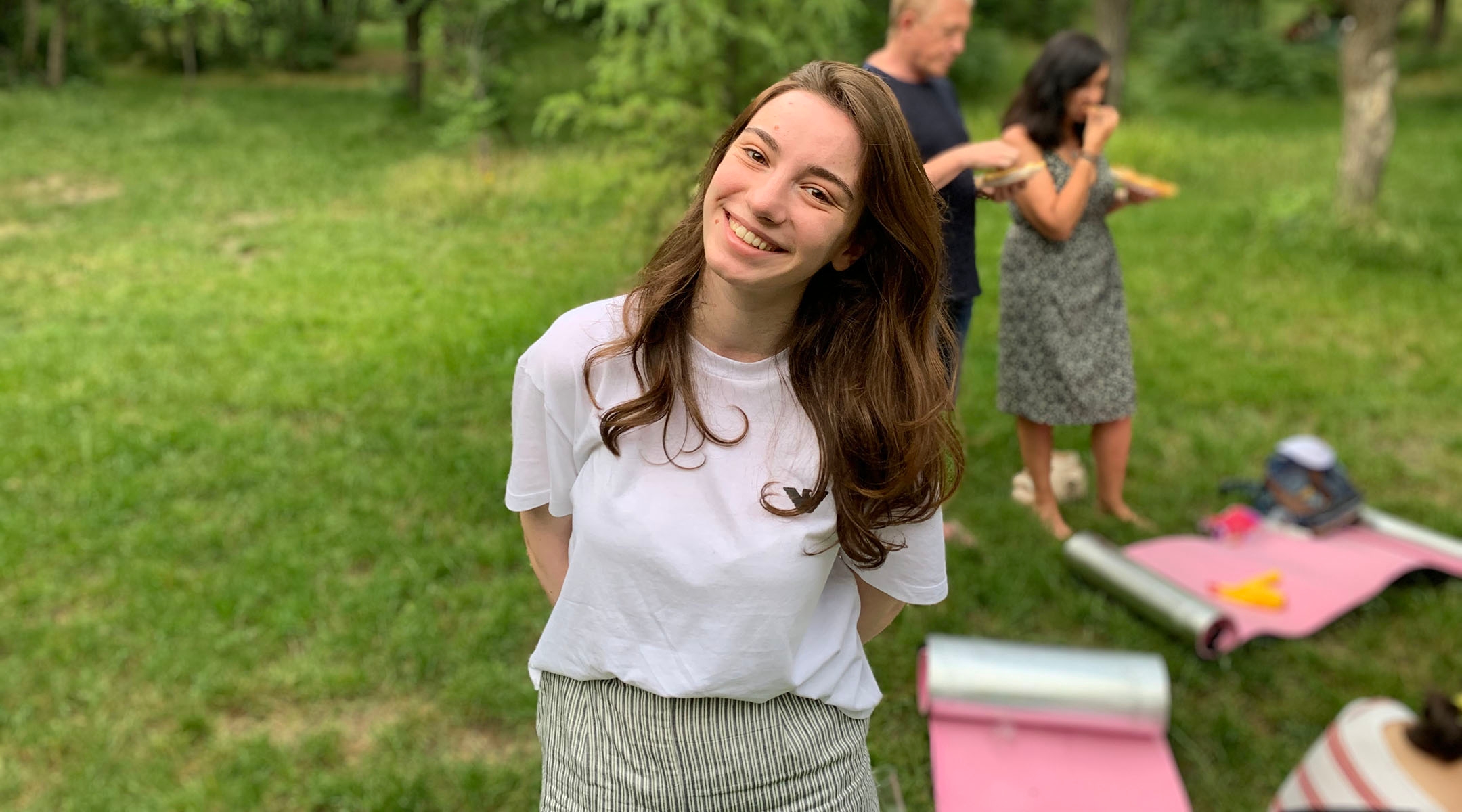 Ferdman is hopeful for but wary of Songulashvili’s project and worries about what it will do to the fabric of the local Jewish community. “We will see,” is all she would say.

As the Sunday service in the church neared its conclusion, the doors of the cathedral opened. The Torah was on a table just outside, under a prayer shawl held by the shamashim. Ben-Chorin chanted several verses, and then withdrew the scroll from its metallic Sephardic case. The shamashim carried the scroll in a procession through the church, past the mosque and into the synagogue, while the case passed among the broader community. For some of the Christians and Muslims in attendance, it was the first time they had ever seen a Torah.

“This whole ceremony -— it was like a dream you wanted not to awake [from]. It went directly to the soul,” said Mustafa Shahin, a Muslim House of One supporter from Berlin who had never met a rabbi nor seen a Torah before. “We’re seeing all the different people share the same idea, Jews, Christians, and Muslims: peace.”

Ted Jonas, one of the shamashim, an expatriate from Atlanta, Georgia, finds the project fascinating. “They’ve integrated or exposed themselves to other religions and realize they don’t have to be afraid,” he said after the service.

Salome Kumalashvili, a young Christian woman who attended the inauguration, said of the Peace Cathedral, “I think it’s amazing that people of different religions try to speak with each other and try to be friends.” But she acknowledged that Songulashvili is an outlier. “Well, Georgia is an Orthodox [Christian] country, and for most Georgians it is probably strange,” she said. “But I find it so kind.”

Even if parishioners fall away, Songulashvili will hold onto his principles, and his knowledge that “I am not the only crazy person out there.” He added, “I still have faith in God and faith in humanity. Without these, I don’t think I could continue to live in this country.”