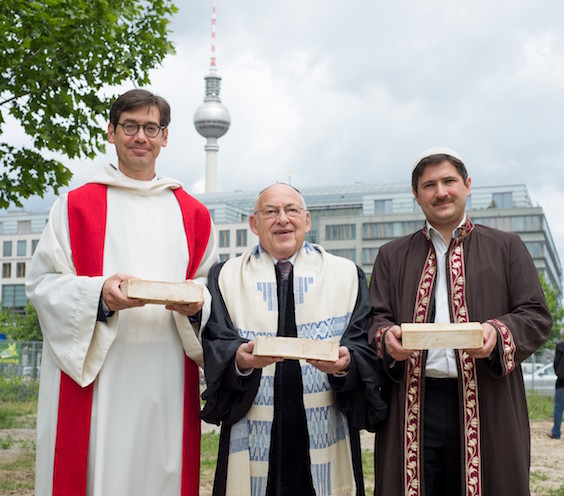 A priest, a rabbi, and an imam walk into a bar…

But actually, this isn’t a joke, or a bar. It’s an extraordinary new building called the House of One, which will combine a mosque, a synagogue and a church in Petriplatz, also known as “the medieval birthplace of Berlin.”

Yes, Berlin – as Rabbi Tovia Ben-Chorin says in House of One’s promotional video, “For me as a Jew, this city is ‘The City of Wounds’ and ‘The City of Miracles.’”

The House of One will welcome people of multiple faiths and hopefully mark a new era in religious tolerance. The three religious leaders spearheading the project are Rabbi Tovia Ben-Chorin, Pastor Gregor Hohberg, and Imam Kadir Sanci. The design team (picked through a competition) is from the Kuehn Malvezzi architectural firm, and they’ve already released some images of the proposed structure. There will be one door for everyone to walk through. From there, each worshipper may climb the stairs and choose one of three prayer spaces to enter.

Even the construction phase is about collaboration. Everyone is encouraged to donate a brick for ten euros a pop. The founders encourage everyone to get involved, and even invite people to send in suggestions for their calendar of events, which will include prayer, festivals, art, and debate.

Americans, relax: You’ll get one, too. NPR just reported that one of these is coming to Omaha, Nebraska, too: on the site of an old Jewish country club!