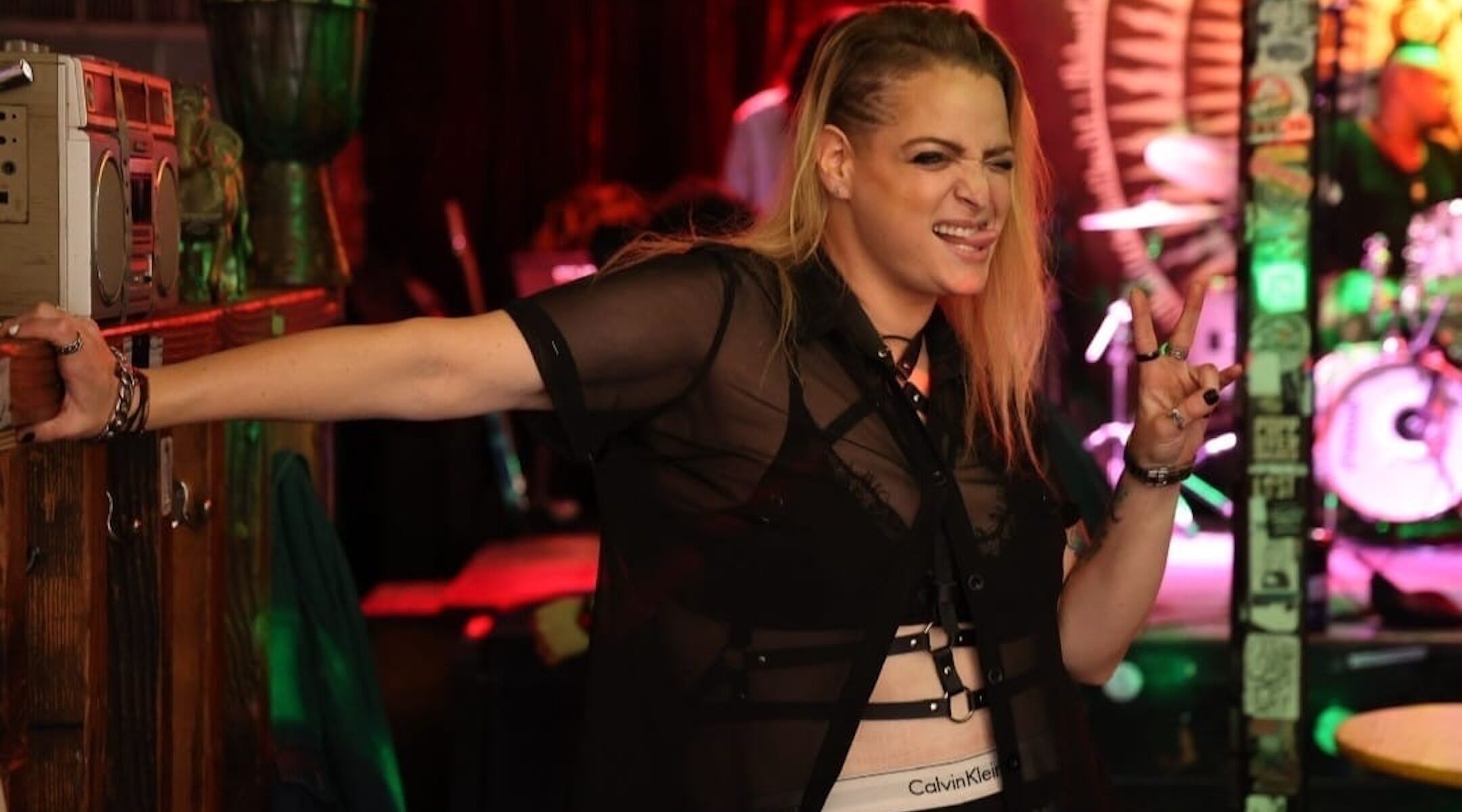 Comedian Leah Forster is part of the lineup for The Chosen Comedy Festival, a benefit for Ukraine relief taking place Aug. 16 at the Coney Island Amphitheater. (Courtesy)
Advertisement

(New York Jewish Week) — For nearly a decade beginning in 2006, comedian Leah Forster, who grew up in Borough Park, Brooklyn, was considered a trailblazer in the Hasidic community.  She toured the globe performing stand-up for female-only audiences while simultaneously working as a teacher at the religious Bais Yaakov high schools in Brooklyn.

But Forster struggled with living what she considered an inauthentic life, and grew frustrated by the barriers she faced doing stand-up for Hasidic audiences. “Every time I was hired for a job, I had to go through the same, ‘Please make sure you wear this on stage, and you refrain from saying this, and you don’t do this accent,’” Forster told the 18Forty podcast. “So I was definitely limited.”

After coming out as lesbian around 2014, she stopped doing comedy for a few years. And when she returned to the stage in 2017 — performing for both secular and Orthodox crowds — the transition wasn’t particularly smooth. Some in her old community rebuffed her new sexual identity, even though it wasn’t a large component in any of her material.

Then, in 2018, Forster’s scheduled New Year’s Eve comedy shows in New York made headlines: After learning she was a lesbian, rabbis threatened to pull kosher certifications from the venues that were hosting here. (The show still went on, at a different, unpublicized location.)

These days, Forster’s comedy remains uniquely Jewish. She leans heavily on her Borough Park background, which serves as inspiration for many characters, accents and impressions, which she shows off on stage and on her social media pages, where she has nearly 75,000 followers. Among her popular characters are the enterprising Baily, who pushes her various websites and schemes, and the fashionable Peshy, who has a love-hate relationship with her heimish community.

In addition to performing at mainstream comedy clubs around the city, Forster is a mom to a daughter from her first marriage and works day jobs in home health care and teaching.

On Aug. 16, Forster is on the bill at The Chosen Comedy Festival at the Coney Island Amphitheater, a benefit for Ukraine relief featuring Jewish comics and musicians. (The New York Jewish Week is the media partner for the event.) We caught up with Forster to discuss her evolution as a comedian and why she loves to make people laugh.

New York Jewish Week: Talk a little about your journey in comedy and how you got to where you are today. If you saw yourself 15 or 20 years ago, what would you think of yourself now?

Leah Forster: I have been doing comedy from the second I was born. When I was in high school, I was always cast in the funniest parts of the play. I was doing comedy back in my religious community my entire life. I was signed to our one label, and I put out three comedy albums. I put out about 10 DVDs, and I used to perform for thousands and thousands of people —  sold out crowds around the world. I was flown to Israel and to London and to all these cool, religious places.

It’s funny because the first time I performed with Elon [Gold] and Modi was on Hanukkah at The Comedy Cellar. [Both comedians are also performing at The Chosen Comedy Festival.] That was the first time I was ever at The Comedy Cellar. Modi messaged me and said “I’ll meet you at the Cellar.” I said, “What’s the address?” He responded, “You schmuck. Don’t tell anyone you don’t know the address of comedy.”

That’s how unfamiliar I was with mainstream comedy. I had only known comedy in my very religious circles and I was only performing for women. So that was an eye opener for me, but I have been performing since birth and this isn’t new for me. I always knew that I would be a comedian and I always knew that I would be making people laugh. I love making people laugh. It’s my favorite thing.

What was it like breaking out of the bubble of your audience base of Hasidic women to the greater New York City comedy community? Do you feel like people got your comedy or was there a learning curve for you and your audience?

I feel like it was a learning process for me, in terms of my niche. I used to run away from it. Once when I performed, Modi watched me, and he said, “You’re trying to cram too many funny jokes into your set. Instead, just give people what they came to see. They love you, they follow you on Instagram. Give them that.” That’s when I sort of leaned into embracing the fact that I do a million accents and I have my characters that people like. I have to remember to give people what they like. It’s a kind of like when you go to see an artist and they play their new songs, and you’re like, I’m here for the old stuff. Or DJs that try to play cool mixes when it’s you just want to dance. So I learned that when people buy tickets and they show up to see me, my goal is to get them what they want.

What are you looking forward to most during The Chosen Comedy Festival? Is there anyone in particular you’re excited about performing in a lineup with?

​​Honestly, I have no idea what I’m walking into. The kind of festivals that I’ve done are mostly party festivals, where I’m the headliner. So it ends up being a lot of people doing a lot of fun drugs and then I’d get up on stage and do comedy, which is always weird! But this is a comedy festival, so I’m assuming it will have a different vibe.

Off the top of my head, I know I’m excited to see Jessica Kirson, because I  adore her. Besides the fact that she’s gay, which I love, she’s super funny and weird. I like weird and I like funny. She is authentic and fun and lovable so I’m pumped.

Is there anything else you want to share about how you’re feeling about your career at the moment?

For me, this is a side hustle. It’s not a job. When it comes to my passion, I never want to look at it as a job. I take one gig a week, at best. If I’m doing something big, that’ll be my thing for the month. I never want it to become something that I’m obligated to do. I need to remind myself that it’s something I want to do. So that’s how I approach it. If it all goes away tomorrow, honestly, I don’t really give a shit at this point. I know it sounds terrible. But coming from the community I come from, where I was in an arranged marriage and all that stuff, I’ve lost a lot. Sometimes you have to lose a lot to realize what you really appreciate, and what I appreciate is making people laugh. What I hope I get to do for the rest of my life is continue to make people laugh. I love the sound of laughter. People go to shows to escape and to laugh. I go to perform and I bottle up their laughter and I take it home with me.

The New York Jewish Week is the media partner for The Chosen Comedy Festival. For tickets and information click here.