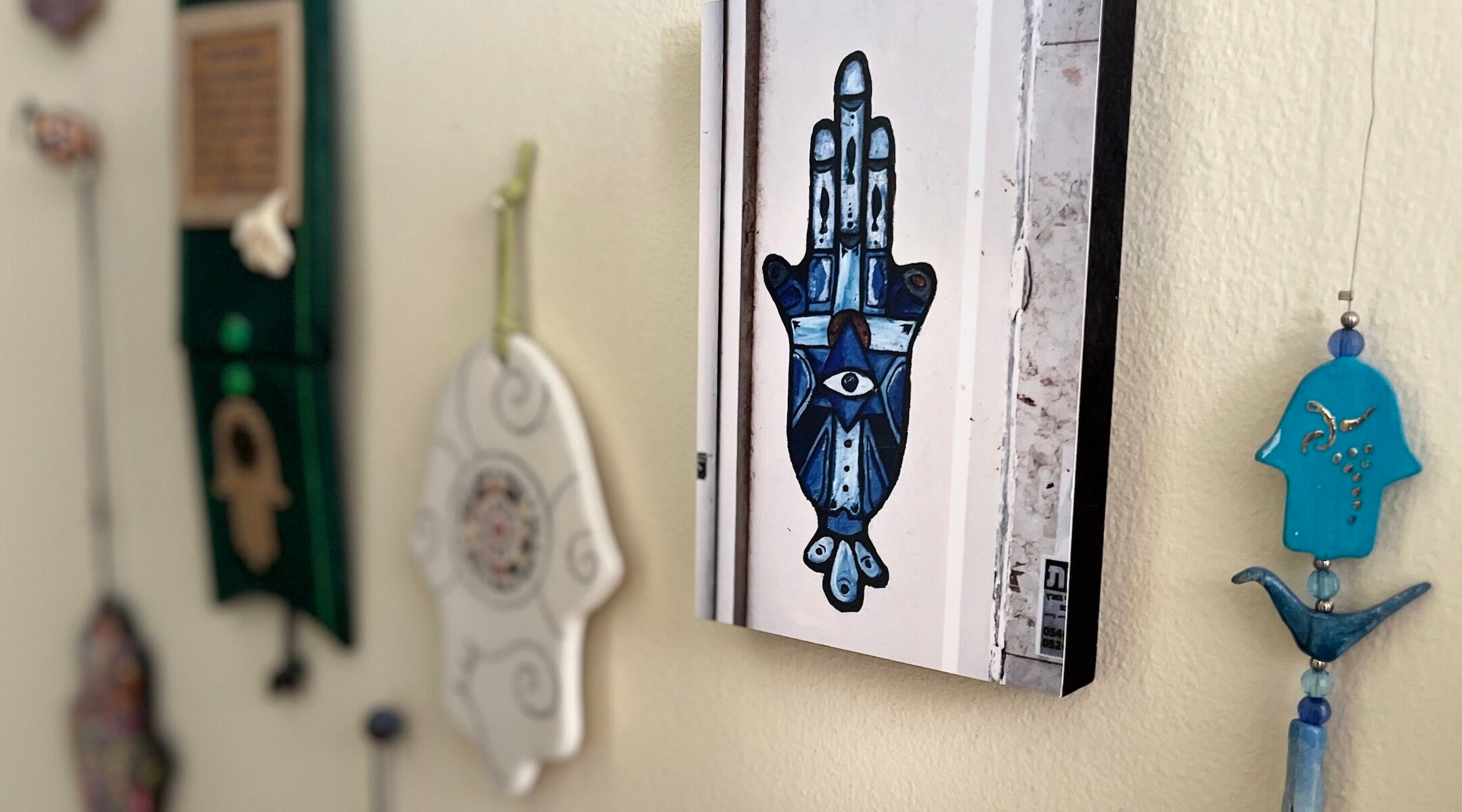 The hamsa is a blank canvas on which artists can project their own meanings, and the wearer their own statements. (New York Jewish Week)
Advertisement

(JTA) — I tend to get to Israel every two or three years, and every time I come home with a hamsa. The latest, which I picked up in May (along with a case of COVID — another story) is a lovely teal ceramic design from a workshop in the Golan Heights. We have a wall of these hand-shaped amulets in our house — less for good luck or spiritual karma than to advertise our connection to Israel.

But to advertise what, exactly? The hamsa’s Jewish roots are slightly tenuous, or at least secondhand. The “hand of Fatima” is a Muslim symbol, perhaps pagan before that, and possibly Christian. According to one interpretation, the five fingers are meant to represent the five pillars of Islam (faith, fasting, pilgrimage, prayer and tithing). Like a number of folk customs, it was absorbed into Sephardic Jewish culture in the lands where Jews and Muslims lived and worked side by side, and where it came to suggest the hand of God, or a talisman used to ward off the Evil Eye. I have hamsas with an eye motif worked into the palm of the hand, others with fish designs — Jewish symbols of both fertility and luck.

What they don’t have are overtly “Jewish” symbols: I avoid the ones with stars of David or menorah decorations. To some degree that’s my rebellion against Jewish kitsch — the gaudy, insistent aesthetic I associate with old-fashioned synagogue Judaica shops and well-meaning bar and bat mitzvah presents. I think it is also virtue-signaling on my part: The hamsa says I support the multicultural Israel that includes Jews and Arabs, Ashkenazim and Sephardim. “Cool” Jews like me don’t display exclusionary tchotchkes studded with Jewish stars or hang paintings of bearded dancing Hasids. (I mean, I have lots of Judaica with both — we just don’t put them on the top shelf.)

It’s the same sort of insidery, too-cool-for-shul aesthetic that I have long associated with the Wissotzky Magic Tea Chest. I am guessing you have seen this or even have one: It’s a wooden box filled with tea sachets from Wissotzky, the Tel Aviv-based company that has roots in tsarist Russia. Before it was widely available on Amazon, the tea box was a popular souvenir for repeat travelers to Israel.

At one point I started calling it the “first post-modern Israeli souvenir”: Instead of celebrating Zionism or Judaism, the box’s decorations feature imagery from the Indian subcontinent. The writing is Hebrew but the message is international. Maybe first-timers bring home olive-wood camels and gaudy mezuzahs shaped like the Jerusalem skyline. Old hands like me know that a box of supermarket tea, like that delicately filigreed hamsa, says the “real Israel.”

I know that’s putting a lot on a souvenir, and sometimes a hamsa is just a hamsa. But there is a whole field of scholarship that examines the deep meanings of everyday objects. Jenna Weissman Joselit, the doyenne of Jewish material culture, writes about how even Mordecai Kaplan, the influential 20th-century rabbi “not generally known for his interest in the material side of Jewish life,” counseled Jews to fill their homes with Jewish signifiers.

“Jewish appointments were intended to convey a moral statement that went far beyond the physical: Manifestations of group identity, they served as constant reminders of ideals and practices,” Joselit writes in her study of Jewish consumerism, “The Wonders of America.”

Besides, others are going to attach moral statements to your bric-a-brac that you may not even have intended. Search “hamsa” and one of the first things Google delivers is the question, “Is it disrespectful to wear a hamsa?” The answer comes from a jewelry seller, who advises, “it can be culturally insensitive to wear it without knowing what the symbol means.” Insensitive to whom is not clear, although presumably there are Jews and Muslims who object to seeing the symbol dangling from the wrists or necks of celebrities who are neither. At the very least, as one Mizrahi Jew has written, Ashkenazi Jews who embrace the hamsa as a symbol of Jewish or Zionist pride should be aware of and acknowledge its distinct meaning for Jews from the Middle East and North Africa.

I don’t think there was anything culturally insensitive about the artists who recently carved an elaborate hamsa into the sands at California’s Newport Beach. Or the Jewish environmental activist who places a clay hamsa along the shore of San Francisco Bay as an “offering to the water.”

I prefer to think of the hamsa as a wonderfully ecumenical symbol. The hand is a blank canvas on which artists can project their own meanings, and the wearer their own statements. My statement is a little smug (“You won’t catch me with a dancing rabbi on the wall”) but also extremely hopeful: The open hand celebrates Israel’s unlikely blend of cultures and faiths, even as it wards off those who refuse to accommodate coexistence.

What’s your most meaningful or interesting Jewish object? What does it say about your “ideals and practices”? Send pics and your thoughts to me at asc@jewishweek.org and I’ll try to feature them in a future column.