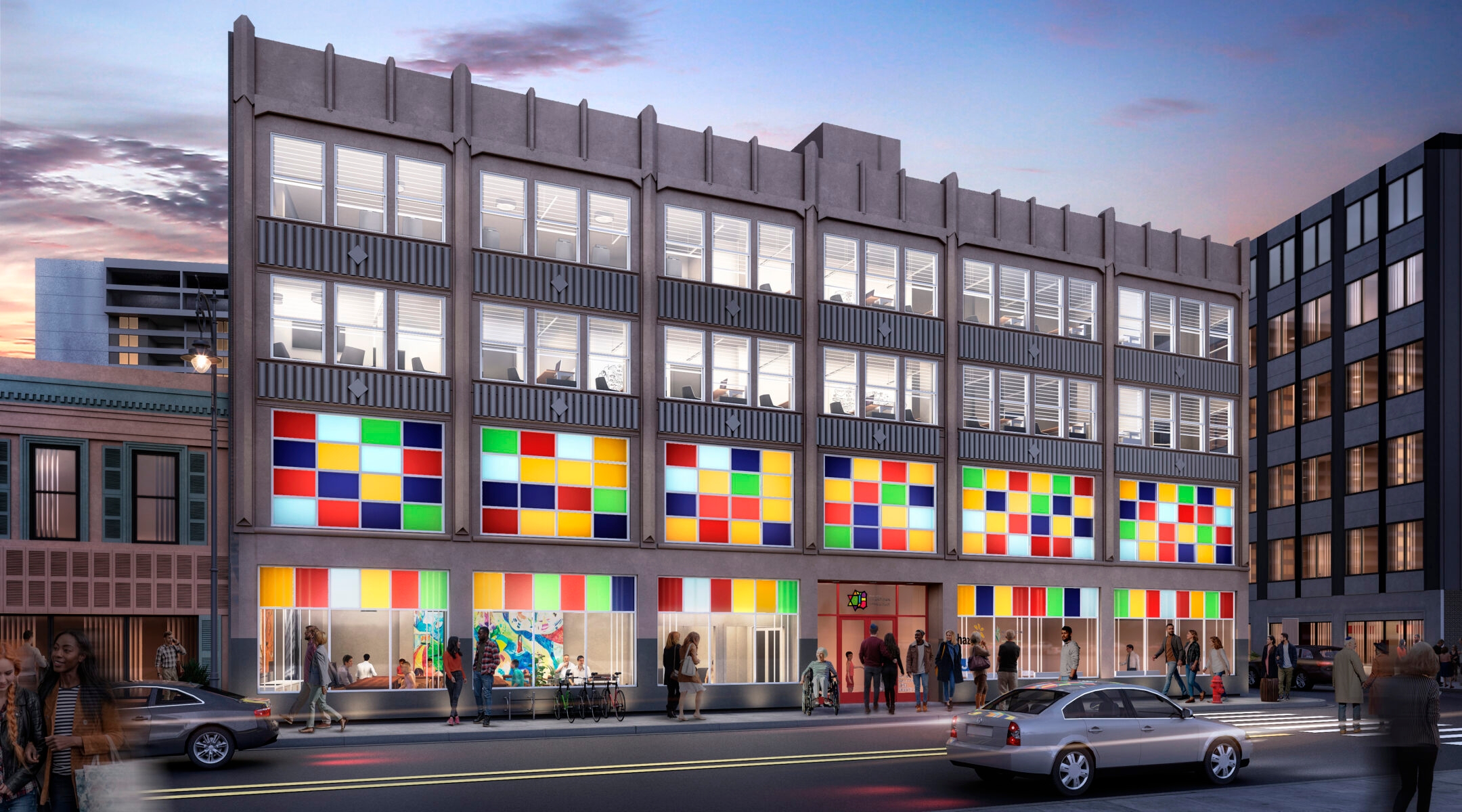 DETROIT (JTA) – Just off Woodward Avenue, the Motor City’s main thoroughfare crowded with high-end shops, sleek office buildings and a luxury hotel, a synagogue with multicolored stained-glass windows anchors a block of frozen-in-time real estate. An Old Detroit relic, it sits in stark contrast to the other heavily developed properties in the downtown corridor of this swiftly changing city.

On this sunny Sunday morning, a Yiddish singer belted out klezmer standards like “Tumbalalaika” and “Shein Vi Di Levone” on the block as a crowd enjoyed ice cream and popcorn. This shtetl in the city will soon see a major development of its own.

It was a special day for Detroit’s Jews: a centennial celebration of the only remaining freestanding synagogue in the city, which doubled as a groundbreaking for an ambitious expansion project. Many of the Jews in attendance at the Isaac Agree Downtown Synagogue’s block party weren’t even members, but all of them saw the congregation as an important link to Jewish Detroit’s past and future.

“I am so personally excited we made it to this day, hallelujah!” the synagogue’s rabbi, Ariana Silverman, said after reciting the Shehechiyanu prayer (which gives thanks for the moment).

Founded in 1921, the Isaac Agree Downtown Synagogue is today the last vestige of what, at the time, was a thriving Jewish community in an American industrial boomtown. But the nondenominational synagogue’s leadership is bullish that its best years are still ahead of it. A decade in the making, a $5 million-plus expansion project will turn the four-story building into a Jewish community hub, while accommodating a growing membership base. 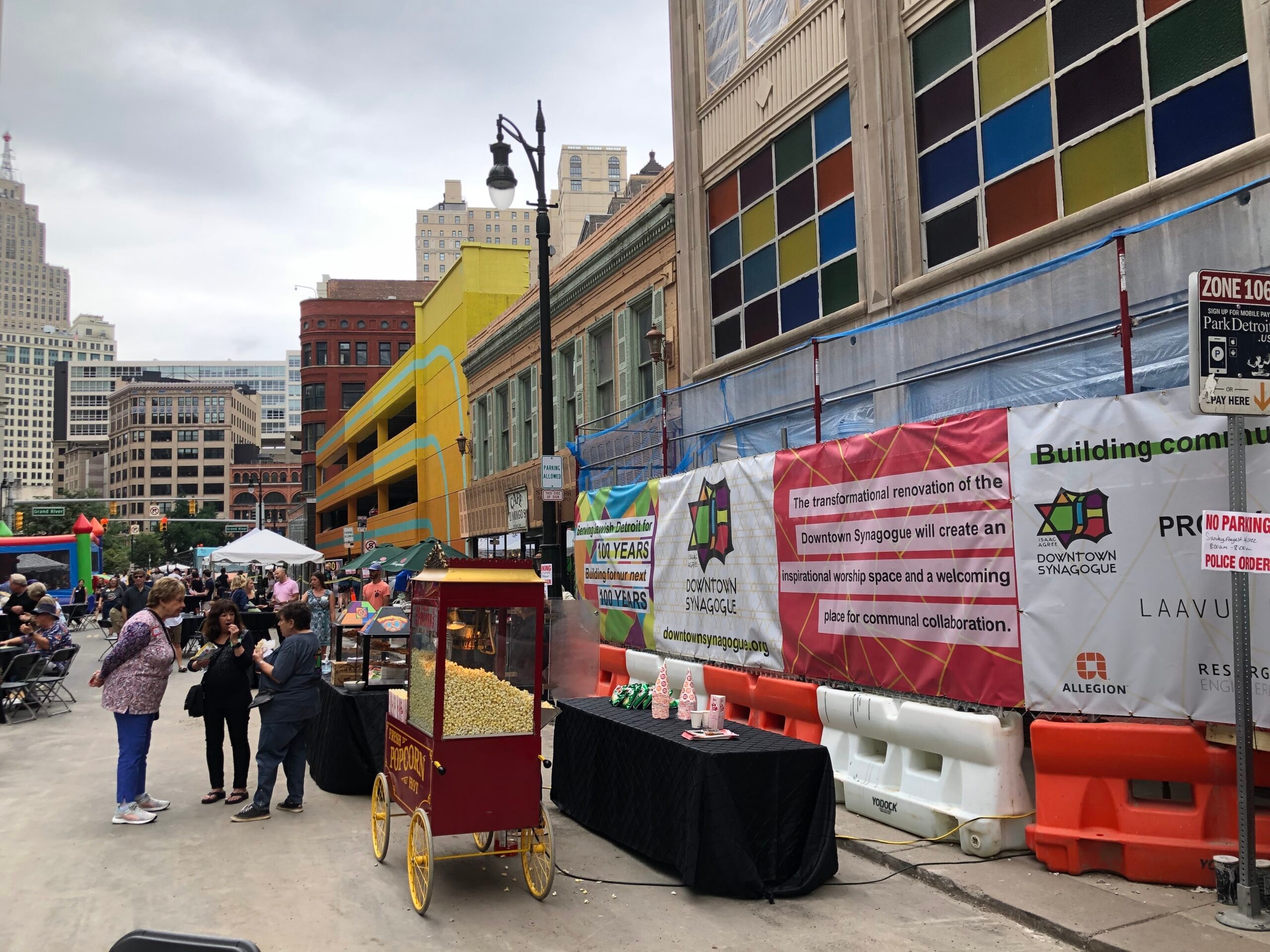 Crowds gather at a centennial block party for the Isaac Agree Downtown Synagogue in Detroit as the synagogue breaks ground on a major renovation project, Aug. 14, 2022. (Andrew Lapin/Jewish Telegraphic Agency)

“In the coming together to build and renovate a physical space, this has also been a very spiritual act, in a way similar to building the Temple in Biblical times,” Samantha Woll, the synagogue’s president, said in her address at the event.

In the period leading up to and in the decades following the Detroit riots of 1967, the Jewish community of metropolitan Detroit — like that of most major cities — underwent a mass migration to the suburbs. The dozens of Jewish houses of worship that once dotted the city became churches, or were abandoned by their members and fell into disrepair.

As the Downtown Synagogue continued its programming, for many years without a permanent rabbi, many of its members viewed their membership there as secondary, while also having a primary synagogue in the suburbs. They continued to support the downtown programming — including its free High Holiday services — out of a sense of historical preservation.

Matt Lester, president of the Jewish Federation of Metropolitan Detroit, summed up the state of affairs in his own address Sunday: “While many of our local buildings have moved multiple times throughout the years, the Downtown Synagogue has remained right here.”

But something has shifted in Detroit Jewry in recent years. In the early 2010s, as the Motor City lurched toward the largest municipal bankruptcy filing in American history, a growing number of young entrepreneurs and creatives — including many Jews — flocked there, attracted to its low cost of living and boundless potential for experimentation. Some discovered the Downtown Synagogue waiting for them, and its membership grew from fewer than 100 member families a decade ago to more than 400 today.

At some point, the congregation shifted from mostly old-timers to a mix of younger and older members, said Rachel Rudman, the synagogue’s executive director. These younger members began to push for the synagogue to look ahead and, at the pivotal 2009 annual meeting that anticipated its future growth, rejected the plan to sell the building in favor of pursuing the expansion plan. They would meet at Cafe d’Mongo’s Speakeasy, a longtime watering hole next door whose exterior has also become rooted in time, to hash out a vision for the building’s future. 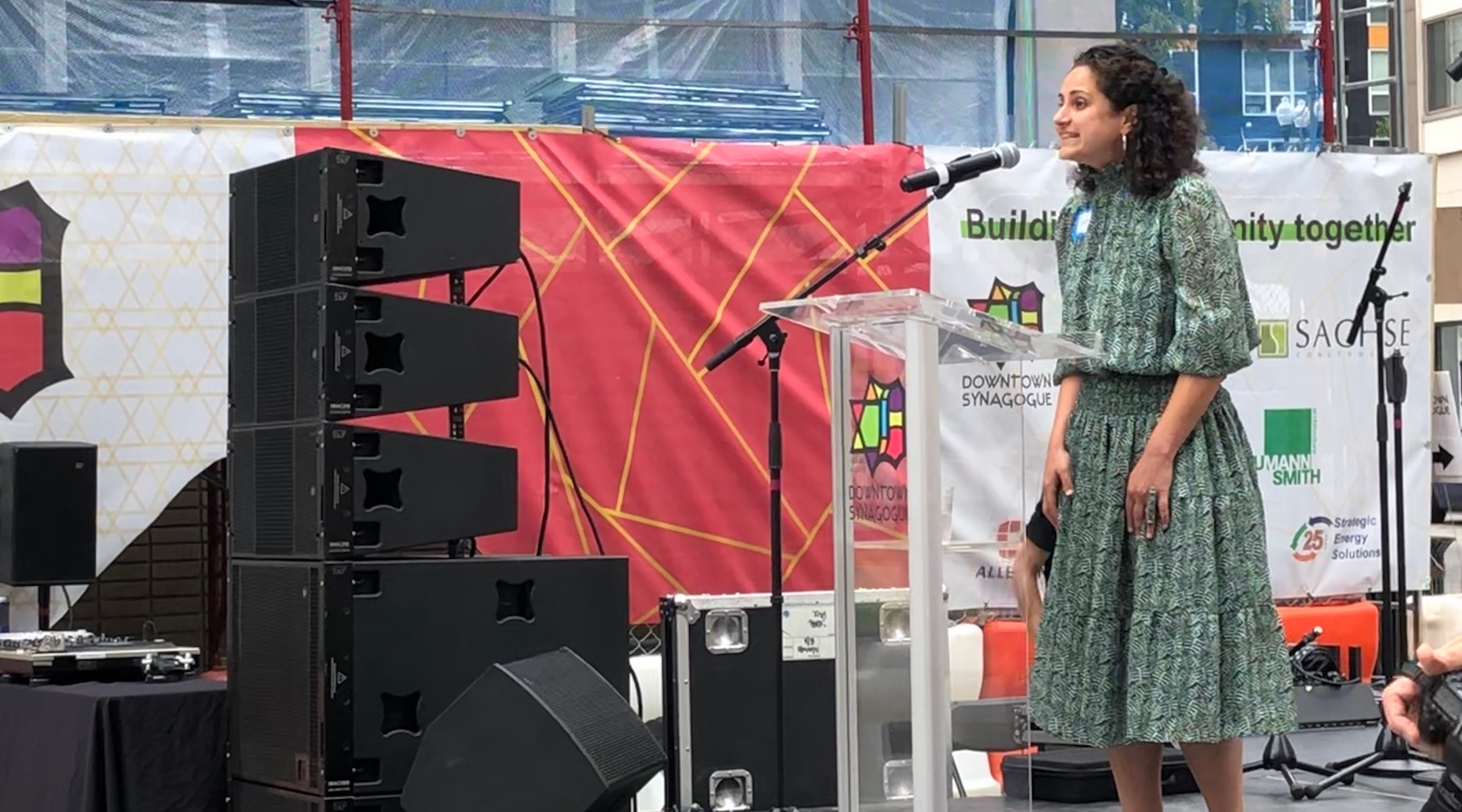 One of those who did, Vadim Avshalumov, became the synagogue’s president and spearheaded the beginnings of what would become its capital campaign a decade ago. The Azerbaijan native grew up in the suburbs when his family moved to the area from Israel in the mid-1990s but had just moved to downtown Detroit after graduate school to work as a program officer for various local redevelopment initiatives. As the rest of the city got a fresh coat of paint, he wanted the synagogue to have its own makeover.

“I’m very emotional, very happy,” Avshalumov said, reflecting on the culmination of the group’s vision Sunday. “At the same time, I have one of those ‘don’t celebrate until it’s actually done’” feelings. He noted that they still had to fundraise over $100,000 of the $1.4 million needed to get through a limited first phase of construction.

Even today, much of that fundraising is coming from the suburbs, including from longtime Jewish philanthropies like the William Davidson Foundation, where Avshalumov currently works.

“There’s more money coming from Detroit suburban Jews, probably, than the Jews that are right here,” said Rudman, who used to work for Temple Beth El in the suburbs. “But we’re working on building community all together.”

And rather than trying to peel away members, Rudman said, the suburban synagogues all want the Downtown Synagogue to prosper: “Nobody feels like they’re competing with us. They’re just excited this is happening.”

As the Downtown Synagogue grew, the needs of the larger metro Detroit Jewish community were changing, too. Suburban synagogues with dwindling memberships began consolidating elements like their educational programs, and in fall 2020 the local JCC closed its last remaining health club in West Bloomfield, citing dwindling enrollment and “overbuilt” real estate.

Next year, the JCC — which does not currently have a presence in Detroit proper — will be one of several local Jewish nonprofits to have a space in the Downtown Synagogue’s new Jewish coworking hub, along with the local federation, Repair the World, Hazon and Jewish Family Services.

The coworking space, which draws some inspiration from similar Jewish models in Chicago and San Diego, will be part of the first phase of construction. Aiming to reopen in early 2023, the first phase will also include an updated sanctuary; elevators and ramps for accessibility; a children’s space; and large glass windows on the ground floor, which Detroit Deputy Mayor Todd Bettison praised at the ceremony because “it will be more inviting and people will be able to see what’s going on.”

A planned second round of fundraising and construction hopes to deliver on the synagogue’s full redesign plan: creating a rooftop deck and event space by 2024. For now, the Downtown Synagogue’s true believers are celebrating what feels like a rebirth. And as their building remains under construction, this year they will be holding their free High Holiday services in churches around town — including one that used to be a synagogue.