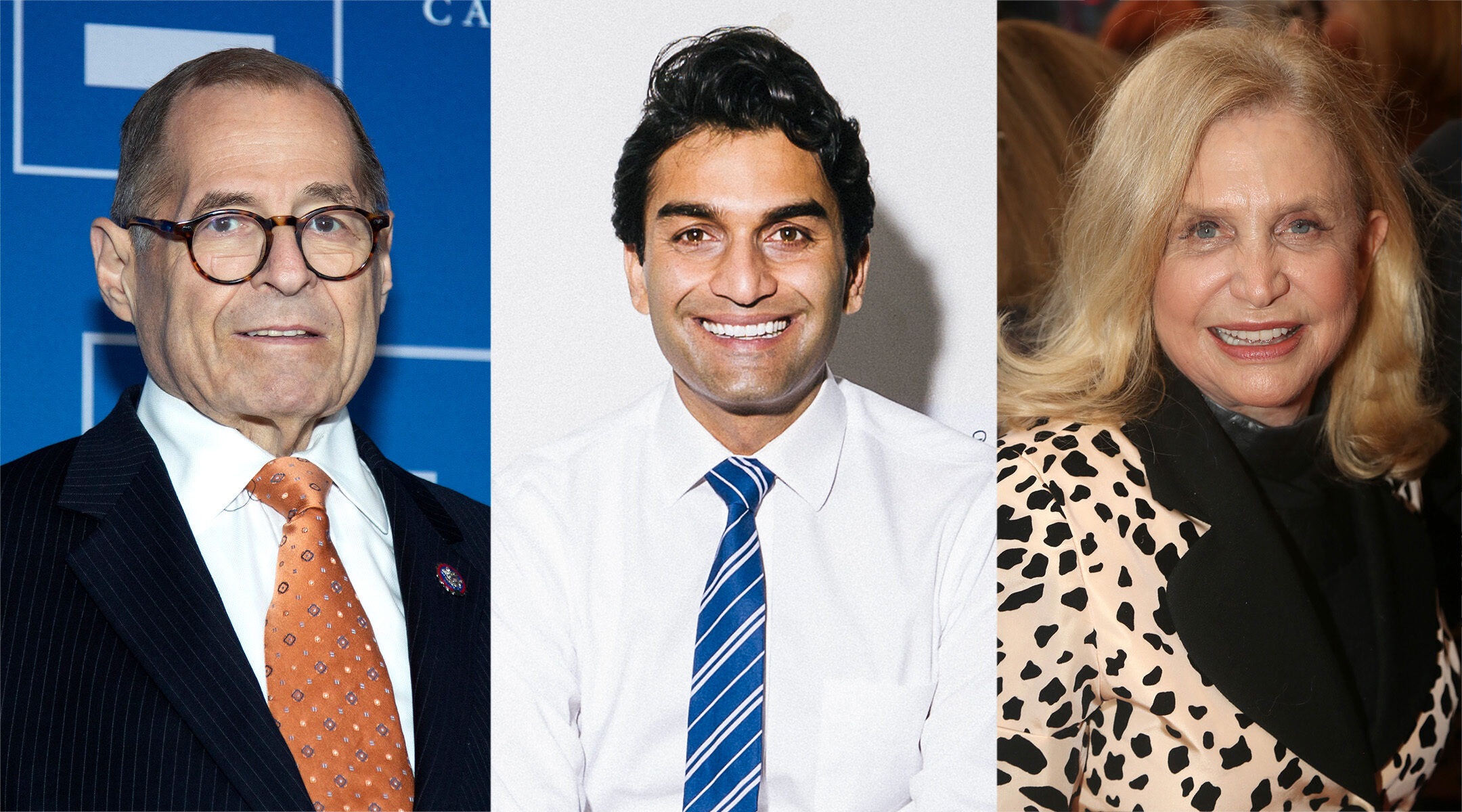 (New York Jewish Week) — In a campaign defined more by personal attacks and internal party rivalries than actual policy differences, one surprisingly contentious issue has emerged in the fight to represent two of New York’s most Jewish neighborhoods.

Rep. Jerry Nadler and Rep. Carolyn Maloney, now facing off in the redrawn 12th distinct that combined Manhattan’s Upper West and Upper East Sides, were on the opposite sides of the Iran nuclear deal vote in 2015, and have lately been relitigating their positions on the campaign trail.

At  a debate Tuesday sponsored by Jewish groups, Nadler defended his decision to vote for the deal, and Maloney hers to vote against it. Suraj Patel, the 38-year-old attorney who is providing a robust challenge to the two House incumbents, appeared to side with Nadler in support of efforts to revive a deal that had been canceled by former President Donald Trump.

Here’s a breakdown of how we got here, and what’s at stake.

What’s the deal with the deal?

Officially known as the Joint Comprehensive Plan of Action, the Iran deal was brokered in 2015 by former President Barack Obama. It traded billions of dollars in sanctions relief for a rollback of Iran’s nuclear program

In 2018, former President Trump withdrew from the Iran nuclear deal, calling it “one-sided” and reimposing tough sanctions against Iran in hopes of forcing its leaders to renegotiate. Iran responded in part by enriching uranium beyond the limits in the agreement, and now President Joe Biden is in talks to revive it in some capacity.  The European Union is brokering those efforts to restore the nuclear deal, which would again lift economic sanctions in return for limits on Iran’s nuclear program.

How do the candidates come out on this?

Nadler voted for the Iran Deal in 2015, becoming the lone Jewish Democrat from New York to endorse an agreement that was reviled by Israel’s government and a number of mainstream Jewish organizations. Maloney voted against it.

That was the background as the campaign came down to a tight finish ahead of the Aug. 23 Democratic primary.

At the time of his vote, Nadler called the deal imperfect but the best chance to keep Iran from building a nuke.

In a Jewish Community Relations Council of New York Congressional questionnaire released Monday, Nadler doubled down on this position.

“I concluded that, of all the alternatives, approval of the JCPOA, for all its flaws, gave us the best chance of stopping Iran from developing a nuclear weapon,” Nadler said.

The 75-year-old Congressman touted his record of sponsoring multiple bills that sought to prevent Iran from having a nuclear program before the Obama deal.

.@chuckschumer is fighting on behalf of New Yorkers with remarkable tenacity in the U.S. Senate—and he's delivering incredible results. I'm so proud to have his endorsement in my race for #NY12: together, there's so much more progress we'll accomplish for New Yorkers. pic.twitter.com/oLPLdZRFL0

In the same questionnaire, Maloney stated that Iran needs “a real tough nuclear arms treaty without sunsets and enforceable limitations on its ability to develop a nuclear weapon.” The JCPOA lifted restrictions on Iran’s ability to enrich uranium after 10 to 15 years. Supporters at the time said that was plenty of time for either regime change in Iran or some other game-changing event. Critics said Iran had only to run out the clock before charging ahead with a bomb.

“I support Biden’s statements during his recent trip to Israel that Iran should never be allowed to obtain a nuclear weapon,” Maloney said.

What are they saying now?

In a heated exchange during the debate last week at the Temple Emanu-El Streicker Center, Maloney reiterated that she supported her 2015 vote against the deal, saying that it “did not prevent” Iran from having nuclear weapons.

“It did prevent Iran from acquiring nuclear weapons,” Patel said.

In Patel’s JCRC questionnaire, he called the Iran Deal more than just a U.S. or Israel issue, saying it is “regional and international.”

“The best way to achieve Iran’s denuclearization is with a global agreement that includes snapbacks in Iran’s nuclear program,” he wrote. Snapbacks would reinstate sanctions should Iran deviate from its commitments.

One of the moderators, Forward Editor-In-Chief Jodi Rudoren, then pressed Maloney on her statement that the JCPOA “did not prevent” Iran from getting the bomb. She asked Maloney if  she thinks Iran has a nuclear weapon now.

“I don’t know,” Maloney said. “But there are allegations that they’re very close to getting one.”

Nadler also took shots at Maloney’s record in the debate, saying that we desperately “need to get back into that deal.”

“If we don’t get back into that deal, then we’ll have to deal with an Iran with an atomic bomb,” Nadler said. “If Carolyn’s vote had prevailed, Iran would have an atomic bomb already.”

Once again, Maloney supported her position, saying that the Iran Deal was not “strong enough or enforceable.”

All three candidates made conventionally pro-Israel statements on other issues.

.@CarolynBMaloney on Sen. Schumer endorsing @JerryNadler over her:

“He doesn’t live here. It doesn’t surprise me. The old boys network is very, very close and they support each other.” pic.twitter.com/xwbeYiDWka

What are the politics of this disagreement?

Seven years ago, the debate over the deal was one of the bitterest ever in domestic Jewish communal politics. This time around, Israel considers the agreement being brokered by the E.U. a bad one, and some House Democrats have warned that they will likely oppose Biden’s plans to reenter the Iran nuclear deal.

And yet passions around the deal are nothing like they were in 2015. Even the American Israel Public Affairs Committee, the pro-Israel lobby which fought hard against the JCPOA, hasn’t hesitated to endorse Democrats who voted “yes” for the deal in 2015.

Matt Nosanchuk, the president of New York Jewish Agenda and co-moderator of last Tuesday’s debate, worked in the White House as the Iran Deal was developed and implemented during the Obama administration.

He told the New York Jewish Week that Nadler’s vote reflected how the majority of Jews felt about the Iran deal.

According to a survey taken when the deal was being discussed in 2015, 48% of American Jews supported it, 28% opposed it and 25% hadn’t heard enough to form an opinion.

Nosanchuk noted those leaning right politically, including the leadership of AIPAC, certainly were not in favor of the deal and Nadler’s vote.

“At the time, Nadler had death threats and had to have security detail over this deal,” Nosanchuk said. “And yet, all three candidates in this race would define themselves as pro-Israel.”

Danny Danon, Israel’s former ambassador to the United Nations and former member of the Knesset from the Likud Party, told the New York Jewish Week that a new Iran deal under the Biden administration will “enrich and empower [the country] and unshackle it to continue its export of terror and atrocities.”

“The deal is a danger to Iran’s oppressed and suffering people, to the region and to the world,” Danon said. “The only way to combat the hardline regime sitting in Tehran is through isolation, strong and unyielding sanctions and the threat of real military action.”

Despite the differing opinions, Nosanchuk said that he doesn’t view this as an issue that people will care about when it comes to voting in District 12.

“I don’t see people voting on this issue,” Nosanchuk said. “There may be some who are on the right who object to Nadler’s vote, but I don’t see this as a decisive factor in how people vote.”

Nadler is the frontrunner in the race, garnering support from Sen. Chuck Schumer and currently leads in the latest polls with 29%.  Maloney is close behind Nadler with 27% and Patel is still in the race with 20%, while 19% said they were undecided.