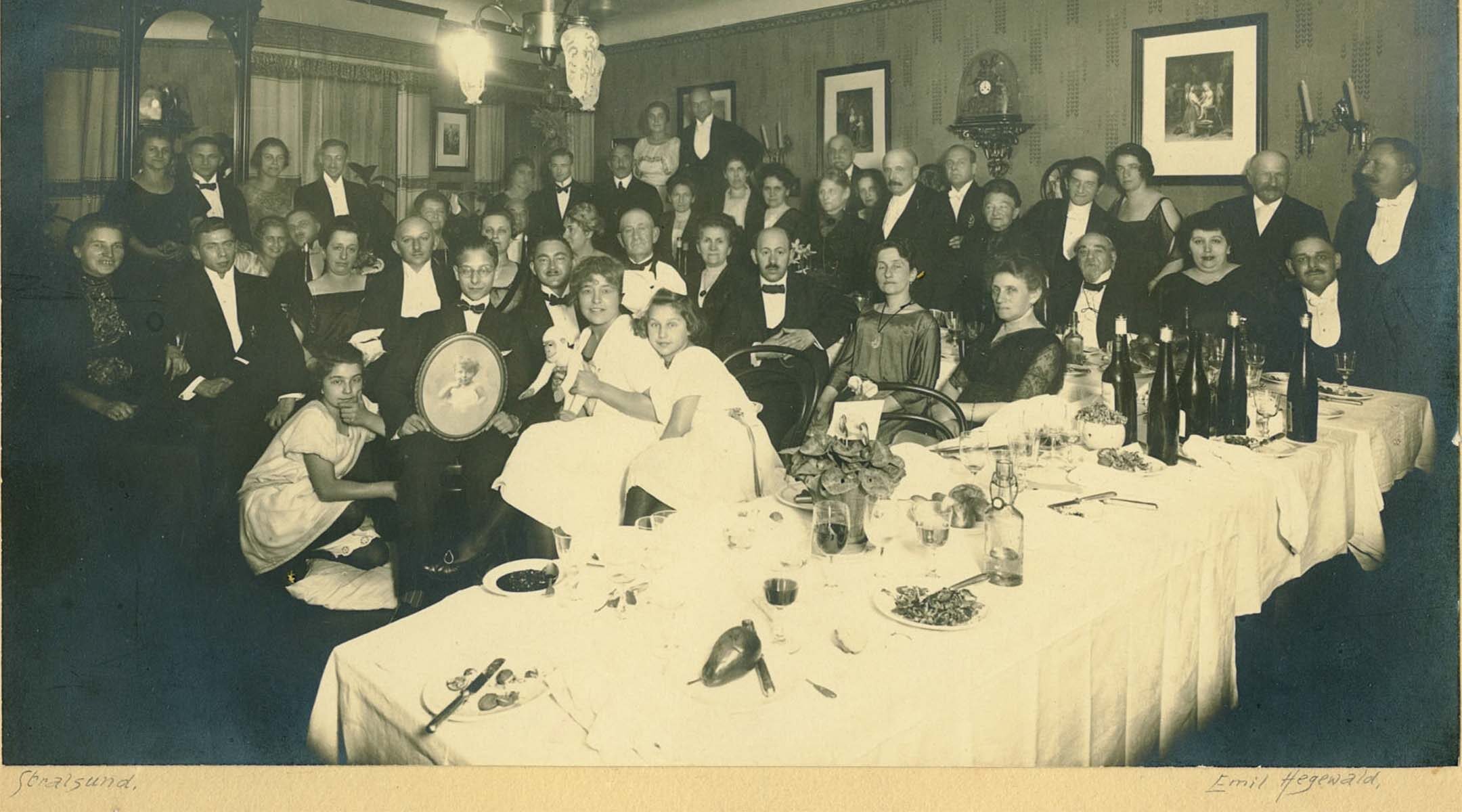 The golden wedding of Selma and Julius Blach, held in Stralsund, Germany in 1921. The Jewish family would be torn asunder by the Nazi Holocaust. (Courtesy of Fechner)
Advertisement

STRALSUND, Germany (JTA) — This charming medieval city nestled into the country’s Baltic coast appears an unlikely setting for a reunion of an extended family torn asunder by the Holocaust.

On Thursday, against the odds, some 20 descendants of Julius Blach and his brother Felix Blach gathered for four days in the city where the Blachs lived and ran the Jewish family’s leather business at Heilgeiststrasse 89, in the heart of the city’s commercial center.

Eighty-plus years after the Holocaust, few of the family’s descendants knew any other relatives existed. Some grew up with Jewish traditions, others were unaware of their family’s deep Jewish roots. A few have visited Stralsund and the site of their family’s business and home, but most never have, and many have never met each other.

The much anticipated reunion, postponed twice because of the COVID-19 pandemic, reconnected two branches of the family from six countries across four continents. But it may never have come about without the extraordinary efforts of Friederike Fechner — an accomplished German cellist who is not related to the Blachs.

Fechner, who is not Jewish, has devoted the past eight years to tracing the Blach family history and locating and reuniting more than 30 descendants from Germany, the Netherlands, Israel, the United Kingdom, the United States and Brazil.

The reunion is a way to “give the family back its roots and show them where they came from,” Fechner told the Jewish Telegraphic Agency.

‘I cry to you, my deceased ancestors’

Her role as family chronicler began in 2012, when Fechner and her husband Martin bought the building at Heilgeiststrasse 89. They had relocated to Stralsund from their home in Hamburg in 1994, motivated to help revitalize the former East German city. The house was a near ruin, decayed from more than seven decades of neglect during and after the war years, when Stralsund was part of the Communist-governed German Democratic Republic. 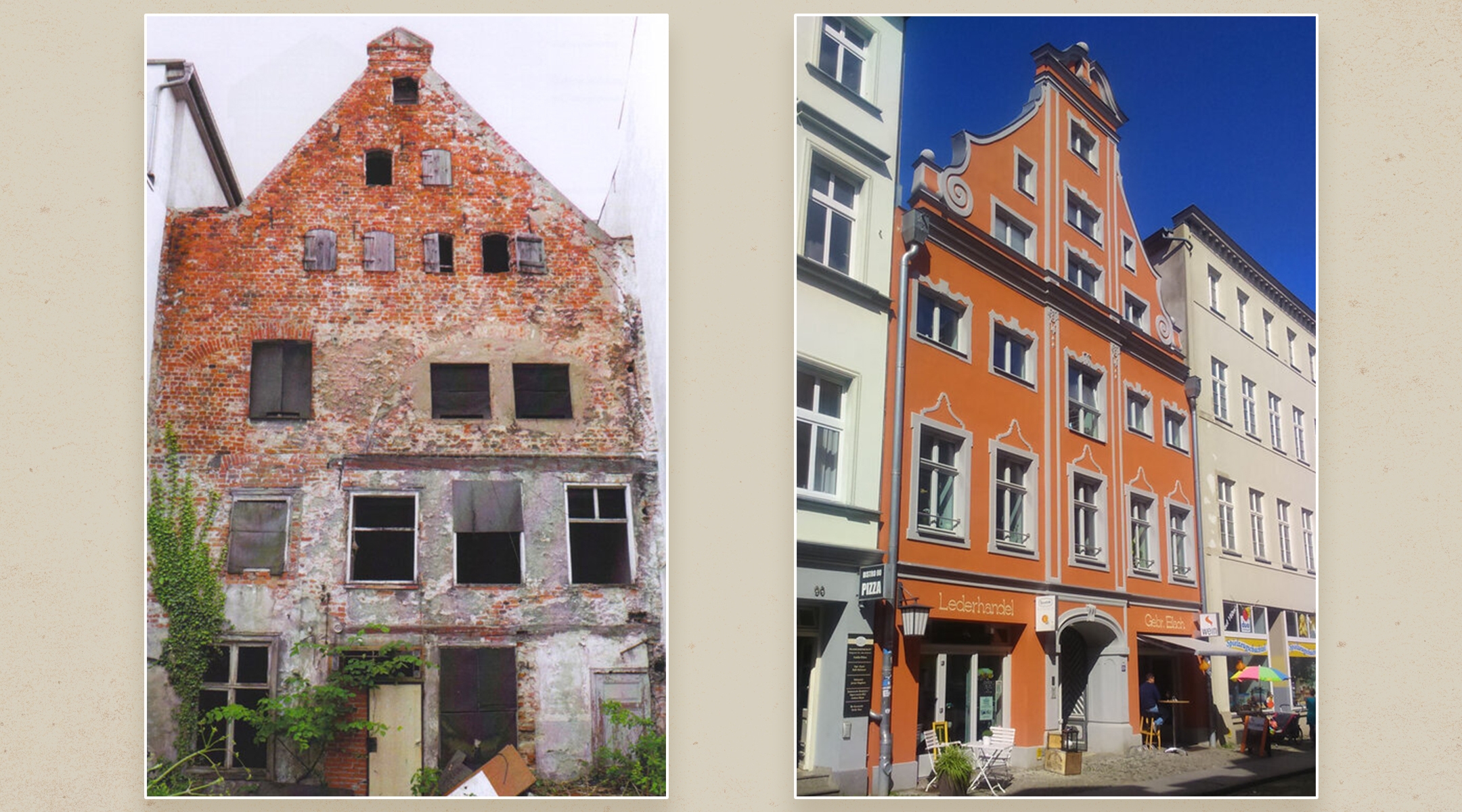 The building at Heilgeiststrasse 89 in Stralsund, Germany, that housed the Blachs’ leather goods business, before and after its restoration by Friederike Fechner and her husband Martin. (Courtesy of Fechner)

In 2014, the Fechners’ exacting restoration of the building garnered the city’s prestigious historic preservation award. In preparation for the awards ceremony, Fechner solicited the assistance of the city’s archivist and researched the building’s history. As their research progressed, the Blach family’s history came into focus.

For some six decades, from the early 1880s until 1938, two generations of Blachs ran their leather shop from the ground floor of the building, owned by Julius. Various members of the Blach family lived in its upper story apartments and others lived nearby.

The Blachs, whose German roots date back centuries, were part of Stalsund’s small but active Jewish community. It housed a synagogue (no longer standing) and a Jewish cemetery that survived the war.

In 1938, under extreme duress from Nazi persecution, Julius Blach’s nephew, Carl-Philipp, who was running the business, was forced to give it up. In his last entry to a handwritten business chronicle, Carl-Philipp lamented the loss in heart-wrenching prose.

“I cry to you, my deceased ancestors, that there is no fault on my part for the decline… I call to you that I have always tried to preserve your heritage but that had to give way to fate,” he wrote, vowing to uphold their values in his future endeavors.

Carl-Philipp fled to Berlin with his family and survived a concentration camp but died of ill health in 1946. Many Blach family members perished in the Holocaust, including four of Julius’s children; Carl-Philipp’s brother Paul Samuel; and two of Carl Phillip’s sons. A few survived the brutality of concentration camps.

Others, including Julius Blach’s son Friedrich, fled during Nazi rule, scattering to points across the globe.

Fechner delved more deeply into the Blach family history, determined to learn if there were any living descendants. She has now amassed a treasure trove of archival documents and created a detailed portrait of the Blach lineage dating back 300 years. 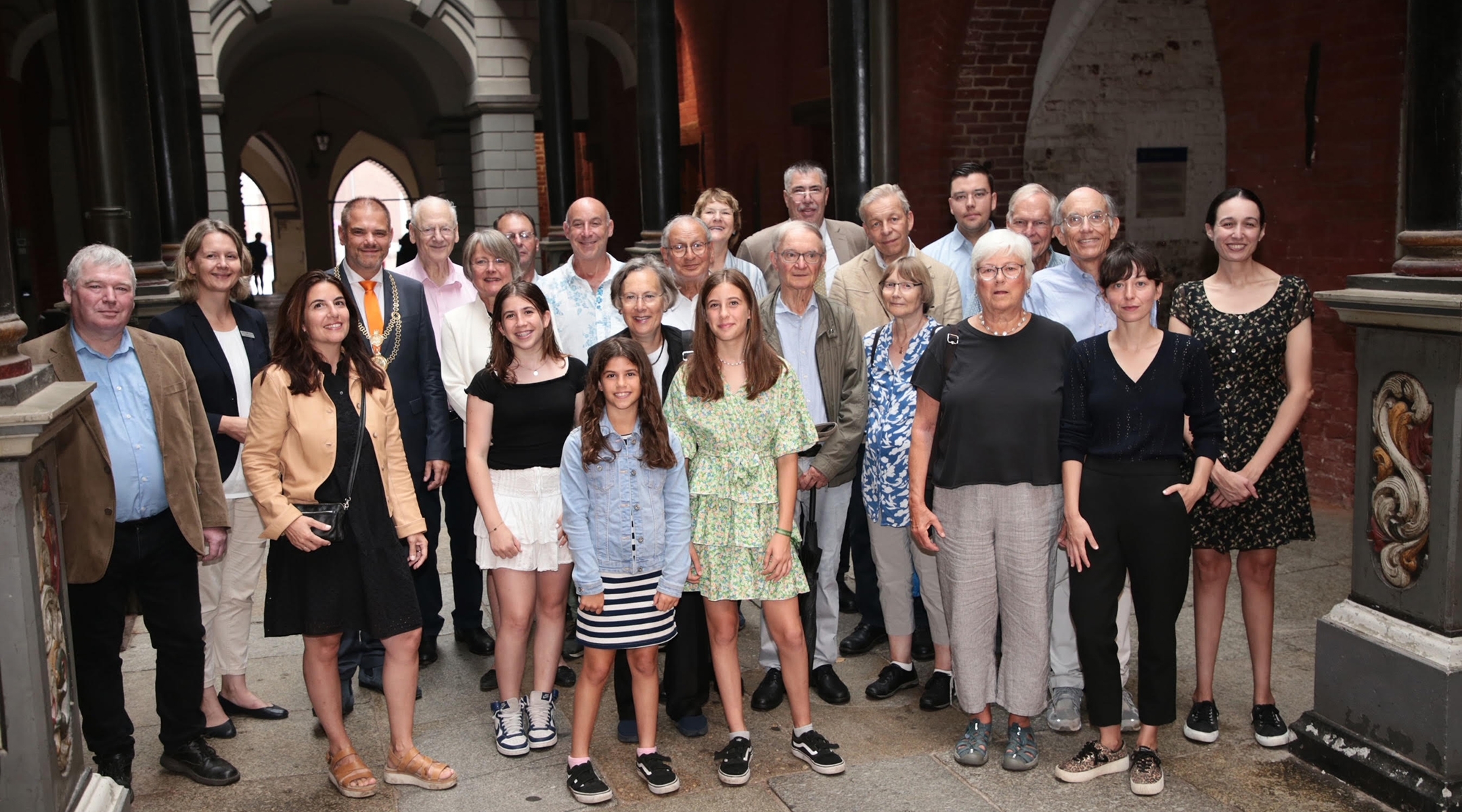 Twenty descendants of the Blach family in Stralsund Germany gather for an unlikely reunion that brought together three generations of relatives from across the globe. (Courtesy of the Stralsund City Archive)

On a recent sunny morning, Fechner greeted a visitor at the former Blach family business at Heilgeiststrasse 89, a stunning, terracotta-colored, gabled building that dates back to the late 17th century.

Outside, embedded in the cobblestone sidewalk are three stolpersteine, brass-plated “stumbling blocks” commemorating Carl-Phillip Blach and his two children. Thanks to Fechner’s efforts, five other stolpersteine have been placed around the corner for other Blach family members who perished in the Holocaust.

Inside the entryway, which is open to the public, Fechner has installed wall panels that reveal the story of the Blach family’s ties with Stralsund and the building.

Discovering the building’s pre-war Jewish past touched a deep chord in Fechner. She had a lifelong interest in Jewish history and specifically her country’s genocidal Nazi regime. Growing up, while her family spoke about the war, she heard little about the Jewish victims of the Holocaust.

“They didn’t talk about it,” she said in a long-ranging conversation at the tea house that is one of two shops on the street level of the renovated Blach building. “When we bought the house, we thought, ‘we want to take part in the restoration of the old town.’ We didn’t know that it would develop in such a very emotional way.”

While tracing the family has taken considerable time, it has been gratifying. “But it also showed me, again, how awful and violent our history in Germany was,” she added.

‘This hand reaching across the Atlantic’

Among those who will take part in the reunion is Casey Blake, an American Studies scholar at Columbia University, who was the first Blach family member Fechner connected with.

His grandparents, Friedrich and Kate, escaped from Berlin with their two children during Nazi rule and settled in New York, he explained in an email to Fechner.

His father, Peter Blake, Americanized his family name and served in U.S. military intelligence during the war. He later became an influential architect and critic.

Fechner and Blake began a correspondence that extended to Blake’s sister, Christina Blake Oliver, in Greater Boston. Both have since traveled to Stralsund with their grown children.

“Even now, I’m still amazed by what has transpired. I keep learning about new relatives I didn’t know I had. It is very gratifying to know that more of us survived than we previously realized.”

He and Oliver were aware of only a handful of relatives, each said in separate conversations. While their father and grandfather were steeped in German intellectual life and culture, both said they never spoke about the war or their family’s tragic losses. They were raised without religious faith except for the annual gathering around their grandfather’s candle-lit Christmas tree, a tradition he brought with him from Germany, Oliver recalled.

Oliver, whose mother was Episcopalian, is an active member of a Congregationalist church. She never had a desire to visit Germany, she told JTA, knowing that so many relatives were killed in Nazi concentration camps. But her visit in 2017 to Stralsund and spending time with Fechner was uplifting and left a vivid mark.

“I needed to see where my grandfather came from,” she told JTA in a phone conversation. “It was a place he loved.” She recalled he had a beautiful old map of Stralsund hanging in his kitchen. The visit to Stralsund “made me feel closer to him,” she said.

For Gaby Glassman, the reunification of the family caps a lifetime of seeking out her family’s roots, including visits to Stralsund well before Fechner contacted her.

Glassman’s mother, Rosemarie Joseph, grew up in Stralsund and was the granddaughter of Julius and Selma Blach. Rosemarie’s parents, Gertrud and Max Joseph, owned a department store around the corner from the Blachs’ business (they were later killed at the Sobibor death camp).

In 1937, Rosemarie and her first husband fled the Nazis to The Netherlands along with their young son Peter, who was at first hidden by a Dutch family and later deported to the Bergen-Belsen concentration camp. Remarkably, they all survived the war.

Glassman, a psychologist specializing in transgenerational Holocaust trauma, grew up in Amsterdam’s Jewish neighborhood. She moved to London where she still lives with her husband.

Fechner, who has been recognized for her work by, among others, the U.S.-based Obermayer Foundation for fostering German-Jewish relations, has expanded her focus beyond the immediate Blach family to the broader pre-war Jewish life in Stralsund. She is the founder of the Initiative for the Commemoration of Jewish Life in Stralsund, an organization that counters antisemitism and racial intolerance for today’s generation of youth.

Her research has enhanced Stralsund’s archive with important documents on the Blachs and other Jewish families,  according to Andreas Neumerkel, the archivist at Stralsund’s city archive.

Through her public lectures, articles and educational programs, Fechner has brought the city’s Jewish history to a wider audience, Neumerkel wrote in an email.

“Stralsund owes her that we are dealing with this part of our history more than before,” he wrote.

Fechner has embraced the new friendships she has developed with Blach family descendants, which has offered her the opportunity to speak more openly with Jewish people about the Holocaust.

“I always felt such a tension because I’ve felt bad for what our country has done to Jewish people,” she said.

Fechner is often asked why she has taken on this immense undertaking. Beyond reuniting the family, she has been motivated by the forces of history.

“I wanted to give understanding and friendship a chance and to convey a different impression of Stralsund … and the Germans than the memory which still hovers like a dark heavy cloud,” she wrote in remarks she shared with JTA.

“The most painful rejection of these innocent and individual victims would be in the continued refusal to remember.”