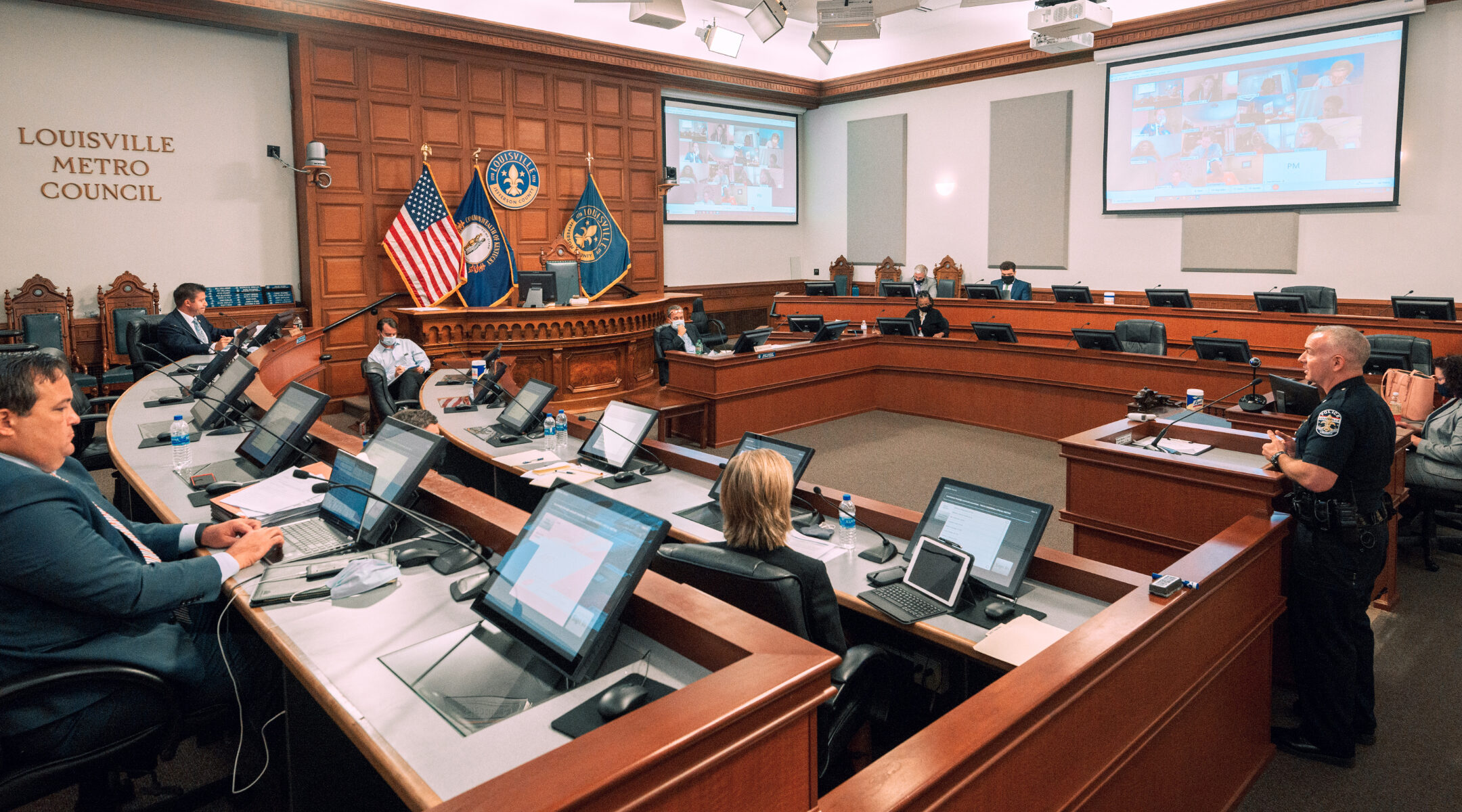 Ret. Lt. Col. Josh Judah, a former police officer in the Louisville Metro Police Department, testifies in a 2020 hearing on how police handled protests and unrest in the response to the killing of Breonna Taylor. (Jon Cherry/Stringer via Getty Images)
Advertisement

(JTA) — The largest Jewish community organization in Louisville, Kentucky, is facing criticism for hiring a police officer who was connected to the controversy over the 2020 police killings of Breonna Taylor and David McAtee.

Josh Judah, a retired lieutenant colonel with the Louisville Metro Police Department, was hired to serve as a security advisor for The Jewish Community of Louisville, an umbrella group that includes Louisville’s Jewish Community Center and Jewish Federation.

Judah arrived at Breonna Taylor’s apartment in March of 2020 at least an hour after other officers carried out a no-knock search warrant and shot Taylor six times. He reportedly confirmed another officer’s false claims that Taylor was armed with a rifle and fired at police. Four current and former Louisville police, not including Judah, face federal civil rights and unlawful conspiracy charges in her death.

Judah’s new role includes overseeing the JCL’s SAFE Louisville initiative, which includes running security operations of Jewish institutions and organizations across Kentucky, responding to antisemitic threats and incidents and supervising community safety trainings. In the role, Judah is the full-time representative in Louisville of the Secure Community Network, a national Jewish security service founded by the Jewish Federations of North America and the Conference of Presidents of Major American Jewish Organizations.

Judah was also involved in the events surrounding the death of David McAtee, a Black restaurant owner shot by police and the National Guard during the nationwide protests against police brutality in 2020. Judah had dispatched police to disperse a crowd gathering outside McAtee’s restaurant, where there was a party in violation of the city’s 9:00 p.m. curfew. Police fired pepper balls into the crowd, McAtee responded by firing two shots, and the Louisville police and National Guard fired back. A bullet struck McAtee in the chest and killed him.

McAtee’s family filed a wrongful death lawsuit against the National Guard members and police officers involved, including Judah. The civil case will go to trial in April 2023.

According to NPR affiliate station WFPL, a few members of the Louisville Jewish community had circulated a petition to JCL leaders criticizing the hire, saying it could “threaten the safety and comfort” of Jews of color and create a rift between the Black and Jewish communities.

“While many members of Jewish communities have grown accustomed to having a police presence in our spaces, and feel more secure due to this presence, this positive association is not universal,” the petition says. “Inviting law enforcement into a space does not guarantee all those in that space will be, or feel, protected equally.”

Judah responded to the criticism in an interview with WFPL.

“I’m no longer part of LMPD. I’m focused on my future, which is empowering the Jewish community and broader communities of faith to meet the very real challenges of violence in 2022,” said Judah, who was named LMPD’s “Commanding Officer of the Year” in 2015. “The best way I’ve learned to bridge gaps is to meet with people and talk to them.”

JCL had tried to address community members’ concerns about hiring Judah by noting that Judah was upfront in job interviews about “very controversial command decisions” he made while serving in the Louisville Metro Police.

“He understands better than most what issues must be addressed to build and rebuild community relationships and trust. His desire to serve was deeply evident throughout the hiring process,” JCL leadership told residents.

Sara Klein Wagner, JCL CEO and president, responded to WFPL in an email.

“SAFE Louisville is designed to protect our Jewish citizens, synagogues and organizations,” Klein Wagner wrote. “Since many of the threats faced by the Jewish community come from violent extremists who also target members of other communities based on faith, race, ethnicity, and gender, the SAFE Louisville initiative will help increase the security of our entire community.”

CORRECTION: Due to an editing error, an earlier version of this story incorrectly stated that Josh Judah was at the scene of the killings of both Breonna Taylor and David McAtee. Judah is believed to have arrived after Taylor was shot; he later reportedly confirmed another officer’s false claims that Taylor was on the floor and armed with a rifle. In the case of McAtee’s killing, Judah reportedly dispatched police and the National Guard involved in the incident but was not at the scene.