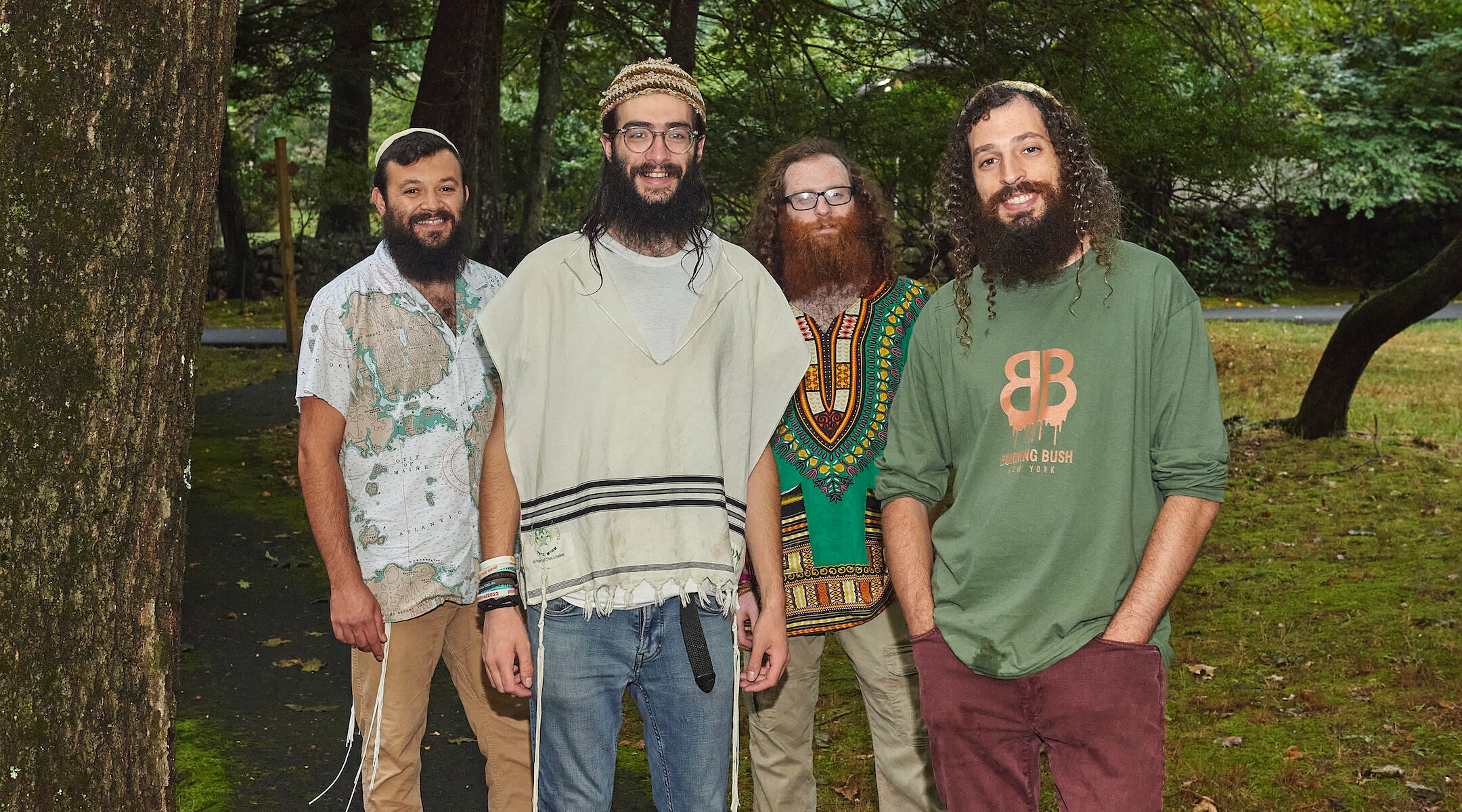 (New York Jewish Week) — The hippy-ish, bearded Jewish bandmates who call themselves “Shlepping Nachas” came together in 2019 in Meron, a pilgrimage site in northern Israel where religious Jews gather to mark the holiday of Lag B’Omer. Three of them were friends from yeshiva who played guitar and sang; a fourth, Avraham Dovid Trachtenberg, joined them on percussion.

Trachtenberg and one of the players, Yedidya Steinberg, used to work at the same restaurant.

“It was magic,” Simchi Skaist said. “People were dropping money. We had a great time. We knew we had some fire burning in this project.”

Skaist said they had fun playing random gigs and would sing for hours, including a cappella on Shabbat, but had no structure and still considered themselves a make-believe band.

But that’s before a businessman from New Jersey named Moshe Morris ran into them in the Arava desert. He wasn’t in the music business, but sounded like he knew what he was talking about.

“He said ‘Guys, you need to stop what you are doing and do music,’” Skaist recalled. “It was profound. No one ever sat us down and told us that. He convinced us to go on tour that week.”

Two years and one pandemic later, the four-man group, with three members who grew up in New York, have broken out in the niche but impassioned world of Jewish rock. This month they’ve come to New York for their biggest shows to date: opening on Thursday for the powerhouse Jewish band Zusha at Nublu 151 in Manhattan, and then heading upstate for Juzefest, a Jewish music and camping festival taking place over Labor Day weekend.

“We picked them because of their vibe, because they bring the energy and they uplift everyone,” said Juzefest founder Hannah Esther Teichman-Taub. “It’s not just a performance with Shlepping Nachas, it’s an experience.”

Ahead of the two gigs the four were staying in a cabin in Rockland County, where they talked about their excitement over the shows, how they got together and how they got their name.

Trachtenberg, 26, from Far Rockaway, Queens, said they were busking on Jaffa Street in Jerusalem and people would ask for the name of the band.

“We said we weren’t a band,” he told the New York Jewish Week. “They said they had photos and wanted to know where they should send them. So at that point we were a make-believe band and the chevra [a group of friends] made a social media page for us.”

The name is a pun on the Yiddish phrase “shepping naches,” which means to derive joy, usually from one’s child. “Shlep” means to drag or carry a burden, while a “shlepper” can describe a slob or a beggar.

Trachtenberg, who goes by the nickname “Trak,” said he was inspired by 18th-century Hasidic master Reb Zusha of Anipol.

“He was a big gadol [Torah teacher] and he was a big shlepper in that he wore ragged clothing,” Trachtenberg said. “He looked like his life was terrible, but he was always so happy. I was hung up on that idea, you know, of a simple Jew, who deep down was very holy. So the term ‘shlepper’ — all our friends would argue who is the biggest shlepper.”

Yedidya Steinberg, 30, originally from Lakewood, New Jersey, said the group’s motto is not to judge a book by its cover.

“The person who looks mamash [really or exactly] like the biggest shlepper, once you get to know them and look beyond, then you can see the person is the biggest fire and the holiest soul,” said Steinberg, whose nickname is Diddy.

Drashot — Torah lessons — are as much a part of their music as their vocabulary. Their video for the song “Kudshabrichu” — a variation on a name of God, translated as “The Holy One, blessed be He” — garnered more than 150,000 views. Written by Dov Shurin, it has a reggae beat and the chorus “I want you to be my rebbe,” my spiritual guide.

“You daven [pray] through your rebbe, not to your rebbe, because the ultimate rebbe is Hashem,” Trachtenberg said of the song.

The group says that while their fan base at this point is mainly Orthodox, their music is for all people and that secular Jews have enjoyed their music at festivals.

Yekusiel Adler, 22, from Brooklyn, is known as “Skilly.” He was studying at Yeshivas Matisyahu in Jerusalem when he first ran into Steinberg.

The two watched a YouTube performance of Phish, the cult jam band.

“That was the only thing we could agree on — that Phish was good music,” Adler said with a laugh.

He said they played in caves and on street corners and eventually began doing original music. Trachtenberg will often play the bass guitar. But Steinberg, Skaist and Adler all do lead vocals and can be found playing lead guitar, rhythm guitar or bass. There is no single frontman in the group and while they do some covers, all members contribute in the writing of their original songs.

Skaist said it was a huge benefit that his father, a rabbi, is a musician and performer. Born in Jerusalem, Skaist, 23, grew up in Monsey, New York. His father performed music in clubs and venues under the name “Rav Shmuel.”

Skaist said that getting “exposure into a world of creating was huge and it was all about expressing and doing your own thing. I was watching him record an album in the house and he did his own website. For me, that was a huge influence. I got the inside view of production and what’s necessary to create a vision of music.”

During COVID, the group was separated and came back together fully in 2021.

Adler said the group was happy to play festivals in Israel, where except for the occasional rowdy mosh pit, the audiences are relaxed. The group was a surprise guest at the Sababa Music Festival in June in Narrowsburg, New York — a sort of Jewish Woodstock, if one can imagine Woodstock with separate accommodations for men and women and no instruments on Shabbat.

While there is humor in their name and their videos, Shlepping Nachas take their music very seriously.

“The point is to let loose and be free and connect to a higher power, whatever that may be and whatever that may mean to you,” Adler said. “Anyone who wants to bend an ear, bend it all the way, man. It will lift you and it will carry you. It will inspire you and make you laugh.”