A novice baker has a soft, fresh take on your grandma’s mandel bread 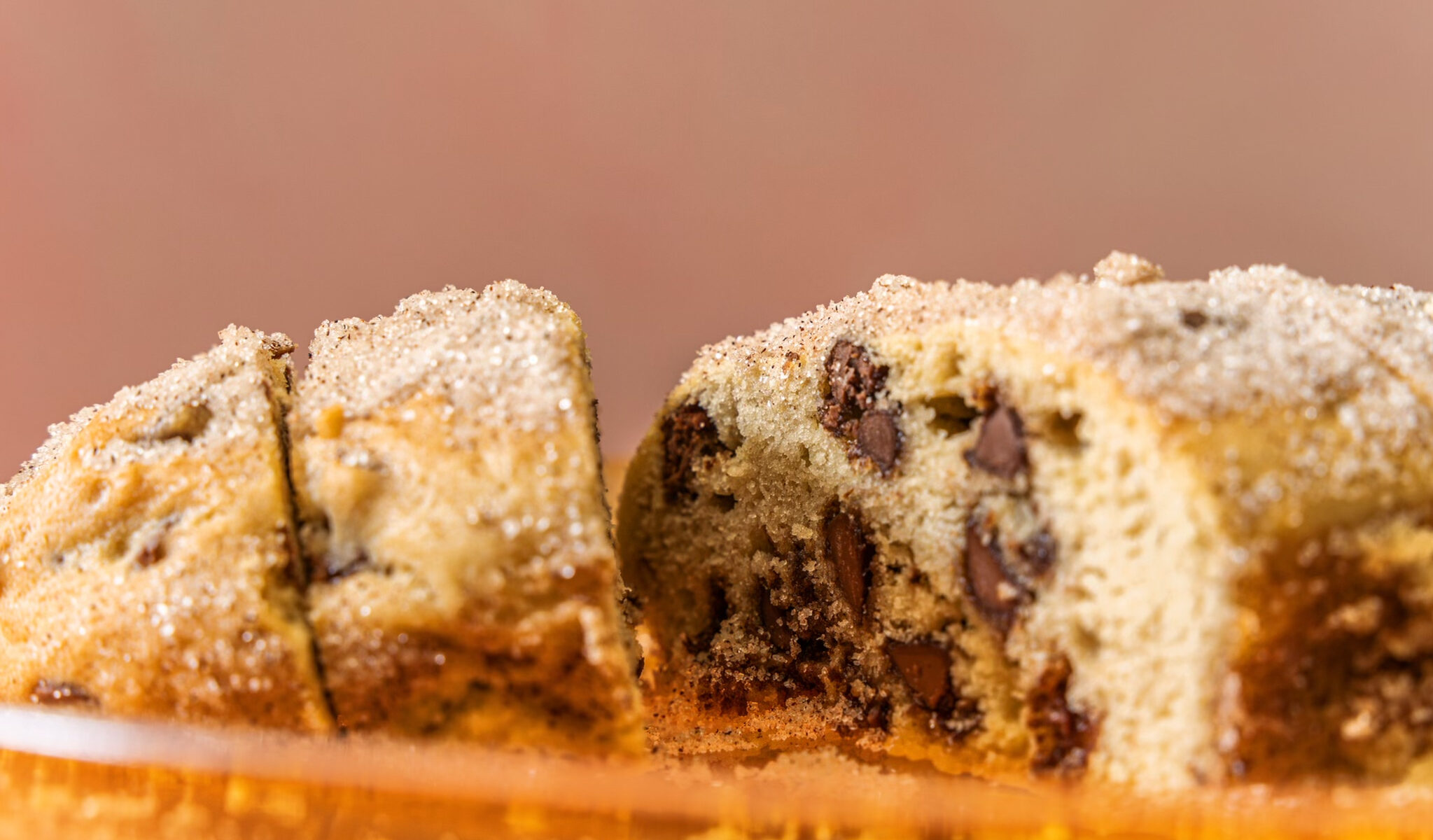 Stephanie Berlin's version of mandel bread is softer, richer and a bit more decadent than the crunchy, almond-rich biscuits your grandma might serve on Shabbat. (Gabe Sanchez for @thedeligram)
Advertisement

(New York Jewish Week) — Stephanie Berlin didn’t always want to launch a Jewish dessert brand. In fact, it was quite the opposite. Berlin wanted to create a product that would be inclusive; a brand that everyone could relate to. But what Berlin soon found was that her modern take on traditional mandel bread had the power to bring everyone closer together.

Unlike a typical mandel bread — a popular Ashkenazi cookie that’s traditionally baked twice — what Berlin calls “Wandel” bread is only baked once. That means that it’s softer, richer and a bit more decadent than the crunchy, almond-rich biscuits your grandma might serve on Shabbat (“mandel” means “almond” in Yiddish and German). Berlin grew up eating her mom’s version, but, after some more research, Berlin realized that the recipe might not be unique to her family, and that there are similar versions from around the world.

“Wandel is a modern version of a very traditional, universal treat,” Berlin, 34, told the New York Jewish Week. “A bite of Wandel reminds us that we’re a little more similar than we are different.”

Berlin’s idea to make Wandel into a full-fledged business fell into her lap over the past year, during which she felt burnt out from working in film for many years. She was already baking it for her friends, who were immediately taken by the treat.

An Illinois native, Berlin graduated from Syracuse University in 2010 and launched a career in entertainment, working at Start Motion Pictures in New York and then at the Music Box Theatre in Chicago, building out their public relations department. In 2020, right before the COVID-19 pandemic, Berlin moved back to New York City and began working at a smaller film distribution firm in their marketing and publicity department.

Meanwhile, Berlin noticed other new takes on traditional Jewish foods that had been getting some traction, like Dolly Meckler’s challah brand, Challah Dolly, which was inspiring to her, and The Matzo Project, an artisanal matzah and cracker maker. 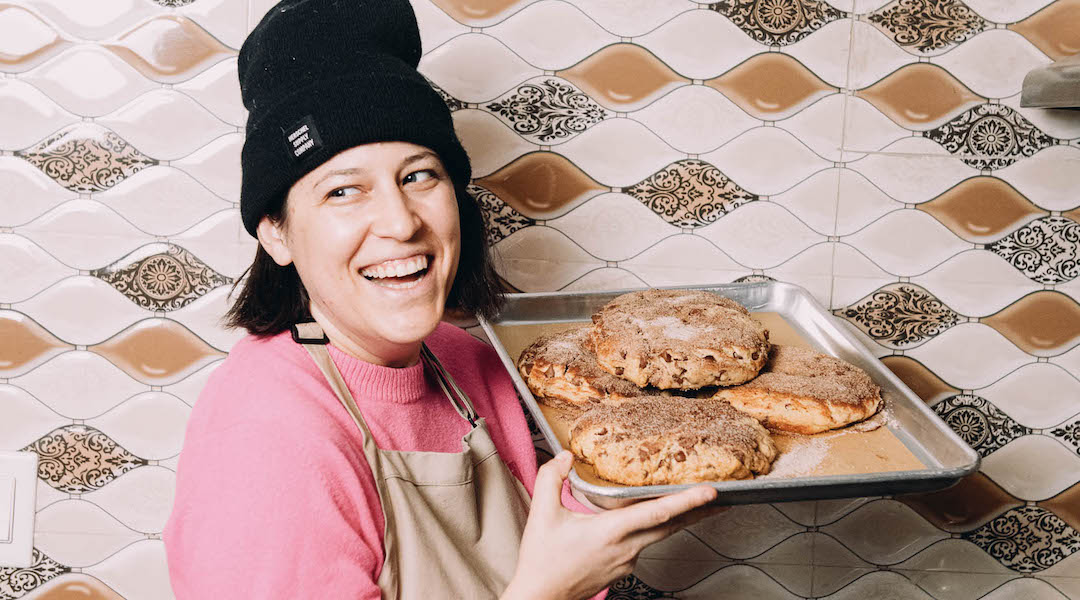 In early Oct. 2021, Berlin launched Wandel at the PS183 market on the Upper East Side. (Courtesy)

Others have observed the trend, too. “I think that food can be such a powerful gateway to tell stories about one’s culture,” said Atara Bernstein, co-founder of The Pineapple Collaborative, a woman-made pantry goods company and community for food lovers. “There’s so many Jewish foods that go underappreciated. So the more we can do to create a mainstream gateway to that, I think the better.”

Berlin built a website, trademarked “Wandel” (the “W” is meant to highlight how worldly the dessert is) and got to the most important part: the baking.

“I don’t have any background in baking or cooking — like, none,” she said. “I studied the recipe. It was really important for me to take that time to understand it.”

In early Oct. 2021, Berlin launched Wandel at the PS183 market on the Upper East Side, and her cookies sold out week after week. Berlin leveled up to online orders this past December, and the day after her website went live, she hit 100 orders. Since then, she has expanded into brick-and-mortar stores like Butterfield Market on the Upper East Side and Shelsky’s in Brooklyn. This summer, Wandel Bites are also available at Bartlett’s Farm in Nantucket.

Now Wandel is Berlin’s full-time gig. She left her job in May 2021 and has upgraded to a commercial kitchen. In addition to baking, Berlin also does everything on the business side of Wandel, which includes running the product’s Instagram page and meeting with potential new bakeshops. Berlin’s childhood friend, Juliana Pesavento, helps Berlin with public relations.

Traditional mandel bread has a texture that is similar to biscotti: crunchy and on the drier side. It’s made from flour, baking powder, eggs and typically other mix-ins, like chocolate chips, almonds or walnuts, and is commonly enjoyed on Shabbat and other Jewish holidays. In the past year, there has been a new wave of mandel bread bakers spicing up the market, like Melissa Blasberg of Balaboosta’s Bakery and Michbael Reiss of Michael’s Mandel Bread, who include ingredients such as M&Ms, Nutella and Oreos in their breads.

But Berlin has set herself apart with what her site calls a “modern interpretation of a classic specialty.” Berlin says her dessert is softer than a biscotti, but heartier than a cookie. 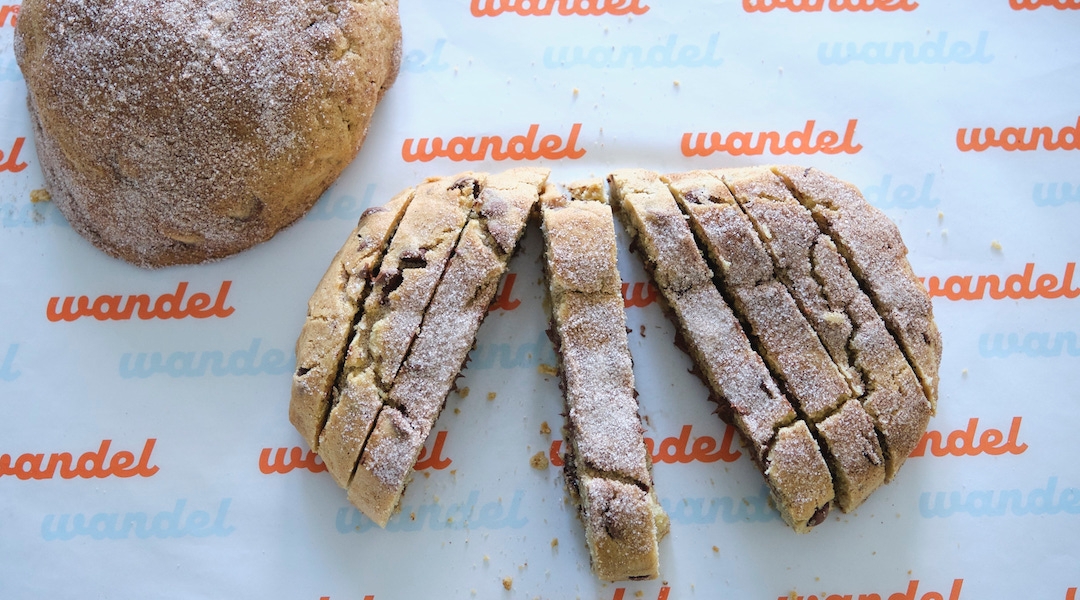 A loaf of Wandel cuts into long, biscotti-like pieces. (Courtesy)

It comes in two flavors: original, which is full of milk chocolate chips and dusted with a hefty layer of cinnamon sugar; the other has dark chocolate chips with a sprinkle of Maldon sea salt on top. You can buy a loaf of Wandel, which cuts into long, biscotti-like pieces, or Wandel Bites, which are smaller and reminiscent of a mini cookie.

“I immediately related with Wandel,” said Anna Polonsky, founder of Polonsky and Friends, a branding and design consultancy for food-related products. “Not only because it is delicious, but also because it helps to keep a piece of our disappearing Ashkenazi Jewish culinary repertoire current, exciting and approachable to all.”

Currently, Berlin is working on getting Wandel kosher certified. She also hopes to expand into the gluten-free category as well as new markets, like corporate gifting and nationwide supermarket chains. She dreams of collaborating with other classic New York dessert brands, like ice cream shop Caffè Panna, and creating different flavors of the treat.

“This recipe, specifically what it means to me, is family and closeness and sharing a delicious treat with your loved ones, learning and celebrating new traditions amongst one another,” Berlin said. “This recipe in particular, the modern version of mandel bread, is unification.”