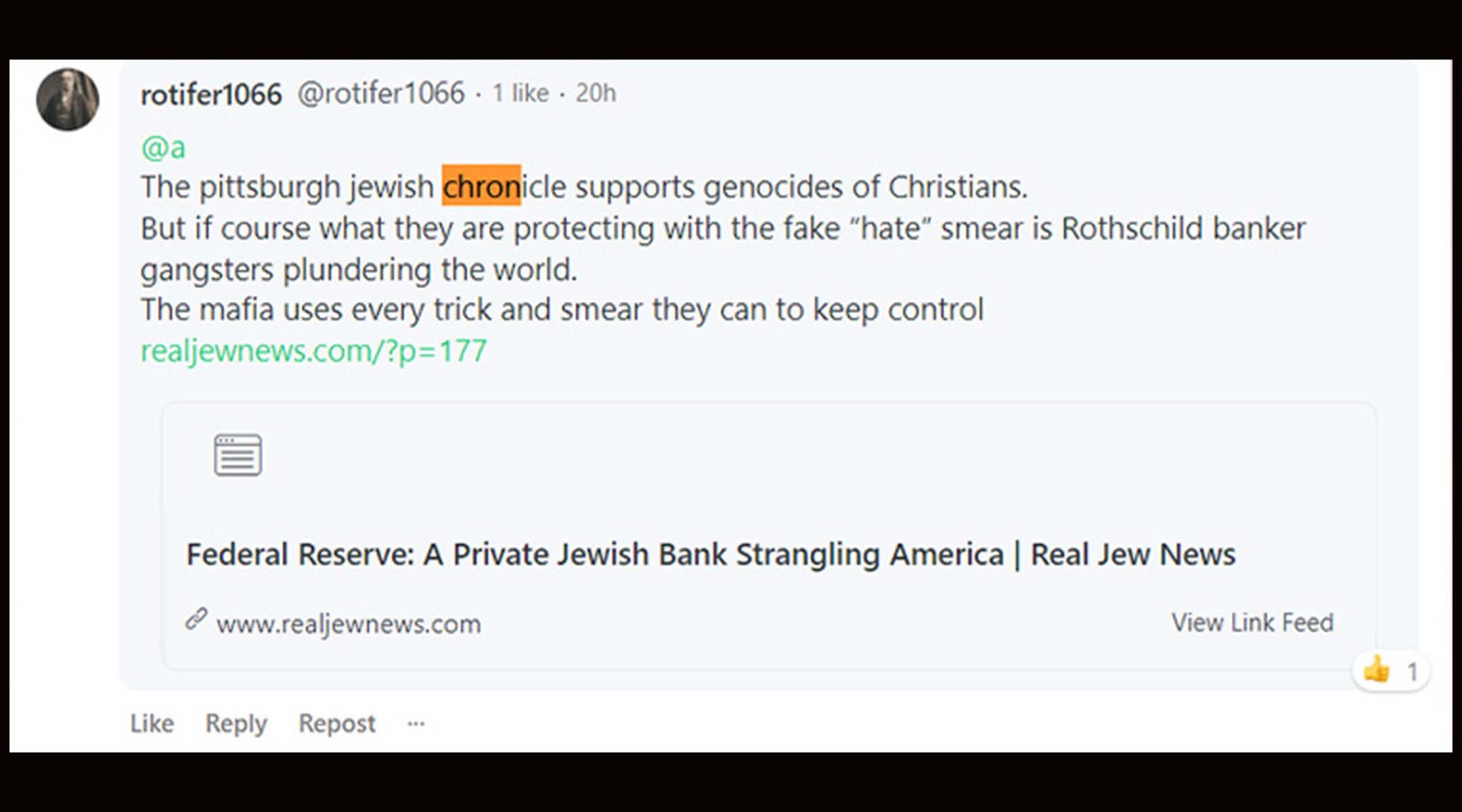 A screenshot shows a reply left on Gab founder Andrew Torba's page after he posted a link to a Pittsburgh Jewish Chronicle story. (Screenshot by David Rullo)
Advertisement

In response, several of Torba’s followers aimed antisemitism towards the Chronicle.

“People are done caring about your eternal victimhood complex,” Torba wrote. “Free speech means the right to offend…Stop conflating offensive memes with ‘threats’…Gab is what free speech looks like, the good, the bad, and the ugly are all included.”

Within 21 hours of publication, Torba’s post had more than 560 comments and 821 reposts. Many of the replies voiced agreement with Torba, and a large number included antisemitic comments, tropes and memes.

Two replies read, “Exile the jews from the USA and they’ll take that hatred for God with them,” and “it’s anudda SHOAH.”

Torba is a supporter of Pennsylvania Republican gubernatorial candidate and Pennsylvania State Sen. Doug Mastriano. After paying the social media platform $5,000 in consulting fees, all new Gab users automatically followed Mastriano before he closed his account in the wake of widespread criticism from both Republicans and Democrats.

Frankel, who has been in office since 1998, had criticized Mastriano for his ties to Gab.

Torba has embraced Christian nationalist and antisemitic ideologies. In July, he said on Gab TV: “This is a Christian nation. Christians outnumber you, by a lot. A lot. And we’re not gonna listen to 2%. You represent 2% of the country, ok? We’re not bending the knee to the 2% anymore.”

According to the Anti-Defamation League, Torba once reposted a comment from a Gab user which reads, in part: “So, should we subject our children to Jewish propaganda on television, music, or movies? Uh, no. Should we act like the nation of Israel is not in rebellion against God? Uh, no. Should we ignore that Talmudic zionists want to crush the Gentiles? Uh, no.”

As of Wednesday, Torba’s repost of the Chronicle’s story and the subsequent replies to that post were unavailable and no longer visible on his page.

The man accused of killing 11 Jews in the Tree of Life building posted antisemitic messages on Gab before the Oct. 27, 2018, massacre. In his Gab bio, he described Jews as the “children of satan.”

A version of this piece originally ran in Pittsburgh Jewish Chronicle and is reprinted with permission.