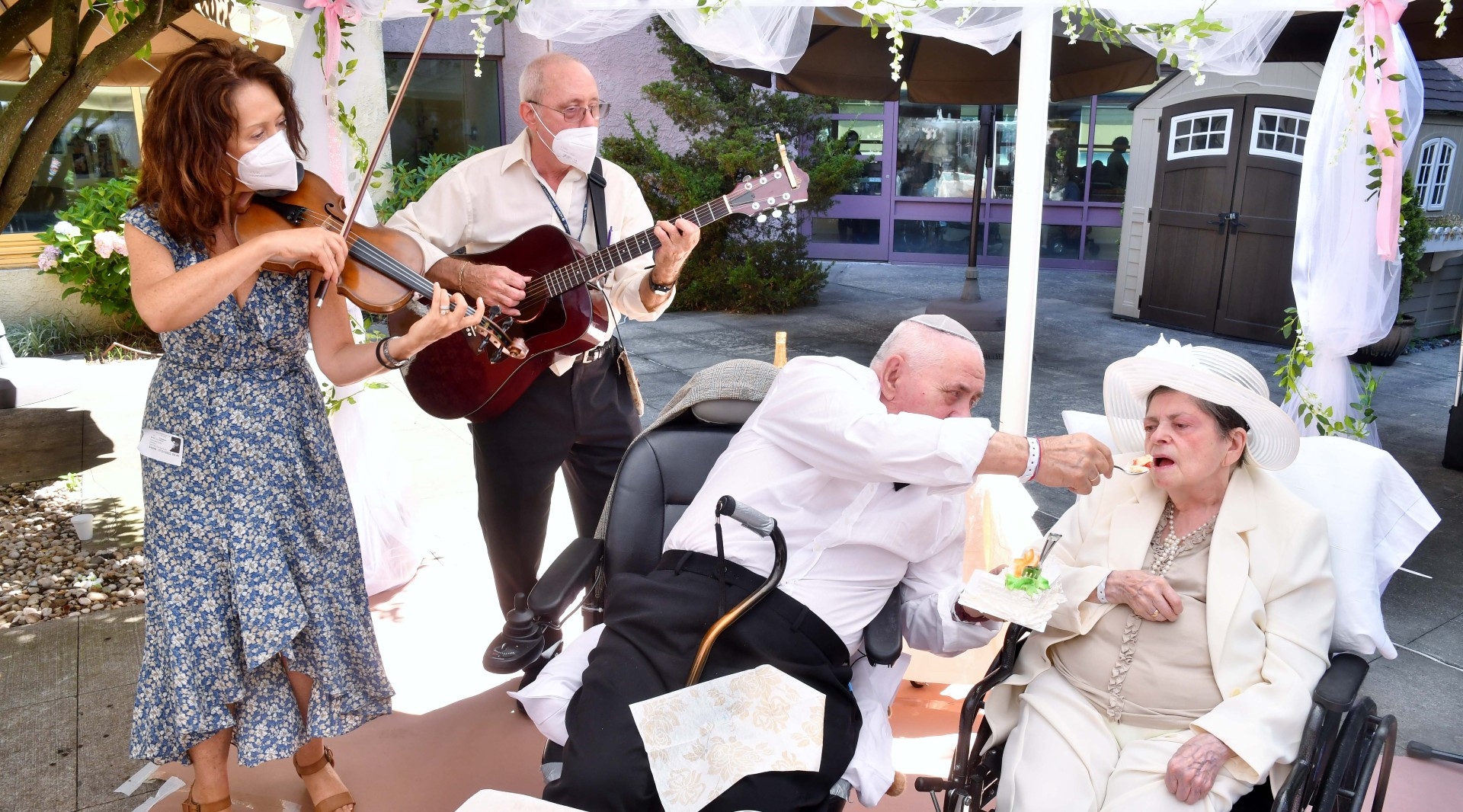 Music therapist Peter Davis and violinist Alejandra Mahave serenade Feyga and Mikhail, a couple who renewed their vows after 65 years of marriage, at the Menorah Center for Rehabilitation and Nursing Care in Manhattan Beach, Brooklyn, June 20, 2022. Caregivers are adopting new approaches to caring for the Jewish aged. (MJHS Health System)
Advertisement

Picture this scenario: An 89-year-old Holocaust survivor lies on his back while a white-coated dentist with pliers approaches, preparing to pull an infected tooth. Feeling frail, helpless and a little confused, the survivor flashes back to Nazi medical experiments, panics, and is unable to undergo the procedure.

Or this one: An attorney asks a Holocaust survivor about preferences for burial or cremation, then hands her a form to list all her financial assets. The questions and subject matter remind her of watching her parents surrender all their worldly possessions before ultimately being forced into the crematoria. She leaves the meeting anxious and never returns to complete the advanced planning.

Even something as innocuous as a buffet in a synagogue hall can be difficult for a Holocaust survivor who once had to wait in line for meals, not knowing if any food would remain by the time their turn arrived.

This is why professionals who work with survivors have been adopting a new approach called person-centered, trauma-informed (PCTI) care. The idea is to offer services in a way that takes into account a person’s history of trauma and avoids triggering that trauma anew. The PCTI framework is meant to empower survivors and other older adults to make choices about the care they receive.

Jewish agencies are at the forefront of this movement thanks to significant support from the Jewish Federations of North America, which recognized the efficacy of the new approach early on and is funding efforts to spread it widely. Now other institutions that work with once-traumatized populations are adopting these protocols, too.

“PCTI speaks to the sensitivity and awareness of individual clients’ needs,” said Adeena Horowitz, managing director of the Holocaust Survivor Program at New York’s Selfhelp Community Services Inc., one of the Jewish Federations-funded agencies using this new approach. “Our staff is specifically trained on how the impact of their earlier life trauma manifests itself today. It’s extremely important that we not retraumatize them. We have to be aware of those triggers.”

For example, Horowitz said, “if a survivor was in a concentration camp and has dementia, trying to get them to take a shower may upset them because everyone knew that meant you would be gassed.”

Using the person-centered, trauma-informed framework, staff or family caregivers would be sensitive to this and arrange activities such as showering, dental procedures, or attorney visits in ways that minimize triggers and make the individual feel safe.

Much of the work is carried out through the Jewish social service agency infrastructure supported by the Jewish Federations. The federations’ work with survivors is part and parcel of their mission to serve as the backbone — often unseen — of the North American Jewish community.

Earlier this year, the Jewish Federations’ Center on Holocaust Survivor Care and Institute on Aging and Trauma awarded 55 grants totaling $5.3 million to organizations across the United States. The money funds social services for thousands of Holocaust survivors, diverse older adults with a history of trauma, and their family caregivers. In turn, the local service providers spread the PCTI approach to other populations.

Shelley Rood Wernick, managing director of the Center on Holocaust Survivor Care, said Jewish Federations are working with the federal government and generous philanthropists to make PCTI care the universal strategy when interacting with anyone over 65. It’s one of the areas where Jewish Federations are reshaping how the community engages with people in their older years.

“We know that as people age, trauma from the past impacts them differently,” Wernick said. “If you have to use a walker or a wheelchair, you know you’re vulnerable, and you can no longer run away from a threat.”

That’s why, for example, when planning a community meal for people who may have experienced extreme hunger, she said, “a PCTI approach would have plated meals and to-go boxes on the table so there’s an expectation that there will be an abundance of food. That’s a low-cost example of systemic change.” 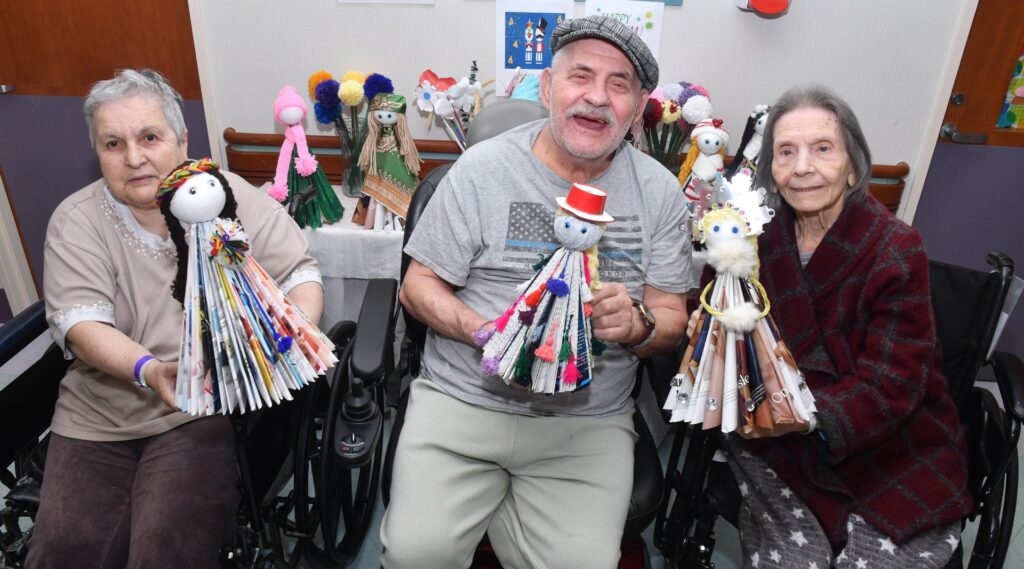 Residents in the Memory Care division of the Menorah Center for Rehabilitation and Nursing Care in Manhattan Beach, Brooklyn, showcase their hand-crafted dolls created for Purim, March 2022. Holocaust survivors are among the center’s residents. (MJHS Health System)

Since its establishment in 2015, the center has assisted 35,000 Holocaust survivors, as well as nearly 5,000 older adults with a history of trauma and 6,000 family caregivers. It also has trained 16,000 professionals and volunteers on PCTI care.

The PCTI approach doesn’t only apply to Holocaust survivors. It’s being adapted for use with other groups, too. The Center funds programs for older Asian-Americans refugees, older LGBTQ+ people, African-Americans who have experienced systemic racism, survivors of domestic violence and grandparents raising grandchildren.

Some 10,000 survivors have access to the agency’s services, which include wills, power-of-attorney documents and advance healthcare directives. Talking with survivors about these things needs to be handled delicately, staff say.

“Engaging in conversations regarding end-of-life planning involves discussions related to incredibly sensitive questions such as disposition of bodily remains, cremation, and burial, in addition to discussion of personal finances and disclosing how much money a survivor has in their bank account,” said Diego Cartagena, CEO of Bet Tzedek. “For some survivors, these discussions can be triggering. It’s for this reason that it is imperative that volunteers who work with survivors to complete end of life documents be trained in the PCTI approach and thus avoid retraumatizing those they seek to help.”

“We knew that the lack of food during COVID was going to be a trigger, given their trauma as Holocaust survivors,” said program director Carly Bruski. Her office established a partnership with Netcost, a local Russian ethnic grocery chain, to deliver “culturally specific” foods to Holocaust survivors.

“We made sure the principles of PCTI were embedded in our agency culture — not just for clients but for each other and staff, ensuring that we operate from a trauma-sensitive place at all times,” Bruski said. “We’ve become the area’s go-to for community training on trauma and aging.”

For some Holocaust survivors who immigrated to the United States from Ukraine, watching the scenes of devastation from the current war in Ukraine has been triggering. Steve Zakusilo, a program manager and social worker at JFCS who grew up in Ukraine, said anxiety over the war has affected survivors’ sleep schedules and mental health.

“For people who grew up in Ukraine, it’s a triple trauma, because not only is it happening to their country right now, but it reminds them of what happened in their time. It’s in their face 24/7. For some of them, it’s very hard to switch that button off,” Zakusilo said. “But when you speak their language, and when you’re familiar with the culture of the former Soviet Union they grew up with, you take the anxiety away.”