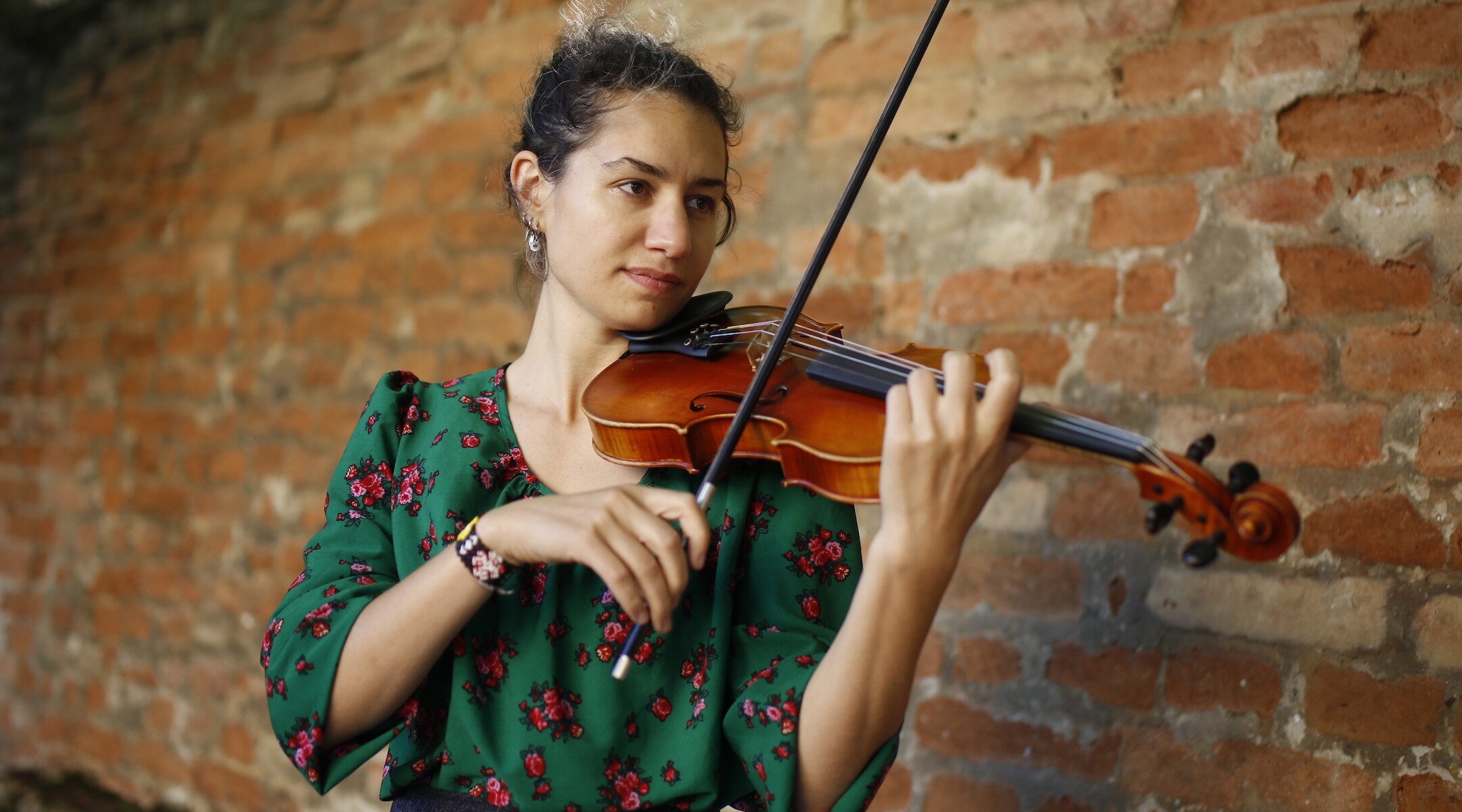 (New York Jewish Week) – Before the Holocaust, Cluj, Transylvania’s unofficial capital, was 13% Jewish — about the same percentage of Jews as are in New York City today.

“I think of New York now as a very Jewish-seeming place, and it’s 13% Jewish. So then I think, ‘okay, Cluj used to have that feeling,’” says violinist and composer Zoë Aqua. “Jews in Transylvania were historically Hungarian speakers, so you wouldn’t necessarily be walking down the street and hear Yiddish, but the city had a Jewish presence and it was part of the culture,” just like New York today.

Those sort of connections — across Eastern European cultures and between Jewish communities then and now — have inspired Aqua’s first solo album of original compositions. “In Vald Arayn” (Into the Forest), which will be released Sept. 1, reflects Aqua’s immersion in Transylvanian folk music in Cluj, Romania, where she is living through spring 2023 on a Fulbright research grant.

In particular, she is studying the way musical folk traditions are passed on from generation to generation.

Aqua, 32, was a founding member of Tsibele, a five-person band led by women, queer, and nonbinary musicians, and released the album “In Droysn iz Finster” (It’s Dark Outside) in 2017. The next year, as part of the klezmer duo Farnahkt with accordionist Mattias Kaufmann, she released the album “Ultraviolet.” She has performed with Michael Winograd’s The Honorable Mentshn and as an understudy violinist for the show “Indecent” on Broadway.

And while Aqua has been working as a composer, teacher and violinist in the klezmer space for nearly a decade, she hesitates to describe her upcoming album as exclusively klezmer, and explained that it is also influenced by Transylvanian folk music. The album’s title is itself a play on the name Transylvania, which means “beyond the forest” in Latin.

Though all of the 11 songs on the album were composed by Aqua, she collaborated with local Hungarian and Transylvanian musicians — Attila Fenyvesi, László Zsikai and Gergely Réman — who introduce instruments like the cimbalom (which is played like a dulcimer) and the brácsa (similar to a viola) not typically seen in North American klezmer. Aqua’s sister Annie, who is also a violinist, accompanies her on many of the tracks.

“I’m really excited for American audiences to hear this Transylvanian string band sound because, especially for klezmer audiences, it’s a bit different from what we normally hear, both rhythmically and in terms of the instruments used,” Aqua told the New York Jewish Week during a Zoom interview.

It’s not necessarily Jewish music that Aqua is studying, but there is a Jewish element to it, one of long-lasting, community-based tradition. “The main reason why I wanted to go to Transylvania is that they still have these unbroken musical lineages and people from these musical families that learned father to son down the generations,” Aqua explained. “We used to have these same types of musical families in klezmer music, especially in Eastern Europe.”

Aqua said that the Transylvanian music she studies in Cluj doesn’t overlap with klezmer tunes as much as other folk tunes in other Eastern European regions do. She plans to use her next year of research to explore, especially with older musicians still in Cluj, how they and their families’ traditions were influenced by Jewish musicians. 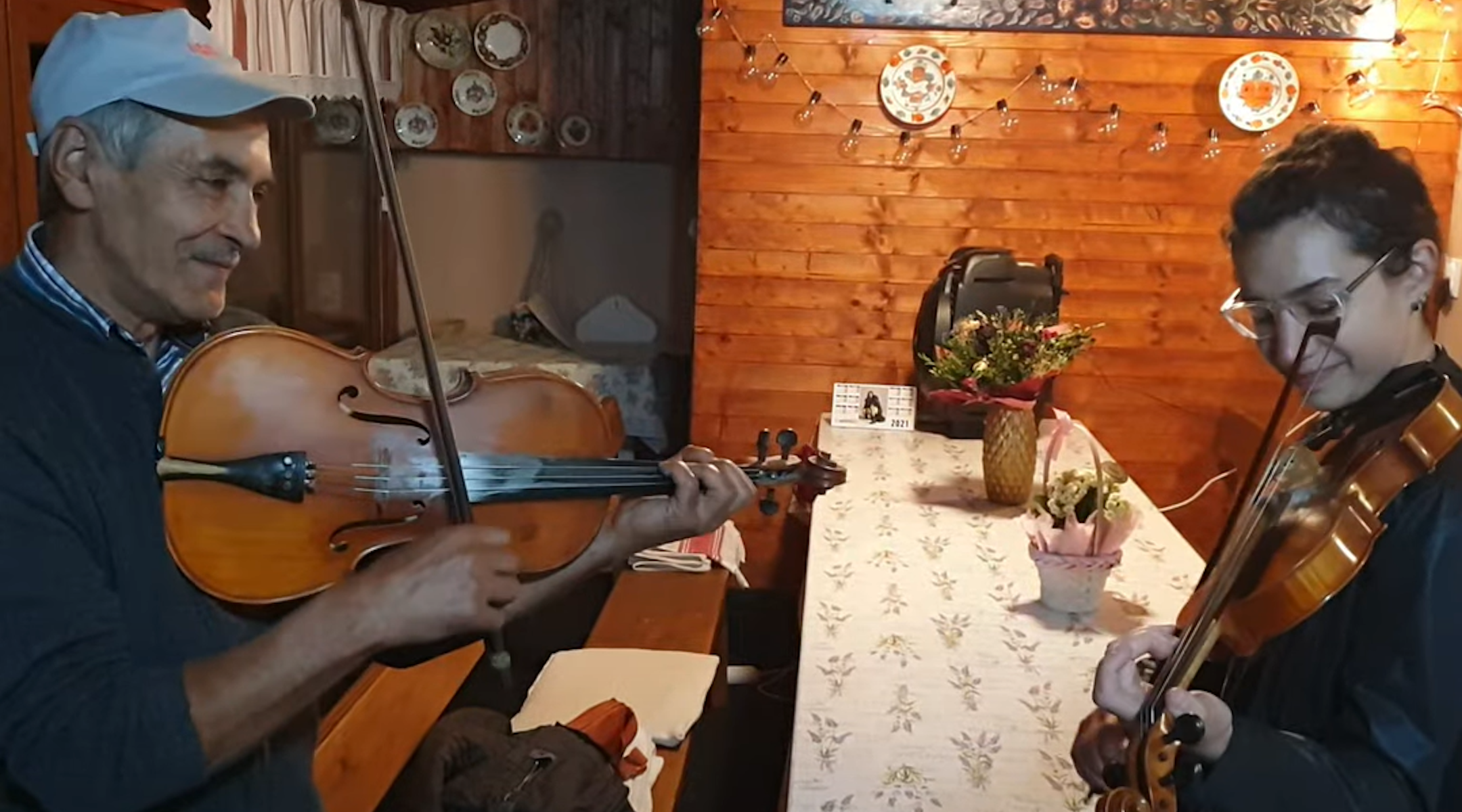 Included in that revival is the music label Borscht Beat, which is releasing her album. The label, started earlier this year by Brooklynite Aaron Bendich, promotes contemporary Jewish, Yiddish and klezmer music. Bendich emphasizes that he sees his role as a continuation of a musical tradition, not a revival of one.

“In Vald Arayn” is the fourth album on the Borscht Beat label.

“I am most excited by this magical mix of newness and oldness, past and present,” Bendich told the New York Jewish Week. “This is a truly unique album. The compositions are all brand new, original and from Zoë’s mind, but they sound so authentically traditional, as though they come from the Jewish Transylvania of 100 years ago.”

Aqua is also taking part in a movement to diversify and update who has access to klezmer. She teaches klezmer music at the Brooklyn Conservatory, Yiddish New York. For this interview, Aqua joined the call from Klezkanada, a Montreal-based organization that fosters Jewish and Yiddish arts, where she is teaching workshops throughout the week.

“Old school klezmer music, especially in Europe, was all men,” Aqua explained. “We’re rebuilding a scene here that, in a lot of ways, was a broken chain of transmission. We can now make choices about how we want to make this scene more inclusive and get more women and gender non-conforming people involved, and not only get them involved, but allow them to be able to be leaders.”

Aqua said she is most excited to learn what listeners take away from her album and what type of connection they will feel to the Yiddish, klezmer, Hasidic, Hungarian and Romanian influences that she “put in a blender.”

Part of the answer came this past week at this summer’s Klezkanada retreat in Quebec.

When Aqua previewed the album during a night session, “people were dancing,” she said.

Listeners can listen to a sample of “In Vlad Arayn” and pre-order the album on the Borscht Beat bandcamp site. The full album will be Sept. 1.