Eating grasshoppers for Israel: On the bus with the army of pro-Israel TikTok influencers 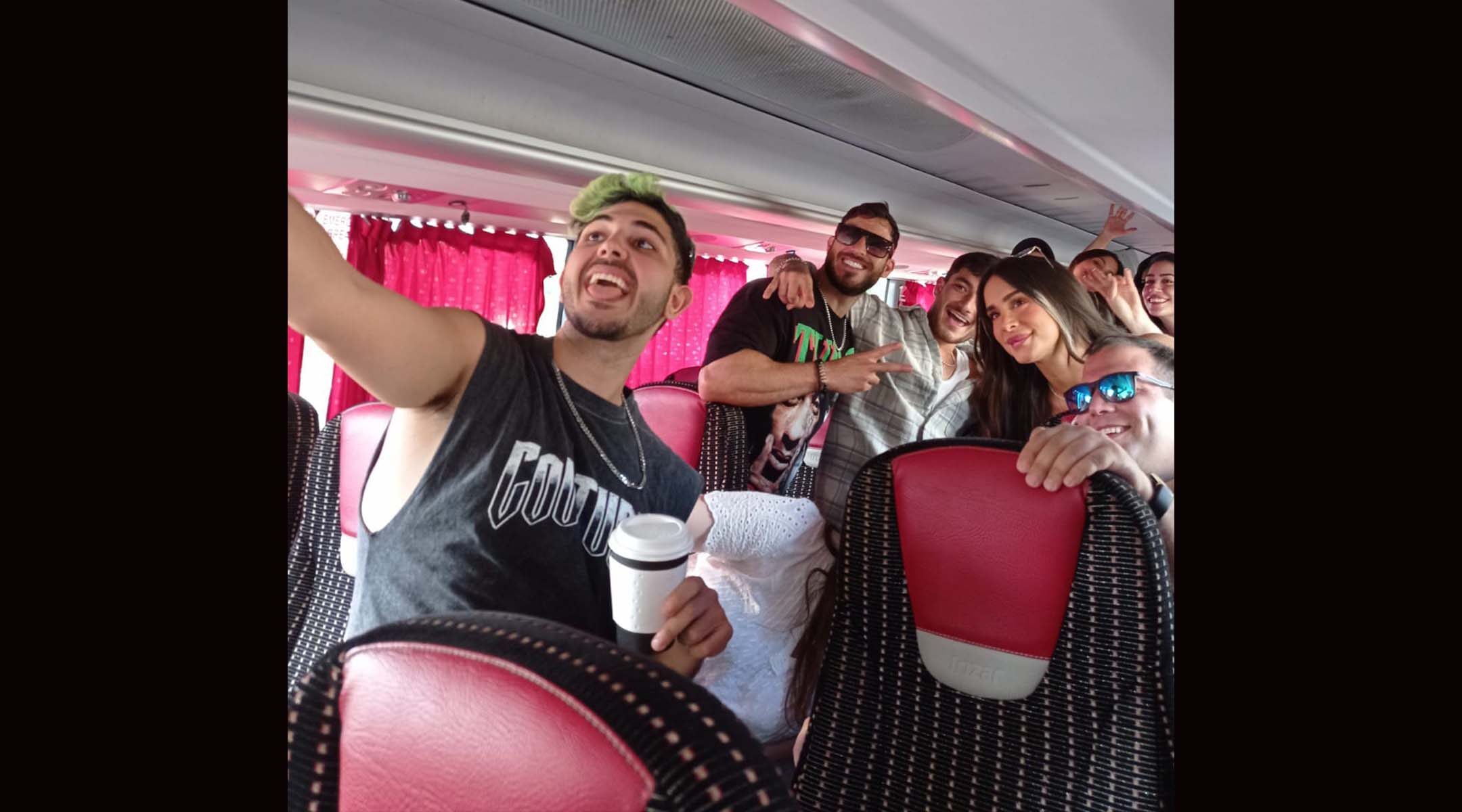 (JTA) — A group of fired-up 20-somethings crush together in the aisle of the bus, singing at the top of their lungs, “WE’RE GOING ON A FIELD TRIP!,” while pouting for the dozen or so iPhones set to selfie mode.

It’s 7 a.m. and far too early for this level of pep. But pep is the name of the game in the influencer business, and this group of 16 Israelis have an endless supply to share with their combined following of 32 million social media users around the world.

The bus driver tells the guy with hair the color of cycling shorts to sit down for the tenth time, while the girl with the immaculately applied contouring asks, once again, when the next “poop break” is. The trip, which took place at the end of June and was paid for by the Jewish National Fund USA, feels more like an end-of-year school outing than a carefully curated excursion aimed at encouraging tourists to “Go North.”

Histrionics aside, these influencers are deeply savvy and know exactly just how hammy to behave when it comes to creating a viral TikTok video for any given scenario. For a trip like this, which aims to showcase the culture, coexistence and culinary scene of Israel’s north, the content is light and glossy. At one stop, a gaggle of tween girls crowds around Eviatar Ozeri, who has garnered close to 10 million followers largely thanks to his hilarious exchanges with his chihuahua Niki (who has more than 1 million followers in her own right), and he happily poses for selfies with each of them. 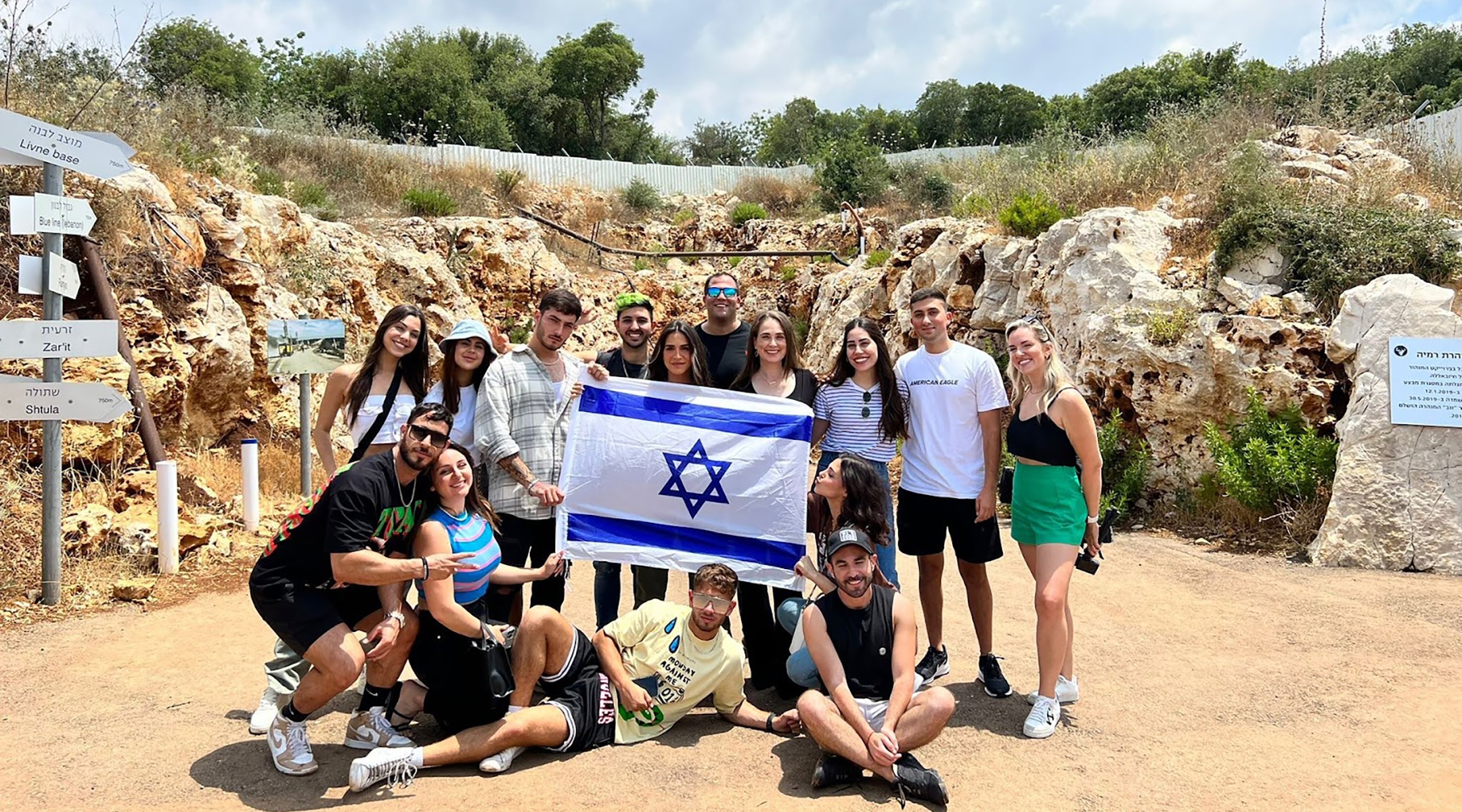 After visiting a tunnel dug by a Lebanese terrorist and discovered by Israeli forces, social media influencers posed for a group photo right after filming a reel of them yelling “fuck Hezbollah.” (Leehie Shina)

“I like giving my message by making fun of myself and acting stupid — people connect to it,” said Ozeri, who was hired by former Israeli prime minister Naftali Bennett during his 2021 election campaign in a bid to draw younger voters (Niki and Bennett featured in a social media reel together).

Ozeri and the rest of the influencers on the bus may very well be Israel’s most advanced weapon in its war of hasbara, the Hebrew term for public diplomacy, the only battlefield where Israel feels it is losing. Harnessing the enthusiasm and the tremendous reach of these digital warriors is supposed to help deliver a message that official Israel has thus far failed to convey, of a cool, peace-loving nation, eons away from the conflict zone depicted on cable news channels.

A visit to a cross-border tunnel dug by the Lebanese Hezbollah terror group is an excuse for merriment, as the influencers pose for a group reel, flip the bird and yell, “F— Hezbollah!”

During times of actual conflict, they move into high gear. Their daily content is varied and specialized — one posts about no-makeup makeup, another about water-to-wine chemistry experiments, another about girls with guns — but during flare-ups with the Palestinians their messaging is uniform and usually involves some iteration of Israel’s right to defend itself.

“Bella Hadid, I’m back and so are my facts,” Shiraz Shukrun said in a recent post addressing the Palestinian-American supermodel. “You’re such a busy model and have zero time for research, so it’s not your fault.” Using the hashtags #stopfakenews and #Israelunderattack, Shukran hoped to counter a post by Hadid that blamed Israel for the death of several Palestinian children, an incident Israel says was due to a misfired rocket.

The global value of influencer marketing in 2021 was estimated at $13.8 billion by Influencer Marketing Hub, and American influencers can reportedly command $20,000 or more for a single promo reel. Yet none in this Israeli crew receives a penny from either JNF USA or the MFA for their content promoting Israel. They say they feel compelled to do it anyway.

“I started posting [pro-Israel] content out of frustration,” said 20-year-old Guy Rabi, whose 3.1 million followers watch his alter ego @coolchemistryguy blow up gummy bears and melt various other substances. “The lies were pissing me off so I just began reacting to anti-Israel posts.”

Rabi paid no small price for his activism. The top city in Rabi’s following was Tehran; his first story on Israel lost him 20,000 followers in one fell swoop and death threats have slid into his DMs on more than one occasion. 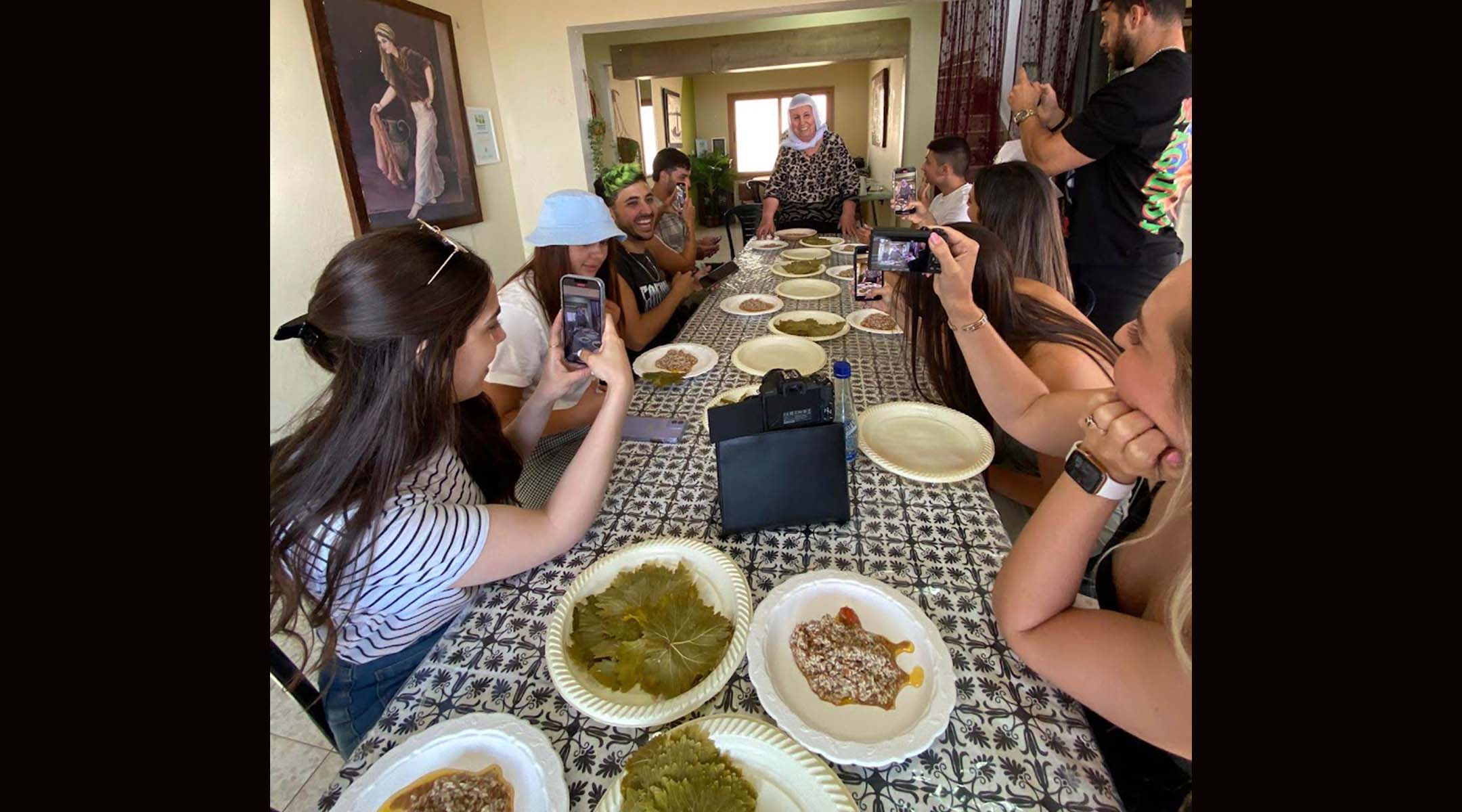 Participants of the influencers’ tour direct their phones at Maha Amer, a Druze cook known as “Savta Maha” (Grandma Maha) as she teaches them the art of making stuffed vine leaves. (Leehie Shina)

At 33, Idan Matalon is one of the older of the group’s digital creators, attested to by the fact that he has the most followers on Facebook — the dinosaur of social media platforms. Most of Matalon’s content is in Spanish, having picked up the language from telenovelas, like many Israelis of his generation. He launched his digital career when Instagram was still in its infancy over a decade ago by asking people to say “I love Israel” in Spanish.

“These days, though, it’s all about TikTok,” he said. “TikTok is the greatest hasbara tool for the Arab world and all the incitement [against Israel] comes from TikTok. Fighting it is impossible, because there are so few of us and so many of them. Our only strength is that we’re putting out classier content.”

Some American Jewish social media warriors have dedicated their feeds entirely to fighting antisemitism and criticism of Israel. The Israelis tend to take a more integrated approach, weaving pro-Israel messages alongside their existing content.

Dekel, whose quirky skincare routines and lack of last name are incongruous with her training as a biomedical engineer, maintains that there is no reason that reels on butt acne can’t share the same social media real estate as pro-Zionism posts.

“It’s who I am, these are my values and I want to portray that,” she said.

Dekel, along with the rest of the influencers on the JNF USA trip, are part of a Ministry of Foreign Affairs initiative called the Israeli Influencers Dream Team. According to the ministry’s senior director for digital strategy and partnerships Ido Daniel, they wanted to help “fight the good fight” for Israel and combat fake news and trolling online but didn’t know how.

“We provide them the platform and the ability to know better and to create content that is Israel-related as they please,” Daniel said. “We do not ever tell them what to post, we only provide them with information and answer their questions. They are the experts about the actual content.”

The relationship is already bearing fruit: When veteran Al Jazeera journalist Shireen Abu Akleh was killed during an IDF raid in Jenin, Dekel turned to Daniel’s team for help creating a video explaining Israel’s side of the story.

But it’s not just crisis management where the influencers are seen as an asset. The program includes training sessions and briefings, matching Israeli influencers with influencers overseas, and tours around the country, such as the trip to Israel’s north — where JNF USA’s ultimate goal is to attract 300,000 new residents by creating employment and economic development opportunities, as part of its “One Billion Dollar Roadmap for the Next Decade.”

The JNF bus arrives in Kiryat Shmona, a working-class city near the Lebanon border, for a tour of Margalit Startup City Galil, venture capitalist Erel Margalit’s food tech center. The tour provides plenty of Insta fodder, from grasshopper-eating competitions to slurping sessions with straws made from straw.

The next stop is Buza, a boutique ice cream chain, which in the past partnered with Margalit-funded InnovoPro to create vegan ice cream from chickpea protein. The trip to Buza (ice cream in Arabic) is also a chance to showcase Israeli coexistence. Founded by an Arab Muslim and a Jew, the Galiliean ice cream company now has six shops all over Israel. According to the store’s Christian Arab manager, when riots broke out in mixed Arab-Jewish cities during the Gaza conflict in May 2021, Jews and Arabs alike flocked to the shop in a show of support. 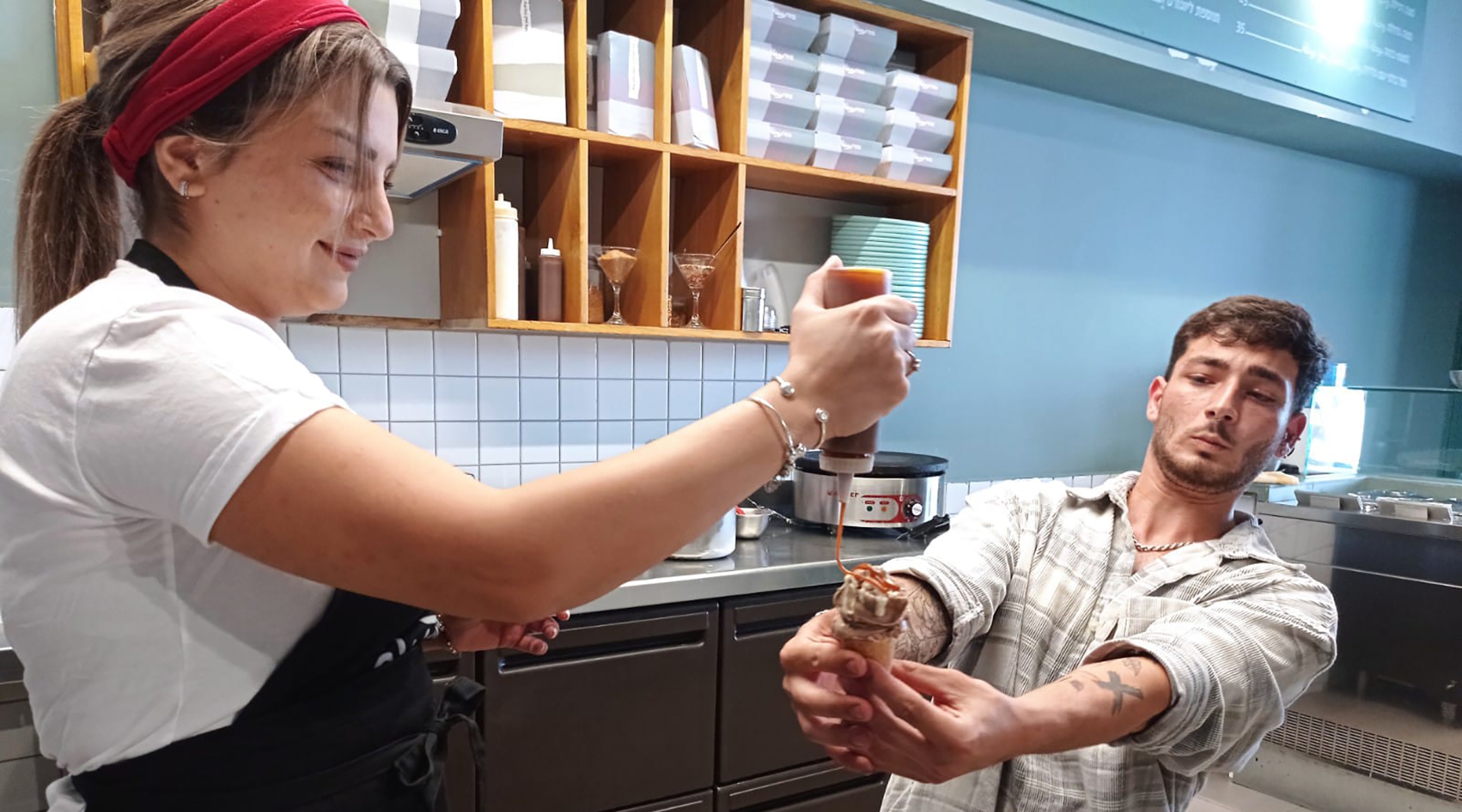 The Dream Team doesn’t exactly blend in in Kiryat Shmona, and it isn’t long before a group of overexcited Arab schoolchildren swarm them for selfies. At one point, a man with an oversized tattoo on his forearm rolls down his car window to scream with delight at the sight of Orin Julie, an influencer who calls herself the Queen of Guns and who has more than a passing resemblance to the iconic Tomb Raider character Lara Croft. His brakes screeching, the man jumps out of his vehicle and hugs an elated Julie.

A former commander in the elite Golani unit, Sharon Tsur tells Julie he has been an avid fan since she began her social media journey, telling the world how she fought to be accepted into a combat unit despite her low medical profile.

Today, Julie is both an ardent women’s rights activist and gun rights activist. “Americans love the story of the nice Jewish girl in the army,” she said.

For JNF USA, the idea behind the trip is to bring more people to spend time in the north, and not necessarily for day jaunts as tourists. According to the group’s Israel-based head of communications, Yael Levontin, while tourism is a big driver for development in Israel’s north, the region actually loses money if people only stay for a few hours. Convincing people to spend several days, or to consider making a permanent move, yields much more fruit economically.

While the precise return on marketing investment for JNF USA is unclear (it would be a stretch to assume that viral videos are enough to galvanize people to uproot their lives and move to the north), the trip opened the nonprofit to new audiences. The Dream Team uploaded a total of 287 posts over the two-day visit, and according to Levontin, reached thousands of new accounts through their platforms, drawing engagement and new followers to JNF USA’s own pages.

At least anecdotally, the exposure benefited Israel’s image. According to Ozeri, it broke stereotypes about Israel and the conflict. The TikToker dedicated a series of stories to a visit at the home of Savta Maha, a naqab-clad Druze woman who serves traditional Druze cuisine (that’s also kosher) — a mashup that he said one Turkish follower deemed “very cool.”