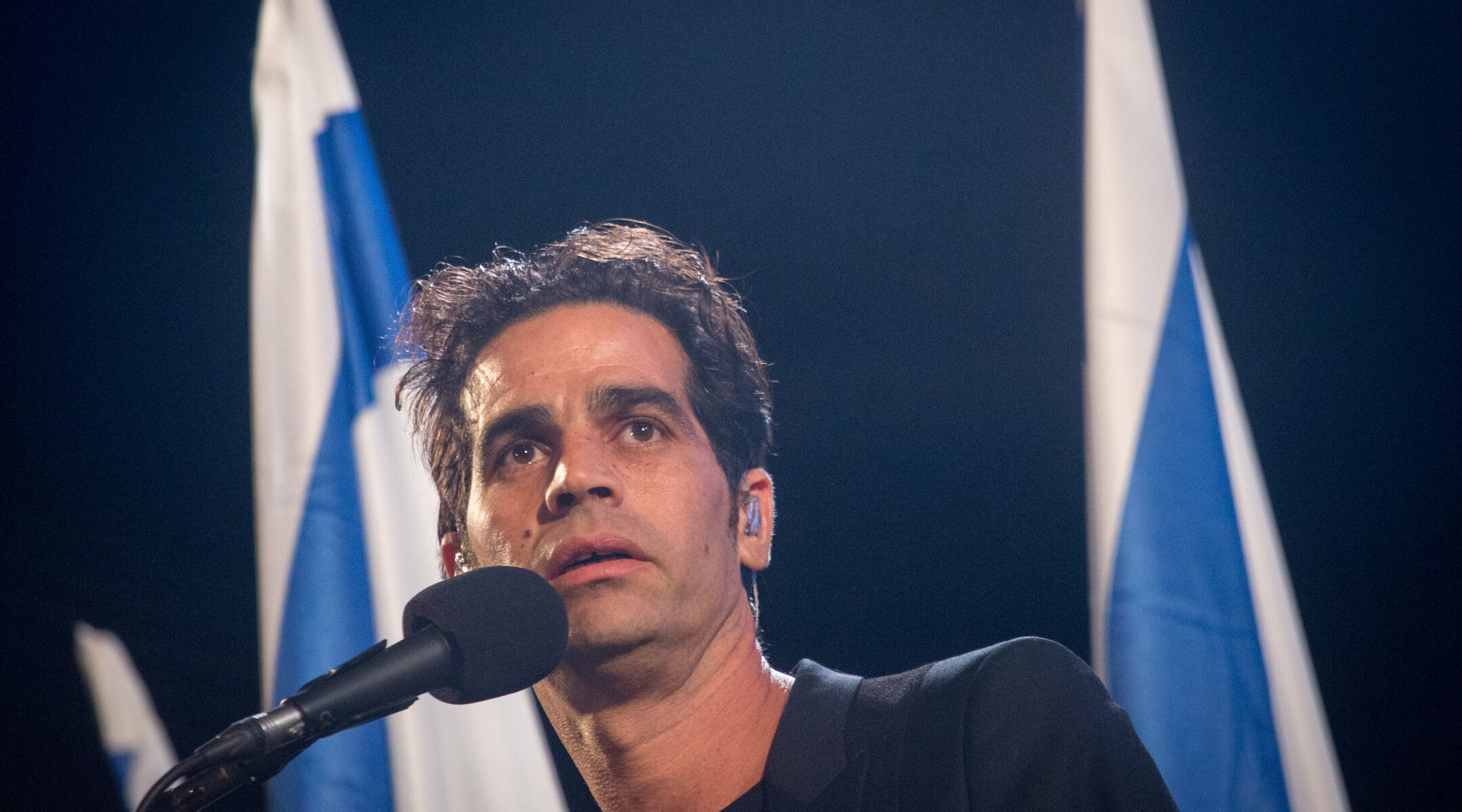 (JTA) — Israeli rock star Aviv Geffen, a symbol of the country’s left, announced during a recent concert in the West Bank that he regretted his past criticism of settlers living there — whom he had long denounced as obstacles to peace.

“It’s very moving to be here. I went through a personal journey that was not simple and not short and I understand that me and my brothers — you — were made to separate for any number of reasons including my ignorance, which came from a desire to please part of my audience,” Geffen said during a concert Aug. 24 in Beit El, the settlement championed by David Friedman, the Trump administration’s former ambassador to Israel.

“I spoke from ignorance and I did not understand the other,” Geffen added. “I’ve matured and I want to ask your genuine forgiveness from my heart.”

Geffen’s West Bank concerts and comments offer a potent sign that the settlements, seen internationally as a barrier to peace and considered illegal under international law, have become politically mainstream in Israel.

That was not the case in 1995, when Geffen vaulted into international view after he was the last person to embrace Israeli prime minister Yitzhak Rabin before Rabin was assassinated by a right-wing extremist angry that he had agreed to give up parts of the West Bank in an attempt to make peace with the Palestinians. The assassination took place at a Tel Aviv concert organized by Rabin’s liberal supporters, including Geffen.

Onstage, Geffen attributed his evolution to what he said was a friendship with Ayelet Shaked, a right-wing politician who is currently Israel’s minister of the interior. She responded on Twitter, saying, “Aviv, I am glad that I helped enlighten your eyes to all the good in this community, salt of the earth, I hope your voice will contribute to increasing unity and free love in our wonderful nation.”

Geffen also donned a knit kippah of the type favored by religious Zionists — a meaningful move in a culture where the style of a man’s head covering is a signifier of his political ideology — before performing with Avraham Fried, a popular Hasidic Orthodox singer. Fried and Geffen struck up a friendship early in the pandemic, after Geffen expressed sympathy during an online concert toward the Orthodox city of Bnei Brak, whose residents had been hard hit by COVID-19.

Geffen performed at two different settlements, each with strong religious Zionist bona fides: Kedumim, home to Bezalel Smotrich, a right-wing politician who wants Israel to be governed by Jewish law, and Beit El,  a self-described conscientious objector in a country where military service is mandatory, Geffen also performed for the first time at Israel Defense Forces bases in recent months.

Geffen’s comments come as Israel nears an election — its fifth in three years — in which Shaked is leading a new party, Zionist Spirit, that could determine whether former prime minister Benjamin Netanyahu returns to office. Beyond that question, it appears clear that more Israelis are planning to vote for right-wing parties that oppose any concessions when it comes to the West Bank.

“The center has been sliding right and the rhetoric is now focused on who is the “authentic right,'” sociologist Or Anabi wrote in an analysis distributed Tuesday by the nonpartisan research center Israel Democracy Institute.

While Shaked and other right-wing figures celebrated Geffen’s comments, they drew criticism and sadness from the left. Writing in the liberal newspaper Haaretz, Carolina Landsmann connected Geffen’s change of heart to a dispute between the city of Tel Aviv and the national ministry of education about whether schools can display maps delineating where Israel’s 1967 borders end and where the settlements begin. The government says such maps are prohibited, but many Tel Aviv schools nonetheless plan to display them when classes begin this week.

“Without the two-state solution on the horizon, there is no longer significance to the old political division or to the ideological dispute around the future of the West Bank and the settlement project,” Landsmann wrote. “The erasure of the Green Line was the real, unstated price of the ‘government of change’ that the Tel Avivians created along with the settlers. Gefen, from this perspective, is not at all avant-garde. He is a conformist who now toes the ideological line.”

In his comments during the Beit El concert, Geffen acknowledged the magnitude of his presence.

“Being here today in Bet El is something I would not have dreamed of several years ago and I am so glad to be with you here in love and in honor,” he said. “I ask you what I ask from myself: only unity, enough with incitement, to understand that we are real brothers. Thank you for inviting me here and I love you.”