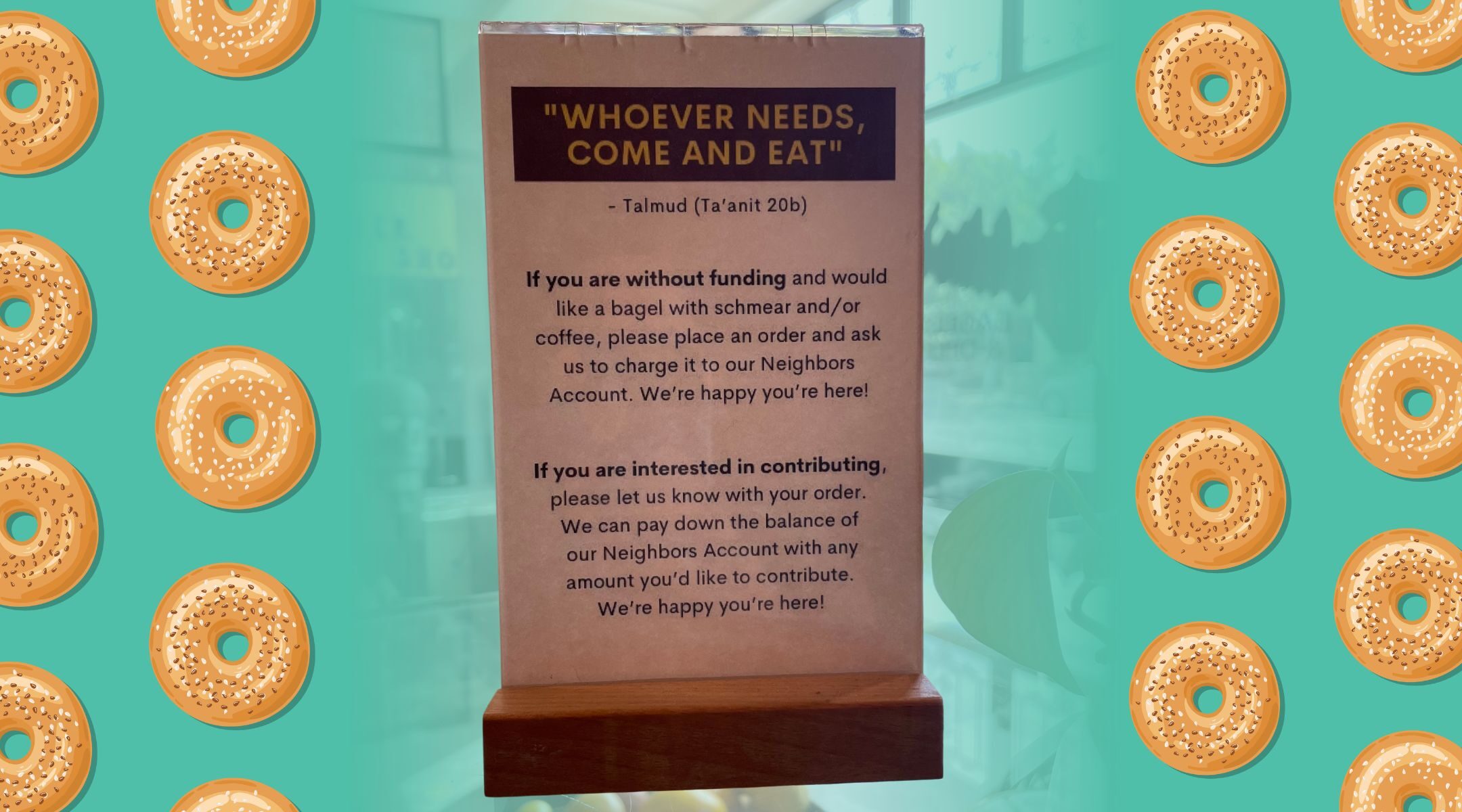 Goldie's Bagels in Columbia, MO is giving away free bagels and coffee to those who cannot afford to pay. (Image courtesy of Amanda Rainey / Design by Jackie Hajdenberg)
Advertisement

That’s the quote from the Talmud — the book of Jewish law — that welcomes customers to Goldie’s Bagels in Columbia, Missouri, telling them that people who cannot afford to pay can get a coffee and a bagel, with cream cheese, free of charge.

The promise is core to the shop’s mission: Launched as a popup in 2020, Goldie’s aims to imbue Jewish values into its daily operations.

“My whole thing in opening Goldie’s is we’re going to be so outwardly proud to be Jewish,” founder Amanda Rainey told the Jewish Telegraphic Agency this week, after a sign about the “Neighbors Account” initiative went viral on social media.

Rainey, who previously worked as a Jewish educator at the Hillel at the University of Missouri, first opened Goldie’s inside Pizza Tree, a restaurant owned by her husband. It moved to its own location last winter, bringing along a sourdough starter that’s used in its bagels. (Per baking tradition, the starter has a name — Seymour.)

In addition to bagels, Goldie’s serves traditional Ashkenazi desserts such as babka and rugelach. Its Instagram account showcases fluffy round challahs; egg sandwiches made with zhug, a spicy condiment that originated with Yemenite Jews;  and “tzitzel bagels,” a rolled-in-semolina confection that’s unique to St. Louis. (It’s not kosher: There’s a sandwich with both meat and cream cheese on the menu.) The wifi password is “MAZEL TOV.” And this spring, the shop hosted a Passover seder for its staff.

The seder inspired the sign. The principle of feeding the needy is so ingrained in Jewish tradition that the Talmud quote posted at the counter is traditionally recited in Aramaic at the seder, when the Israelites’ exodus from Egypt is recounted.

Goldie’s had already been handing out free bagels to unhoused people in downtown Columbia, just as Pizza Tree had been doing with slices. And it had already been subsidizing that effort with donations that other customers made informally. “Sometimes people would slip us some cash awkwardly,” Rainey recalled.

But after the seder, a staff member suggested explaining the initiative and citing the quote from Talmud on a sign in the store. The sign explains that customers who cannot pay can ask the staff to charge their meal to the “Neighbors Account.”

After the sign went viral, people from around the country offered to donate, Rainey said. But she said Goldie’s is committed to keeping everything local.

“We have so many generous people in our community,” Rainey said. “Those people should give money to somebody where they live; their own neighbors.”

Rainey says the shop gets maybe two $5 donations a day, which help pay down the balance of the account, and the store doesn’t take donations unless there’s an outstanding balance. She hopes the initiative will encourage other restaurants in the area to take on something similar. During the pandemic, other businesses began offering free meals to families with children, and mutual aid groups serve people who are unhoused.

But the point of the Neighbors Account is to welcome people into the store — and give them more than just a meal.

“It’s a bagel and a coffee but when you’ve slept on the street at 7 a.m., a bagel and a coffee is really helpful,” Rainey said. “And also we learn people’s names, we check in on them. We treat them like people. And then other people in the community see that and hopefully are inspired to act better.”