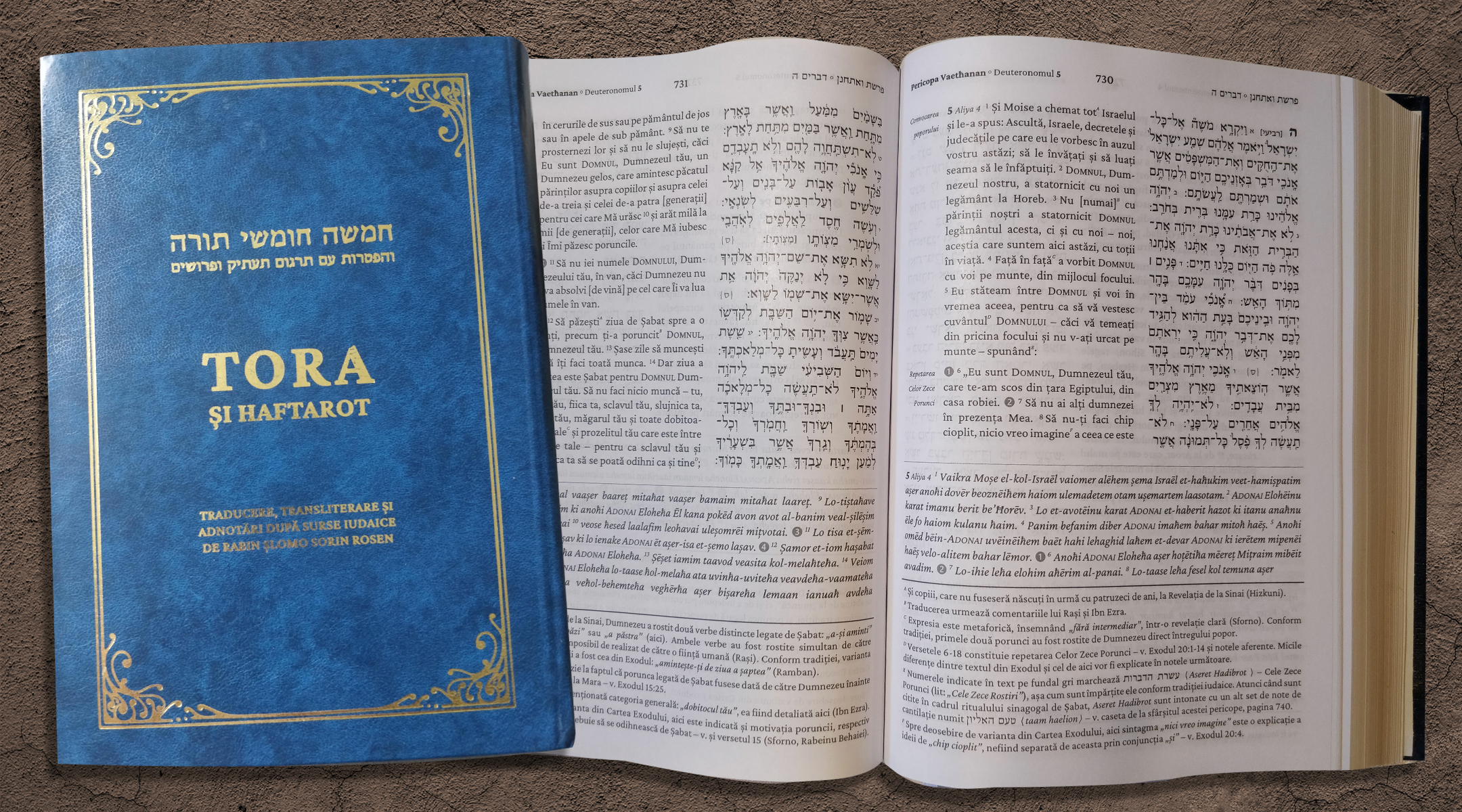 Sorin Rosen has both translated and transliterated the text of the Torah into Romanian. (Courtesy of Rabbi Sorin Rosen/Design by Mollie Suss)
Advertisement

(JTA) — As a Modern Orthodox rabbi who works at a Jewish day school in Montreal, Sorin Rosen knows his way around a prayer book. But that wasn’t always the case.

“I remember when I was a kid, and I started going to synagogue, I probably kept my siddur upside down for three months until someone said, ‘Hey, look, this is how it works,’” Rosen recalled about an experience he had as a teenager in his native Romania.

Now, Rosen has created a historic tool to help Jews like that younger version of himself: the first-ever Romanian-language chumash, or text of the Torah. “Tora si Haftarot,” which is both translated and transliterated into Romanian, is being unveiled at a ceremony Sunday at Bucharest’s Choral Temple meant to celebrate both the book itself and Rosen’s seven-year effort to bring it into the world.

“I anticipated it would be a long project. I didn’t expect it to take that long, but I was prepared to make a long-term commitment,” Rosen told the Jewish Telegraphic Agency. “It’s something that was always close to my heart. …  I felt that if I can help people avoid that stage [of not knowing how to participate in Jewish practices] and facilitate their engagement, the endeavor was worthwhile.” 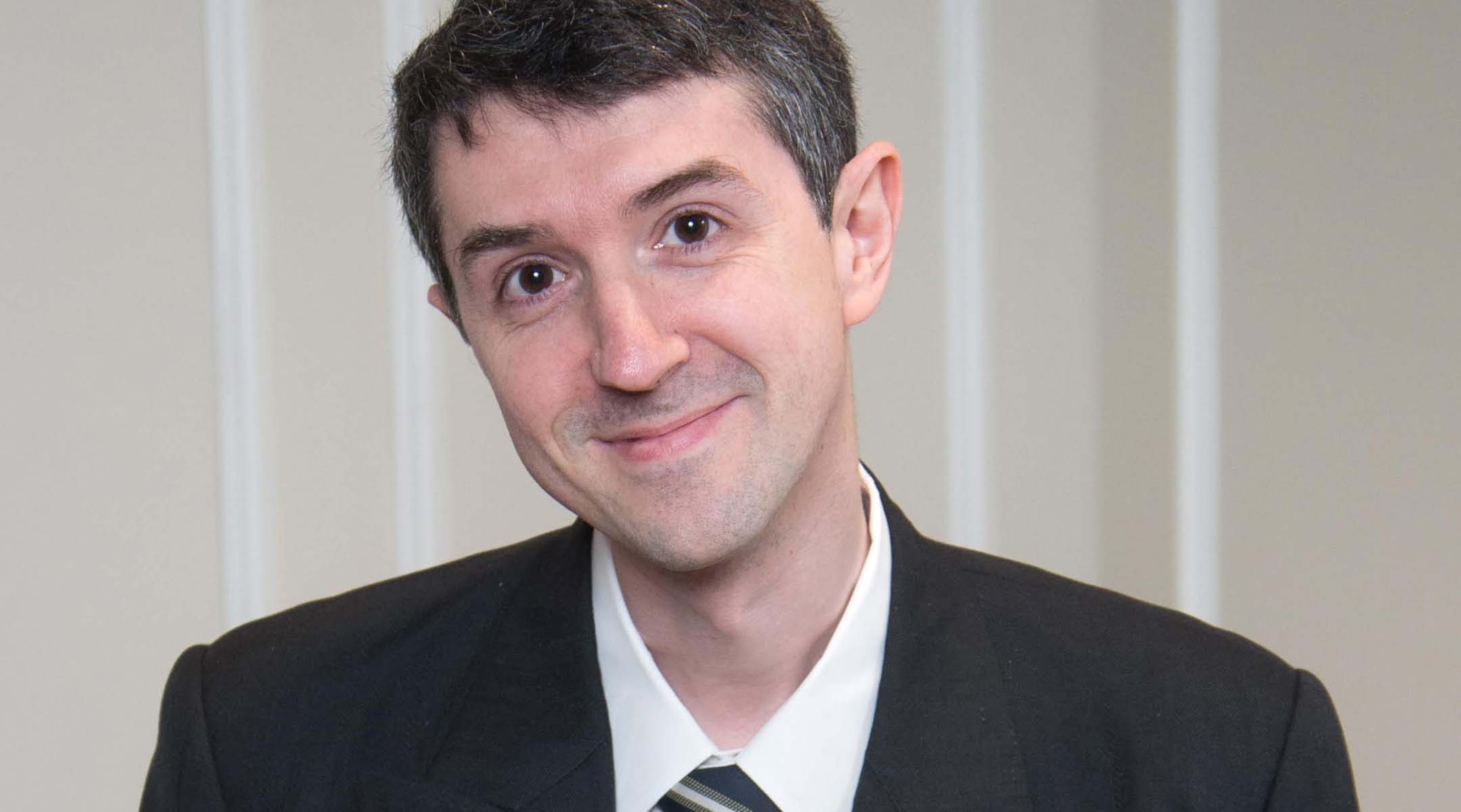 Rosen was chief rabbi of Romania by age 29. (Courtesy of Rabbi Sorin Rosen)

Rosen’s translation is his gift to a Jewish community he once led but ultimately decided he had to leave. Born in Bucharest to a Jewish father and Eastern Orthodox mother, Rosen got involved in Jewish life as a teenager, ultimately becoming the country’s head rabbi after graduating from Yeshivat Chovevei Torah, a Modern Orthodox seminary in New York City, in 2007. (He underwent a formal conversion to Judaism in Israel in 2000.) He was Romania’s first Modern Orthodox head rabbi and, at 29, the youngest chief rabbi in Europe.

But after serving out a three-year contract, Rosen and his wife set their sights on living somewhere with a more robust Jewish community. They headed to Montreal, where both work in education technology and the family has integrated into the city’s thriving Orthodox community.

“As my kids were approaching school age, I wanted to be able to give them choices and opportunities for Jewish education,” Rosen said. “Unfortunately, Romania is struggling in this department.”

Romania was once a center of Jewish life, with a Jewish population of about 800,000 before the Holocaust. Its antisemitic regime murdered almost all of the Jews in some parts of the country early on, but ultimately a majority of the country’s Jews survived — before leaving for Israel or elsewhere in the second half of the 20th century, when Romania was unusual among Communist countries for allowing Jews to emigrate freely. Today, fewer than 10,000 Jews are estimated to live in Romania.

“I suspect the number is much closer to about 5,000,” Rosen said, noting that Romanian Jews tend to be secular in orientation and many have married non-Jews. He added, “The community members are, for the most part, very dedicated to Judaism; participating in Jewish holidays and community events and trying to keep ‘the flame’ alight.”

Now, they will have “Tora si Haftarot” as a tool to help them, joining several other Romanian-language translations of Jewish texts that Rosen has produced over the last decade.

The chumash stands out in a number of ways: Although there are several Romanian translations of the Hebrew Bible, all are from a Christian lens. This is the first Jewish Romanian translation, and it features not only Hebrew text but also phonetic transliteration of the entire text in the Latin alphabet. There are also roughly 4,000 short explanations and annotations based on such classical Jewish commentators as Rashi and Ibn Ezra and texts including the Midrash and the Talmud.

“For the community in Romania this is a phenomenal thing,” said Rosen. “For as much as they may want to be involved Jewishly, many don’t know how to read Hebrew. Or if they do, their Hebrew skills are quite poor.”

While the entire project spanned seven years from ideation to completion, Rosen performed most of the work during the pandemic. He translated, transliterated and formatted the content singlehandedly, then enlisted his wife, Livia, and Montreal friends Mihnea Guttman and Bobby Shaul as editors. Once the book was press-ready, Rosen raised $13,000 in a few days via a GoFundMe campaign, enabling him to print 700 copies, a few hundred of which he has distributed as a donation to Jewish communities throughout Romania. Proceeds from sales of the rest are earmarked for reprints and similar projects.

“Honestly, though of course I believed in the project, I did not expect such a show of support,” said Rosen, who ultimately netted more than $17,000 in donations from more than 100 individual donors. “The knowledge that I was part of that and that my project enabled people to contribute to such a worthy and meaningful cause is truly amazing.”

About 250 people are expected to attend the official launch of “Tora si Haftarot” on Sunday, which Rosen will attend remotely from Montreal. He will speak briefly alongside Romanian Jewish community leaders, who say they see the chumash as a crucial tool for engaging their constituents.

“Rabbi Rosen has provided us with an invaluable gift of Torah, for which our community is very appreciative,” said Eduard Kupferberg, secretary general of the Federation of Jewish Communities in Romania. “With the publishing of the first-ever Romanian Chumash, we take another step in ensuring the Jewish future of our community and in keeping the Jewish flame alive in the consciousness and soul of our members.”

While Rosen’s chumash has been the biggest and most complicated project he’s undertaken to date, it is far from the first work he’s produced for the Romanian Jewish community. In 2001 he published a translated and transliterated Birkon Shabbat, a booklet containing Sabbath- and festival-related blessings and songs. That was followed by a Purim megillah (Book of Esther) and Passover haggadah in 2003 (a second edition was published in 2021) and the “Lemaan Achai” prayer book in 2011.

“Rabbi Rosen’s siddur opened the gates of prayer to those who cannot fluently read Hebrew and became the standard prayer book for the Romanian Jewish Community, as well as for countless other Romanian-speaking Jews,” said Rabbi Rafael Shaffer, Romania’s head rabbi. “In the same vein, the chumash translated by Rabbi Rosen deserves to become the standard translation of the Torah for all Romanian-speaking Jews, wherever they may be.”

Having amassed enough funds to print only 700 copies of “Tora si Haftarot,” Rosen is eager to raise more money to print a second edition, which he says will include edits from the first.

“There’s no such thing as a perfect translation,” he said.  “It’s just impossible. The moment you start translating, you automatically start interpreting. And we’re human; we make mistakes. There’s a typo here, a mistranslation there. On my website I will invite people to point out any edits they deem necessary which will be considered for the second edition.”

Launched in 2001, Rosen’s Romanian-language website contains hundreds of his commentaries on the weekly Torah portion, the Amidah prayer that is central to Jewish liturgy and other texts, as well as close to 500 answers to Jewish questions posed by visitors. The site’s associated mailing list has over 1,000 subscribers of all denominations.

Rosen isn’t stopping yet. “My plan is, God willing, to translate the entire Tanakh,” he said, referring to the expanded Hebrew Bible that also includes historical writings, books of prophecy and much more. He’s already working on a High Holiday prayer book, or machzor, in collaboration with Shaffer, a book of psalms and more.

For now, though, he is taking a moment to appreciate the texts that are already changing the way Romanian Jews engage with their tradition.

“I feel joy and gratitude to Hashem [God] and to my friends and supporters for being able to complete this work, and I feel humbled by the amazing support and encouragement I received,” Rosen said. “I’m elated that it came to light, so that it can be useful and hopefully bring some meaning and Jewish spark into the lives of so many. I strongly feel that if even one person is going to be inspired by this, it’s worthwhile.”

Correction: This story originally misstated the year of Sorin Rosen’s rabbinic ordination and other biographical details. It has been corrected.