Why didn’t the US save more Jews from the Nazis’ clutches? The American people were against it. 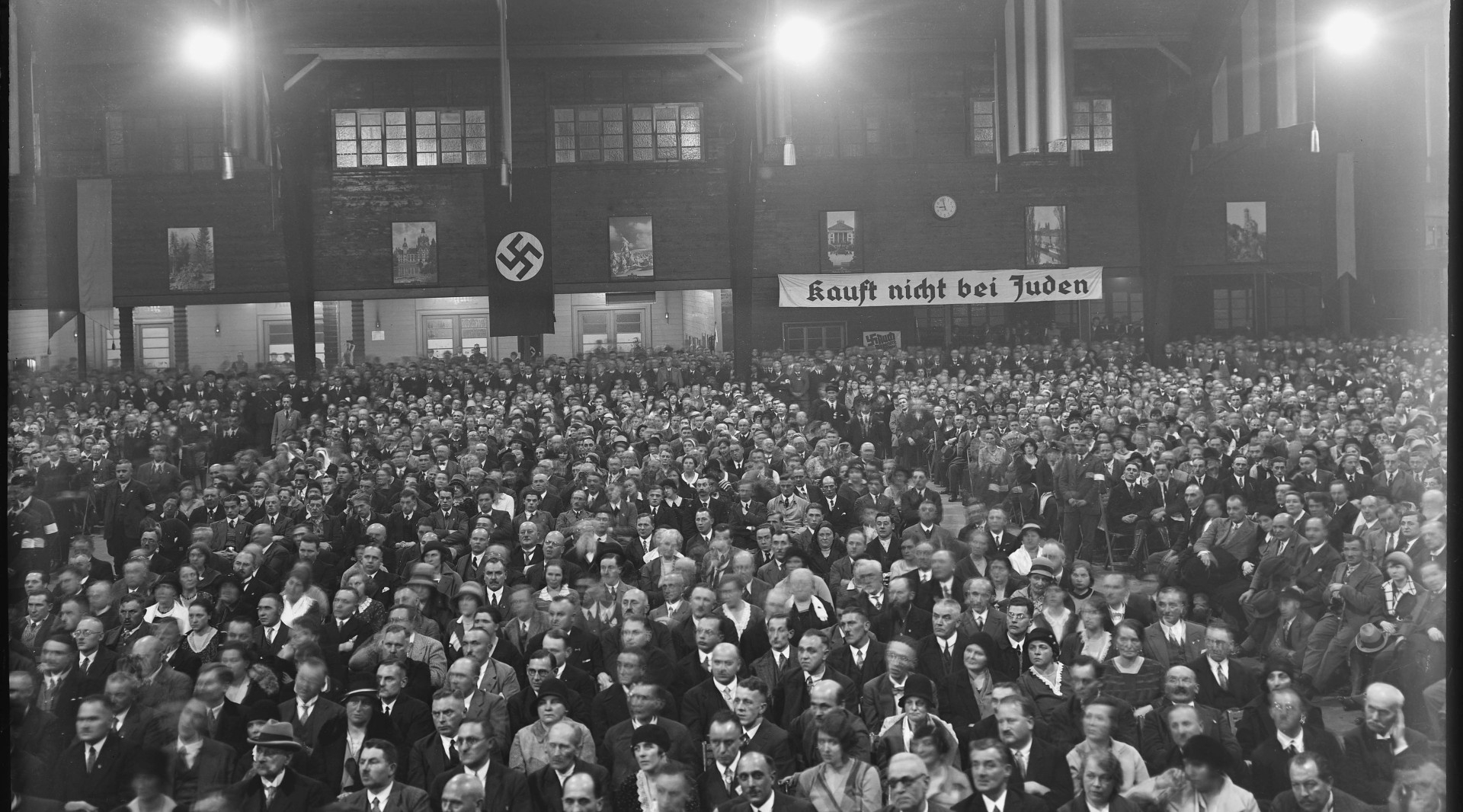 A Nazi Party political rally in Germany before the war, with a sign in the back reading "Don't buy from Jews." (National Archives and Records Administration)
Advertisement

Why didn’t the United States do more to help Europe’s Jews during the Holocaust?

This question haunts the history of the United States and the Holocaust, and lurks behind practically every storyline in the new film on the subject from Ken Burns, Lynn Novick and Sarah Botstein, to be aired for three consecutive nights on PBS beginning Sept. 18.

The question, of course, isn’t just about the Holocaust, but about the years before the war, when the Nazi vise tightened around the Jews of Germany and more than half of them sought to obtain visas to immigrate to the United States. The vast majority never made it in.

The simple answer to this question is that the American public was against granting Jews refuge in the United States, and in this area President Franklin D. Roosevelt’s administration hewed close to public opinion.

But, as the documentary, “The U.S. and the Holocaust,” demonstrates, there is more to it than that.

“There were multiple factors, and the film Burns made helps viewers understand that the answers are complicated,” said Daniel Greene, curator of an exhibit at the U.S. Holocaust Memorial Museum in Washington on America and the Holocaust.

“Between 1917 and 1924, immigration laws made it difficult to get in. And there were severe limits between 1929 and 1930, the first year of the Great Depression,” he said. “Antisemitism and xenophobia keep refugees out, but we are also in the depths of one of the worst economic depressions this country has ever faced.”

At a time when there were bread lines in the United States and one in four Americans was unemployed at the peak of the Great Depression in 1933, letting in Jewish refugees who would compete for jobs was out of the question, Greene observed.

Once the war began, some officials in the U.S. State Department and others stoked fears that Jewish refugees from Germany could be spies for the Nazis.

In 1940, Peter Bergson, a leader of the Irgun Jewish militia in Palestine who also was known as Hillel Kook, arrived in the United States from Palestine to lobby for a Jewish army that would both assist in the war effort and help create a Jewish homeland in Palestine.

“He was trying to lobby politicians and the U.S. government to create this army, saying there are American Jews and Hebrews in Palestine who wanted to fight and that they should be allowed to fight under one flag,” said Rebecca Erbelding, a historian and author. “He argued that he could get tens of thousands of Jews from all over the world who would fight and who had a stronger motivation to fight than the Allied nations did. He just needed the Allies to agree to the creation of this army.” 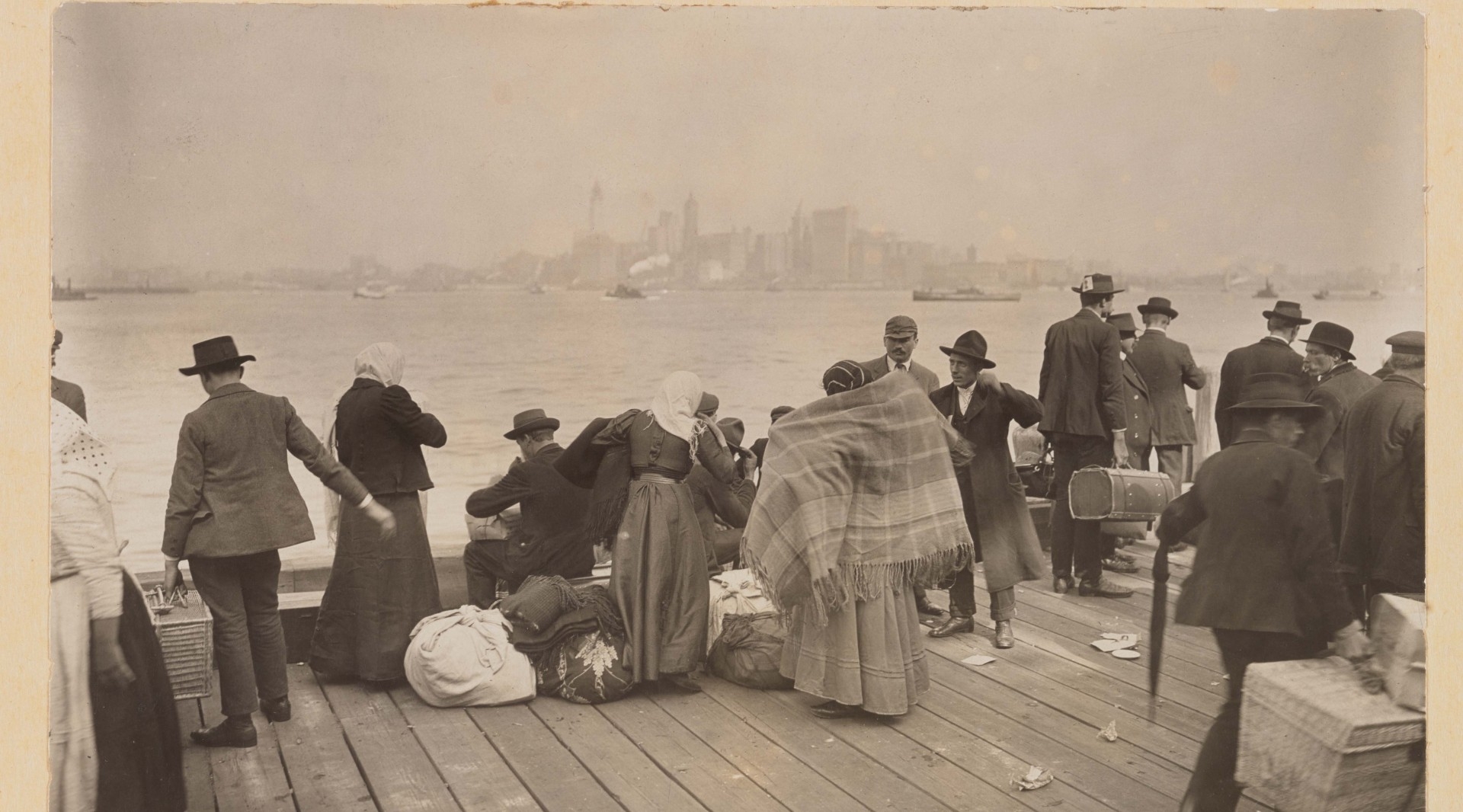 Immigrants waiting to be transferred to the U.S. mainland from Ellis Island, Oct. 30, 1912. Congress significantly tightened its immigration policies in 1924, making immigration more difficult for Jews fleeing Nazi Germany in the 1930s. (Library of Congress)

Bergson’s group circulated petitions, did radio interviews, ran newspaper ads, held dinners and staged We Will Never Die pageants across the country both to call for a Jewish army and for a stronger U.S. response to the Holocaust. Among the group’s supporters were artist Arthur Szyk, screen writer Ben Hecht, Interior Secretary Harold Ickes and Rep. Will Rogers, Jr.

In the end, however, there wasn’t enough support for the army’s creation.

“I think Middle East and British/American politics had a lot to do with their lack of clear success,” said Erbelding. Another factor in America’s shortcomings in helping European Jews was the inability of Americans — including Jews — to grasp the magnitude of the Nazi genocide. A Gallup poll in early January 1943 found that fewer than half of the respondents believed the Nazis could have killed 2 million Jews (by that time 4 million actually had been murdered).

With one notable exception — the resettlement of nearly 1,000 Jewish refugees in 1944 to a specially built refugee camp in Fort Ontario, New York, on condition they return home after the war — “Americans were very reluctant to let in refugees,” Greene noted.

This was true even after the war. A poll in December 1945 asked Americans if the U.S. should let in more refugees than the country had admitted prior to the war, and only 5 percent agreed. About 37 percent said the U.S. should allow in fewer. The United States actually had no formal refugee policies or protections until after World War II.

During the war’s later years, the official U.S. line was that the best way to help the Jews of Europe and liberate the concentration camps was to defeat the Nazis on the battlefield.

Why didn’t U.S. forces bomb the rail lines leading to Auschwitz, or even Auschwitz itself?

In the first years after the United States declared war, when the Nazis’ killing machine was at its most intense in 1942 and early 1943, U.S. aircraft based in Britain were not capable of reaching any of the killing centers by air, according to the documentary. By the time U.S. troops first reached mainland Europe, in southern Italy in September 1943, 75% of the Holocaust’s 6 million Jewish victims already had been killed.

The Allies did discuss bombing the rail lines to Auschwitz-Birkenau, but the War Department claimed that the lines would have been quickly and easily repaired, and that it was best to devote air resources to fighting the Nazis directly.

In addition, the documentary notes, bombing in World War II was hardly precise. One study showed that just one bomber out of five hit within five miles of its intended target. At least once, Allied bombs intended for a nearby forced labor factory actually hit Birkenau, several miles away, killing dozens. Although one prisoner later said he and his fellow prisoners were terrified by the bombing, others, including author Elie Wiesel, who was an inmate at Auschwitz, said they would have been willing to die by U.S. bombs if it would have ended Nazi exterminations.

“We were no longer afraid of death; at any rate, not of that death,” Wiesel later wrote. “Every bomb filled us with joy and gave us new confidence in life.”

There is no contemporaneous evidence that Roosevelt ever seriously considered bombing Auschwitz, according to the documentary. However, years later, John McCloy, a U.S. Assistant Secretary of War during World War II, claimed to have spoken with Roosevelt about the matter and that he flatly rejected it, saying: “I won’t have anything to do with it. We’ll be accused of participating in this horrible business.”

Historian Deborah Lipstadt, who now serves as U.S. Special Envoy to Monitor and Combat Antisemitism, said she believes the U.S. should have bombed Auschwitz — “not because it would have rescued a major portion of the 6 million, but as a statement, as a message to the Germans: ‘We know what you are doing. We cannot abide by what you are doing. This is our response to what you are doing.’ Yes, it could have done that.”

Freda Kirchwey, editor of The Nation magazine, might have agreed. In 1943, Kirchwey wrote, “In this country you and I and the President and the Congress and the State Department are accessories to the crime and share Hitler’s guilt. If we had behaved like humane and generous people instead of complacent, cowardly ones, the Jews lying today in the earth of Poland and Hitler’s other crowded grave yards would be alive and safe; and other millions yet to die would have found sanctuary. We had it in our power to rescue these doomed people and we did not lift a hand to do it. Or perhaps it would be fair to say that we lifted just one cautious hand encased in the tight fitting gloves of quotas and visas and affidavits and the thick layer of prejudice.”

This story was sponsored by and produced in collaboration with PBS, which will air “The U.S. and the Holocaust” on three consecutive nights beginning Sunday, September 18 at 8 P.M. Eastern. This article was produced by JTA's native content team.