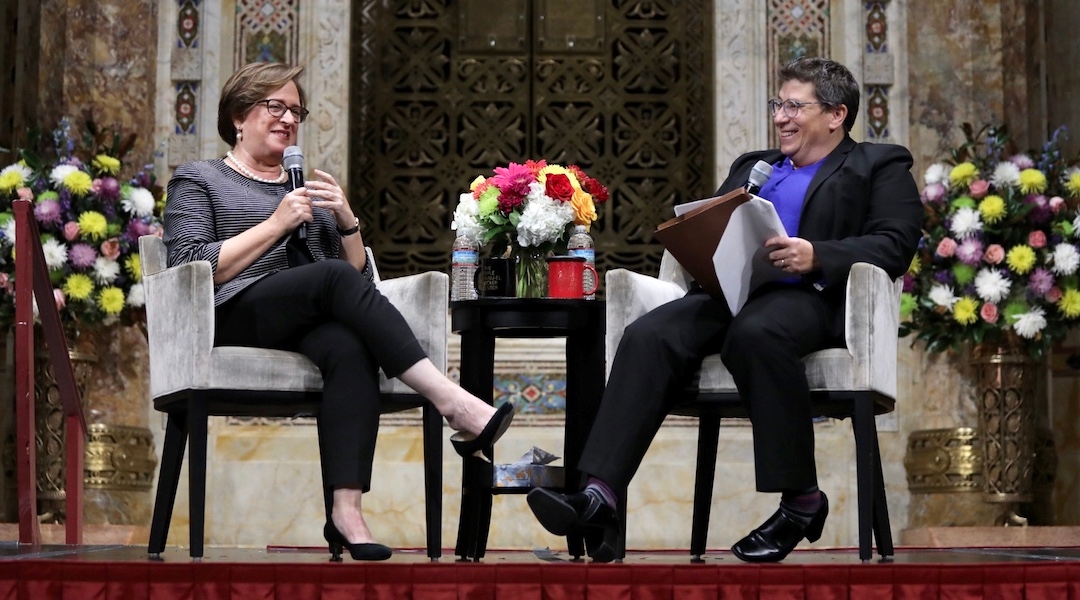 (New York Jewish Week) — Supreme Court Justice Elena Kagan said on Monday at a New York synagogue that courts lose their legitimacy when they stray into politics or judges are seen “imposing their own personal preferences.”

“Nobody elected me,” Kagan said in a public conversation at the Temple Emanu-El Streicker Center in Manhattan. “And the only reason people should accept what judges do is because they’re doing law, they’re doing something that they were put there to do. And so I think judges … undermine their legitimacy when they don’t act so much like courts and when they don’t do things that are recognizably law, and when they instead stray into places where it looks like they’re an extension of the political process, or where they’re imposing their own personal preferences.”

Her remarks, in response to a question by the moderator, Judge Alison J. Nathan of the United States Court of Appeals for the Second Circuit, were an expansion of a warning she gave in July, soon after the Supreme Court overturned the 50-year-old Roe v. Wade decision and nullified a women’s right to an abortion.

But if the audience at Emanu-El was expecting Kagan to criticize her own colleagues or question the legitimacy of the current court, they were disappointed: Kagan didn’t say, and Nathan didn’t ask, how her criteria applied to the current court.

Instead, asked which courts might have failed her test, she referred to justices who sought to block President Franklin D. Roosevelt’s New Deal reforms in the 1930s.

Kagan, the second Jewish woman to serve as an associate justice of the U.S. Supreme Court, described “three clear elements” that establish a court’s legitimacy:  humility, consistent methodologies and precedent.

“You don’t know everything and the years worth and generations worth of judges who have come before you have laid down legal principles step by step by step, piece by piece. They deserve respect,” she said. Respecting precedent is “a way to ensure that people see courts not as political actors, because if one judge dies or leaves a court, and another judge comes in, and all of a sudden the law changes on you, what does that say?”

The audience applauded this line, perhaps remembering the angry dissent on Dobbs signed by Kagan and the two other liberal justices on the nine-person court criticizing “the majority’s cavalier approach to overturning this Court’s precedents.”

Kagan and Nathan discussed the Dobbs decision only in reference to the leak of the draft opinion in May. Kagan called the leak “a horrible thing from the perspective of judicial decision-making” and “shocking for people within the institution that something like that could happen.”

In the 90-minute discussion, Kagan reminisced about growing up on the Upper West Side and becoming, in 1973, the first bat mitzvah at the Modern Orthodox Lincoln Square Synagogue.

“My theory of childhood was I should be able to do everything that my older brother did,” said Kagan, who recalled the “negotiations” she conducted with the synagogue’s young rabbi at the time, Shlomo Riskin. “We kind of came up with a half bat mitzvah,” she said. “It was on a Friday night, not Saturday morning, and I did a haftarah portion but not a Torah  portion.” And yet, she continued, “I really have an enormous amount of respect for the rabbi in the synagogue. They were sort of pioneering in this endeavor and and you know, I enjoyed my bat mitzvah very much.”

She also had high praise for her fellow Jewish justice, Stephen Breyer, who retired this year, and the late Justice Louis Brandeis, whose seat she holds.

She urged the audience to read Brandeis’ 1927  concurrence in Whitney v. California, a milestone defense of free speech and its importance in maintaining a democracy. “How is it that we go about creating this democracy that works and how our constitution aids in that endeavor, is in some ways, the project of Justice Brandeis’ life. And so for that reason, it’s sort of incredible to sit in his chair,” she said.