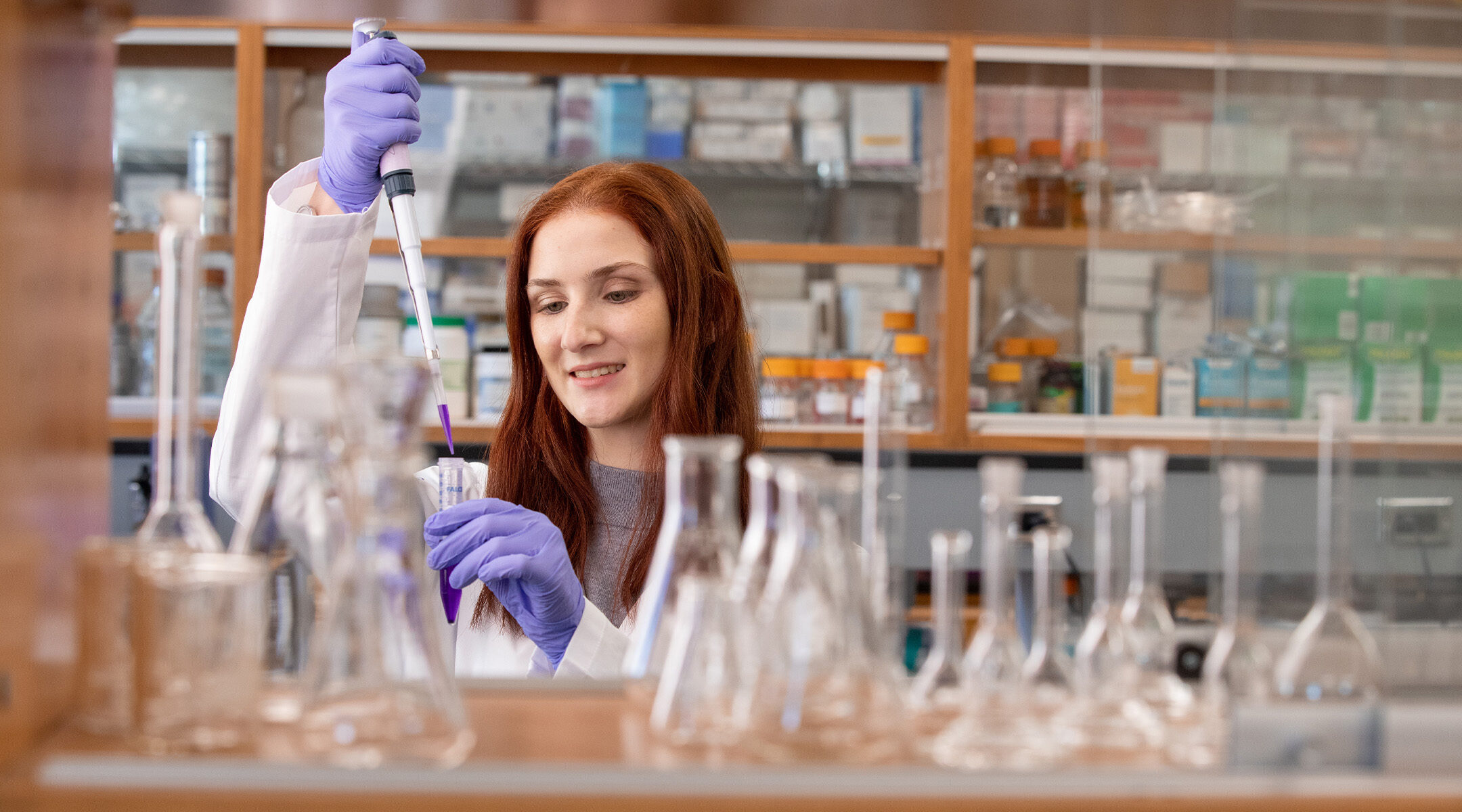 Pharmacy student Adina Kagan in the lab at the Touro College of Pharmacy. (William Taufic for Touro University)
Advertisement

When New York granted university status last February to what had been known until this year as Touro College, it signaled a milestone for what has become America’s largest Jewish-sponsored educational institution.

Touro University, now celebrating its 50th year, has grown far beyond its roots as a small college established by Dr. Bernard Lander in 1971 to give religious Jews a place to obtain a college degree without compromising their Jewish principles while more broadly serving humanity, with a special focus on those who have been historically underserved.

Today, Touro boasts 19,000 students across 36 schools spanning five U.S. states and four countries. Previously recognized as a university in California and Nevada before New York’s Board of Regents granted it university status, Touro offers everything from about half a dozen medical schools to a Jewish theological seminary and yeshiva constructed out of Jerusalem limestone.

Here are a few other things about this unique Jewish institution of higher learning that you might find surprising.

Touro is preparing to open a new medical school in Montana

Montanans long have lamented the lack of any medical schools in their state, which has the nation’s third-highest suicide rate, ninth-oldest population, and ranks in the bottom 10 when it comes to healthcare quality, according to data from the Centers for Disease Control, US Census Bureau and healthcare rankings sources. Eleven of the state’s 56 counties don’t have doctors, and nearly every county has a shortage of healthcare professionals, according to the Montana Department of Labor and Industry.

Touro has plans to step into this vacuum with the establishment of a College of Osteopathic Medicine in Great Falls, a city of some 60,000 people. The school plans to accept 125 students to start and grow quickly to 500 students, with preference given for in-state residents.

With studies showing that 39 percent of physicians practice in the state where they completed medical school, the new school is expected to help address Montana’s physician shortage. It would also further Touro’s commitment to educating a diverse student population: Montana has a high proportion of native American residents, and medical personnel at Tribal health facilities are in dire scarcity. 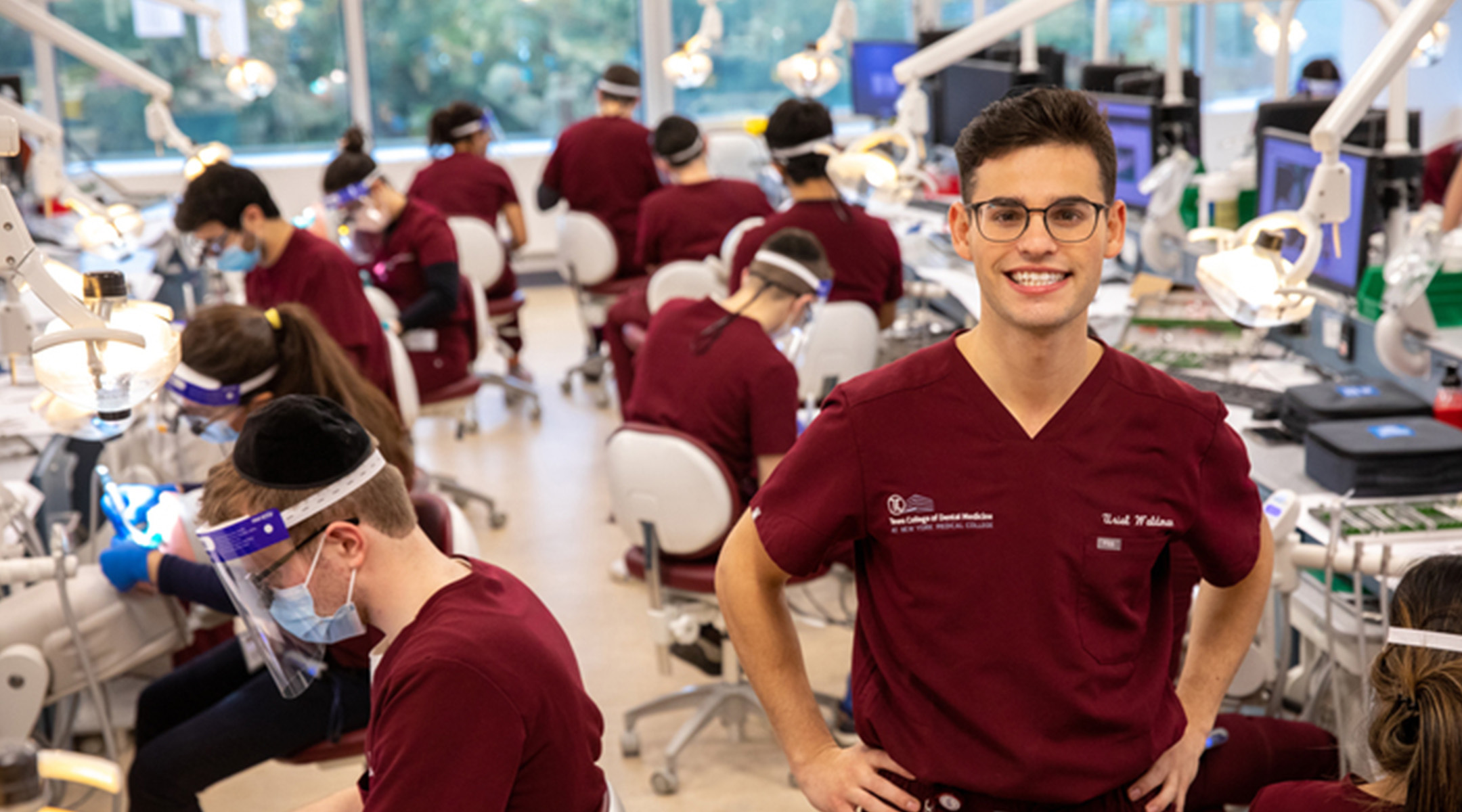 Uriel Waldman, a second-year year dental student, in the Simulation Lab at the Touro College of Dental Medicine. (William Taufic for Touro University)

Most of Touro’s students are not Jewish, but its programs reflect the university’s rich Jewish character

In New York, Touro long has been known as a place where Orthodox students could obtain a college degree without compromising their religious observance. But nationwide Touro actually has more non-Jewish students than Jews. It’s a sign of Touro’s dual mission of serving not just the Jewish community, but the wider world.

For example, at New York Medical College, religion is part and parcel of the study of medical ethics. Students learn about the role religion plays in medical decision-making, and classes recently took a field trip to the Museum of Jewish Heritage in Manhattan where they discussed, among other things, the ethics of having an anesthesiologist participate in Israel’s capture of Nazi mastermind Adolf Eichmann in Argentina in 1960.

The medical school is perhaps the only one in country in which students are required to take a course in the history of medicine that includes a segment on bioethics after the Holocaust. The school also has an endowed chair in that area of study.

Touro is relocating its central campus to Times Square in Manhattan

For many years, Touro’s headquarters were on 23rd Street in Manhattan, with larger campuses in Queens and Brooklyn. Soon, the school will have its central campus located in the heart of New York: Times Square.

Consolidated on eight floors of one of New York’s iconic skyscrapers at 3 Times Square, the 300,000 square feet of space, to be renamed the Cross River campus, will house Touro’s College of Pharmacy, the New York School of Career and Applied Studies, and graduate schools in business, education, Jewish studies, social work and technology. The space will be configured to accommodate not only classrooms but state-of-the-art science and technology labs, event spaces, offices, a library, student lounges and cafes.

The building, which was originally designed as the North American headquarters for Reuters Group, will have a separate entrance and lobby for the university. More than 2,000 staff and students are expected to work and attend class there daily. The university expects to move into the new space next January.

Touro’s other locations outside of New York State include campuses in Nevada, Illinois, New Mexico and California, and overseas in Jerusalem, Berlin and Moscow.

In announcing its new Times Square campus under a 30-year lease, the university reaffirmed both its commitment to New York and the importance of in-person learning after having to transition during the pandemic to online and hybrid education. Touro actually introduced its first online doctoral program in 1998, making it the first-ever regionally accredited online doctoral program open to students worldwide. That program was particularly attractive to members of the U.S. armed services, who sought to advance their education while stationed abroad. 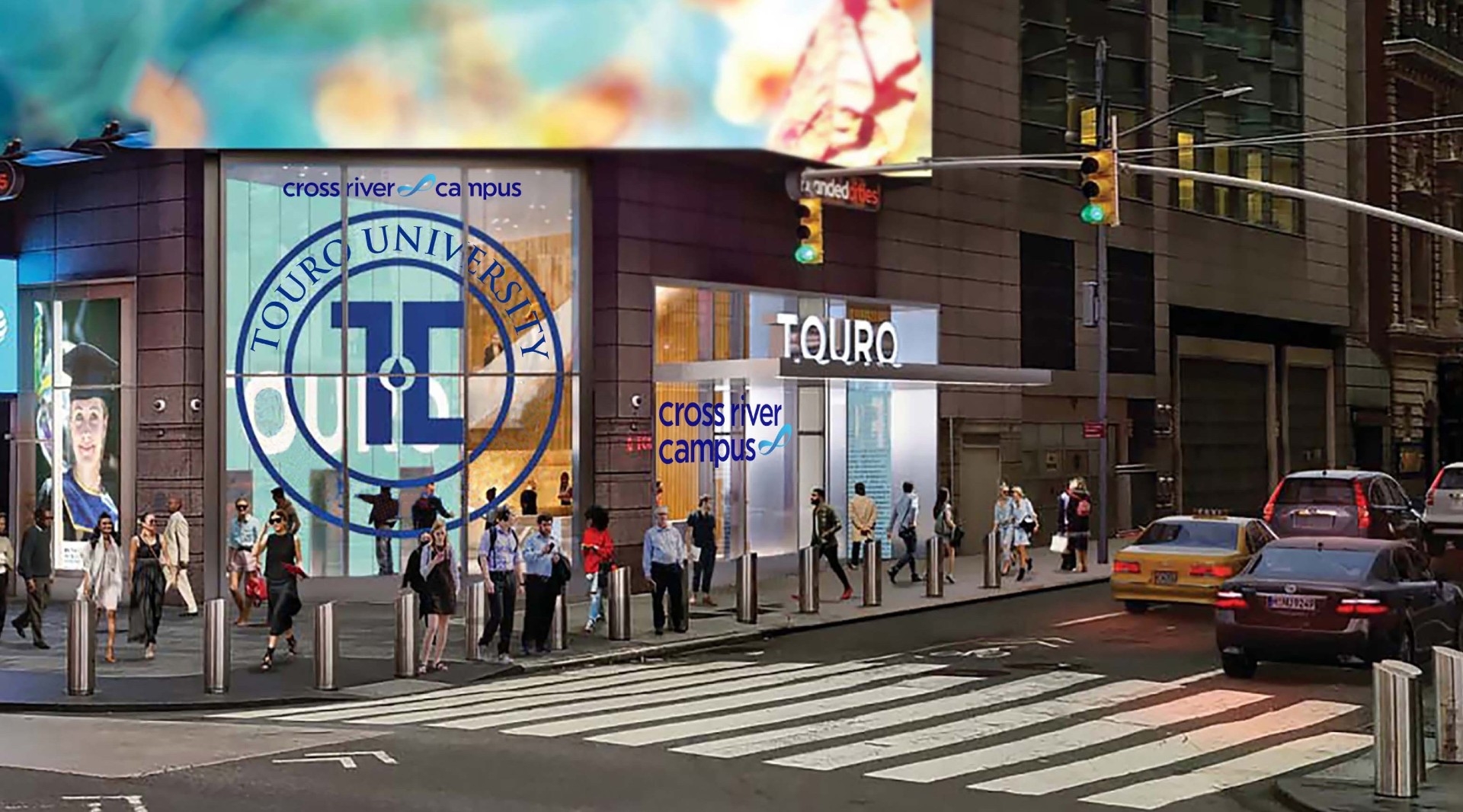 An architectural rendering of the future home of Touro University at Times Square, in New York. (Touro)

Touro has a special focus on the underserved

Touro’s dual mission to strengthen Jewish heritage while serving humanity generally, with a special focus on the historically underserved, is the idea behind not just the opening of the medical school in Montana, but also campuses in New York that serve largely Hispanic and African-American populations.

In the areas around its osteopathic medical schools near Las Vegas and San Francisco, Touro sends mobile medical units to provide free health screenings to the elderly, homeless and other underserved populations.

For decades, Touro was synonymous with the man who founded the university and turned it from a dream into an international institution: Bernard Lander, who designed Touro in a manner he hoped would enable observant Jews to go to college without enduring the secularizing influences of a large university campus. Students at Touro could schedule their classes around not just their religious obligations, but days spent in yeshiva. Many of Touro’s students still combine their academic studies (in the evenings) with yeshiva learning (during the daytime). A men’s college in Boro Park, Brooklyn, for example, caters largely to Hasidic students.

Shortly before Lander’s death in 2010 at the age of 94, Touro brought in Dr. Alan Kadish as senior provost and COO. A prominent cardiologist, teacher and administrator originally from New York who had taught at University of Michigan and had a 19-year tenure at Northwestern University, Kadish soon succeeded Lander as president and set to work orchestrating a significant strategic expansion while upholding Touro’s special Jewish character.

“Our decisions on where and when to expand are strategic. We’re focusing on where there’s real synergy,” Kadish said. “In the last two years, we’ve launched major projects and programs in incredibly short periods of time,” he added. “We’re able to launch a new medical school or physician’s assistant program, for example, because we have the expertise and experience, and because people at Touro are always ready to join forces to offer the insight and input needed to make things happen. Our staff, faculty and administration are extremely dedicated to the mission.”