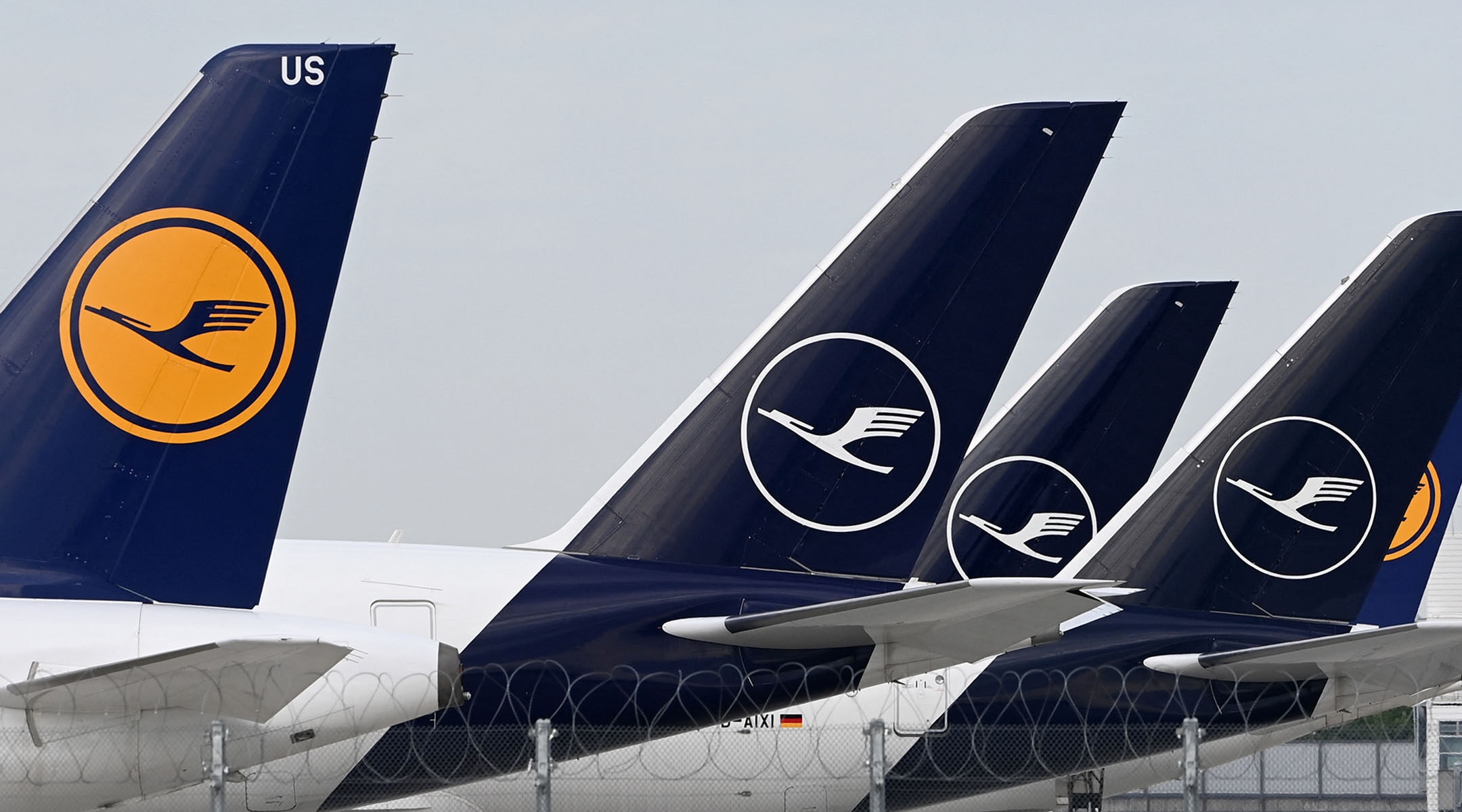 Lufthansa airplanes are parked at the Franz-Josef-Strauss airport in Munich during a strike of the ground staff employees, July 27, 2022. (Christof Stache/AFP via Getty Images)
Advertisement

(JTA) — Germany’s flagship airline has joined with a major American Jewish advocacy organization to combat global antisemitism, four months after igniting a scandal when its agents barred dozens of Jews from boarding a plane in Frankfurt.

Under the terms of the partnership announced last week, American Jewish Committee staffers will train employees of the Lufthansa Group to identify and respond to antisemitism. The airline is also joining dozens of countries, states and companies that have adopted a specific definition of antisemitism to guide their own activities.

The partnership is the latest commitment by Lufthansa following the negative headlines it earned in May after 100 Orthodox Jewish passengers flying from New York to Budapest were barred from boarding a connecting flight. Airline staffers said the decision had been made because because some of them had not worn masks and had gathered in the aisles, going against flight regulations.

But antisemitism watchdogs including the AJC, which has an office in Berlin, strongly criticized the airline for permitting the collective punishment of Jewish passengers at the time, many of whom did not appear to have engaged in the objectionable behavior.

Shortly afterward, Lufthansa CEO Jens Ritter informed the Conference of Presidents of Major American Jewish Organizations that Lufthansa had established an internal task force to investigate the case. The firm, which earlier had apologized to the passengers involved, blamed miscommunication for the “categorically inappropriate” decision to bar them all — and not just those who were non-compliant — from boarding.

In July, Ritter said the company would appoint a senior management position “for the prevention of discrimination and antisemitism.” Lufthansa has since endorsed the International Holocaust Remembrance Alliance definition of antisemitism, known as IHRA, which also has been adopted by the U.S. Department of State, the German Bundestag and multiple other governments as their official referee for what constitutes antisemitism. (The definition has drawn criticism for its characterization of some forms of Israel criticism as antisemitic.)

Holly Huffnagle, AJC’s U.S. director of combatting antisemitism, said in a joint statement that she was grateful for Lufthansa’s commitment to fighting workplace bias of all kinds. “As global antisemitism rises, the private sector increasingly has a role to play,” she said.

This week’s announcement followed meetings in Washington, D.C., between a top Lufthansa board member, Christina Foerster, and a host of heavyweights, including Deborah Lipstadt, U.S special envoy to monitor and combat antisemitism; Felix Klein, Germany’s commissioner for Jewish life and the fight against antisemitism; Emily Haber, German ambassador to the United States; and Michael Herzog, Israel’s ambassador to the United States.