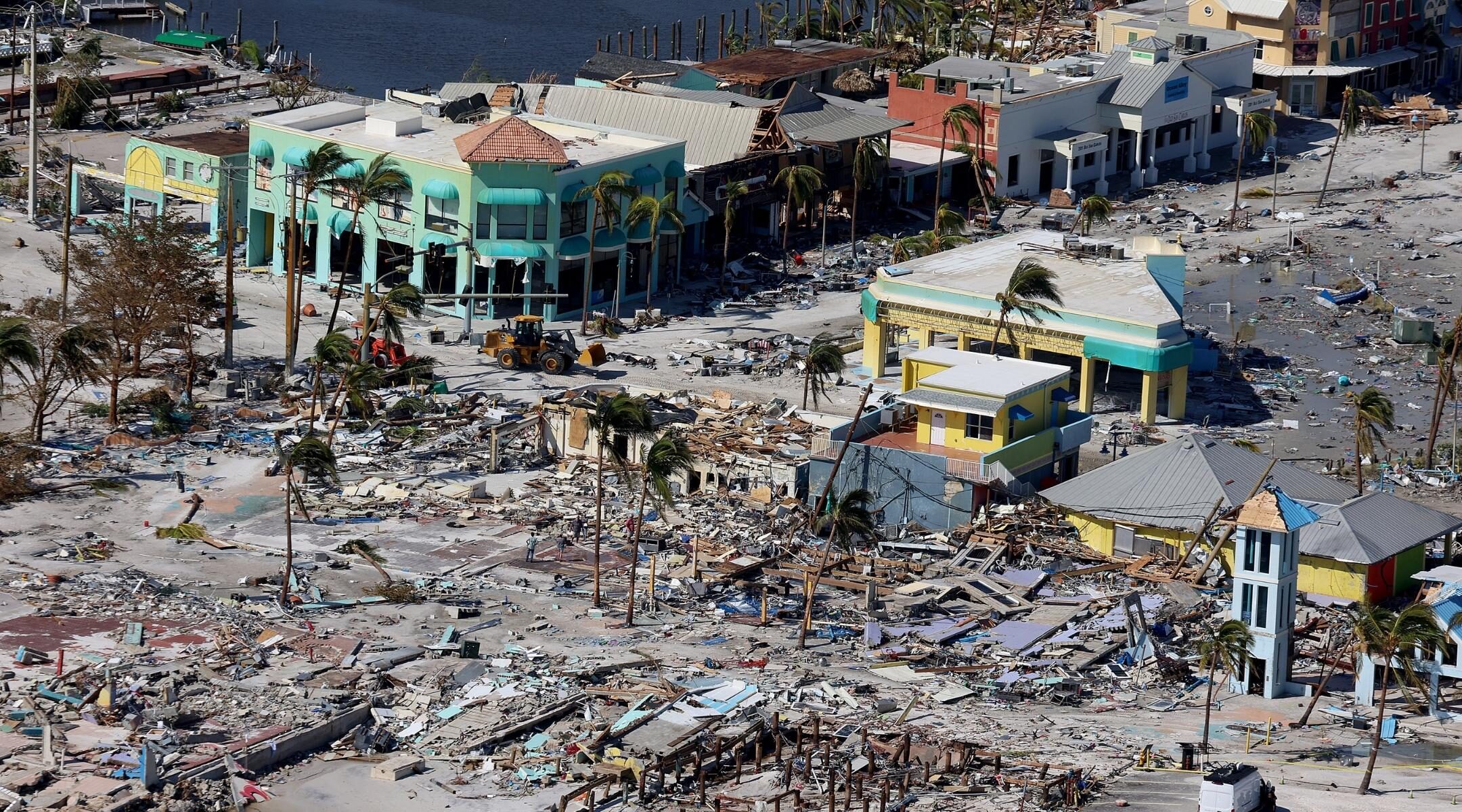 Fort Myers Beach, on the western coast of Florida, was one of areas hit hardest when Hurricane Ian made landfall Wednesday. (Getty)
Advertisement

(JTA) — On Monday, after finishing Rosh Hashanah services, the congregants of Bat Yam Temple of the Islands headed to the beach to perform the Jewish ritual of tashlich, letting symbols of their sins be swept away by the warm gulf water that surrounds Sanibel Island.

By the following day, almost every single person there had headed off the island, fearing the wrath of those same waters as Hurricane Ian bore down on their swath of Florida’s coast.

Florida Gov. Ron DeSantis said Sanibel Island experienced “biblical” destruction when the storm hit on Wednesday, bringing with it a predicted 12 to 18-foot surge and punishing winds. The bridge linking the island with the mainland was damaged so severely that no one can access the island — striking fear into Bat Yam members about what has happened to the two couples from the synagogue who stayed despite a county-wide evacuation order.

“Nobody has heard from anybody on the island since a little after 3 p.m. Eastern Time yesterday,” Janice Block Chaddock told the Jewish Telegraphic Agency. “I’m happy to be alive, happy that my husband and my mom are alive and I’m on pins and needles about other friends on Sanibel.”

While the island appears to be among the places hardest hit by Ian, the storm cut a path of devastation up and down Florida’s west coast and across the mainland. About 2.5 million people are without power in Florida, where officials say there could be many casualties from the storm and that rebuilding could take years.

Florida’s most substantial Jewish population centers, in the south near Miami, experienced only heavy rains and wind. But the cities of Sarasota, Orlando and Naples, all hard hit by Ian, are home to at least 70,000 Jews, according to a 2020 analysis of American Jewish population data, and other cities have smaller Jewish populations.

Rabbi Yitzchok Minkowicz of the Chabad of Southwest Florida in Fort Myers rode out the storm at home, not by choice but because the evacuation order had come during Rosh Hashanah, when Orthodox Jews refrain from using technology.

“We couldn’t leave because we only found out after yontif and it was too late to leave,” Minkowicz said, using the Yiddish term for a Jewish holiday.

Fort Myers suffered severe flooding, but by Thursday morning, the storm surge had rescinded back into the Gulf of Mexico, and Minkowicz had mobilized, opening a temporary shelter at the Chabad House in Fort Myers, launching a fundraiser and providing video updates on the community’s relief efforts. By midnight Wednesday night, three ambulances from Hatzoloh, the Jewish emergency service, had arrived, and volunteers from Miami and Boca Raton are now working on logistics such as setting up a generator and Wi-Fi at the temporary shelter.

On Thursday, Minkowicz’s group will host a barbecue dinner for people who are out of power or low on supplies, and will also deliver 200 Shabbat dinners to members of the community.

Relief efforts from beyond Florida are already underway. The Jewish Federations of North America is opening an emergency collection for donations and preparing to provide emergency grants to affected communities.

“While we’re still assessing the damage, it’s clear that many communities in Ian’s path will have significant needs,” Julie Platt, the group’s chair, told JTA in a statement.

A resort town known for its abundance of seashells and brightly colored buildings and whimsical street, house, and restaurant names, like The Blue Giraffe and the Lazy Flamingo, Sanibel has suffered catastrophic damage from hurricanes before. In 2004, Hurricane Charley divided Sanibel’s northern neighbor, Captiva Island, into two parts, permanently changing the geography of the area. 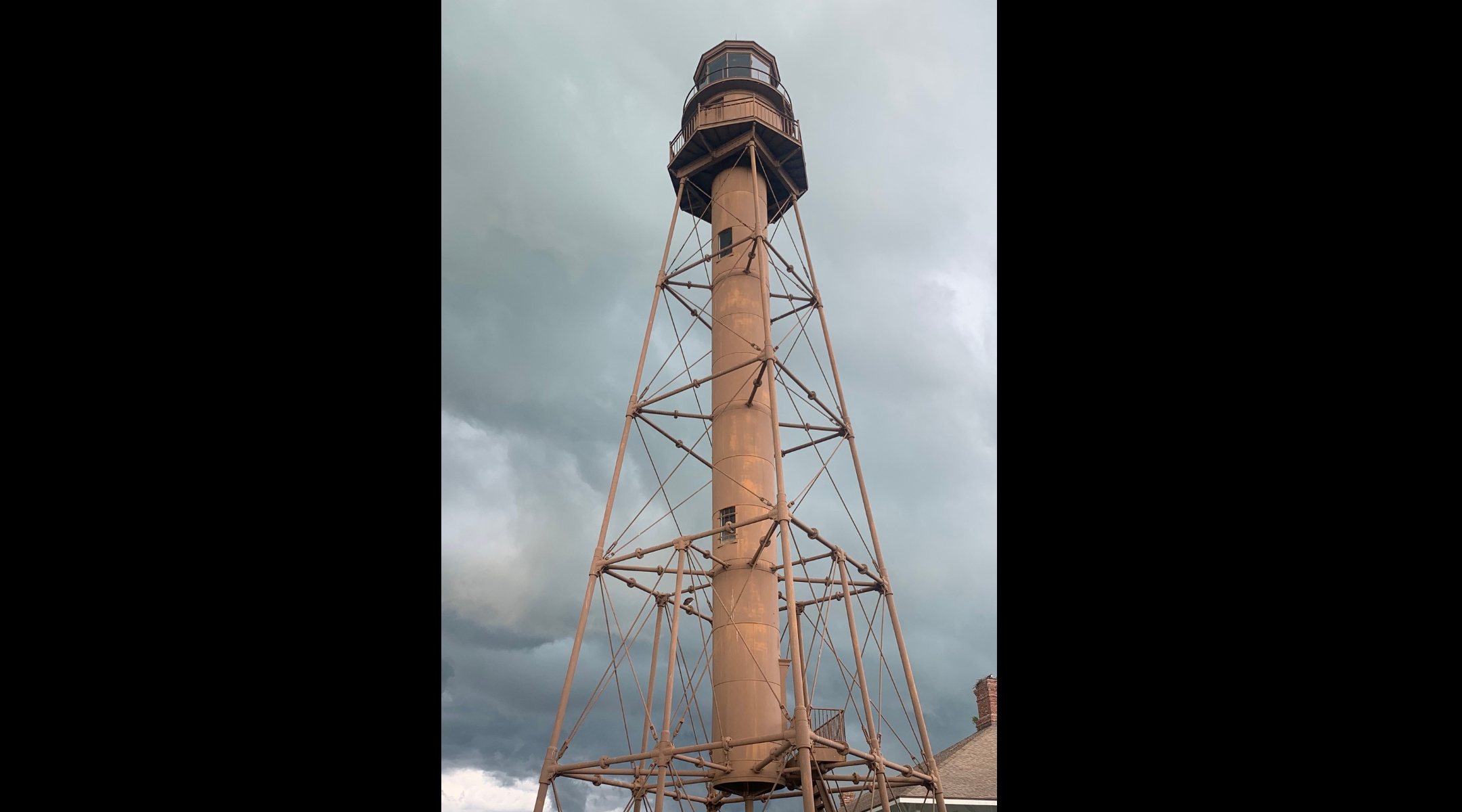 The Sanibel Lighthouse is a 138-year-old iron structure listed in the National Registry of Historic Places that has so far survived the destruction from Hurricane Ian. (Photo courtesy of Jackie Hajdenberg)

Block Chaddock, who became a full-time Sanibel resident in 2018 but spent decades visiting her grandparents and mother on the island, remembers the devastation after Hurricane Charley. So many trees were torn down that the islands looked “barren and different,” she said.

With what little she does know so far, Block Chaddock has a feeling that the devastation from Hurricane Ian will be much worse.

Apart from the collapse of the causeway, which hasn’t happened before, street cam footage from the beginning of the storm Wednesday shows one of Sanibel’s main streets, Periwinkle Way, flooding several feet within one hour.

Bat Yam Temple of the Islands, which only meets for Shabbat services from November to May, is housed in a local church just off of Periwinkle Way. Congregants have no idea if the structure where Rosh Hashanah services took place on Monday is still standing or if their prized Czech Torah rescued from the Holocaust has survived.

Congregants don’t expect access by Yom Kippur, the Jewish holiday that begins Tuesday night at sundown. So Rabbi Nicole Luna of Temple Beth El in Fort Myers has invited the Bat Yam community to join her congregation for services.

For now, residents of southwest Florida are in shock, hoping the communication systems will be back online soon so they can check in with their friends, neighbors, and family members.

Block Chaddock, who chairs Bat Yam’s governance committee and is currently in France with her husband for a work obligation, could account for the locations of several members of Bat Yam’s leadership, many of whom are sheltering in nearby Fort Myers or Naples. But she wishes more of her neighbors had chosen to evacuate.

“All I can think about is their health and safety right now,” she said.