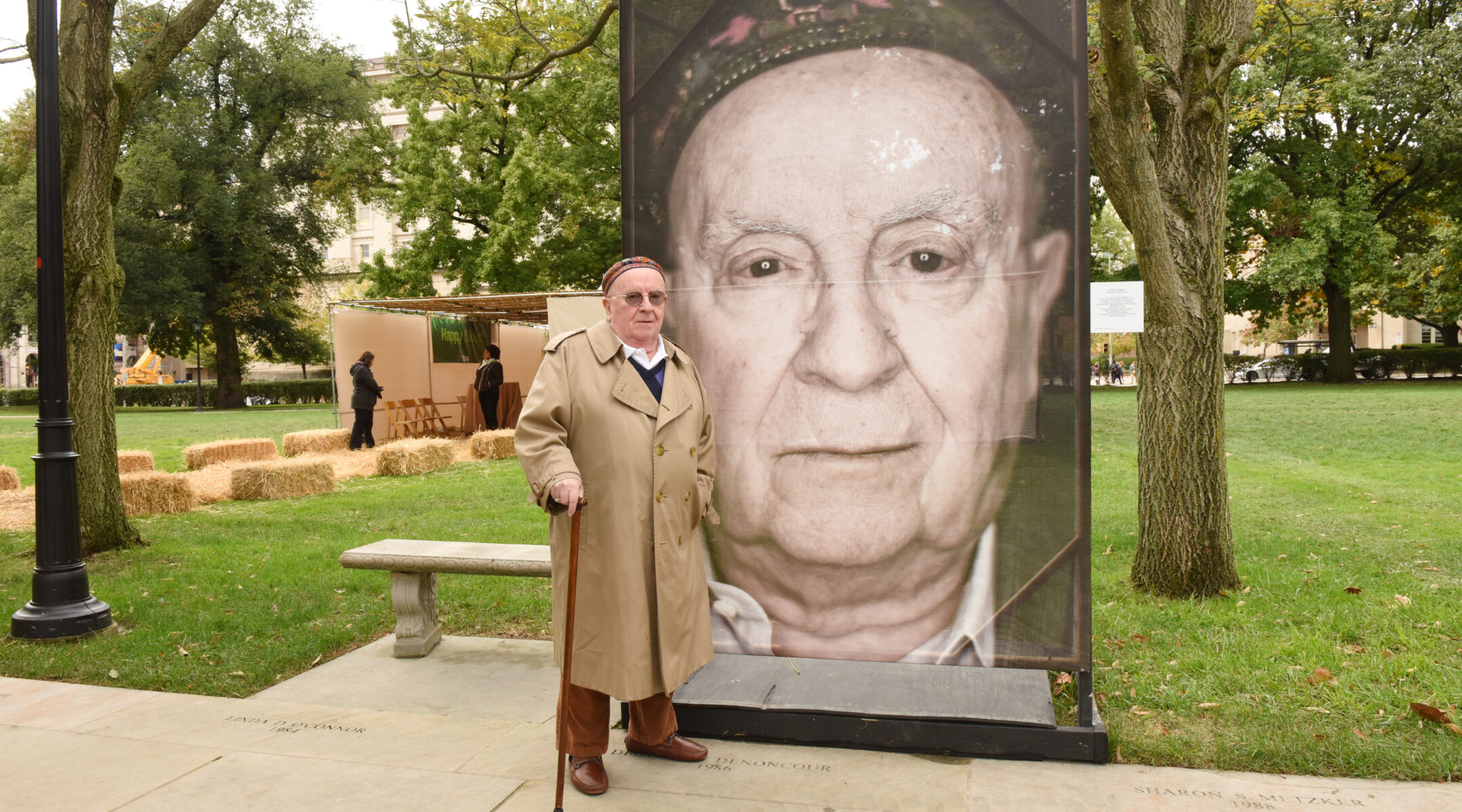 Judah Samet stands next to his portrait, part of Luigi Toscano’s “Lest We Forget” project at the University of Pittsburgh in 2019. (Photo by Hector Corante, courtesy of Holocaust Center of Pittsburgh)
Advertisement

(JTA) — It is rare that one can say attending a funeral was an uplifting experience. Yet the funeral Thursday for Judah Samet — teacher of Torah at his Tree of Life synagogue, possessor of a unique and vigorous voice and sense of humor, veteran of the paratroop division of the Israeli army, lover of Golden Grahams, generous tipper and possessor of what he termed a “Bergen-Belsen stomach” — was exactly that, because remembering Judah can bring only positive feelings.

Samet, a longtime pillar of Pittsburgh’s Jewish community who spoke frequently about his experience during the Holocaust, vaulted onto the national stage on Oct. 27, 2018, when a gunman entered his synagogue and murdered 11 Jews during Shabbat services. Samet, whom I and others in the community knew as Judah, had arrived a few minutes late and was warned away, remaining in his car outside the synagogue as gunshots sounded. The following February, Judah was a guest of President Donald Trump during the State of the Union address.

“I’m going to say a Jewish blessing that you say only when you meet a head of state,” he told the Pittsburgh Tribune-Review at the time. “I have permission to do it.”

The State of the Union was a far cry from Judah’s childhood in Hungary, where he was born in February 1938. As a young child, he was forced by the Nazis from his home and shipped with his family first to a labor camp in Austria and then to the Bergen-Belsen concentration camp. His father died of typhus three days after liberation, but the rest of the family made their way to prestate Israel. He moved to Pittsburgh in the 1950s, ultimately joining his father-in-law’s jewelry business there and remaining a committed community member until his death at 84 on Tuesday, the second day of Rosh Hashanah.

At his funeral, Judah’s son-in-law, the playwright David Winitsky, spoke of a time they went out to the casual restaurant Eat N’Park together and his father in law praised the service the waitress gave the table. Yet, he wasn’t content just with complimenting her — he told her that he would let her manager know what a good job she was doing. He said to his son-in-law that it is important to make someone else’s day better whenever you can.

This simple message seems uncomplicated enough, but then one thinks about the occasions when Judah was on his own — the years he was in a labor camp and in Bergen Belsen, in the Israeli army, and the terrifying moments he spent in his car parked outside the door of the Tree of Life, the synagogue he attended for over 40 years while a police detective and the man who shot 11 Jews inside the building traded gunfire.

Judah’s drive to inspire others to better their lives and the lives of those around him was most evident in his tireless efforts to educate young people in Pittsburgh and beyond about the Holocaust. After not speaking about his experience for many years, he began sharing just over a decade ago, and he ultimately delivered hundreds of talks that reached the ears of tens of thousands of people, according to Lauren Bairnsfeather, executive director of the Holocaust Center of Pittsburgh.

Judah knew his words had an impact because of the countless letters he received from students over the years about what his story meant to them.

Judah’s sister Miriam Cohen, born in Israel when their mother remarried after the war,  recounted at the funeral that one time at the Pittsburgh community Yom Hahoah commemoration, a family arrived that looked out of place. At the end of the service, the teenaged daughter came up to Judah and gave him a big hug. She said she wanted her parents to meet him after he had spoken at her school. 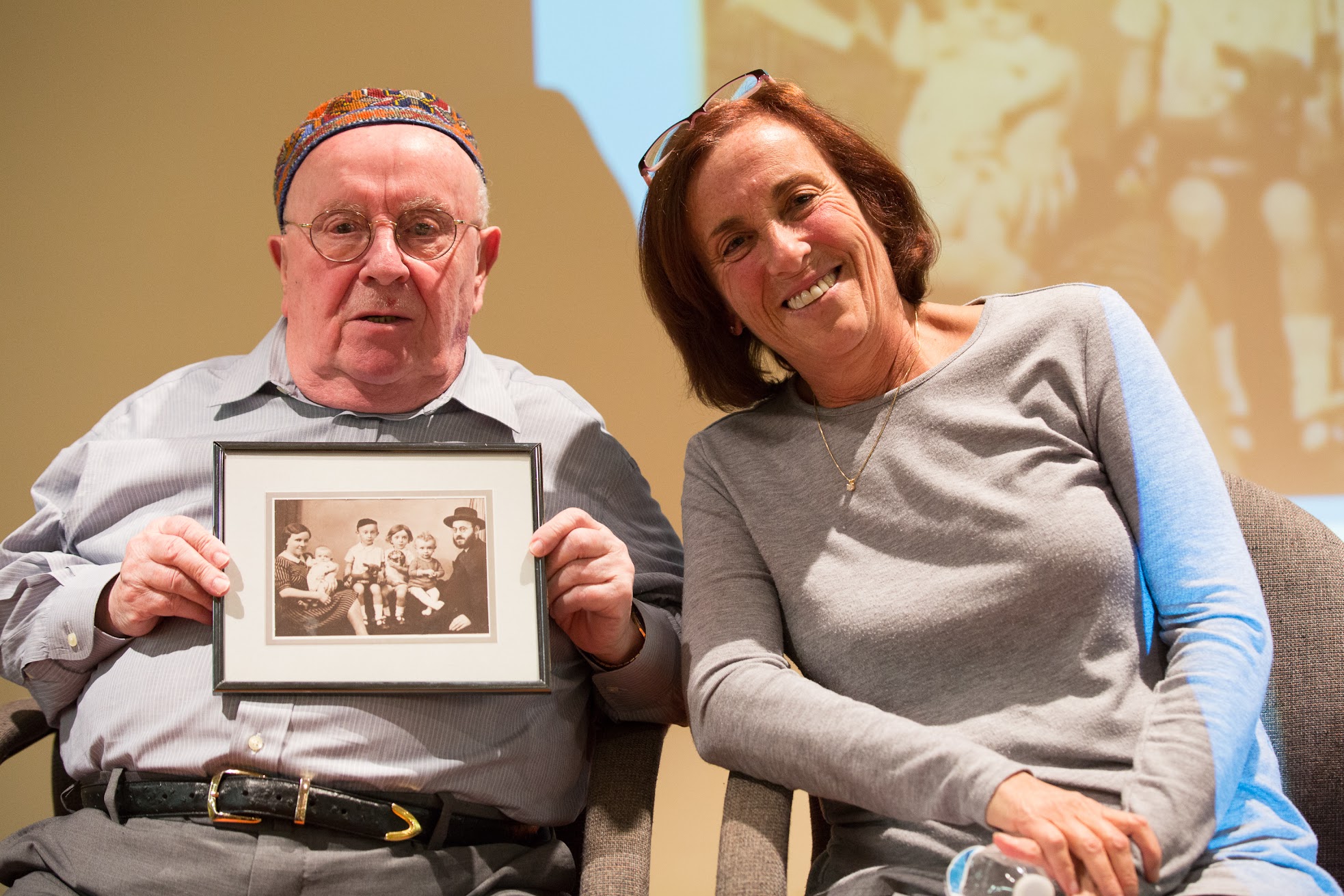 Judah Samet with his sister, Miriam Cohen, during a 2018 talk they gave about their family history. He is holding a picture of his family before the Holocaust. (Melanie Wieland, courtesy of Holocaust Center of Pittsburgh)

Another eulogist talked about what Judah said to students, that he knew teen girls did not like their mothers but that their mothers were the only ones who would do anything and go through anything to care for them. As he said about his mother in a 2012 Holocaust Center interview, “She was a tower of strength….Her mind was dedicated 24 hours a day to saving her family.” After hearing how his own mother told him and his siblings to eat lice to sustain themselves in the camps and how she foraged food for them, many students did what he said and went home to hug their mothers.

It was Judah’s 81st birthday when the president of the United States led both houses of Congress in singing to him at the State of the Union address, watched by millions on national television. He was a guest of the first lady, sitting in her box; who knows how many Americans were educated about the Holocaust and antisemitism just by hearing a small snippet of the story of Judah’s life.

Elizabeth Samet said that when her father received his stomach cancer diagnosis in June he told her that if this was it, the end of his life, that was OK with him. That ability to accept what he had and not try to change what might not be possible to change, though he had defied the odds so many times before, is characteristic of great strength.

My personal favorite memory of Judah is from July 4, 2019, at the morning minyan at Beth Shalom, where Tree of Life and New Light, the congregation my husband leads, join together. After we prayed, Judah proudly showed all the attendees the photos he had received from the White House photographer of himself with the first lady and proclaimed what a wonderful country this is to live in. Though he had experienced America at its worst, he remembered it as its best — as a place that welcomes people like him, survivors and immigrants who can improve their own lives and so many others.

Beth Kissileff
is a Pittsburgh-based writer. She is the co-editor of the anthology "Bound in the Bond of Life: Pittsburgh Writers Reflect on the Tree of Life Tragedy" and author of the novel "Questioning Return."
The views and opinions expressed in this article are those of the author and do not necessarily reflect the views of JTA or its parent company, 70 Faces Media.