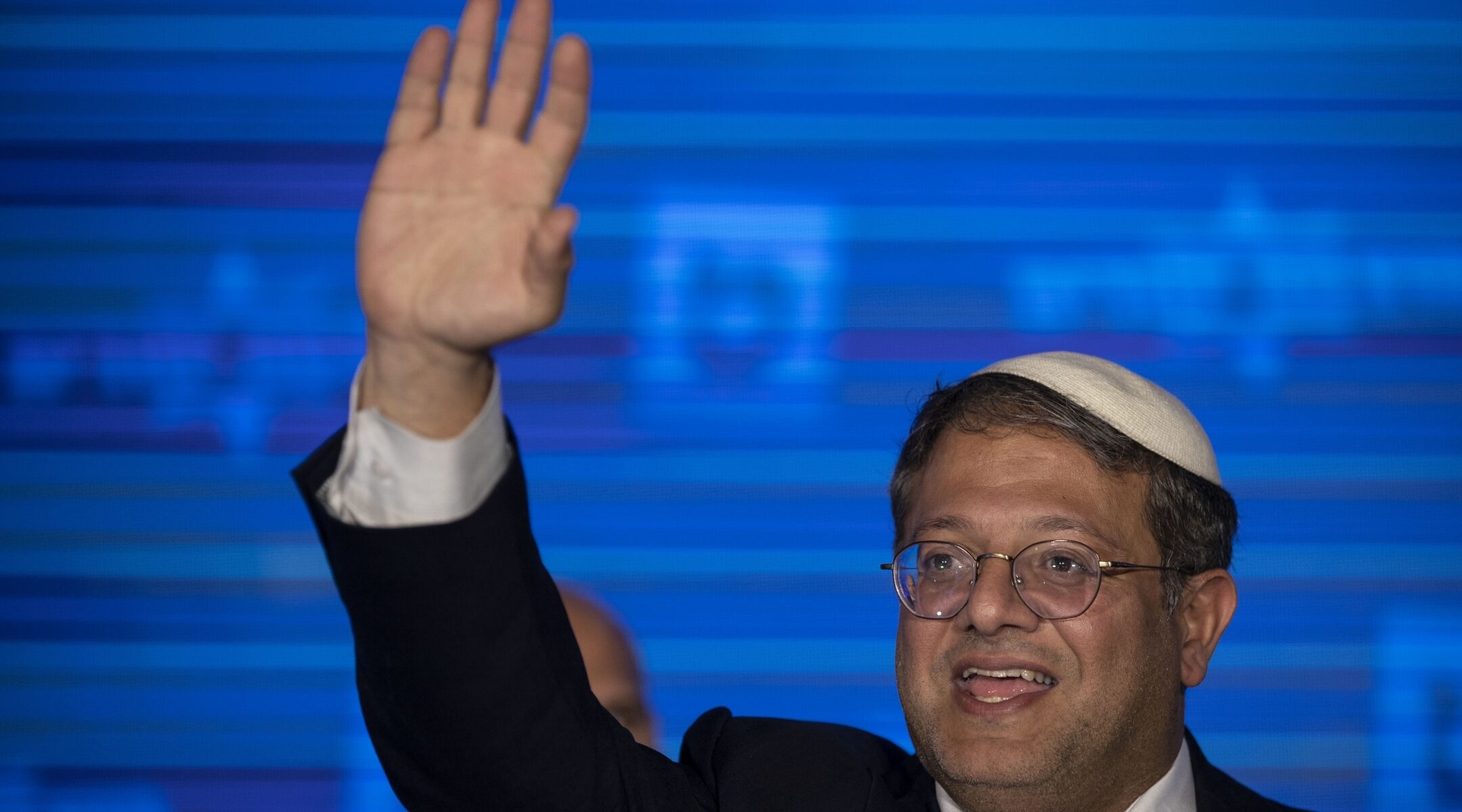 WASHINGTON (JTA) — Few of the American Jewish groups who would not speak out about the prospect of extremists in government before Israel’s elections have done so the day after, even though Itamar Ben-Gvir, a far-right provocateur, seems headed for a position of power.

“As Israel determines the formation of its new government, it is clear that the Knesset — like the U.S. Congress — will include leaders of a wide range of different political, ideological, economic, racial, and religious identities and perspectives,” AIPAC said in a statement.

Israel’s former prime minister, Benjamin Netanyahu, having secured a majority bloc of 62 to 65 seats, appeared headed back to power. The Religious Zionist Party, a bloc of three parties including Ben Gvir’s Otzma Yehudit, looks set to win 14 seats, making it an attractive partner as Netanyahu seeks to form a governing coalition.

Ben-Gvir has been charged with crimes more than 50 times and convicted in eight cases, including once for providing support to a terrorist organization. He is a protege of Meir Kahane, the American-Israeli Jewish extremist-turned-politician who advocated for openly racist policies. This election, he campaigned on a platform that included loosening open-fire rules to include stone-throwers as legitimate targets — and then traveled to a clash and pulled out his pistol.

(Ben-Gvir campaigned saying he has moderated some of his views.)

The Biden administration is unlikely to deal with Ben-Gvir or anyone from his party should they secure a Cabinet position or otherwise visit the United States, said Daniel Shapiro, a former U.S. ambassador to Israel who is now a fellow at the Atlantic Council.

“I doubt that the administration will work with anyone who advocates racist and bigoted policies, gauges and engages in anti-Arab incitement,” Shapiro said in an interview. “Biden’s strong defense of global democratic values will not make that possible. So if he’s a minister whose portfolio involves close coordination with us, that coordination will have to be conducted via others.”

An exception among the groups that declined to comment before the election was the American Jewish Committee. Its statement Wednesday did not name Ben-Gvir but made clear the organization had concerns about his participation in government.

“For AJC, and for many Jews in America, Israel, and around the world, past statements of some potential members of the governing coalition raise serious concerns about issues we prioritize: pluralism, inclusion, and increased opportunities for peace and normalization,” it said.

The large number of Jewish groups, mostly liberal, that spoke out before the election against bringing in Ben-Gvir were heartbroken in the wake of his showing.

A statement from leaders of the Reform Jewish movement named Ben-Gvir and Bezalel Smotrich, who heads the Religious Zionist Party. (The two parties ran as a single ticket with a third anti-LGBTQ Party, Noam.)

“Including Ben Gvir and Smotrich in the government will likely jeopardize Israel’s democracy and will force the country to reckon with its place on the world stage,” the Reform movement’s statement said. “It will almost certainly lead to challenging moments in U.S.-Israel relations and will be painful for Jews worldwide who will not see the Israel they love and believe in reflected in these leaders, nor in the policies they pursue.”

Also speaking out was A Wider Bridge, a group that promotes Israel within the LGBTQ community and advocates for LGBTQ rights in Israel. The former mission just became harder, the group said in a statement.

“LGBTQphobia has been their calling card,” the group said of the Religious Zionist Party, “but we are also concerned about policies they would implement that would harm women, Arabs and Jews who don’t pray as they do. … The new government could be the most extreme and dangerous for many groups, including our friends and colleagues in the LGBTQ community.”

Jeremy Ben-Ami, the president of the liberal Jewish Middle East lobby, J Street, said the elevation of the extremists  “should force a moment of serious reckoning for all Americans who care about the nature of the US-Israel relationship and a just, equal and democratic future for both Israelis and Palestinians.”

The Zionist Organization of America, which has allies in the settler movement and on the U.S. and Israeli far right, was an outlier among the U.S. Jewish groups, welcoming the result and insisting that Ben-Gvir’s party was not “extreme.”

Shapiro said Netanyahu understands the risk of elevating Ben-Gvir and his ilk and could consider a coalition that brings in parties from the center and secure enough of a majority to keep out Ben-Gvir and Smotrich. Netanyahu and President Joe Biden have a good relationship, and it is not in Israel’s interests to undercut that.

“A coalition that does not include [Ben-Gvir] will help avoid those disruptions, which is something that now he should probably take into account,” he said of Netanyahu.

The major Jewish groups now hesitant to speak out may be planning to wait Netanyahu out in hopes that he cobbles together a coalition that does not include Ben-Gvir.

William Daroff, the Conference of Presidents CEO, told i24, an Israel-based cable news station, that it was too early to engage on what the extremists mean for the future of the U.S.-Israel relationship.

“When that coalition comes together, which we will not know tonight, we will not know tomorrow, we will engage at that time,” he said. “I think it’s very important that the Diaspora is in the mix, that we are seen as we are, as a vibrant part of what makes Israel the amazing country that it is.”

Susie Gelman, a major donor to an array of Jewish and pro-Israel groups over the years, said the election could be a game-changer. “I think it’s going to put major pressure not just on U.S.-Israel relations, but clearly on the relationship between the American Jewish community and Israel,” she said.

“It will be challenging for some major American Jewish organizations going forward because this guy is a racist,” Gelman said of Ben-Gvir. “He espouses terrorism. He talks about expelling Palestinians.”

Gelman said that not speaking out now — as the group she now chairs, the Israel Policy Forum, has done — misses the importance of the moment. She noted that some of the groups now declining to speak warned Netanyahu not to truck with Smotrich ahead of the 2019 election.

“I think it was disappointing that some organizations that took a public position on Ben-Gvir three years ago did not do so this time,” said Gelman, whose group advocates for a two-state outcome to the Israeli-Palestinian conflict. “But they made a judgment call on that.”