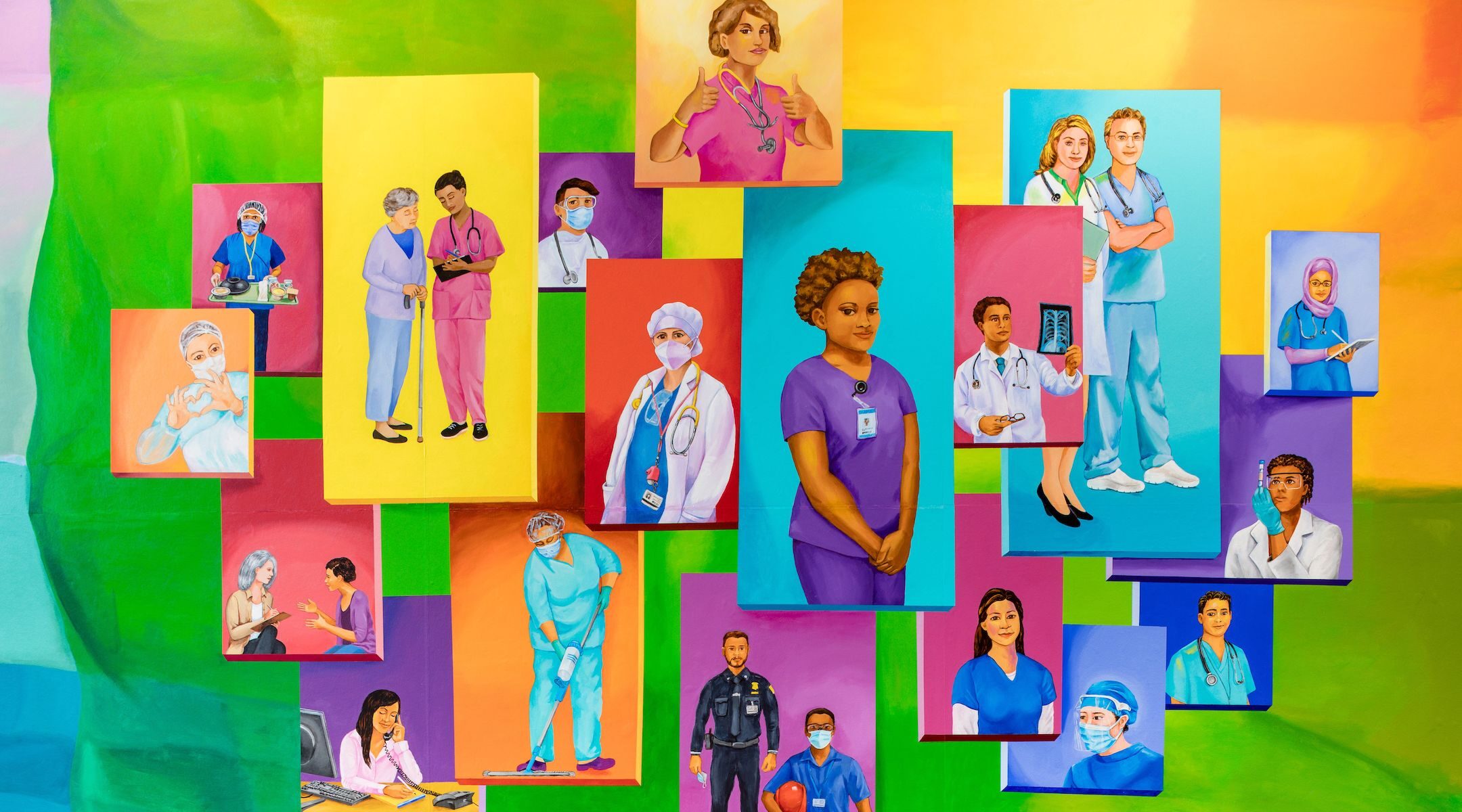 The Community Mural Project, which started in 2019, carries on a hospital system tradition dating back to the Works Progress Administration in the 1930s to create works for government buildings. Today, colorful murals can be found in all 11 of the system’s hospitals, all five rehab and long-term care facilities and nine neighborhood clinics. With 26 murals so far and 20 more to come, the Community Mural Project is the country’s largest public hospital mural program since the WPA. 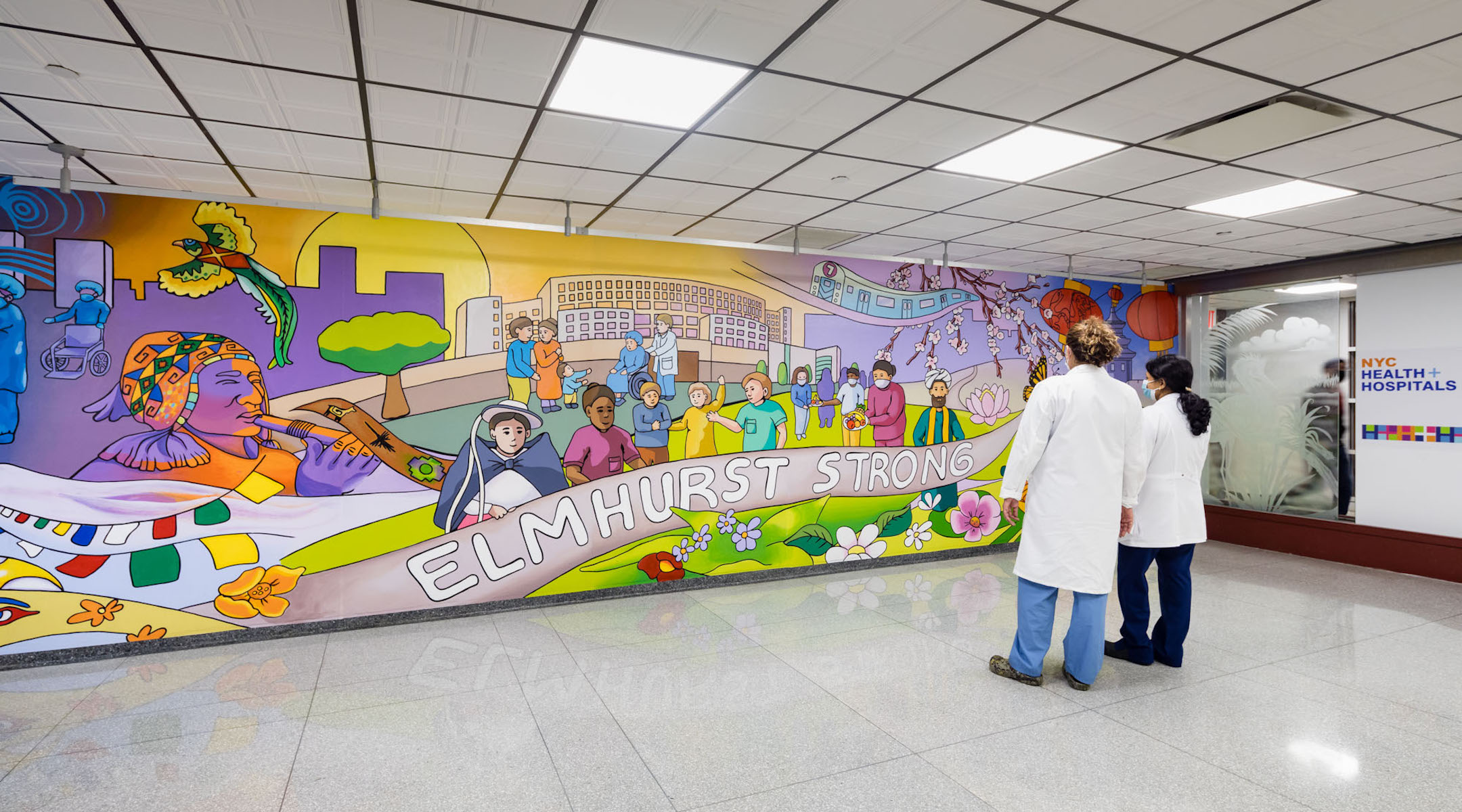 The project was funded by the Laurie M. Tisch Illumination Fund, which teamed up with NYC Health and Hospitals. Tisch is a member of the prominent family behind the Loews Corporation, who give generously to Jewish causes — her father is the late Preston Tisch, who co-founded Loews with her uncle Laurence. She says the project reflects a “Jewish value: taking care of your community and doing what you can.”

Local artists designed the murals, and the hospital system invited over 1,500 staff, patients and community members to various “painting parties” to realize them.

This month, the fund is releasing “Healing Walls,” a book of photos documenting the Community Mural Project, with essays on the power of art to address burnout, anxiety and compassion fatigue.

“Healing Walls” will be donated as a thank you gift to the more than 1,500 participants in the project. Proceeds from sales of the book will benefit the Arts in Medicine program at NYC Health + Hospitals.

The New York Jewish Week sat down with  Tisch and Rick Luftglass, the organization’s executive director, to reflect on the project, public art, philanthropy and the power of tzedakah.

New York Jewish Week: Who came up with the idea for the Community Mural Project as a way to help the community?

Laurie Tisch: We started this about four years ago. Our idea was to just provide this $10 million grant to different organizations in the nexus of Arts and Health. It was Health and Hospitals that specifically came up with the idea, as part of our grants to them, of doing these murals. My understanding is that traditionally, many of the public hospitals going back to the 1920s and ’30s, did have public art and did have murals. So it wasn’t a brand new thought, but it was an expansion of what did exist.

Rick Luftglass: When we started talking with the leadership in New York City Health and Hospitals about the arts, they said that their needs were focused around helping staff with issues like burnout, which is an epidemic in the medical profession, and around connecting to the community. So the mural project was one of the ways that they saw to knit the staff with the community members, to do something that combats stress and to help people with communications and collaboration skills. 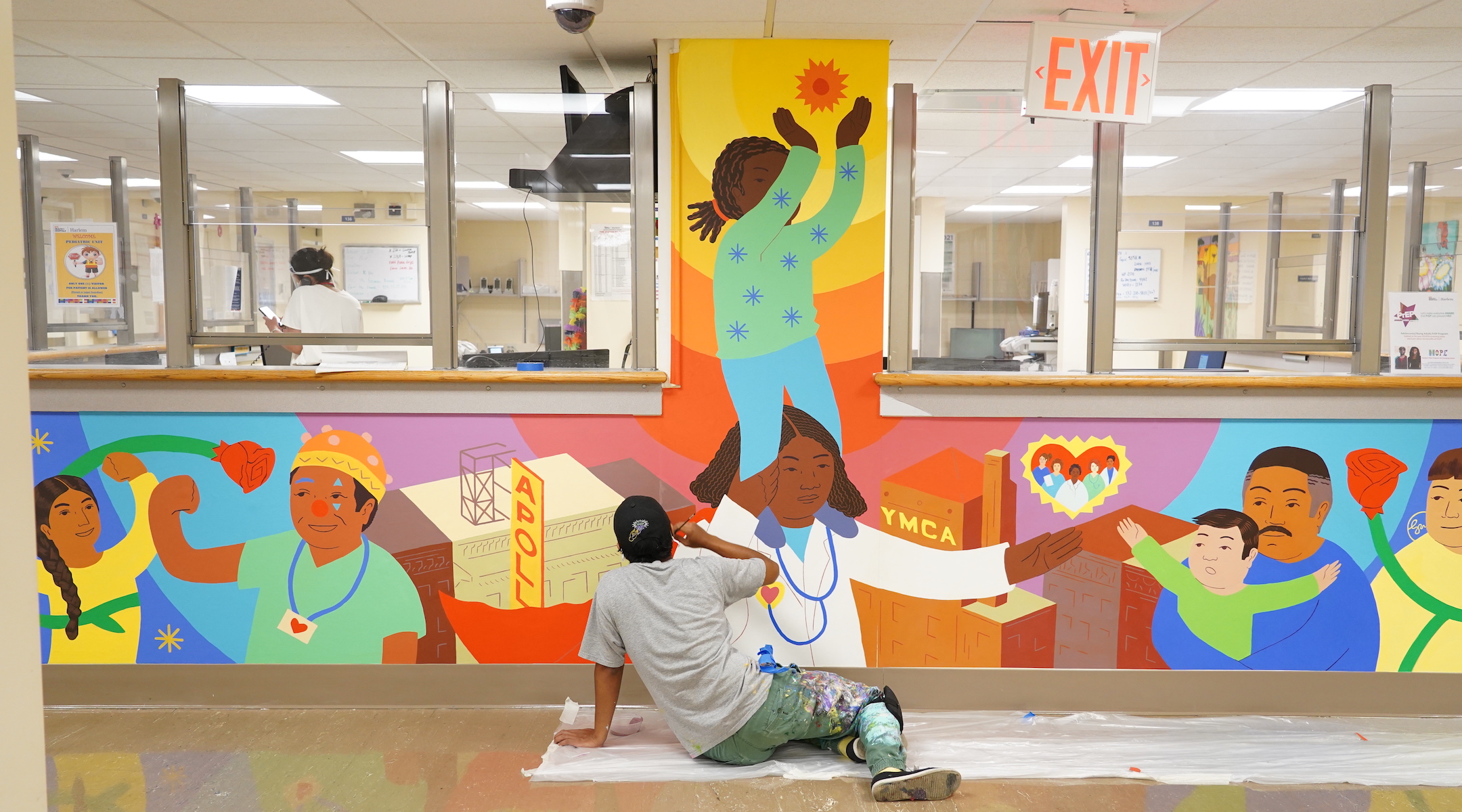 What was the process of actually making the murals?

LT: There were something like 400 applicants to draw the 26 murals, so it was not easy to become one of these muralists. Once the muralist was chosen, there were different types of meetings between the community and the muralist … so even that was a collaborative effort on what the mural should be, how it should reflect that particular community. The paint parties [to fill in the mural] were also very collaborative. Each one was painted by anyone from doctors, patients, community leaders, people in the community and hospital staff. So it’s not just the outcome that was so wonderful, healing and visually beautiful, but the process. 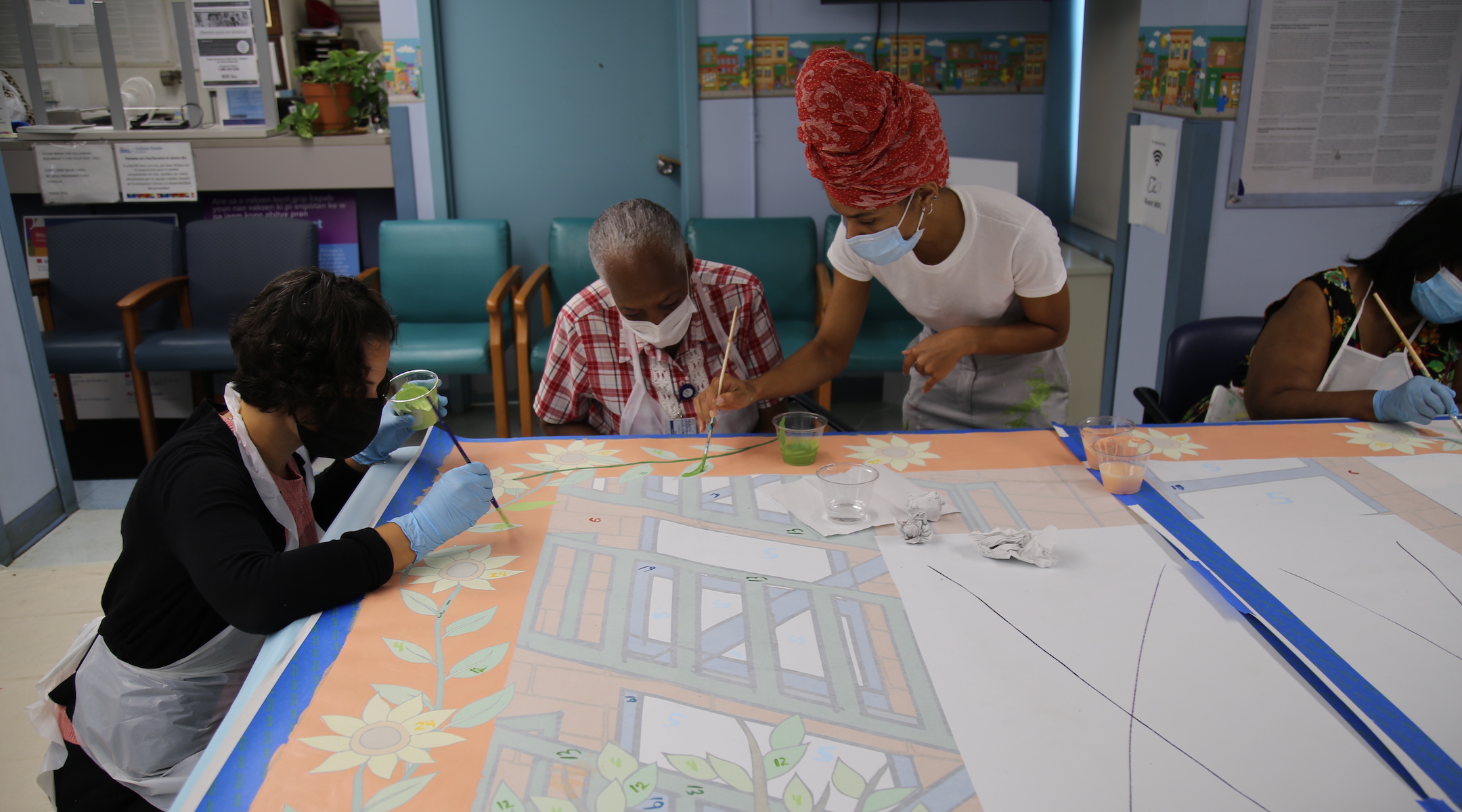 A painting party for a mural at St. Nicholas Health Clinic in Central Harlem. (Nicholas Knight)

Why is art at the core of the mission of the Illumination Fund? What do you see as the power of art to function as an equalizer and lift the city up?

LT: The mission of the Illumination Fund is access and opportunity. When I first started the foundation about 13 or 14 years ago, I didn’t know what specific programs we were going to support and develop, but I knew that [it would be] some type of leveling the playing field, like access to healthy food in neighborhoods that have very little, which was one of our first signature initiatives. It’s about really listening. It’s not a “we do this and you fit into that.” What the Illumination Fund does is say, “We’re hearing in the community that there are these needs. Tell us more about that. How can we help?”

This particular program falls under that wider mission of access and opportunity. In many of the private hospitals there are arts programs — arts educators come in and work with the patients and so on. So part of it was again leveling the playing field and acknowledging that these public hospitals should look better than they look. It’s been widely documented both anecdotally and statistically that art is a way of promoting democracy, of bringing joy, of bringing beauty, of helping people to think in more creative ways. The arts aren’t just for the wealthy or the very well-educated — it has to be for everybody, whether it’s in a museum or hospital or concert hall.

RL: In terms of New York City Health and Hospitals, in addition to the visual arts program, there will be more music and dance based programs. Beyond the arts, Laurie mentioned our $10 million commitment that we made prior to COVID. A lot of that work was focused on the cross section between arts and mental health in communities. We really expanded that work last year and are continuing to grow it to work in communities that were disproportionately affected by the COVID pandemic and the mental health fallout that came from it. We’re working with organizations in all five boroughs that serve particular affected populations, whether it was the formerly incarcerated or survivors of domestic violence, populations that just historically have their challenges but COVID upped the ante, unfortunately. 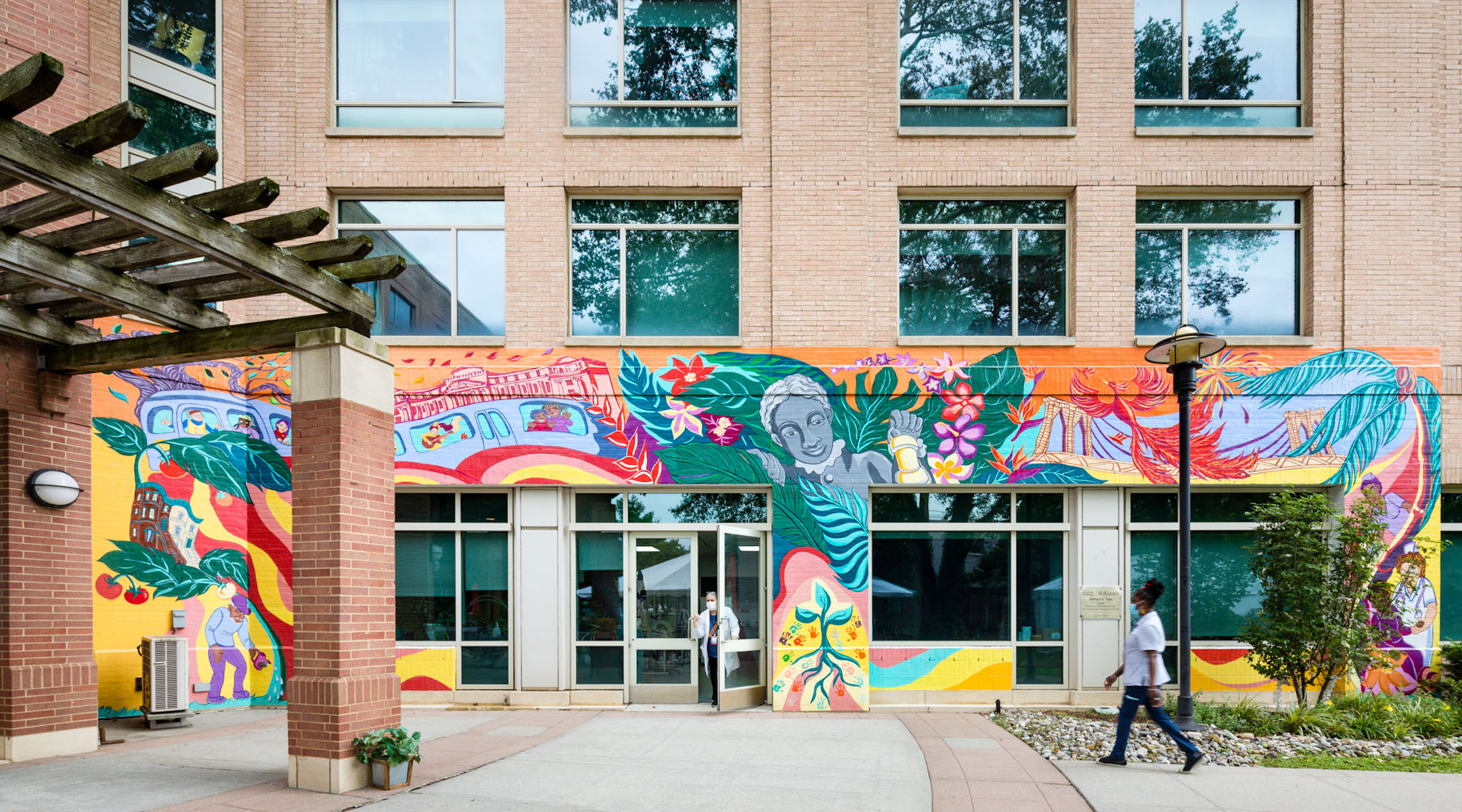 A mural by artist Peach Tao at McKinney nursing and rehabilitation center in Brooklyn. (Nicholas Knight)

How do your Jewish values and background affect the project and how do they drive your philanthropy?

LT: I grew up in a family of not so much religious values — we were Reform — but certainly Jewish values. We — my parents or even my grandparents — didn’t call it philanthropy. Starting when there wasn’t very much money, there was always acknowledgement and helping those less fortunate, especially helping the community in which one lived as well as helping the broader community. The whole foundation is certainly based on the Jewish values of tzedakah. I never call it “giving back” — I think of it as more of using resources to make important things happen that couldn’t happen without these resources, whether building a museum or hospital or helping to find a cure for a disease. I think that’s very much a Jewish value: taking care of your community and doing what you can.