In Germany, Kristallnacht goes by a different name. Here’s why. 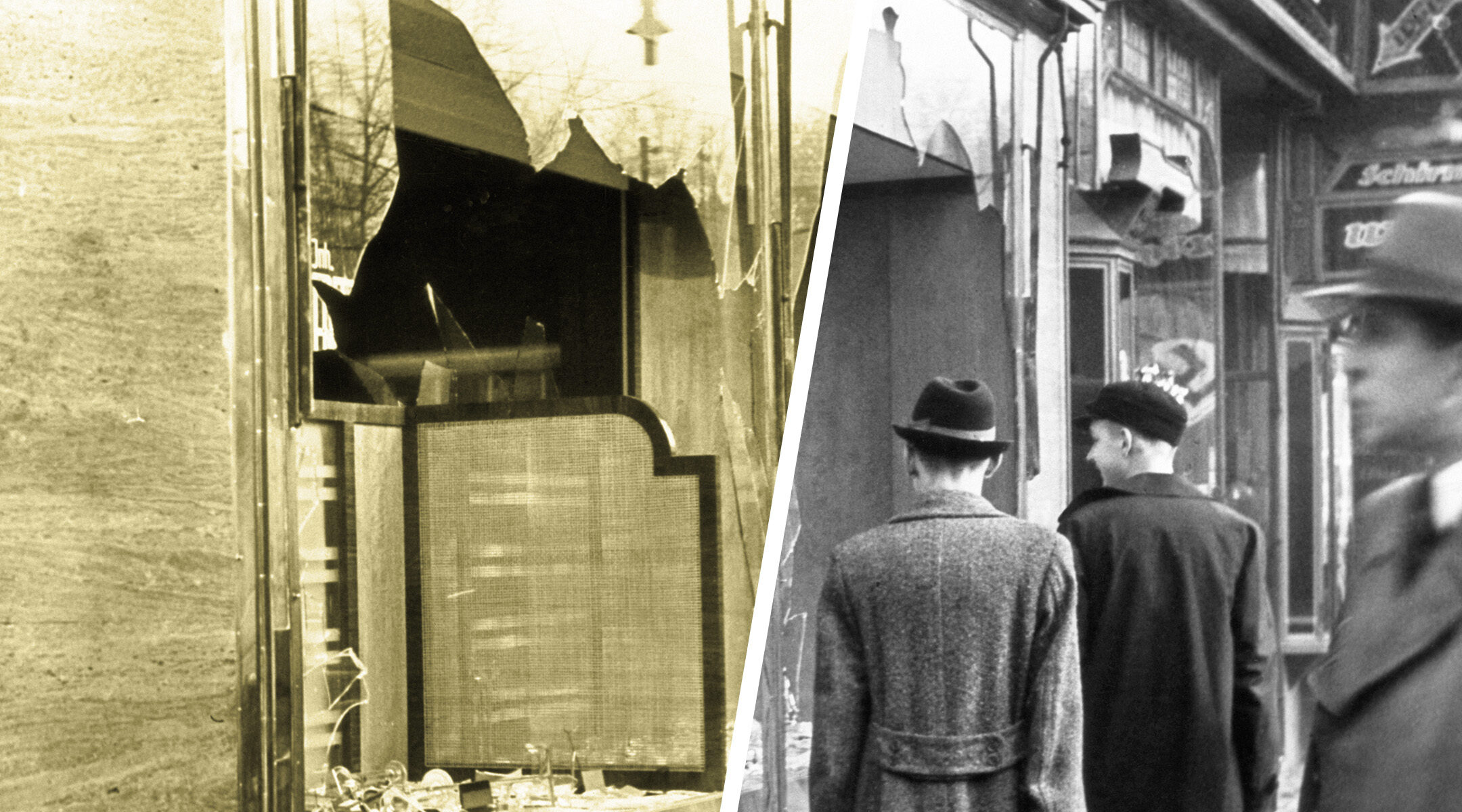 (JTA) – This week, Jewish communities across the United States are commemorating the anniversary of Kristallnacht, the anti-Jewish riots that marked a brutal turning point in the Nazi campaign of persecution.

In Germany, cities and towns also will commemorate this day, but under a different name. They refer to the events of November 9-10, 1938, as “the November Pogrom,” or variations on that term. That’s because to many in Germany, the term “Kristallnacht” — night of shattered glass — sounds incongruous.

“It has a pretty sound,” said Matthias Heine, a German journalist whose 2019 book examined the role of Nazi terms in the contemporary German vernacular. “When you know that it was a very serious and bloody and violent event, then this term isn’t acceptable anymore.”

That autumn night, government-coordinated anti-Jewish riots swept through virtually every town and city across Nazi Germany. Over several days, rioters destroyed hundreds of synagogues, looted thousands of businesses and killed at least 91 Jews; 30,000 Jewish men were sent to concentration camps.

It was a turning point in both Jewish and non-Jewish memories, said Guy Meron, historian at the Open University of Israel and the Institute for Holocaust Research at Yad Vashem, Israel’s Holocaust memorial.

“Until the pogrom, we still had a Jewish public sphere in Germany: Jewish organizations were active, and in some places in Germany Jews could still feel safe in public life,” said Meron, whose latest book, “To Be a Jew in Nazi Germany,” comes out in English next year.

And in terms of “what the public witnessed, it never happened again,” he added. “German public opinion did not like the street violence; they were not in favor of the Jews, but law and order were so important to them.” As the genocide escalated, so did the secrecy. Most deportations took place under cover of night.

Kristallnacht, or the November Pogrom, took place in broad daylight, or illuminated at night by flames. The evolution of the terms used to describe the same events speaks to nuances in the culture of remembrance in Germany and around the world.

For Inge Auerbacher, who grew up in Kippenheim, in southwest Germany, there was nothing pretty about that night.

“All our windows were broken, and my father and grandfather were sent to Dachau,” Auerbacher, 87, recalled in a recent interview from her home in Queens, New York. “It was the beginning of the end.”

“I know it as Kristallnacht,” said Auerbacher, who survived the Theresienstadt concentration camp. “I was not even 4, but I remember it.”

Angelika Antpöhler, who grew up in Berlin, remembers, too. As a 6 year old, she was confused by what she saw as she walked to school with her grandmother on Nov. 10.

“I said, ‘Look at all those people throwing shoeboxes from the shop windows!’ There was a happy mood. I remember that very well,” said Antpöhler, who is not Jewish. “They were trying all the shoes on.”

“My grandmother said to me, ‘We don’t look at that. This is hell, this is the devil at work.’”

This week, Antpöhler will share her memories in conversation with moderator Frank Laukötter at an event recalling the burning of the Aumunder Synagogue in Bremen, where she lived after the war with her late husband, Hajo Antpöhler.

It is one of hundreds of events planned across Germany marking the 84th anniversary of the pogrom. Few will use the name by which it is known around the world.

“Kristallnacht is a much too pretty word for something so terrible, and I don’t use it anymore,” said Jessica Ohletz, vice principal of the Julius-Leber High School in Breisach, a town in southwest Germany. Ohletz is taking students for the first time to participate in a program on “The Days of Terror” at the Blue House, an educational establishment located in the town’s former Jewish religious school and community house.

“I personally believe that all the terms create false associations,” said Christiane Walesch-Schneller, who chairs the board of the Blue House. “For me, there is no term yet which I feel is adequate.”

In Breisach, “the terror went on for three to four days,” she said. “They were looting Jewish stores, attacking Jews in the street.” Sixty Jewish men were transported to the Dachau concentration camp. And “the Jewish community received the bill for the gasoline that was used to burn the synagogue.”

Related: How JTA covered the first pogroms of the Holocaust at the time

In Germany, the terms “November Pogrom,” “Pogromnacht” or “Reichspogromnacht” were slowly introduced in the late 1970s, when Germany’s postwar generations began challenging their parents’ sanitized version of history.

The history of the Kristallnacht name is unclear. In their 1988 lexicon, “NS-Deutsch” (“National Socialist German”), authors Karl-Heinz Brackmann and Renate Birkenhauer say “the harmless-sounding name was also used officially to refer to the mountains of broken glass lying on the streets.” But in 1998, German linguist Cornelia Schmitz-Berning decided not to include it in her “Vocabulary of National Socialism,” as she found “no contemporary documentary evidence of the term being used.”

“It was never used in official talks or papers of the time; it was popular jargon,” said Heine, whose 2019 book “Burnt Words: When we still talk like the Nazis — and when we don’t” also explores the etymology of loaded words.

Whatever its source, “there are good reasons to reject the term,” Heine said. For one thing, it might distract from a speaker’s point: “You can interrupt any serious conversation in Germany by saying your counterpart used a Nazi word.”

There was even a 1982 hit by the German rock group BAP called “Kristallnaach”: In the Cologne dialect, the group rants about right-wing populism, materialism and other ills of modern Germany, with the refrain, “It smells like Kristallnacht.”

“The song is trivializing history: people died,” said Frank Laukötter, art historian and board member of the Kulturkirche St. Stephani Bremen. “It goes in the wrong direction.”

The earliest attempts to effect a semantic change can be traced to 1978, said Berlin-based historian Rabbi Andreas Nachama. At the time, Heinz Galinski, then head of the Berlin Jewish community, said in an interview that “more than just glass was broken. People were killed.”

That same year, on the 40th anniversary of the pogrom, German lawmaker Klaus Thüsing proposed substituting the term “Reichspogromnacht” for “Reichskristallnacht.”

In 2007, the International Raoul Wallenberg Foundation publicly called for an end to the use of “Kristallnacht” to describe “such a grave event. … We must recognize that there were a lot more broken than glass.”

“Here in Germany, people are very quick to trivialize this history, they say, ‘Oh, it was a long time ago,’” said retired Protestant minister Annemarie Werner of Berlin, one of the signatories to the appeal. “The expression focuses on damage to things, and no one speaks of those who were murdered or sent to camps.”

Though the term Kristallnacht has been largely dropped from official or public parlance in Germany, many English-speaking scholars, and institutions such as the United States Holocaust Memorial Museum, “retain the term as a necessary evil,” said Patricia Heberer Rice, senior historian at the museum’s Jack, Joseph and Morton Mandel Center for Advanced Holocaust Studies.

“Using ‘Pogrom Night’ or ‘November Pogrom’ might confuse American readers, who do not have the same historical connections with the event as Germans do,” she said in an email to JTA. “Most Americans would not understand that Kristallnacht is a euphemism or how it is so.”

Moreover, she said, most Americans associate the word “pogrom” with the former Russian empire, not with Germany. And lastly, Rice added, there is a practical consideration: Kristallnacht is the search term most-English-speakers use, “a fact which must be weighed for things like our searchable online encyclopedia.”

It’s another story in Israel, said the historian Meron.

“In Hebrew, it never sounded like the language of the perpetrators,” he said.  But after talking with German colleagues, he stopped using the term Kristallnacht — though it hasn’t been easy. “Each time I write an article I have to explain it to the editors again.”

In the English-speaking world, the term must be viewed with understanding, said Charlotte Knobloch, head of the Jewish community of Munich and Upper Bavaria, in an email to JTA.

“It has become such a distinctive marker for all remembrance of November 9, 1938,” a day whose aftermath she witnessed as a 6-year old child, walking with her father past their fire-blackened synagogue in Munich, stepping over shards of glass. Knobloch, now 90, survived the war in hiding with a Catholic family.

“What matters most — and certainly more than the question of label — is that people carry on the tradition of remembrance,” she said. “If a well-established term can serve that purpose, then I do not think replacing it would do much good.”

When Antpöhler speaks to the Bremen community on Tuesday, she will share the story of her late husband, Hajo, whose family lived a short walk from the Aumund Synagogue. Hajo had invited school friends to celebrate his eighth birthday on Nov. 10. The son of a local fireman turned him down immediately, as Hajo Antpöhler recalled in a poem many decades later: “The schoolfriend couldn’t come to the birthday party; he wanted to watch his father, the fireman. The synagogue was supposed to burn, so the neighboring houses had to be protected.”

On the empty corner lot where the synagogue once stood, he described the “blue pansies and the bright-eyed buttercups stepping between the young nettles; a suitcase broken open, empty cans thrown over the wire fence. … All those who prayed and sang praises here are smoke.”

“After Kristallnacht, I realized somehow they think we are different,” said Auerbacher, who has shared her story in numerous books, interviews and addresses, including at the German Bundestag last Holocaust Remembrance Day. “The glass was crackling like crystals falling. And it was, in a way. When you think of crystals, you think of something expensive. They wanted to break the spirit and the heart and the soul of a people.”