25,000 Jews Under Arrest in Wake of Worst Pogrom in Modern German History; 4 Dead 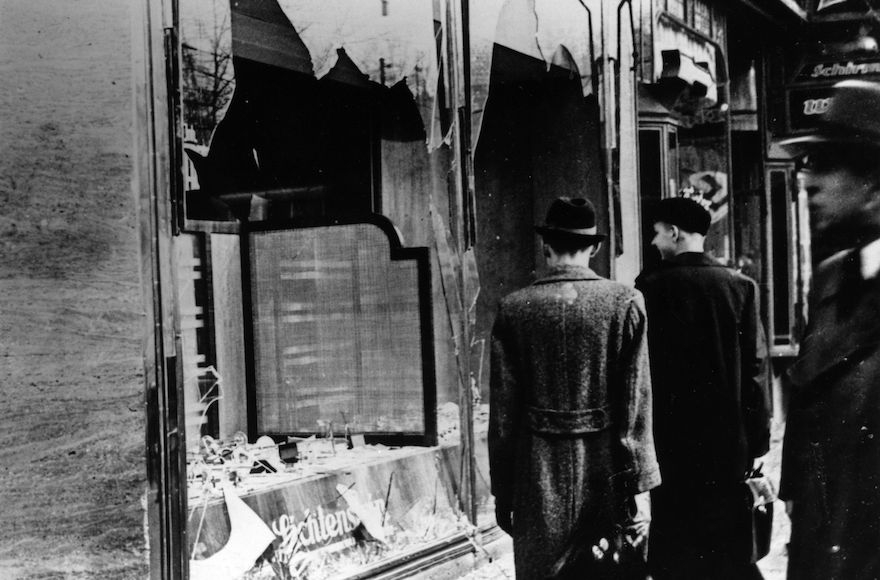 An estimated 25,000 Jews were under arrest today in the wake of the worst outbreak of anti-Jewish violence in modern german history, which left throughout the nation a trail of burned synagogues, smashed homes, wrecked and pillaged shops, and at least four known dead. police seizures of Jews continued throughout the night and this morning. three thousand were in custody in berlin alone.

It was reliably learned that the police have been ordered to halt general seizures but to continue activities in cases of criminal charges. such charges include spreading of “atrocity propaganda” and possession of weapons.

Jews who spent the night at the Alexanderplatz headquarters were herded into heavily overcrowded rooms. in the morning, scores of them, mainly part-Jews, former army officers and persons with emigration visas, were released. the bulk of the remainder reportedly have been interned at the Oranienbung concentration camp. all Jewish organizations, with the exception of the hilfsveein, central aid society, have been closed.

Following yesterday’s nationwide arrests of Jewish leaders, additional leaders were summoned to the Gestapo headquarters here this morning. twenty arrested Jewish journalists were recalled and notified that the ban on Jewish publications would continue for three months.

At Koenigsberg, in East Prussia, 2,000 Jews were summoned to police headquarters, forced to hand over the keys to their homes and given a fortnight to leave the city.

Meanwhile, Nazi leaders were reported to be discussing measures for expropriation of Jewish fortunes throughout the Reich and deportation of all foreign Jews. Julius Streicher, Governor of Franconia and the Reich’s high priest of anti-Semitism, was said to have been called to berlin to head a “committee for anti-Jewish activities.”

Associated Press and United Press dispatches from Berlin said that plans for restoration of a ghetto for Jews were under way by nazi leaders. according to the reports, credited to nazi informants, the Jews would be compelled to live and do business only in the ghetto of their city, with only a sufficient number of shops to supply Jewish needs being tolerated.

Propaganda Minister Paul Joseph Goebbels, upon whose order the 14-hour wave of violence had been checked, denied today that the demonstration against the Jews were government- inspired.

In a statement to assembled foreign correspondents, the Propaganda Minister warned Jews abroad “in the interest of their co-religionists” to be “very reserved” in their future actions. Declaring legal measures would be taken against the Jews in a few days and the problem would be solved ” in our manner,” he said! “if i had organized them (the demonstrations) they would have had an entirely different character and an entirely different result.”

Recalling previous official anti-Jewish demonstrations, Goebbels added: “I assure you it would not have been difficult for me to gather four or five or six thousand persons to demonstrate against jewry. i repeat, we do not want to solve the problem by force but by legal means. however, i must state that our attitude will depend in large measure upon the attitude of Jews abroad and the best advice i could give them in the interest of their co-religionists is to be very reserved.”

At the beginning of the interview, Goebbels told the correspondents he intended to dispel “misunderstandings” abroad concerning yesterday events. he denied reports that fire brigades had not tried to save burning synagogues, that the wrecked Jewish shops had been looted, or that police had failed to intervene, but admitted that “individual acts of looting” might have occurred. Goebbels expressed particular irritation with American press reports of the pogrom which likened the looters to gangsters and described the whole affair as being reminiscent of the middle ages. “such journalistic method’s,” he threatened, “will prove a boomerang for their Jewish inspirers.”

Controlled by the Nazi high command, bands of Nazis carried out nation-wide depredations against the Jews for 14 hours, in revenge for the fatal wounding of a german embassy official in Paris by a Polish Jew, before Propaganda Minister Goebbels called a halt and promised legal reprisals against the Jews. the attacks, however, continued several hours after Goebbels issued the following statement:

“The justified and comprehensible indignation of the German people over the odious Jewish murder in Paris expressed itself during the night in measures of reprisal against Jewish establishments and shops. I now appeal to the entire population, urging it to cease immediately all demonstrations and actions against the Jews. a definitive answer will be made to the Jewish attack in paris by legislative means.”

Two Jews were known to have been shot dead, one at Polzin, Pomerania, the other at Barnstorf, near Bremen, where Nazi bands clashed with occupants of a Jewish training farm. the two other known deaths were suicides, a Munich banker and his wife leaping from a without of their home.

Nine of Berlin’s twelve synagogues were set afire, at least two of them being completely destroyed. a synagogue in Munich was also razed by fire and at least three others were put to the torch in Franconia.

In Berlin, throughout the morning and afternoon, bands of Nazis shouldered their way through gaping holes left in broken shop windows and completed the work of destruction begun by organized bands at four o’clock yesterday morning. they smashed fixtures, hangings and furniture’s reducing the interiors of the shops to piles of refuse. gaping crowds followed their progress while police, who were much in evidence after the noon hour, loitered in the neighborhood ignoring the proceedings. by mid-afternoon, it seemed that every Jewish shop in Berlin was doomed to complete destruction.

Scenes of destruction took place in every quarter of Berlin. Plundering, smashing of furniture and even wrecking of Jewish homes occurred in the northeast quarter of the city, where the poorer Jews live. late yesterday smoke was still pouring from the great Fasanenstrasse Synagogue, with firemen standing by to prevent the blaze from spreading to nearby buildings. the pr synagogue, which was put to the torch a second time after firemen had extinguished the first blaze, was gutted. both edifices were valued at several million marks. damaged to a lesser extent were the Oranienburger synagogue, Berlin’s largest, and the Lutzowstrasse Synagogue, where raiders confined their attention to holy objects.

Throughout the city hardly a single Jewish shop or restaurant window was left intact as bands proceeded systematically from street to street, smashing panes with hammers and stoning these beyond reach. in some sections plundering followed swiftly.

The headquarters of the Zionist Organization, occupying an entire building on Meineckestrasse, were reduced to splintered wood and mounds of torn records. the building adjoining the Oranieniurgerstrasse synagogue, housing the Jewish community headquarters, was untouched.

Repeated calls to the police riot squads began frantically when the campaign was launched at four o’clock yesterday morning, but they went unanswered by order. the fire department, however, responded to calls and did its best to keep the flames from spreading.

A synagogue at cologne was destroyed by fire. the Jewish community building in that city was wrecked and numerous arrests of Jews were reported. at Erfurt, in Thuringia, all male adult Jews were reported imprisoned. additional arrests were made at Braunschweig and kottbus.

Several hundred Munich Jews were rounded up by the police and ordered to leave the country within a few hours or be sent to concentration camps. since most of them had no passports, and those with passports had no visas, an indefinite stay at Dachau concentration camp was considered likely. arrests of Jewish leaders were reported in Munich, Nuremberg and elsewhere. scores of Jews fled Breslau, seeking safety in the countryside.

The Berlin raiders were mostly civilian-dressed and carried short daggers, signifying membership in uniformed nazi formations. they spared the headquarters of the Reichs-verband, the hilfsverein and the centralverein, principal Jewish representative and relief organizations.

While the campaign did not get under way until four a.m., preliminary forays occurred earlier and the process of destruction was still going on when children started off to school. Not until the first wave of destruction was over were police seen on the streets in any numbers.

The Nazi press dismissed the violence in two brief paragraphs, asserting: “Spontaneous demonstrations against Jews took place all over Germany as people gave vent to their feelings with respect to the death of Ernstvom Rath (third secretary of the german embassy in Paris). The windows of some Jewish shops were broken and synagogues, the center of inimical talmud learning, were set afire.”