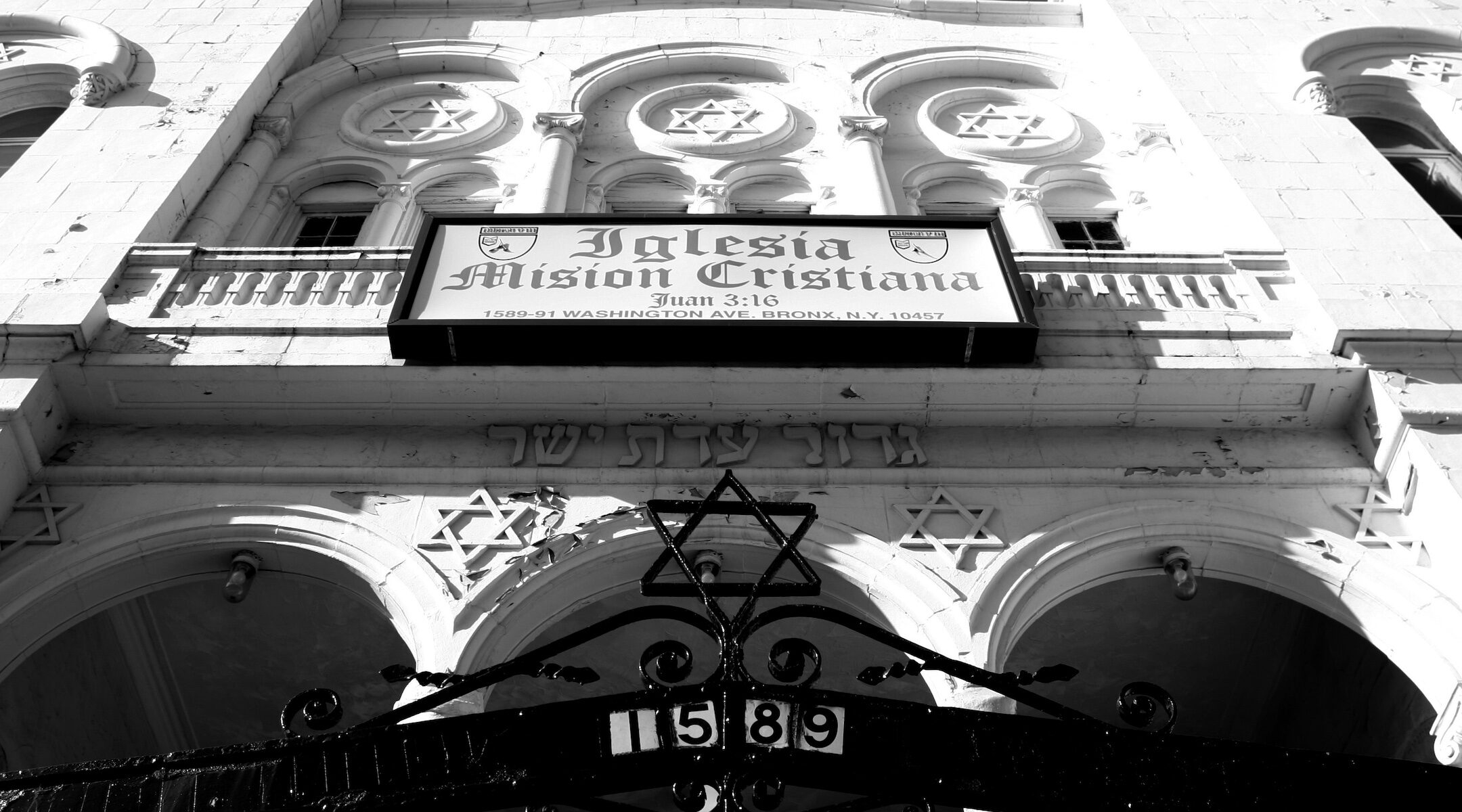 The former synagague Beth Hamedrash Hagadol on Washington Ave. in the Bronx is now a church. This photo is part of the exhibit "Remnants of the Jewish Bronx" from Julian Voloj, which is on view in the Henry S. Miller Judaica Research room at Fordham University. (Julian Voloj)
Advertisement

(New York Jewish Week) – A Catholic university may be the unlikeliest place for what may be the largest depository dedicated to the Jewish history of the Bronx.

But at Fordham University — the private, Jesuit institution in the Bronx — decades worth of archival documents and artifacts from the local Jewish community have found a home, thanks to its Jewish studies center.

For the last three years, Fordham has been collecting and cataloging items that detail a once-thriving Jewish community in the Bronx: yearbooks full of Jewish last names, bar mitzvah invitations, phonebooks full of Jewish-owned businesses — all the simple transactions that define an era in history.

The archive at Fordham is one of the only physical collections of everyday material from Jewish residents of the borough, according to Magda Teter, the co-director of the Center for Jewish Studies at the university, who spearheaded the project.

“It’s not only preserving a piece of New York Jewish history, but also a way of life,” Teter told the New York Jewish Week. “Bringing this voice to the dominant Christian identity of Fordham and teaching about Jews [as a minority] within the dominant cultures is very important.” 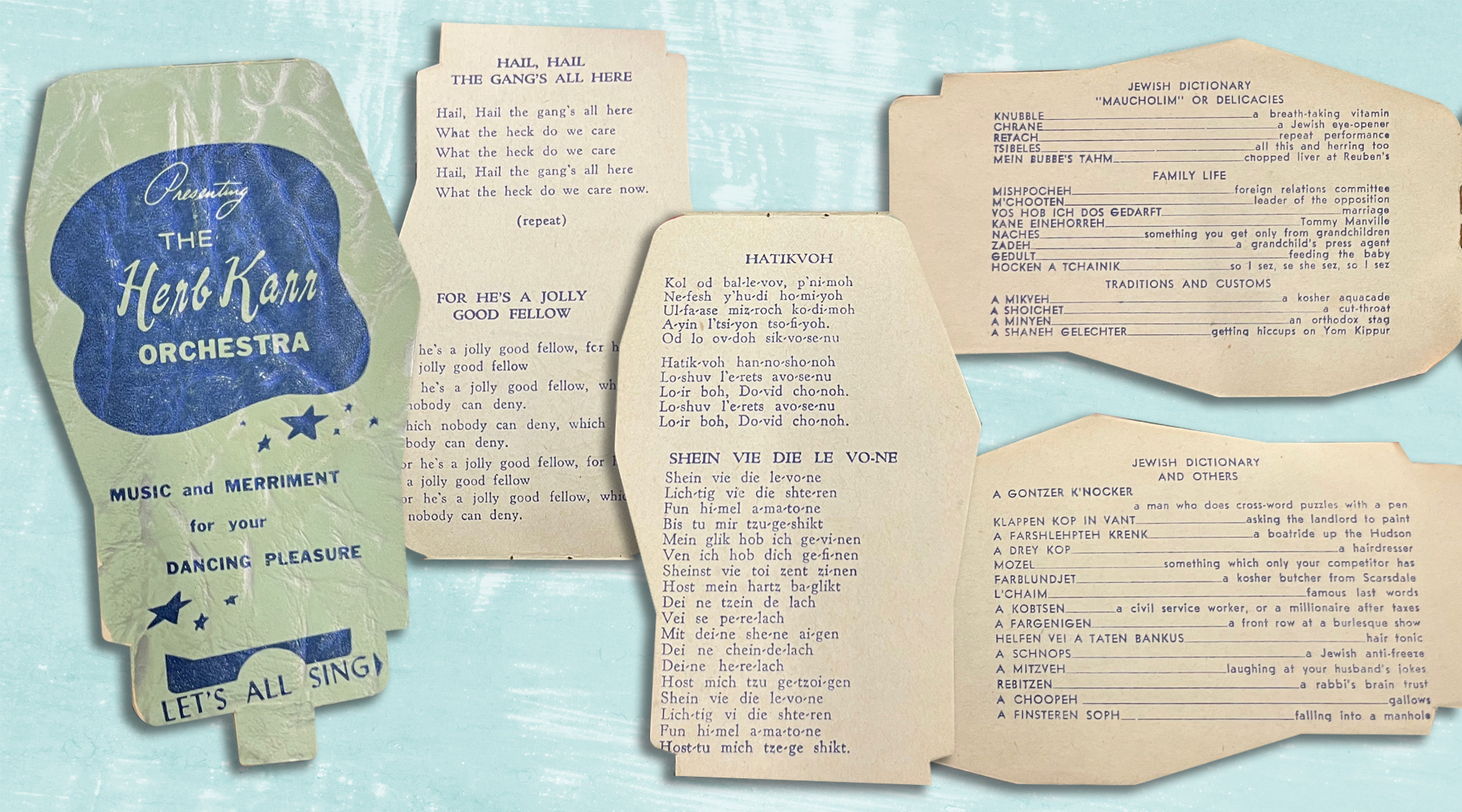 A song and dance book in the Fordham University collection features the lyrics for “Hatikvah” and “For He’s a Jolly Good Fellow,” and a “Jewish dictionary.” (Julia Gergely)

At the community’s peak in 1930, the Bronx was approximately 49% Jewish, according to the borough’s official historian, Lloyd Ultan. South of Tremont Avenue, the number reached 80%. Most of the Jewish Bronx was of Eastern European descent; many were first generation Americans whose parents had immigrated and lived on the Lower East Side, but who could now afford to live in less cramped neighborhoods with more trees and wider streets.

Though there is a strong Jewish community in the neighborhood of Riverdale, most of the Jewish community moved out of the Bronx for the suburbs after World War II when mortgages for white would-be homeowners were being subsidized by the government and Black and Latino communities were steered to Bronx neighborhoods they couldn’t afford or that the city had chosen to neglect. The Jewish population of the Bronx dropped from 650,000 in 1948 to 45,000 in 2003. Many of the synagogues have been converted for other uses, and the physical legacy of the Jewish community there has begun to erode over time, making an archive all the more necessary.

While Teter was always interested in collecting items from the Jewish Bronx, the archive got an unexpected boost from a member of the public. In the spring of 2020, at the height of the pandemic, Fordham hosted a virtual event, “Remnants: Photographs of the Jewish Bronx,” which featured evidence of the area’s faded Jewish history gathered by writer and photographer Julian Voloj. (Voloj is the husband of the New York Jewish Week’s managing editor, Lisa Keys.) 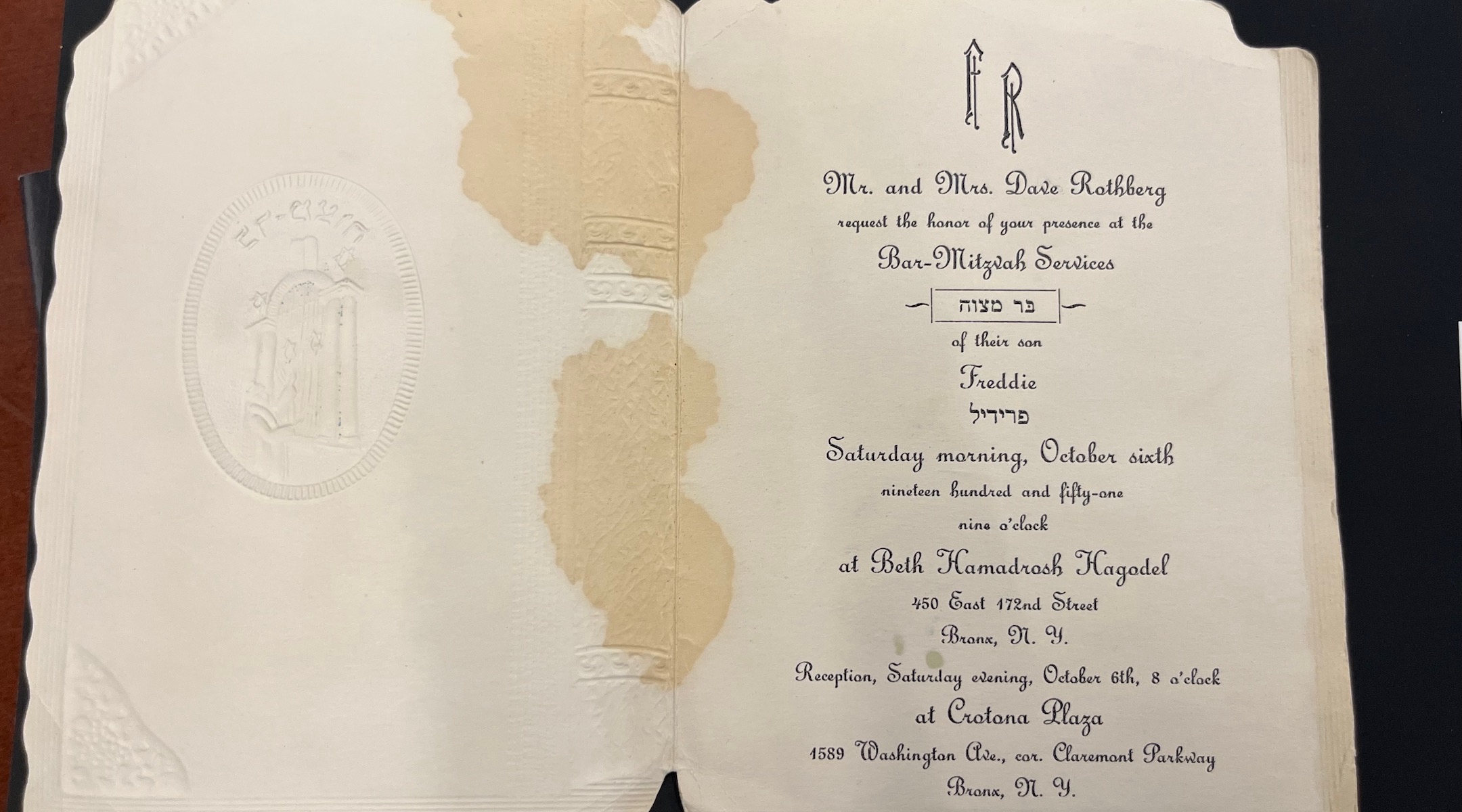 An invitation for the bar mitzvah of Freddie Rothberg, which took place on Oct. 6, 1951 at Beth Hamedrash Hagadol. (Julia Gergely)

In the audience was Ellen Meshnick, who had grown up in New York and now lives in Georgia. Inspired, she offered Fordham a trove of material her parents, Frank and Martha Meshnick, had kept throughout their lives in the Bronx. The boxes included donated yearbooks from Morris High School and Walton High School, songbooks, bar mitzvah invitations, a marriage certificate, receipts for a flower delivery — even a document from the hospital from when she was born — mostly from the 1930s through the 1960s.

The donation significantly bolstered what materials Fordham already had on hand, which included less personal but still unique items like matchbooks from kosher restaurants. Now, Teter is growing the archive through other private donations and occasionally by purchasing materials online — personal family archives, books about Bronx Jewish history, songsheets and the like. 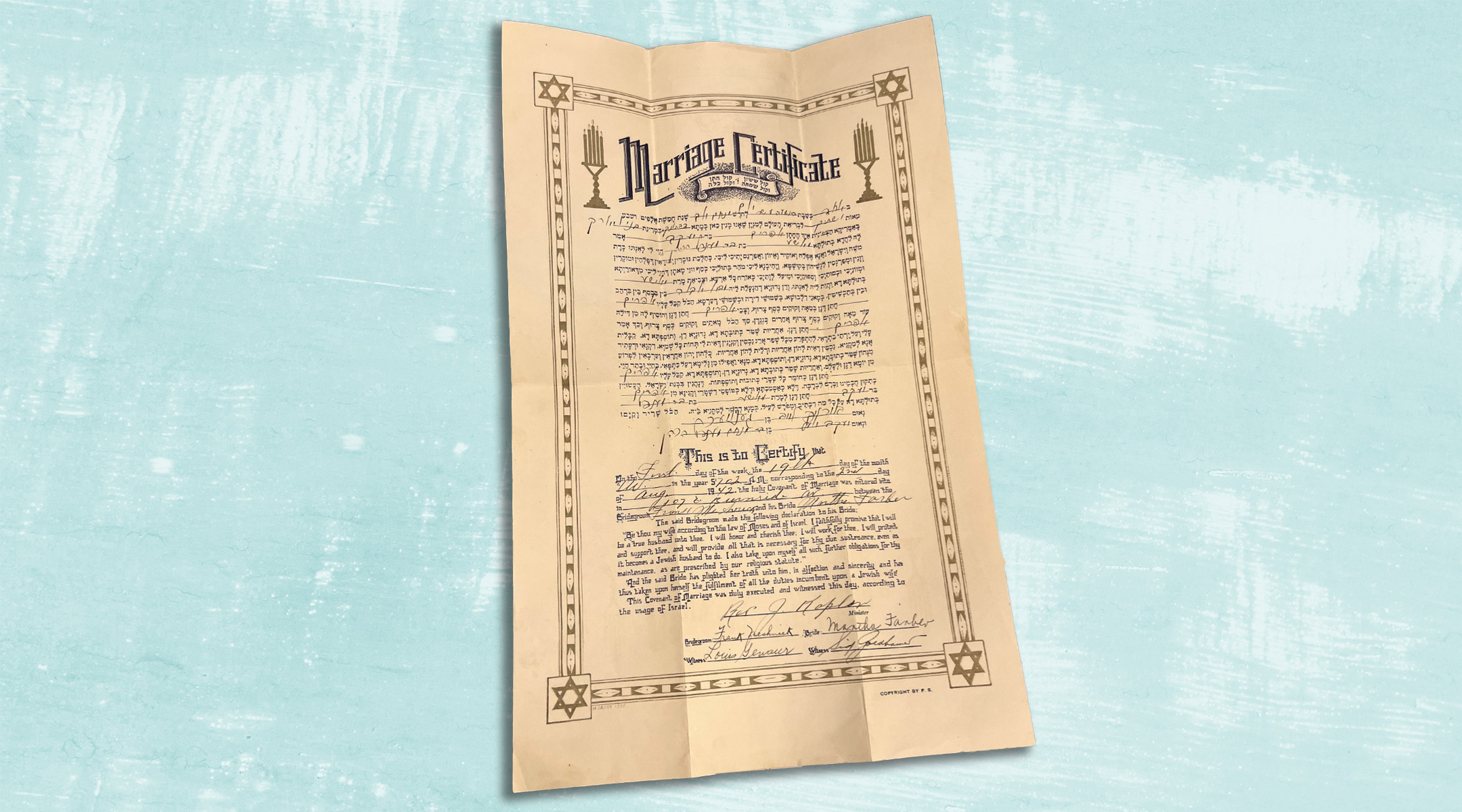 The marriage certificate, or ketubah, recognizing the marriage between Frank Meshnick and Martha Farber on Aug. 23, 1942. The certificate was part of an archive donated to Fordham University by the couple’s daughter Ellen. (Julia Gergely)

“They may not be the most beautiful things, but we are interested in what people actually used and lived with,” Teter said.

Teter said that while the American Jewish Historical Society in Manhattan does collect the types of quotidian and personal items that American Jews kept with them in the last few centuries, they don’t have much that uniquely focuses on Jewish life in the Bronx.

The entire collection is part of a greater effort by Teter, the Jewish studies center and the librarians at Fordham to increase awareness about Judaism and Jewish people. “I will not hide that I think it’s an important way to fight antisemitism — to teach Jewish history and Jewish culture in all its colors and in all its experiences,” she said. “It enriches the students’ appreciation and understanding of Jewish life beyond how Jews are usually portrayed.”

The Center for Jewish Studies at Fordham is relatively new: The college began offering a Jewish studies minor in 2016, and opened the department in 2017. At the time, the highlight of the library’s archives was the Rosenblatt Holocaust collection, which was funded by an alumnus. Since 1992, the library has amassed over 11,000 titles, videos and artifacts on the Holocaust, according to Director of Libraries Linda Loschiavo.

When Teter arrived, Loschiavo worked with her to bring in historical Passover haggadahs from all over the world. Fordham now possesses two Italian haggadahs from the 1660s, as well as Jewish artifacts from unexpected places, like playbills from Jewish Bollywood.

Last month the university opened the Henry S. Miller Judaica Research Room on the fourth floor of the campus’ main library — named for one of Fordham’s first Jewish students, who graduated in 1968. Miller, a leader of a financial restructuring firm, is now a trustee of the college.

Fordham President Tania Tetlow described herself jokingly as “a wannabe Jew” at the room’s unveiling. “I’ve understood how deeply intertwined Judaism and Catholicism are,” she said, “and the connections we have of the deep intellectualism of both faiths, of the desire to study text and the interpretation of text going back for thousands of years, of the love of ritual — and the central place of food and guilt!” 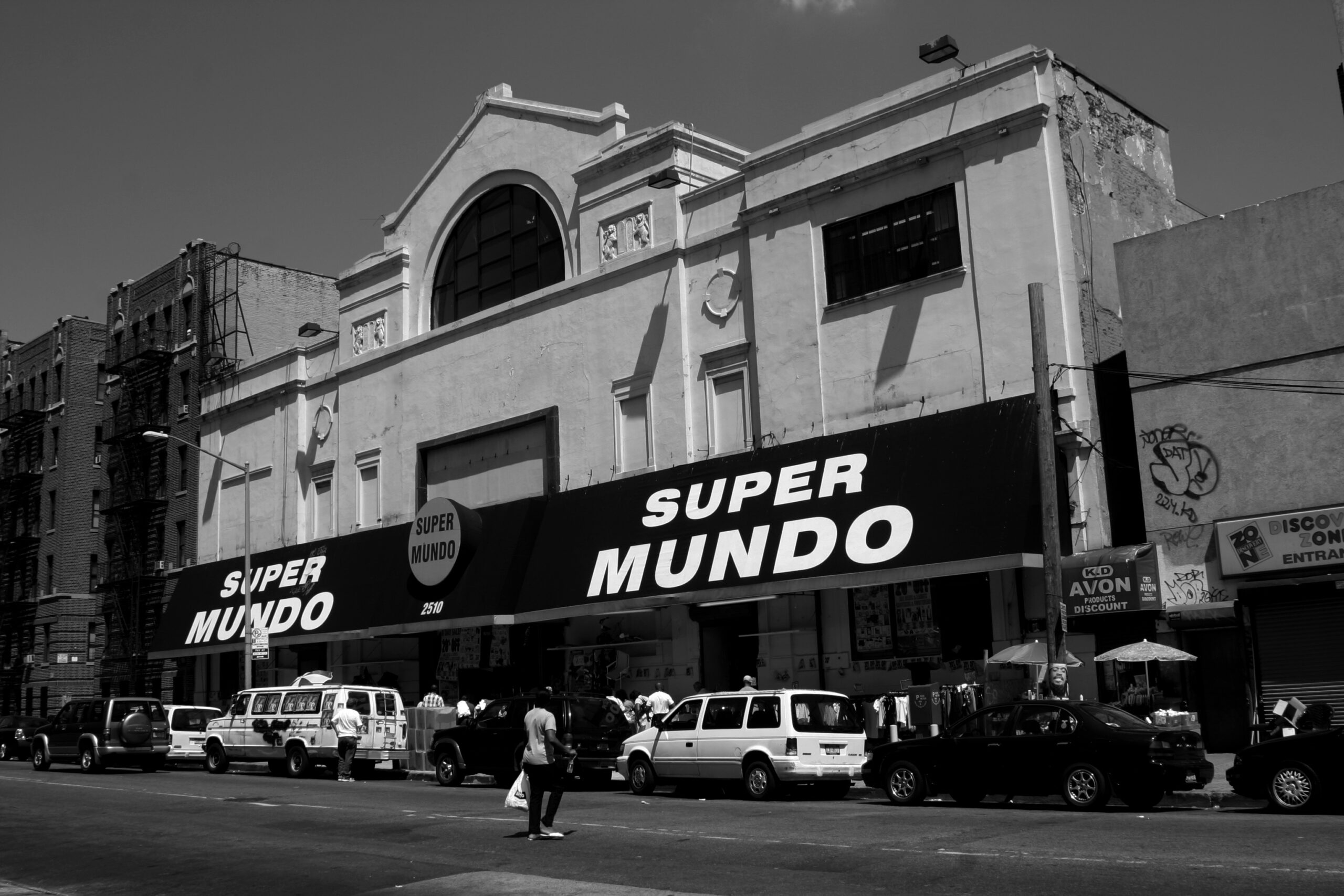 “At the moment, we envision that the research room will be a space for exhibitions that would foster the curatorial skills of our students and that will bring Jewish art and artists to campus,” Teter said. “We would now be able to display their art and combine the exhibitions with some items from the Judaica collection.”

The research room is currently displaying Voloj’s Bronx photographs, along with some of the recently acquired local archival materials, curated by sophomore Reyna Stovall, who is interning at Fordham’s Jewish studies center this semester.

“It is really, really rewarding,” said Stovall, who is Jewish. Stovall became involved in the Center for Jewish Studies because of her interest in Holocaust studies, but as she began her internship, she was excited to work on the archives cataloging the once thriving Jewish history of the Bronx. 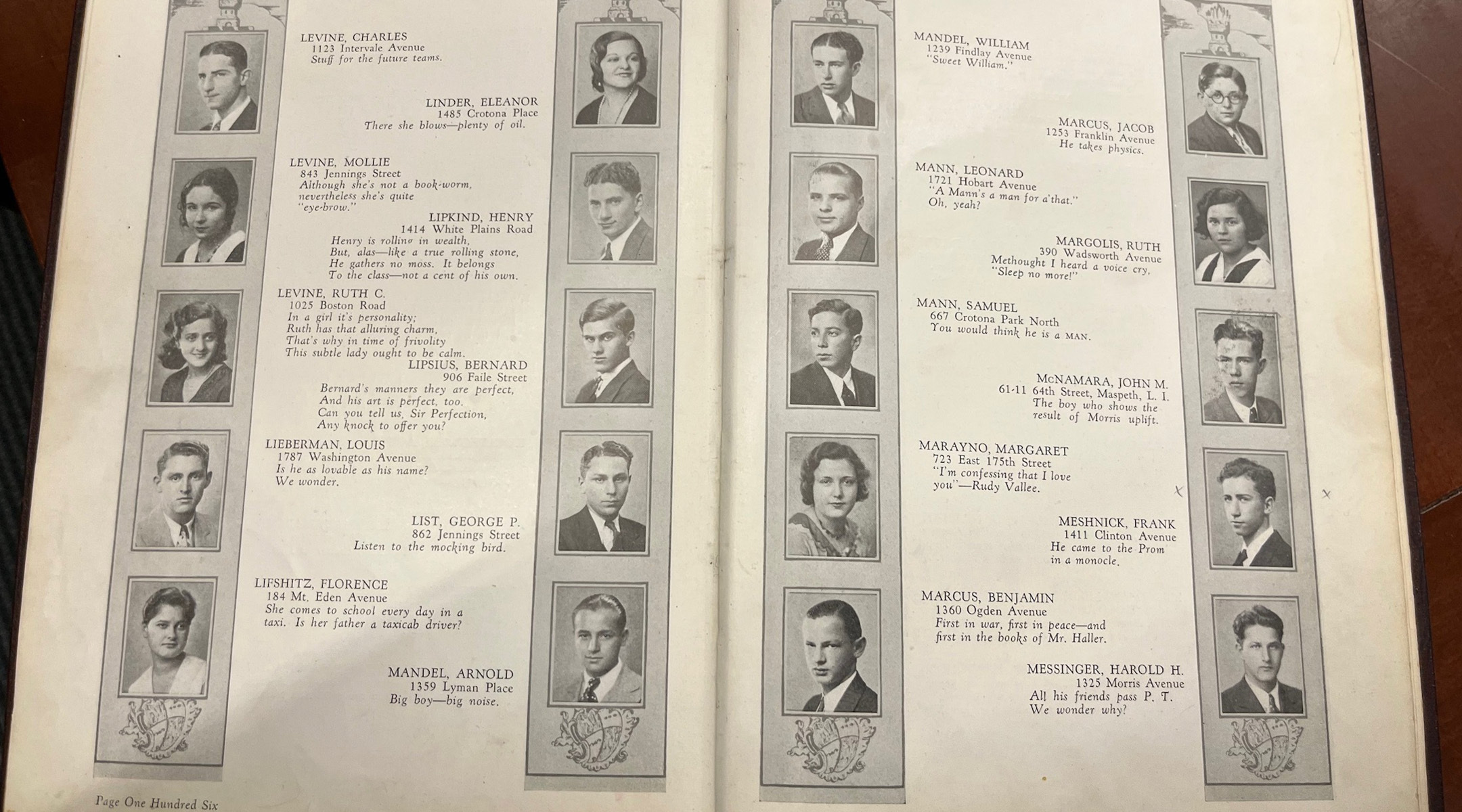 The yearbook photo of Frank Meshnick (bottom right), who graduated from Morris High School in Morrisania in 1931. (Julia Gergely)

“It’s pretty amazing that they have the collection to begin with,” she added. “It really shows Fordham’s commitment to diversity and inclusivity that they’re willing to take on this massive collection of Judaica, even though that’s not the religion that the school was founded on.”

Teter estimates there are about 300 Jews among the school’s 15,000 undergrads. As a result, the Center for Jewish Studies and the research room offers students from all backgrounds the opportunity to learn more about Judaism — as well as marginalized communities in general, and connect their stories to their own lives.

“Our identity grew to showcase Jewish studies at the intersection and in conversation with other fields and areas of study,” Teter explained.

The Center’s goal, she added, is “to make students, faculty and the public realize that studying Jews is not just for Jews, and that they can learn so much about the areas of their own concern and interest by studying Jews.”

“Something magical happens when you give students the opportunity to work with historical artifacts, and really touch history,” Teter said. “That’s what I think inspired the director of the library to devote that space to that kind of research and to that kind of student experience.”