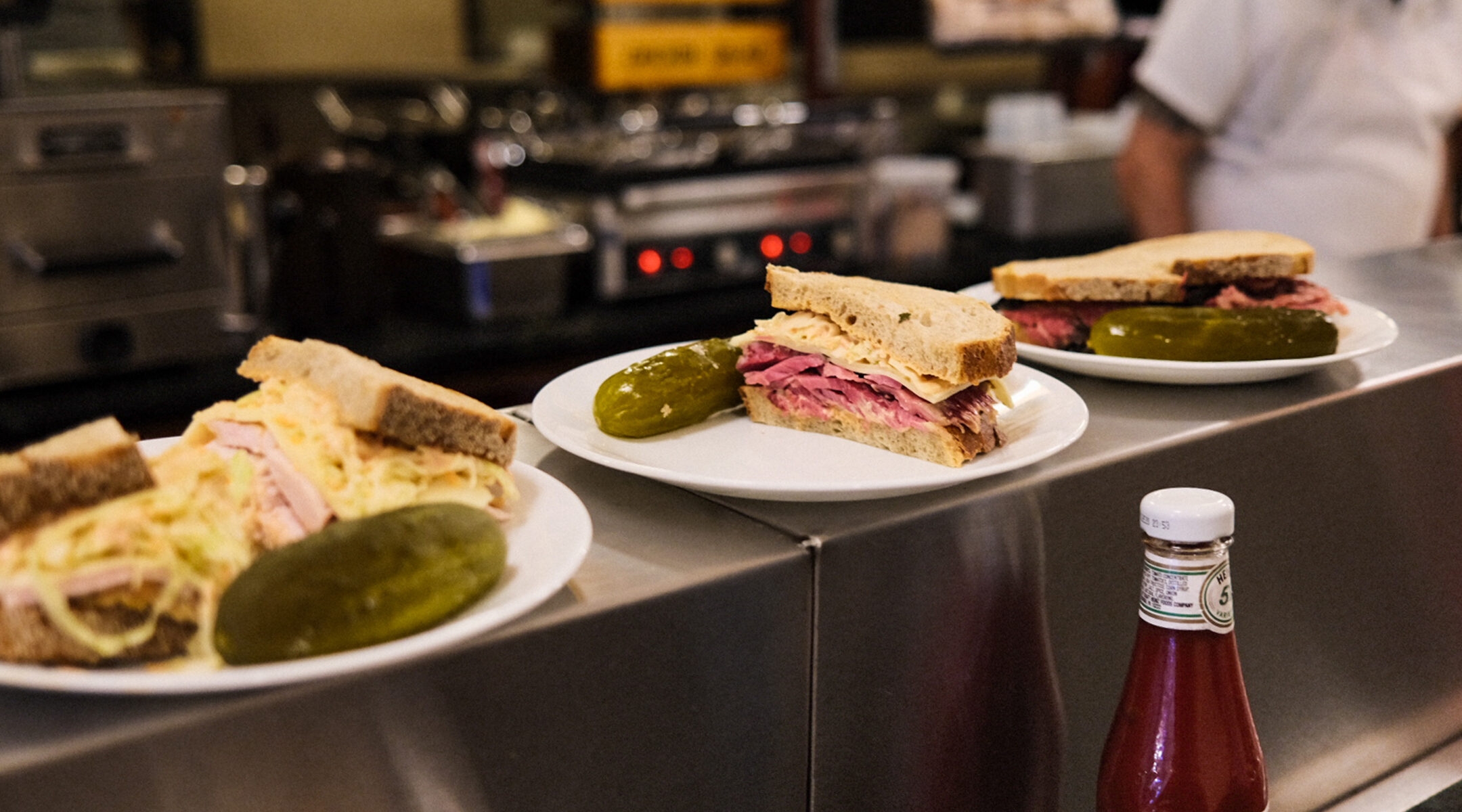 The menu at S&P, a new old-school luncheonette where Eisenberg's Sandwich Shop once was, is filled with Jewish classics — and sandwiches are served with a pickle, naturally. (Courtesy)
Advertisement

(New York Jewish Week) — It’s just after 1 p.m. on an unseasonably warm autumn day, and the line at the recently opened Flatiron restaurant S&P, which describes itself as “a new place for a very old lunch counter,” is out the door.

Fortunately for my rumbling stomach, the crowd is mostly due to the tight quarters within: Many customers are simply waiting for takeout orders of pastrami sandwiches and matzah ball soup. The barstool seating at the vintage marble counter means space near the entrance is at a premium, and my dining companion (none other than Shannon Sarna, the editor of The Nosher) and I are quickly seated at a two-top in the cramped yet convivial rear, which is dominated by a long green banquette.

S&P officially opened Sept. 28, the latest venture from Eric Finkelstein and Matt Ross, the founders of hip local sandwich mini-chain Court Street Grocers. It’s the newest iteration of an old-school luncheonette at 174 Fifth Ave., which first opened in 1928 and had been known for decades as Eisenberg’s Sandwich Shop.

I myself had once been a regular Eisenberg’s customer: At the tail-end of the ’90s, my first “real” job in New York was at the Flatiron Building across the street. To me — and, clearly, to many other New Yorkers — Eisenberg’s was the kind of place that seemed to be entwined with the very fabric of the city, like pigeons, hot dog carts and subway cars. I can’t say the food was particularly good at Eisenberg’s, but washing down a tuna melt with an egg cream in the vintage environs always felt special.

After a series of owners, Eisenberg’s shuttered for good during the pandemic in March 2021. Finkelstein and Ross — who first met as undergraduates at the Rhode Island School of Design, where they graduated in 2003 — were tapped to take over the space this spring, as the building’s landlord was committed to having a tenant who would preserve the vibe (if not the name, due to legal reasons) of Eisenberg’s.

The partners have spiffed up the interior and the menu a tad — but not enough so that the eatery feels unrecognizable. In fact S&P very much feels the same as Eisenberg’s always has, even if the floor is new and dishes such as bananas and sour cream are recent additions. As Finkelstein, 40, who grew up in a Jewish family in Hollis Hills, Queens, told me in a phone interview: “This is the kind of food I grew up around and with.”

In an effort to preserve the space’s long history, the new owners settled on a name that honors the restaurant’s original owners, Charles Schwadron and Rubin Pulver. “You can see that these two guys, Schwadron and Pulver, had built this place out right when the building was erected, and they were going to run a restaurant together,” Finkelstein said, explaining research that included scouring old lawsuits and tax documents. “In a 1940 tax photo, which is how we found out it had been called S&P, you can see five other sandwich shops on the same block.”

Following a hectic weekday lunch rush, I spoke with Finkelstein about the luncheonette’s legacy, its Jewish influences and how to make a perfect egg cream.

New York Jewish Week: Eisenberg’s felt like the kind of place that’s been around forever — and the new S&P still does. The nostalgia is there, but at the same time, the restaurant really feels like a living, breathing part of the city. Is that what you were aiming for?

Eric Finkelstein: This kind of place has always been really important to my business partner, Matt [Ross], and I — and to, obviously, a lot of people in New York. It’s the kind of place that people associate with New York. When you think about the city, you assume that these places are everywhere — and they should be. There are a number of reasons why they aren’t; some of them are organic, and some of them aren’t.

We found ourselves with an opportunity to help the city retain this one. And I think, fundamentally, what we really wanted to do was just make sure that if we were going to do this, that we did it in a way that was honest — where we tried to make the best food that we can, and try to provide the most appropriate level of service that we can, and that it’s not, to use a phrase Matt uses, a “theme-park version.” Because we definitely feel that this kind of thing is timeless, and it’s not, you know, it’s not an exercise in nostalgia to try to keep this place open.

Were you familiar with Eisenberg’s before you opened S&P?

I wasn’t aware of Eisenberg’s as a kid. My father definitely knew of it; my great-grandparents worked in the neighborhood, where there were a ton of places like Eisenberg’s. When we opened Court Street Grocers [in 2010], Matt and I used a number of things as a model for what we wanted to do [and this was one of them]. Like everybody else, I was kind of bummed to see the place had declined so precipitously in those last couple of years, then even more devastated to see it close.

I should say, obviously, that we are not Eisenberg’s. We don’t have the right to use that name. S&P is a different business. But one of the things that I loved so much about Eisenberg’s is that it was a lunch counter, that, you know, there were hundreds, or maybe thousands of lunch counters exactly like it in New York, with the same exact specs for the marble countertop and the mirrored back bar.

There are a lot of traditional Jewish foods on the menu, like latkes and matzah brei, but you also have things like cheeseburgers and bacon. Would you consider S&P a Jewish deli, or do you see it as Jewish in any way?

I would consider it a Jewish luncheonette. I think a deli has counter service, like a deli counter. Maybe a deli food case, and you could order food to go, or you could sit down at a table and maybe get a table service. But I think the lunch counter aspect of it makes it not a deli but a luncheonette.

It’s obviously not kosher. But, you know, I think there’s a tradition of this kind of lunch counter in New York that was Jewish inflected. And even a lot of diners have a lot of traditional Jewish food on their menus, for whatever reason, just because it’s New York.

I read that S&P’s desserts are made by your relatives. I love how this is a family business — a lot of the classic Jewish restaurants in the city, like Katz’s Delicatessen and Russ & Daughters, are generations-old family businesses. Do you feel like you’re recreating some of that, with something new?

My father makes the rugelach and both of Matt’s parents make the carrot cake.

The Court Street Grocers business, we’ve always thought of it as a kind of mom-and-pop-style operation. Decisions are made based on what’s actually happening with interactions between the customers and the staff, versus just kind of coming up with what people call “a concept” and executing it. These places should be living and breathing things that change.

Bonus question: I ordered a tuna melt and an egg cream at S&P, just like I used to at Eisenberg’s. I like egg creams OK but I don’t generally love them. But the one I had at S&P was by far the best egg cream I’ve ever had. What’s your secret?

First of all, we have good seltzer — we made sure that we had a good seltzer system put in, with the right amount of carbon dioxide, pressure, and a way that we can get it cold enough, which is a big deal. We’re using good milk, and we’re using Fox’s U-Bet [chocolate] syrup. So it’s sort of the same ingredients that everybody uses. I don’t know if ours is better, but the order of operations is really important. Before we opened we tried, over and over again, different ways of making it, like you put the chocolate syrup and then the milk. [Or] you put the milk and seltzer and then syrup. We’ve gotten to a place where we’re really satisfied. The amount of syrup is really important —  I think it’s just proportions and order of operations, and then doing your best to try to not beat out all the carbonation.