‘The Gett,’ a play about Jewish divorce, stems from an unlikely marriage between a Brooklyn synagogue and a theater company 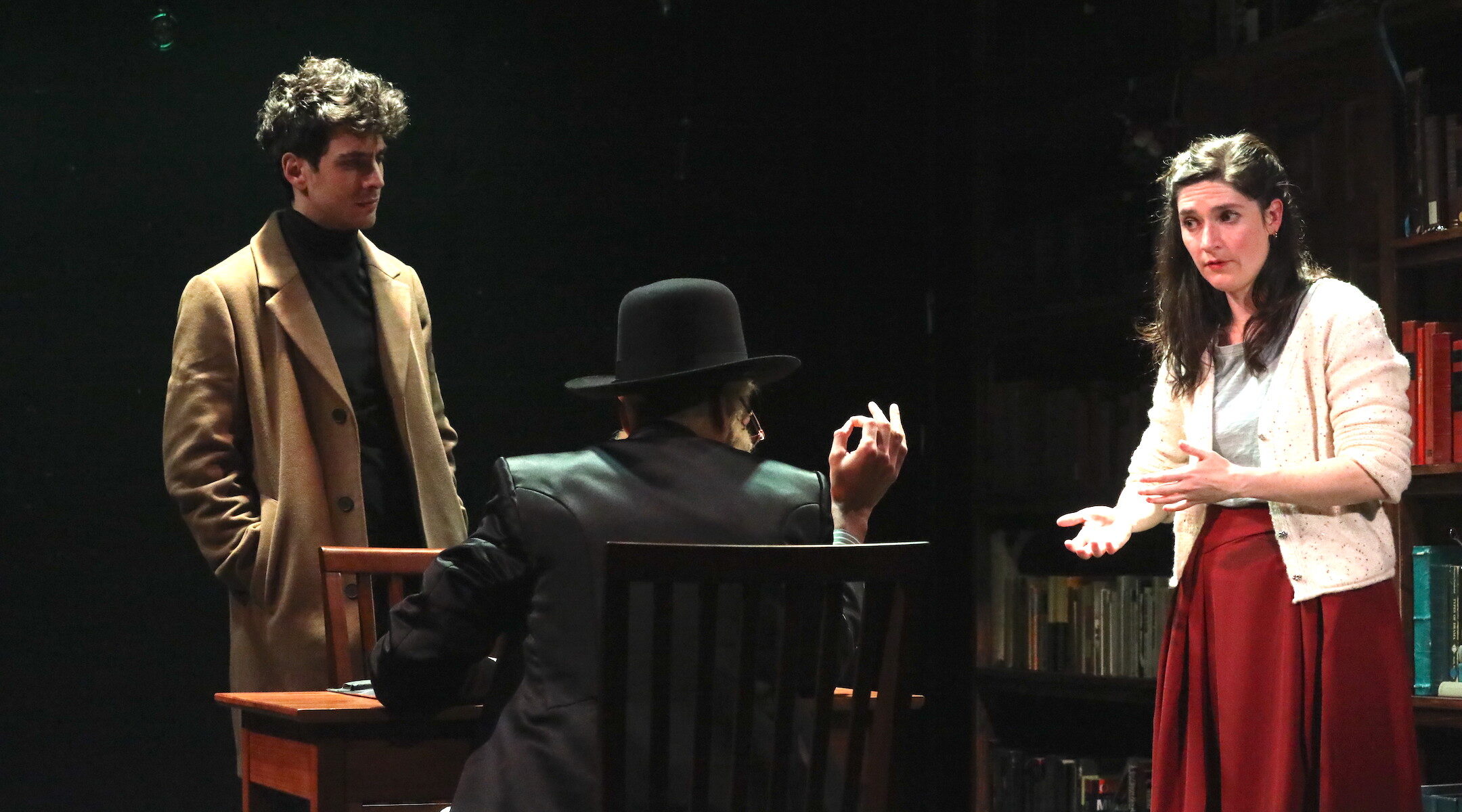 Ben Edelman and Liba Vaynberg play Baal and Ida, a couple in the midst of a divorce in "The Gett" at The Rattlestick Theater. (The Chamber Group)
Advertisement

(New York Jewish Week) — Despite being named for a Jewish bill of divorce, ‘The Gett” is a new off-Broadway play that began as a marriage between a Reform synagogue in Brooklyn and a West Village theater company that specializes in “diverse, challenging and provocative” works.

At Park Slope’s Congregation Beth Elohim, Associate Rabbi Matt Green had been trying to expand programming for “cultural Jews” — those who don’t necessarily feel religious or connected to a denomination, yet know they are Jewish and want to be Jewish.

Meanwhile, at the Rattlestick Theater, artistic director Daniella Topol had just put on a play about the Catholic nuns who started downtown’s St. Vincent’s Hospital in the 19th century, and wanted to direct a play about Judaism for her next project.

When Topol and Green were introduced in 2018 by Rosalee Lovett, who sat on the boards of both institutions, co-commissioning a play seemed like a natural fit — however unconventional.

The result is “The Gett: Or How a Woman Created Herself,” an original play produced by Congregation Beth Elohim and showing at the Rattlestick through Dec. 11. The 95-minute production — written by and starring Liba Vaynberg — centers on Ida, a recent divorceé navigating her relationship with herself, her mother, her ex-husband Baal, Judaism and God. With the plot points structured around the seven days of creation, Ida’s relationship with her Baal (in Hebrew the word can mean “master” or “husband”) is laced with a double meanings. The viewer can see the couple’s sometimes dangerous and sometimes loving relationship as a metaphor for the Jewish people’s relationship with God.

“What’s powerful about this play is that it has been a really community-based development and a really thoughtful development in partnership between a synagogue and a theater,” said Topol, noting that this is the Rattlestick’s first-ever Jewish play, and first partnership with a synagogue.

Despite the biblical trappings in “The Gett” — which also stars Jennifer Westfeldt, Ben Edelman and Luis Vega — the play is funny and modern. “We’ve tried a number of different things, but so far, this is one of our greatest successes to offer content that’s serious for people who call themselves culturally Jewish,” Green told the New York Jewish Week. “It’s really important to me that this play fosters a broader conversation, even in some small way, about what our institutions can be doing differently.”

Performances have been full so far at the 99-seat theater, with CBE encouraging congregants to see the show by offering group trips and programming surrounding the play, including talkbacks with Rabbi Green that explore the Jewish themes in the show. On Friday night performances, CBE holds Kabbalat Shabbat gatherings with the audience before the show. 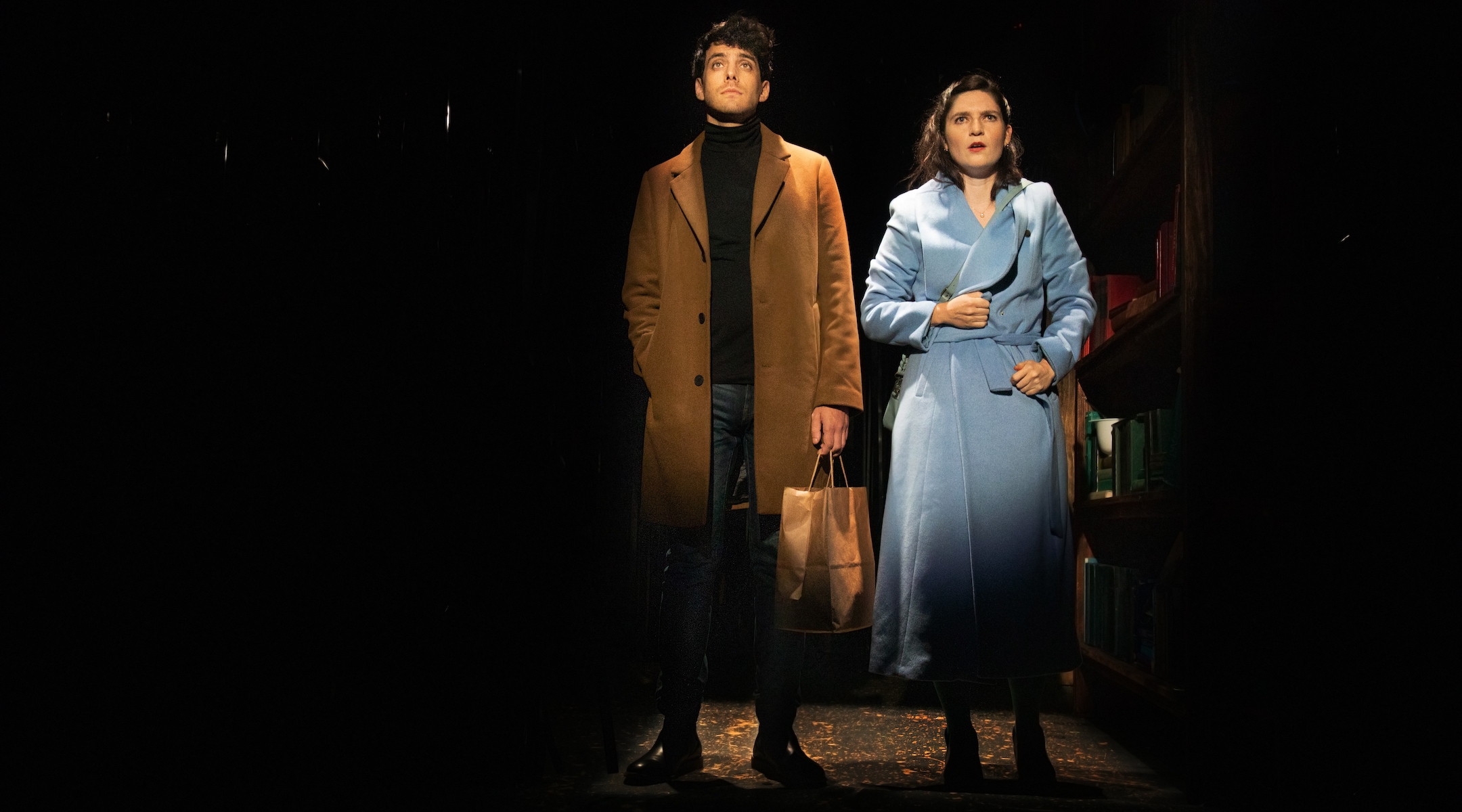 Ben Edelman and Liba Vaynberg in “The Gett.” (The Chamber Group)

“We tend to deride cultural Judaism as if it’s somehow flimsy, or unserious, but if you look at the Pew study, it’s the fastest growing self-identified demographic in our community,” added Green, who also leads Congregation Beth Elohim’s “Brooklyn Jews” cohort, which is a community of younger congregants who are looking to engage Judaism through culture, food and ritual. “Yet we spend very little time as a Jewish establishment trying to really understand what cultural Judaism is.”

Other recent efforts to include these “cultural Jews” include reading and discussion seminars on queer Jewish writers, a meditation group and, perhaps most notably, an “intergenerational mixer” held in partnership with the lifestyle brand “Old Jewish Men of New York,” which got a write-up in the New York Times Styles section.

As for theater, the play really stemmed from CBE and Rattlestick’s desire to work together after realizing their mutual ambitions and interests.

At the Rattlestick, “We really focus as a theater on finding ways to look at stories that deal with the complexity of our culture,” Topol said. “I had been thinking for a while that we wanted to do something that related to the complexity of the American Jewish experience.”

It was something the theater community clearly was interested in as well: When Topol and Green opened a call for submissions, they received over 100. Vaynberg’s play was selected in early 2020.

For Topol, who is Jewish but always saw her Judaism as separate from her directing career, it was a theme close to her heart. “In terms of what Jewish stories are represented on the stage, it feels like there’s some room to really explore some of those key questions that American Jews are wrestling with: identity, intermarriage, having children, ritual, how much do you carry on ritual or not, what your affiliation is or isn’t with Israel, with the Holocaust, with politics,” she said.

“It’s a swirl of all of those sorts of questions that felt kind of worth some creative expression in terms of the theater,” Topol added. (As it happens, “The Gett” will be the last play Topol directs in her six-year career with the Rattlestick — next, she will switch careers and study to become a nurse.)

Once Vaynberg’s play was selected in early 2020, the playwright unexpectedly had extra time to finesse the show. Due to the COVID-19 pandemic, the Rattlestick closed temporarily and put the production on pause.

Vaynberg used the extra time to increase community involvement. She spoke with several women who are synagogue members who had gone through a divorce. She and Green conducted several roundtable discussions and focus groups to further explore congregants’ Jewish identities and how it has manifested in their relationships.

Vaynberg and Green created a “chavrusa,” a study partnership, to explore biblical and religious implications of the questions she had about creation, Jewish marriage and divorce and how much power a person has in their relationship with God.

Some themes in the play probe the same questions about cultural Judaism that Green had been asking at CBE. Protagonist Ida, for example, deeply cares about her Judaism and Jewish identity, and yet has trouble explaining just why and how it’s so important to her on a date with a non-Jewish man.

“By going to this play, you are engaging with Judaism,” Green said. “It’s not just about inspiring people to be involved with Judaism, but actually, it is a Jewish act to see this play.”