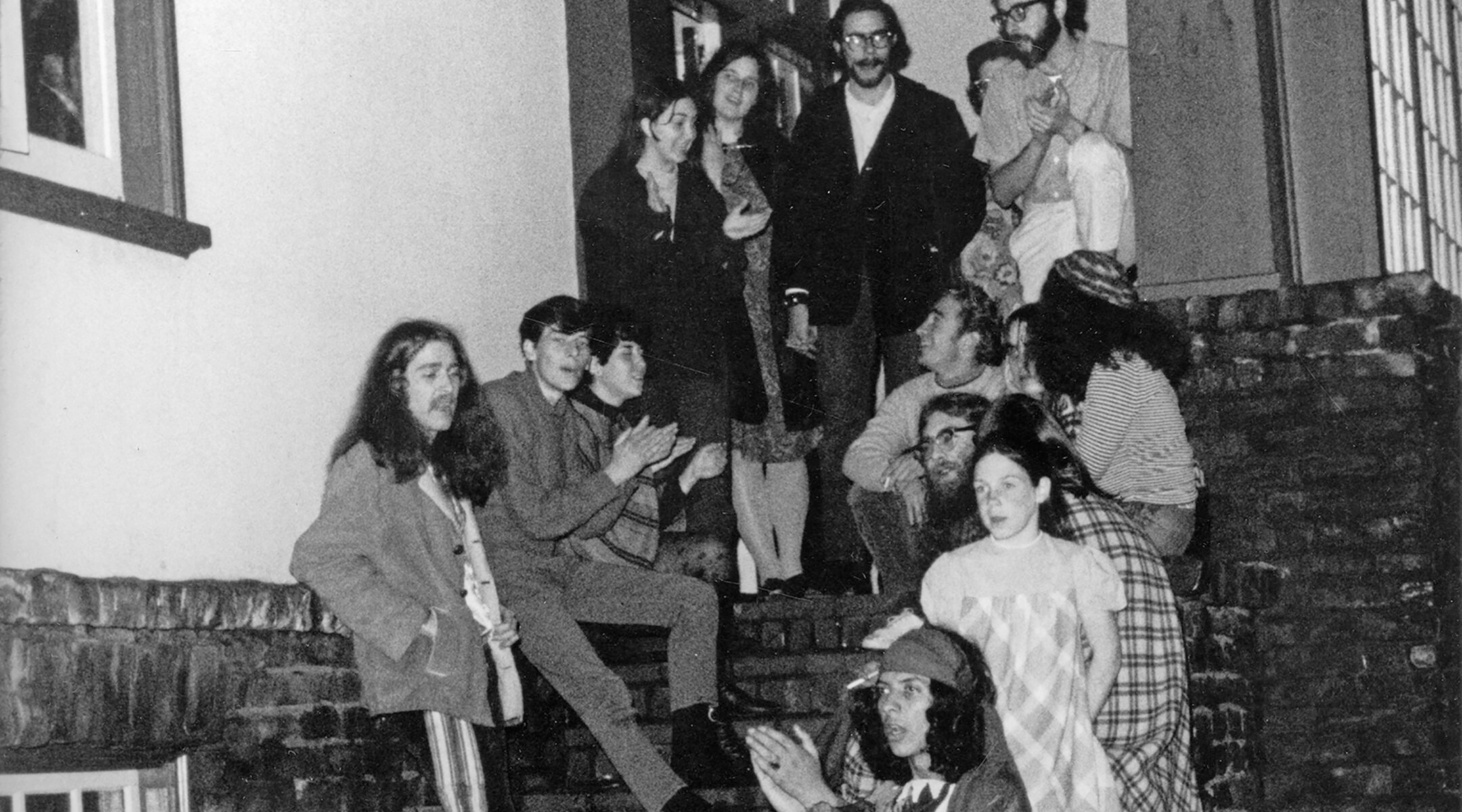 On the front steps of the original House of Love and Prayer at 347 Arguello Blvd., CA 1969. (Marvin Kussoy- Courtesy Yehudit and Reuven Goldfarb)
Advertisement

(J. The Jewish News of Northern California via JTA) — The year was 1968. Young people from around the country were descending on San Francisco looking for ways to express themselves, making efforts — sometimes heroic, sometimes tragic — to free themselves from the bonds of American society.

At the same time, a group of Jews came together in the city to create something new.

“After painfully realizing that the Jewish leaders and especially, in San Francisco, are only interested in lectures on the terrible lost generation, but have no wish of giving them a helping hand, we opened, on our own, a house of love and prayer in San Francisco.”

Those words, by Rabbi Shlomo Carlebach, are on a handmade brochure from 1968. It’s only one artifact in a treasure trove of documents and photos displayed in a new, online exhibit out of the University of San Francisco called “Mapping Jewish San Francisco.” Much of the historical material is being seen publicly for the first time.

“We really want people to get a sense of the unique elements of Bay Area Jewish life,” said Oren Kroll-Zeldin, lead curator of the project and assistant director of the Swig Program in Jewish Studies and Social Justice at the university. 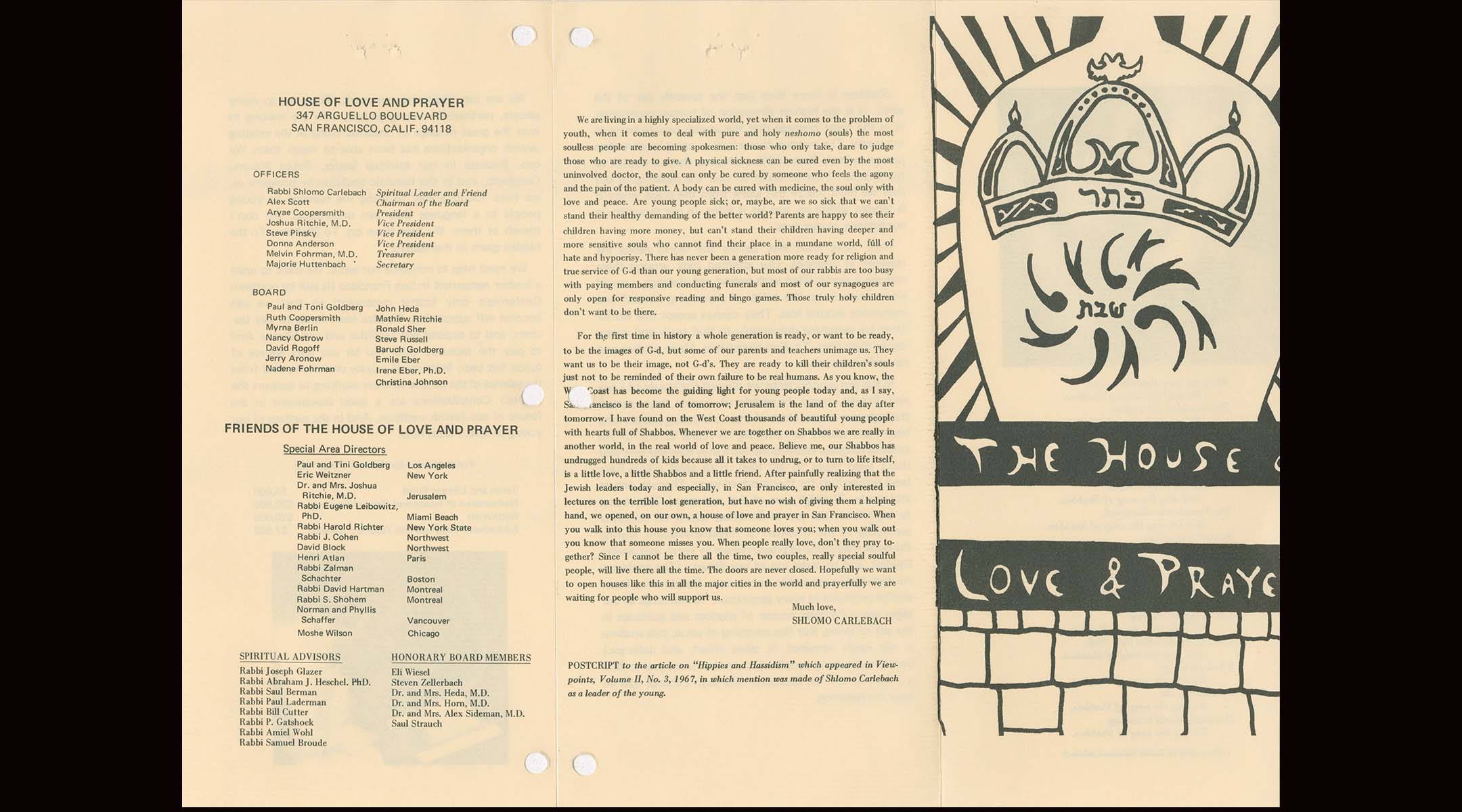 The first part of a brochure advertising the House of Love and Prayer, 1968. (Mapping Jewish San Francisco)

The San Francisco project was inspired by “Mapping Jewish Los Angeles,” a UCLA endeavor that for more than a decade has been bringing multimedia stories of L.A.’s diverse Jewish neighborhoods to life.

“I thought, oh my goodness, we need to do this about San Francisco!” Kroll-Zeldin said.

“He was immediately excited and supportive of it,” Kroll-Zeldin said.

They got to work, but executing the projects was a bit more daunting than expected, including making sure the multimedia elements of the website worked perfectly.

But now the site has launched with two inaugural exhibits: Kroll-Zeldin’s deep dive into Carlebach’s synagogue and religious commune known as the House of Love and Prayer, and a comprehensive look at the Karaite Jewish community in the Bay Area and beyond.

“Through ‘Mapping Jewish San Francisco,’ we aim for people to better understand how today’s Bay Area Jewish community came to be and the role that Jews have played in the creation of this major American city,” Hahn Tapper said in an email.

Kroll-Zeldin said a key factor in the effort was the access he had to personal papers, stories, photos and anecdotes, provided to him by the people who were there. He calls it “one-of-a-kind archival material.”

“This is only possible based on the willingness of these people to tell these stories,” he said.

There are also videos, including a series of oral histories with locals who experienced communal living, and archival audio recordings of Carlebach’s teachings and music. The exhibit covers the reach of the rabbi’s impact, but also touches on the controversies around Carlebach, who was accused of sexual assault by many women.

The second exhibition, led by Hahn Tapper, highlights the history of the Karaite Jews, a small but distinct and vibrant community of Jews who are the inheritors of a little-known branch of Judaism. 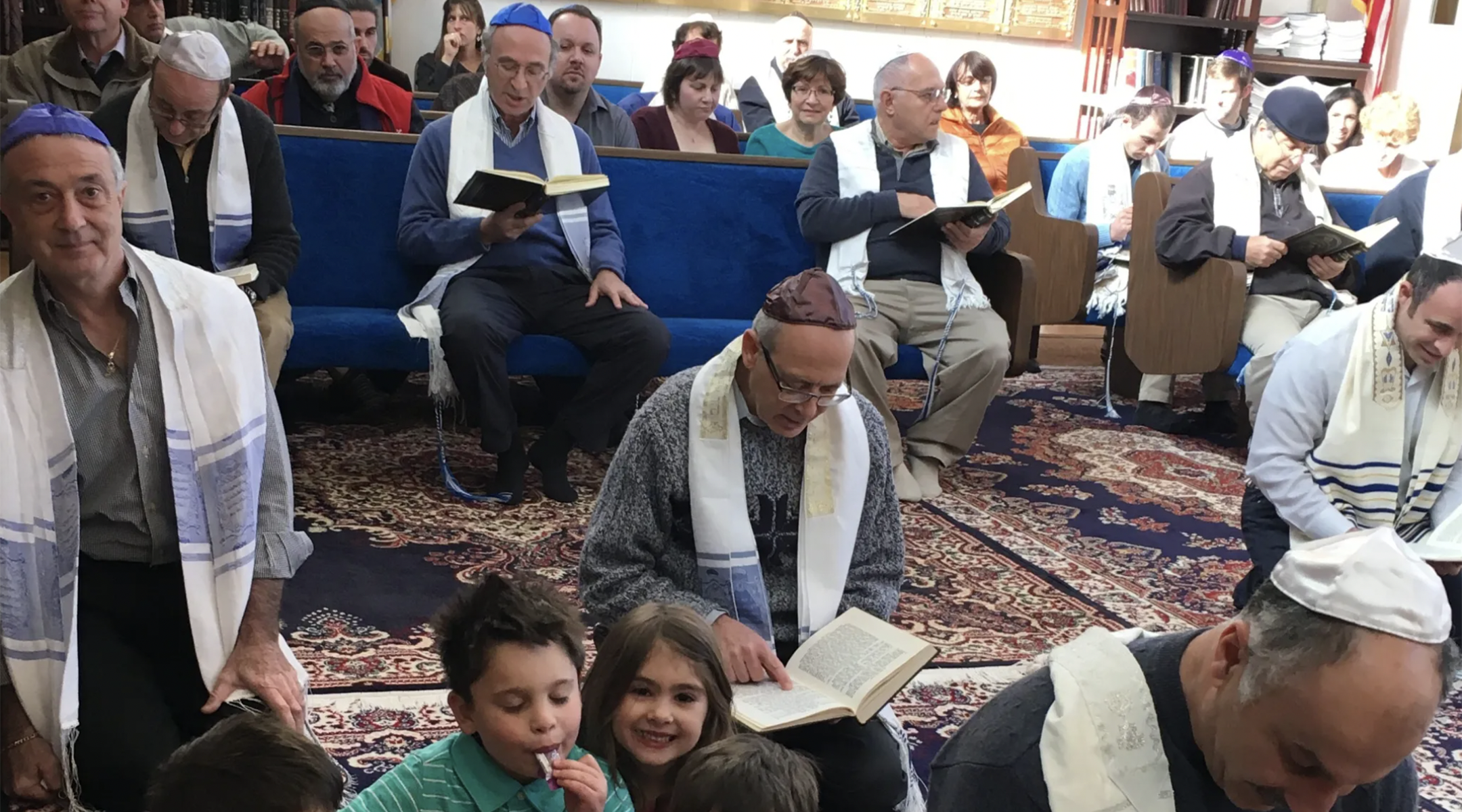 It is a custom among Karaite Jews to pray kneeling on the ground, as seen here in the sanctuary of Congregation B’nai Israel in Daly City. (Courtesy Kararite Jews of America)

They split from the mainstream, theologically, somewhere between the eighth and 10th centuries. While they follow Torah, they do not follow the rabbinic interpretations in the Mishnah and Talmud. Karaite Jews have many customs and prayers that set their religious practice apart.

The largest group of Karaites lived in Egypt until the 1950s, when tensions, violence and war drove many of them out. Some moved to Israel and others to the Bay Area, where they built a tight-knit and active community.

Only 50,000 or so Karaites are left in the world today, with an estimated 1,000 in the Bay Area, site of the only Karaite synagogue in the Western Hemisphere.

“They are a very important subcommunity of Jews,” Hahn Tapper said. “In addition, as a religious studies scholar who focuses on contemporary social identities, the ways this Jewish community has re-established itself here in the Bay Area is astounding.”

Hahn Tapper said he went through mounds of documents and hundreds of hours of video interview footage to put together the online exhibition, called “Out of Egypt.” He said the videos are invaluable because so many of the Karaites who immigrated to the United States have died in recent years.

“Through this exhibit we have documented their lives, lives of Jews in Egypt that no longer exist,” he said. “These interviewees paint a picture of what it was like to celebrate Jewish holidays in Cairo, some of whom did so with their Muslim neighbors.”

Kroll-Zeldin said each exhibit takes up to two years to prepare, in collaboration with academics, students and community leaders; scholars first collect and digitize the material, then do the research, writing and bibliography work.

The next project is being led by Rabbi Camille Angel, USF’s rabbi in residence, who is working with her students to collect stories of Jewish LGBTQ life in San Francisco. Their research and findings will help tell that chapter of Bay Area Jewish history, a form of storytelling that will continue to be central to the project as it unfolds.

“People like stories,” Kroll-Zeldin said. “Stories connect people. And there are so many interesting stories to tell.”

A version of this piece originally ran in J. The Jewish News of Northern California, and is reprinted with permission.