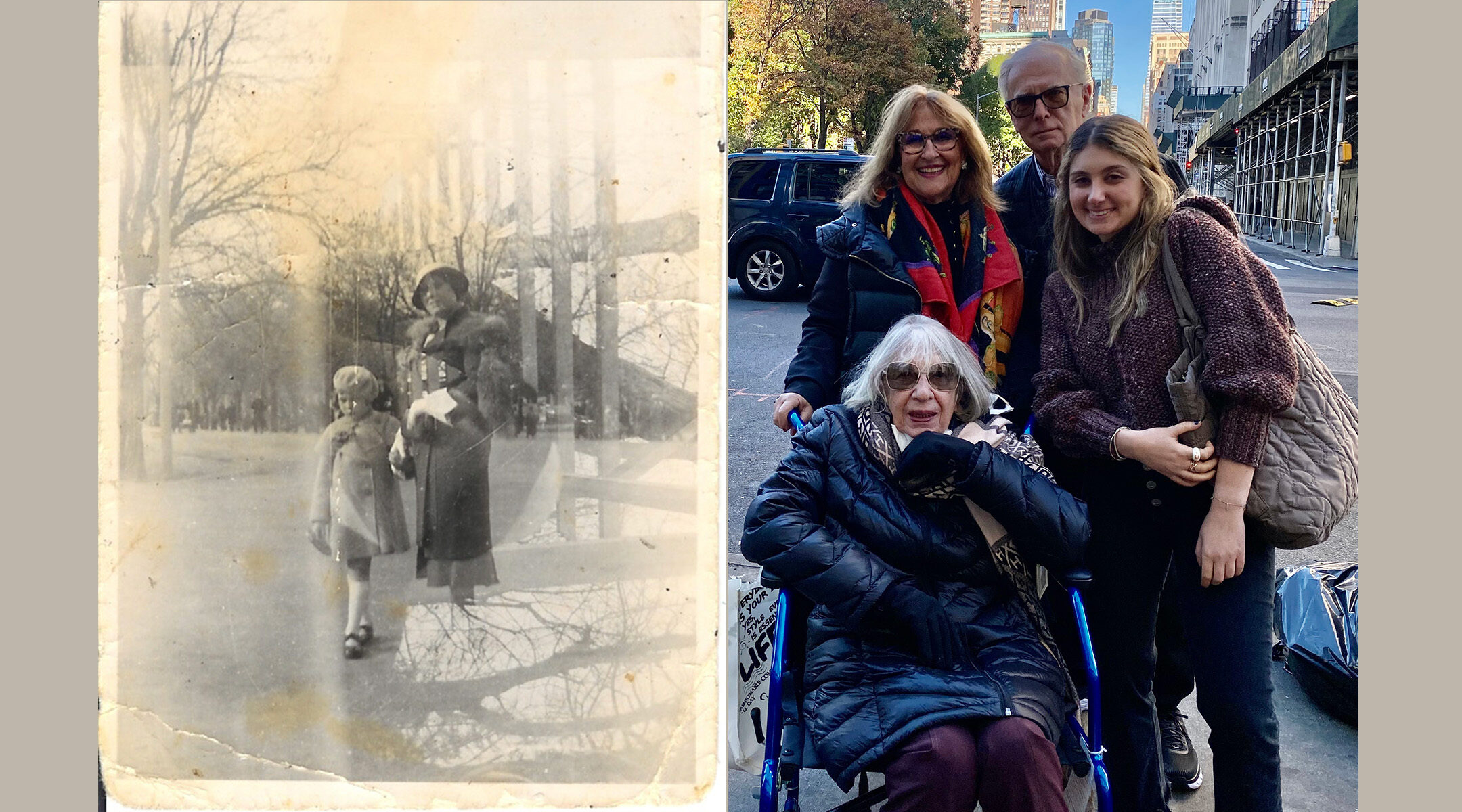 Left: Fini Konstat and her mother, Anny Vogel, in Vienna in the 1930s. Right: Fini, bottom left, with her daughter, son-in-law and great-granddaugther on their recent trip to New York City. (Courtesy)
Advertisement

(New York Jewish Week) — On a Wednesday evening last month, three generations of a Jewish family made their way to their seats at the Longacre Theater to see “Leopoldstadt,” Tom Stoppard’s epic Broadway play about the tragedies that befall an extended Jewish family in the first half of the 20th century in Vienna.

The date of the family gathering was a significant one: Nov. 9, the 84th anniversary of the Nazi pogroms known as Kristallnacht. And in the audience was Fini Konstat, 95, who lived in the once thriving Jewish neighborhood after which the play is named, and witnessed the horrors it portrays first-hand. Alongside her were her daughter and her son-in-law, Renee and James Akers, and her oldest great-grandchild, Lexi Levin, 23.

When Konstat was a child, she lived in a “nice apartment” in Leopoldstadt. But exactly 84 years to the day of their theater date, “I was running with my father, seeing all the Jewish stores with all their windows broken,” she told Levin in a short video her great-granddaughter filmed before the curtain rose.

“It’s such a blessing for me to be here with you,” Levin said to her great-grandmother in response. “Ninety-five years old, survived the Holocaust and a pandemic, at a Broadway show in New York City.” 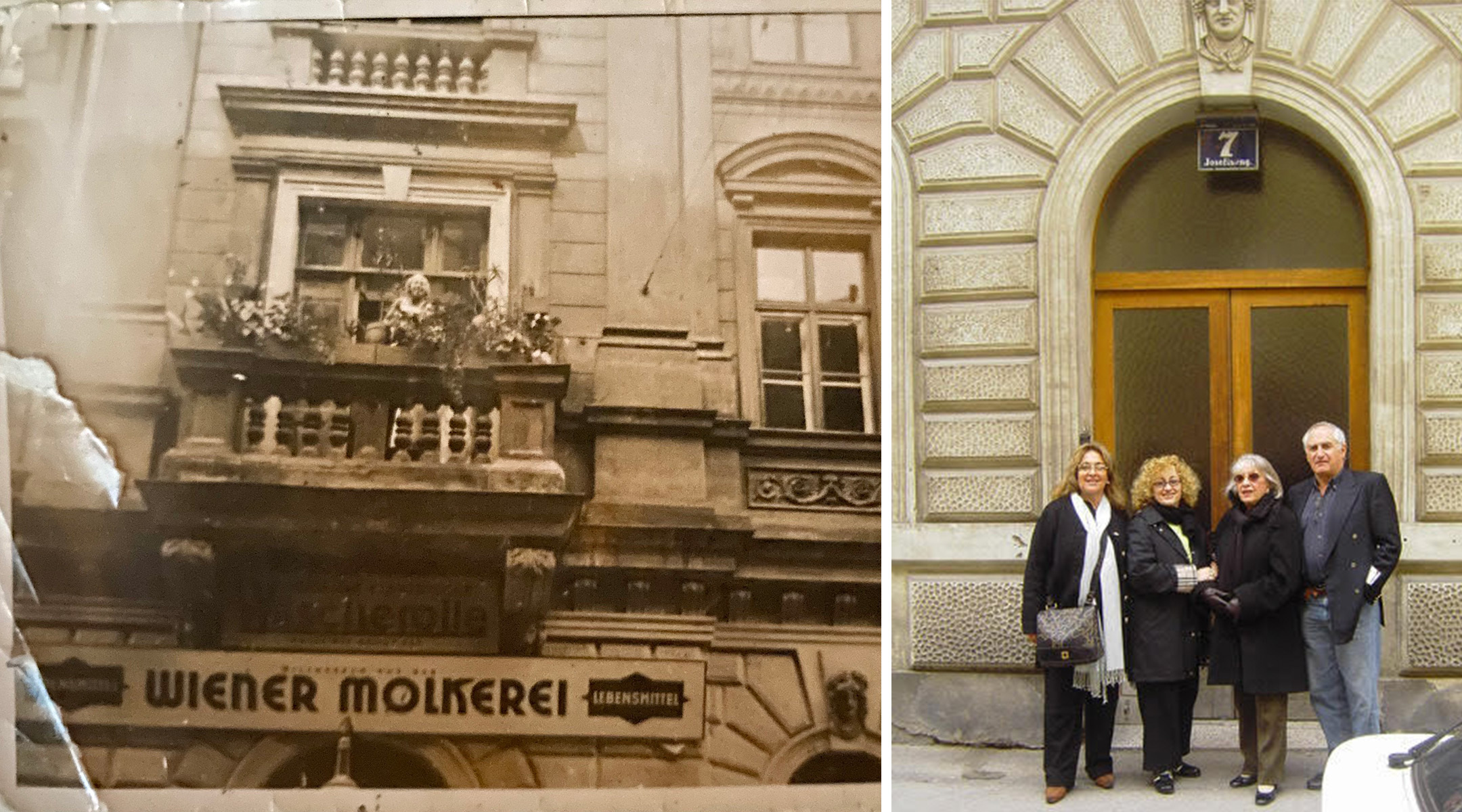 Left: Fini as a child on the balcony of her apartment in Leopoldstadt. Right: Fini with her three children in front of the very same building, pictured in 2015. (Courtesy)

Since the beginning of its Broadway run in mid-September, “Leopoldstadt,” with its depiction of a prosperous Viennese family on the brink of destruction, has moved audiences to tears and inspired deep reflections on the Holocaust. Based on the celebrated playwright’s own family history — of which he was barely aware while growing up in England — it has provided a stark counterpoint to news about rising antisemitism and the celebrities who have been purveying it.

But for Konstat, the play was much more personal. “When I heard the word ‘Leopoldstadt,’ this alone gave me lots of thrills and memories,” Konstat, who is known in her family as Mimi, told the New York Jewish Week in accented English. She recalled how Levin, who recently moved to the city, invited her to fly to New York to see one of Broadway’s hottest tickets.

“Leopoldstadt,” she repeated, her voice breaking. “The second district. That’s where we lived.”

At the end of Stoppard’s five-act play, audiences learn that most of the Jewish characters had perished under the Nazis — of the four generations in the show, just three cousins survive to carry on the family’s legacy.

For Konstat too, she and her parents were among the very few in their extended family to survive the Holocaust. “Almost all of them went to Auschwitz or other camps,” Konstat said. “My mother was a twin and only the twins remained alive. [My mother’s] five other siblings and my grandmother perished.” 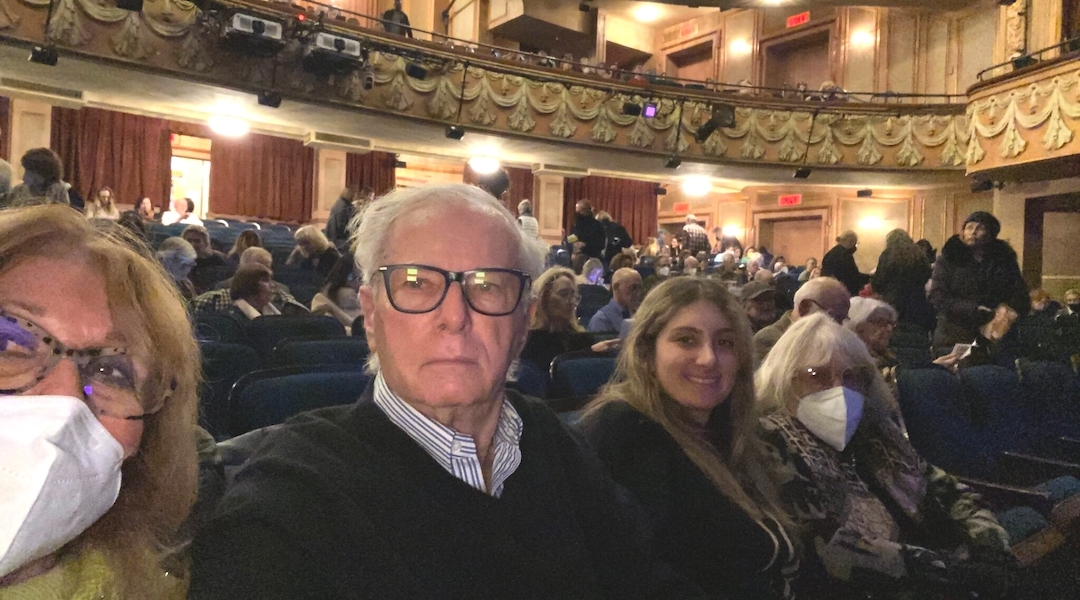 In a Zoom conversation held over Thanksgiving weekend, Konstat, surrounded by two of her daughters, two of her granddaughters and three of her great-granddaughters, shared what the play meant to her — and how her family has restored what she lost.

In the months after Kristallnacht in 1938, Konstat and her parents hid in a neighbor’s apartment; Konstat recalls hiding under the duvet when German soldiers showed up. Eventually the family fled to Turkey, and then to India, before settling down in Mexico City. There, the teenage Fini met her husband David, also a survivor who escaped Poland. The two of them began to write the rest of their story — starting with the birth of the first of their three children in 1948.

Unlike many Holocaust survivors, Fini and David Konstat were open about their experiences during the war, instilling a sense of pride and duty to remember in their children — something that eventually extended to their grandchildren and great-grandchildren.

“They were proud to speak about how they survived this,” said the Konstats’ middle child, Renee Konstat Akers. “Their life was an odyssey. They had the courage to do things that you would never think were possible. We grew up grateful knowing how our family survived in that incredible way.”

Each child moved to different places as they grew up and got married. Manuel, the oldest, stayed in Mexico. Renee married an American and moved to the Midwest, and Denise, the youngest, to Houston. Each became deeply involved in their Jewish communities, sending their children (Konstat’s grandchildren) to Jewish day schools, celebrating Jewish holidays and participating in synagogue life.

“The word ‘miracle’ really does not feel like an understatement in this scenario,” said Sherry Levin, one of Konstat’s grandchildren. “When we think about what it took for my grandmother and grandfather to survive and how they were able to intersect in Mexico, and such an amazing multi-generational family has come to fruition, it feels miraculous.” 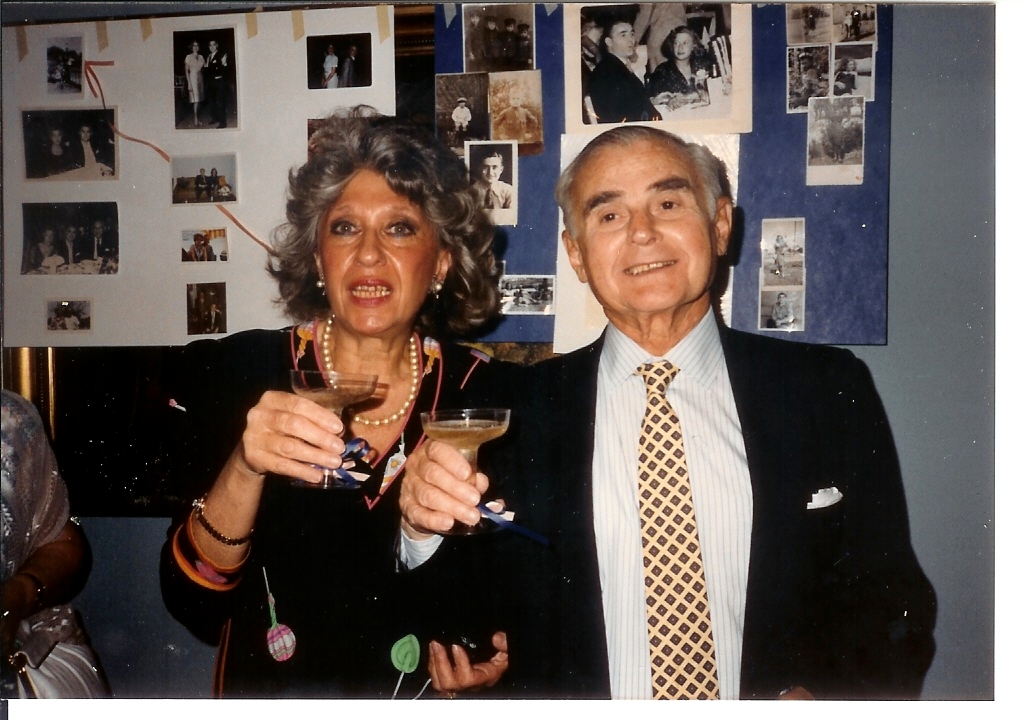 Pictured here on their 40th anniversary, Fini and her husband David met in Mexico City after both had fled Europe. They were married 54 years before David died in 2001. (Courtesy)

Reviews of the show have ranged from rhapsodic to resistant, with some critics suggesting the play is simplistic and obvious in its story-telling or that it is less a well-crafted play than a well-meaning lesson on the Holocaust.

But just as the Merz family clashes and argues about everything from antisemitism to intermarriage to socialism in “Leopoldstadt,” each generation of the Konstat family that saw “Leopoldstadt” that night came away with something different —  a reaction influenced by their age, their Jewish identity, their nationality and their relationship with their family.

For Konstat, the arc of “Leopoldstadt” was so familiar that it hardly stirred her. “It was just very happy watching it and enjoying it and enjoying my children with me, “ she told the New York Jewish Week. “I didn’t think about anybody else.”

Akers, too, felt an intense familiarity with the story, and, perhaps toughened by her own family history, didn’t experience an intense emotional reaction. Her own parents’ lives gave Akers a sense of purpose in her life — for example, in the 1990s, she was passionate about helping resettle Jews fleeing the former Soviet Union. With her own children, she instilled in them a strong sense of Jewish purpose in their work, their education and their family.

“I was a sandwich in between seeing my mother and my granddaughter,” she said of her “Leopoldstadt” experience. “I was emotional thinking of my mom who went through it, but I was more emotional about seeing my granddaughter be so moved. It really hit her at her core.”

Indeed, it was the youngest member of the family present that night who was most shaken by the play.

“It really felt like a gift to my family and to me, specifically, to be able to see what Mimi’s life looked like before the war,” Lexi Levin said, surmising that, as a fourth-generation survivor, she is among the first in her family to be able to start processing the loss on a grander scale.

“For the first time in my life, I really felt the magnitude of her loss,” she added. “I’ve known her story and I’ve been inspired by her story to be involved with my own Jewish causes, but I have never been able to access and truly empathize with her grief and what it meant that she lost the entire family she had before this one that she created.”

Turning to her great-grandmother, as if trying to make her understand the exact precision of the show, Levin explained, “It’s a play about generations and the family was large and then it was small.”

“You made it large again,” she said, referring to the generations of family that had assembled — in the Broadway theater and again over Thanksgiving weekend. “Look at this room.” 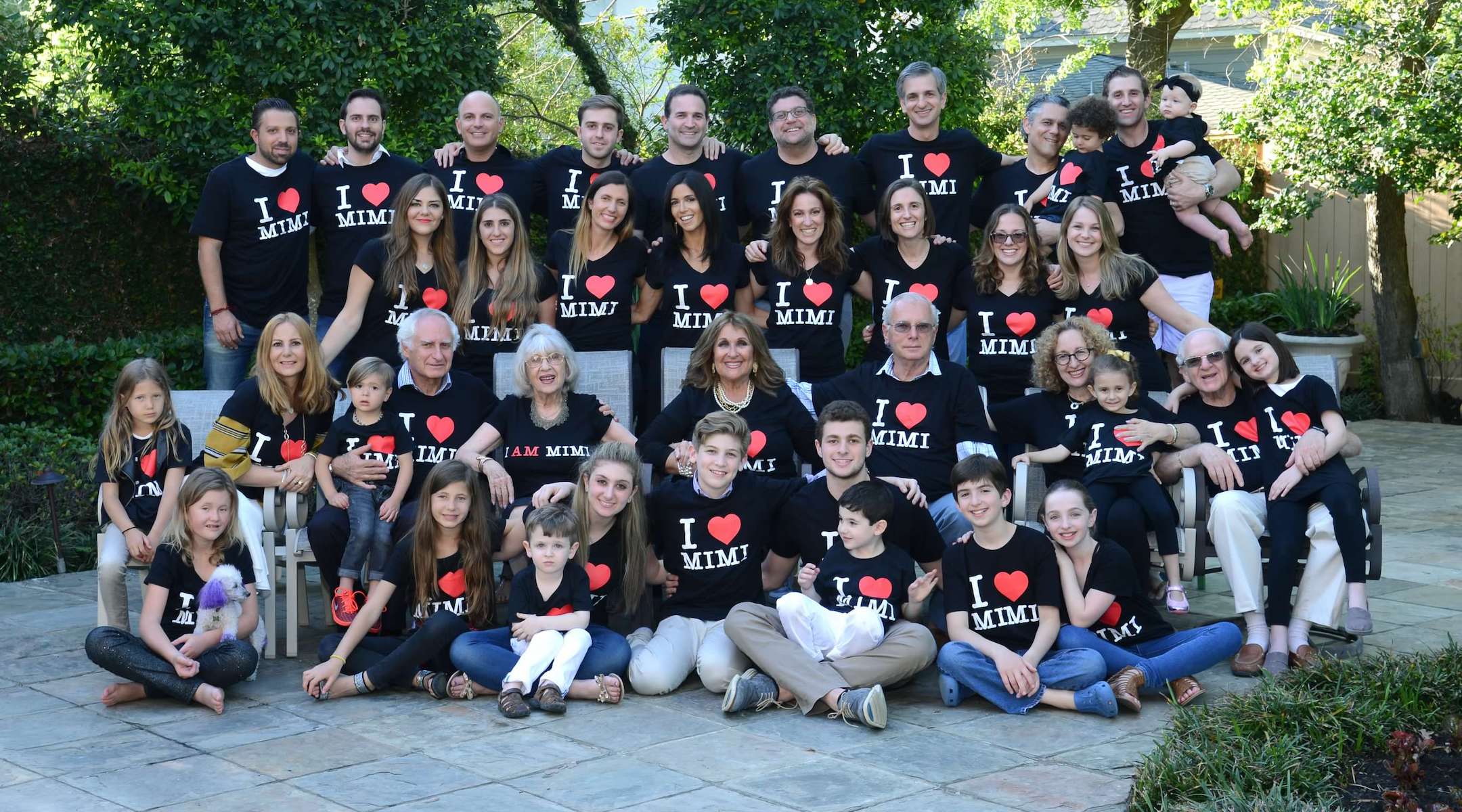 There was a coda for the family after the curtain went down. The day after the show, the family wanted to see the 1907 “Portrait of Adele Bloch-Bauer I,” one of Gustav Klimt’s most famous paintings, which currently hangs at the Neue Galerie on the Upper East Side. A version of the portrait’s true story — how a painting of a socialite from a prominent Viennese Jewish family was looted by the Nazis and the family’s efforts to get it back — features in the plot of “Leopoldstadt.”

The gallery, however, was closed on the only day the family could visit. After a call to the management at the gallery, which showcases the German and Austrian art collections of  Jewish philanthropist Ronald S. Lauder, the gallery’s director arranged a private tour.

“It felt like we were in a puzzle and everything was finally coming together,” said Akers. “It was an emotional, emotional time.”

When the week was over and the emotions were spent, Konstat and the Akers returned home with a reignited passion for their family story. But there was yet another twist: In addition to the whirlwind trip Levin planned for her grandparents and for Mimi, she had been undergoing the laborious process of applying for Austrian citizenship. Six members in Konstat’s large family have undertaken the process over the last two years.

“Part of the motivation was knowing Mimi’s story, and knowing that she survived because her mother had citizenship in Turkey,” Levin said. “That story was just inspirational to me, knowing that dual citizenship was what saved our family.” She convinced her brother and mother to apply for Austrian citizenship as well.

The day after her grandmother and great-grandmother left New York, Levin called them with news from her small apartment in Manhattan: An Austrian passport had arrived in the mail. The curtain was rising on another act.

Konstat was surprised at how interested her family was in getting Austrian citizenship. “I feel very good,” she said. “I’m very happy.”

“Does it make you emotional?” Levin asked her during the Zoom call with the New York Jewish Week.

“It does — of course it does. I used to love Austria,” she said. “I was sad to leave. I was disappointed. We never thought of coming back. I was happy to be able to escape. Thank God we made it out of hell.”