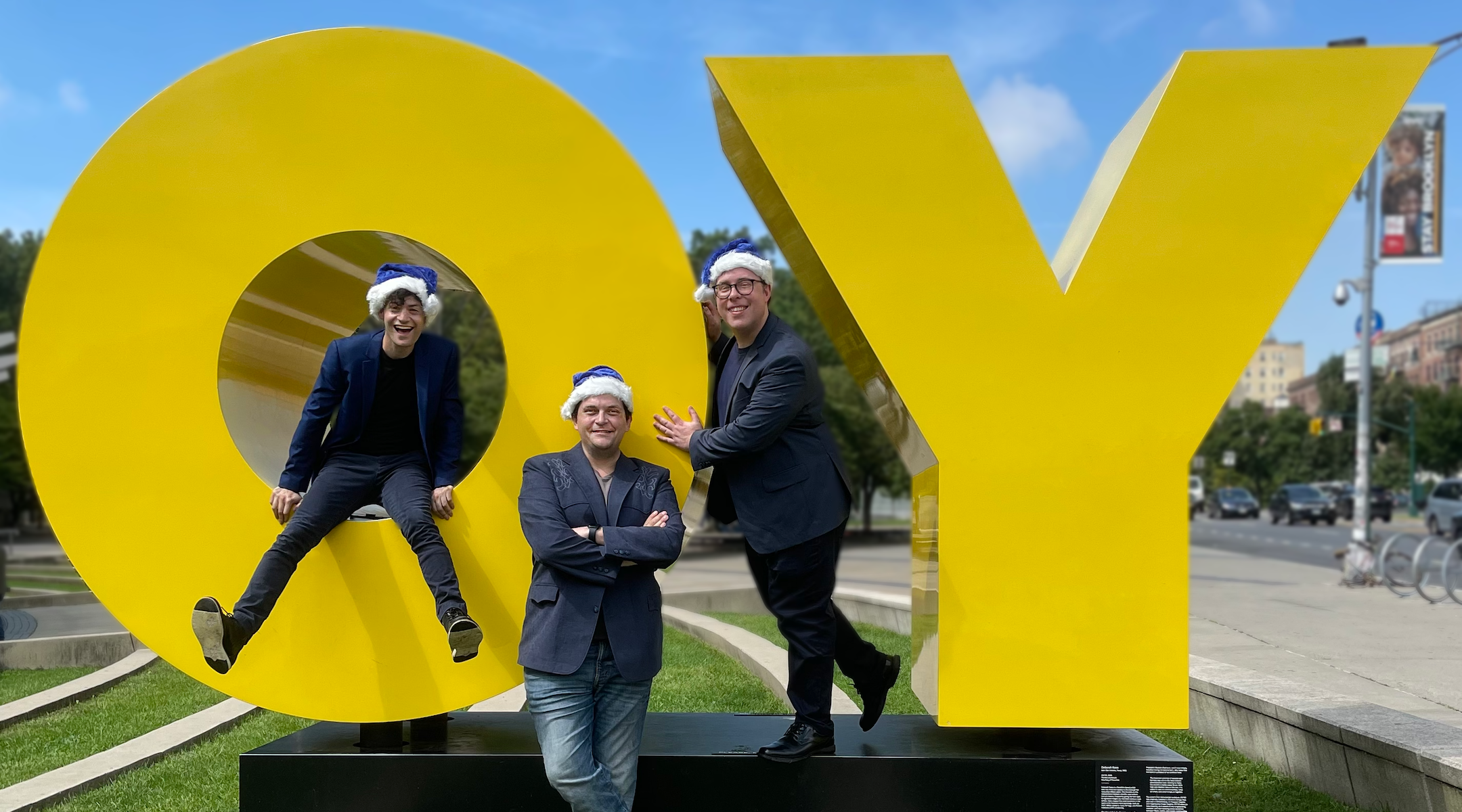 Harrison Bryan, Rob Berliner and Aaron Kenny created "A Hanukkah Carol, or GELT TRIP! The Musical" as a Jewish answer to the inundation of Christmas entertainment in December. (Courtesy)
Advertisement

(New York Jewish Week) — A selfish social media influencer, an all-knowing benevolent spirit known as “The Hanukkah Fairy,” and a good-natured cockney orphan right out of Charles Dickens’ “A Christmas Carol” may seem like they all come from different worlds, but each appears as a character in “A Hanukkah Carol, or GELT TRIP! The Musical” — a show its creators hope will become a winter tradition for years to come.

For co-creators Harrison Bryan, Rob Berliner and Aaron Kenny, the lighthearted “A Hanukkah Carol” is their answer to the inundation of Christmas material and cheer throughout December.

“There is a plethora of Christmas entertainment options that we get every holiday season, especially in New York City,” said Jewish actor and playwright Bryan, a native of Brooklyn. “For me, growing up, there was a sense that Hanukkah is the second-place holiday.”

His new musical, however, “feels like this is an opportunity to join the party in a way that feels authentic,” he said. “It’s just allowing the season to feel more inclusive in a city that prides itself on being a melting pot.”

The plot of “A Hanukkah Carol” centers around Chava Kanipshin, a cruel and manipulative social media influencer who hides her Jewish identity because she was bullied as a child. But on one memorable Hanukkah, Chava is visited by spirits of the past, present and future to reckon with her life’s work — namely, her pursuit of internet fame by posting mean and embarrassing videos of her friends and family — before it is too late.

It’s a very obvious Jewish take on Dickens’ 1843 novella “A Christmas Carol” — which has already been adapted into various plays, movies and more in what feels like a thousand times over. (Did anyone else suffer through the 2009 Matthew McConaughey flick “Ghosts of Girlfriends Past”?) But to remake this classic in a Jewish way feels refreshing, adding new depth by exploring themes of Jewish pride, tradition, family and tikkun olam. After all, what is “A Christmas Carol” if not a guilt trip (or, erm, a “gelt trip”) — that stereotypical purview of Jewish mothers everywhere?

Bryan claims the show is “authentically Jewish, but not exclusively,” meaning he and partners want their version of “A Christmas Carol” to be something Jews can participate in and love for themselves. At the same time, however, due to the musical’s inclusive and heartwarming holiday message, it can be appreciated by anyone.

“There’s no Hanukkah classic yet — there’s not a Hanukkah film or show that people go to see as a matter of tradition,” lyricist and co-book writer Berliner told the New York Jewish Week. “We have the opportunity to take our decades of Jewish life and pop culture and comedic sensibilities and love of musical theater and sense of what’s commercial and merge it all together and see how we could present something that even non-Jewish friends would love.”

Perhaps unexpectedly, the show is rife with references to “Fiddler on the Roof,” both implicitly and explicitly. For example, main character Chava, the Scrooge-like social media maven, has nearly lost her parents’ goodwill due to continually blowing them off for holidays and acting superior to them. When Chava has a visit from the ghost of Hanukkah future, she hears her father say: “She’s dead to us.” This, of course, is a callback to “Fiddler,” — protagonist Tevye says something similar when his third daughter. also named Chava, marries a non-Jew.

The creators of “A Hanukkah Carol” see their musical as “in conversation” with the classic Jewish musical. “There are no smartphones in Anatevka, but exploring what it means to be Jewish — both in a contemporary moment and looking backwards and forwards — is a core part of ‘Fiddler,’” Berliner said. “It asks, ‘what is tradition and how can we change with the times?’ Oddly, the framework of ‘A Christmas Carol’ is perfectly aligned with that.”

The show, which had an “industry reading” at a Midtown rehearsal studio on Tuesday, has been a long time coming — the trio has been working on it since 2018, all while juggling day jobs and navigating a hiatus during the worst months of the Covid-19 pandemic in 2020.

Kenny, a composer, and Berliner, a lyricist, met as songwriters through the BMI Lehman Engel Musical Theatre Workshop, which is considered a “top training ground” for up-and-coming theater artists. The two loved working together, and wanted to find a playwright to collaborate with. Kenny, an Australian — whom the group calls their “token goy” — reached out to Bryan, whom he had worked with on his masters thesis film at NYU. Bryan immediately sent over 20 short plays he had written — “A Hanukkah Carol” rose to the top.

Berliner, who is Jewish and grew up in Westchester, was sold immediately on Bryan’s “A Hanukkah Carol” script. “The reaction that I had is the reaction that we’ve experienced a lot of folks have when we tell them the title of our show, which is, ‘how does this not exist yet?’” he said. “I would have been drawn to it at any point in my life. I certainly was in this moment.”

After working together on the script and songs, the trio put out an animated “proof of concept” trailer in early 2022. When they saw how much interest the trailer garnered, they opened up a crowdfunding campaign that raised over $33,000 in a month — which will allow them to stage a one-night-only condensed concert performance of the show’s songs at The Green Room 42 (570 10th Ave.) on Sunday, Dec. 18, the first night of Hanukkah. The concert will also be livestreamed.

Meanwhile, Bryan, Berliner and Kenny are in the process of searching for a producer — whether that be for Broadway, off-Broadway or an animated or live-action movie. During the Dec. 6 reading at Ripley-Grier Studios, where an all-Jewish cohort of eight Broadway actors played the more than 80 parts in the show, steady laughter throughout and a standing ovation at the end felt like finally seeing a dream come true.

“It felt amazing,” Bryan said about the first full run-through. “The sky’s the limit!”