An afternoon with Shayna Maydele, possibly the most Jewish dog in New York 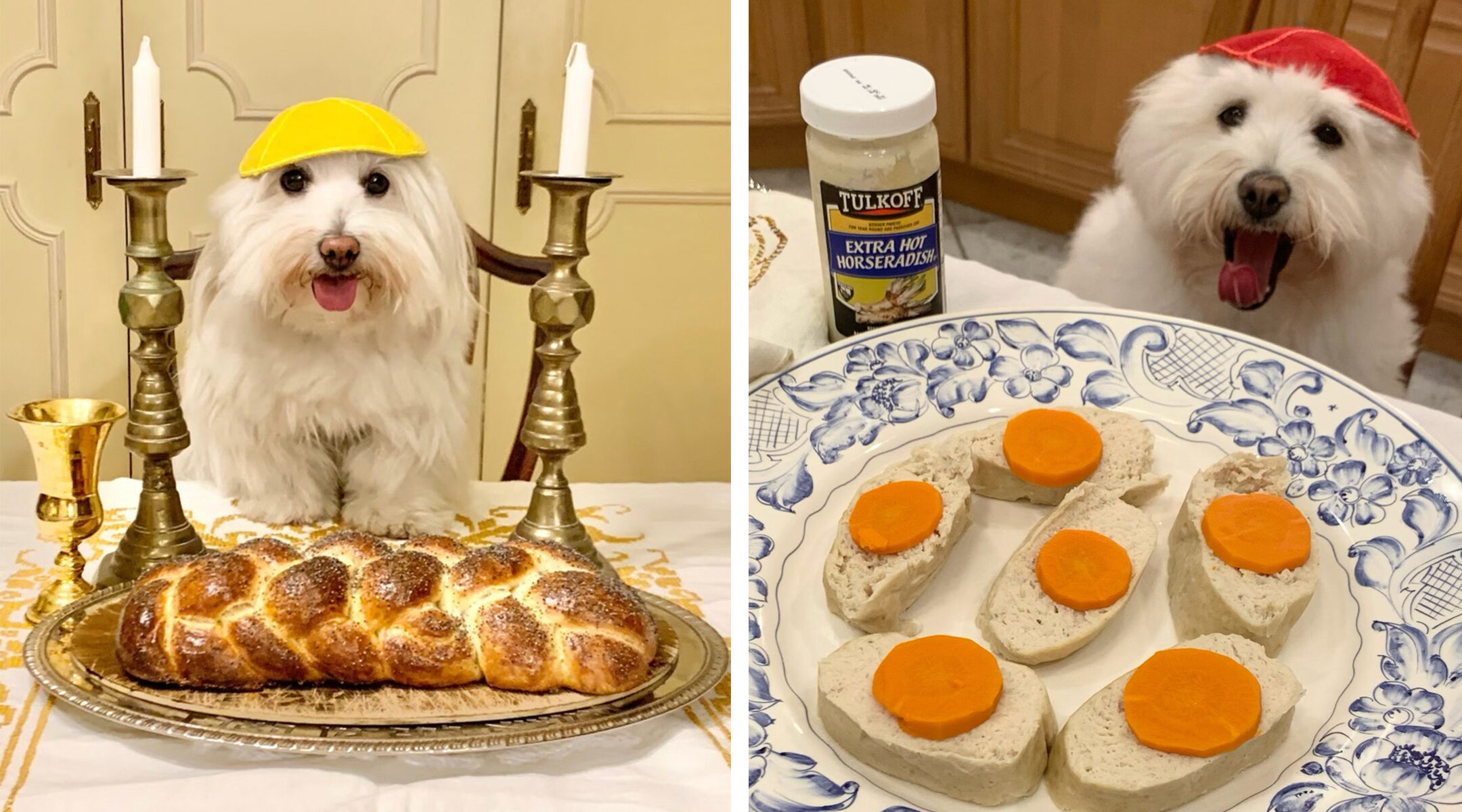 (New York Jewish Week) — In my decades as a journalist, I’ve interviewed some pretty powerful, important and, yes, even famous people. But never before have I been so excited — starstruck, even — to meet a subject, and this one wasn’t even human.

I was positively giddy to visit the Upper East Side home last week of Shayna Maydele, a small, white dog who has captured the hearts of thousands of adoring fans on Instagram. Shayna Maydele’s popularity isn’t just owing to her adorable punim — though her punim is 100% adorable, as as this committed fluffy-dog lover can attest. It’s also because her Instagram is filled with charming, authentic expressions of Jewish pride, as well as humorous takes on life in New York City.

Leaving aside the big question of whether or not a dog can be Jewish (I say yes!) — or even if owning a pet is a Jewish thing to do — every Friday, Shayna Maydele’s account features a heartwarming “Shabbat shalom” message. The Shabbat photos often include homemade challah, other times they might feature her “Papa,” or her owner’s dad. I always let out a squeal of delight when I see the posts, and I’m hardly alone: “I wake up each a [sic] Friday and await such good posts,” wrote one commenter on a Shabbat post earlier this month. “Shabbat Shalom, Shayna!”

“My Shabbat posts get the most likes out of everything,” Shayna Maydele’s owner, Heidi Silverstone, told me.

Since emerging on social media in 2019, Shayna Maydele (whose name means “beautiful girl” in Yiddish) has garnered nearly 9,000 (and counting) fans from all over the world — many of whom go beyond simply “liking” or commenting on a post. The Jewish National Fund, for example, has, unbidden, planted a tree in her honor; she also played an important role in the engagement of one couple who happened to meet her at a dog park. Shayna Maydele’s Shabbat messages have been shared by a wide variety of high-profile social media accounts, including Humans of Judaism, Jewish Memes Only and several of the New York Jewish Week’s partner sites, including Hey Alma and The Nosher. Her followers include Grammy-winning Jewish musician Joanie Leeds and Jewish comedian Hannah Einbender, the star of the HBO comedy “Hacks.”

It’s a pretty remarkable following considering Silverstone — who is also Shayna Maydele’s social media manager, if you will — doesn’t have any social media accounts of her own, nor did she set out to make her pup a star. It all started in June 2019, when Silverstone and her husband, Rob, flew to Arizona to pick up their puppy from the breeder. (Shayna is a coton de tulear, a breed made famous by Barbra Streisand, who notoriously cloned her pup. The breeder later told Silverstone she also sold Streisand her famous dogs. “I’m not sure if they’re related,” Silverstone said of their mutual pets, “but I can pretend they are!”)

So many friends and family members had wanted to see pictures of the new puppy, said Silverstone, that she figured it would be easier to set up an Instagram account. “I didn’t make it private — I figured nobody’s gonna know her,” she explained. “And then, all of a sudden, people were following.”

Shayna Maydele’s account began to really take off when the Jewish content started, which happened organically. “It wasn’t a conscious thing — it was Shabbos and I put a yarmulke on her head and said, ‘Shabbat Shalom,’ thinking I’m wishing my family and friends a Shabbat shalom.” Followers took notice. “People were liking it so much I thought, ‘OK, we’ll do a Shabbat shalom post every week.’” Other Jewish holidays soon followed. 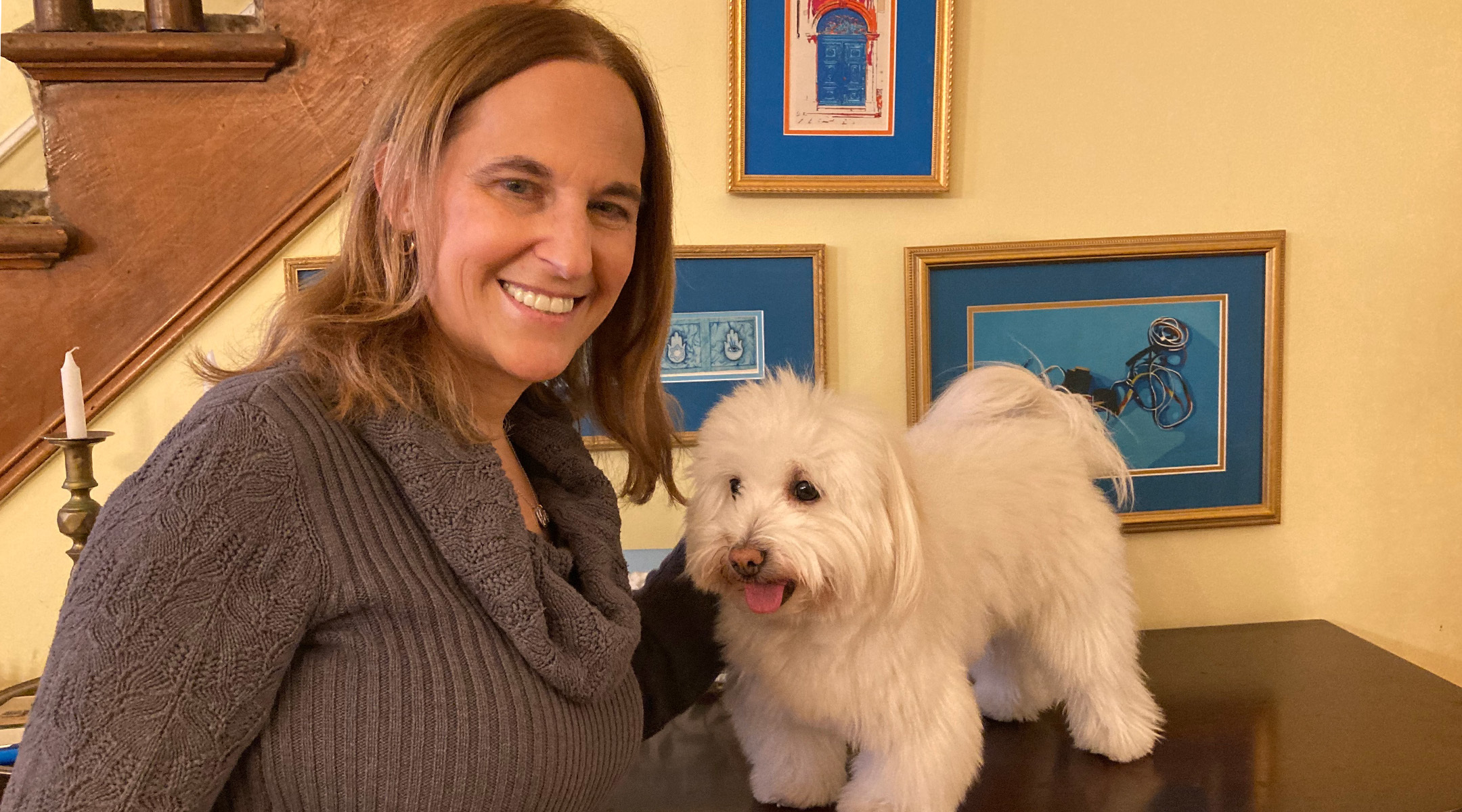 Heidi Silverstone poses with her coton de tulear, Shayna Maydele, whom she got in June 2019. (New York Jewish Week)

“The Jewish thing is just normal — it’s a part of our life,” said Silverstone, who chatted with me in her kitchen as Shayna Maydele, sitting beneath the table, interjected with an occasional woof.

Silverstone and her spouse are members of Park Avenue Synagogue; while they used to attend Shabbat services regularly, these days they are more likely to stream them. The parlor floor of the family brownstone is filled with Jewish art and Judaica (as well as some cool New York City treasures, such as coasters inspired by subway tokens).

In one corner of the the kitchen, where Shayna Maydele’s dog food sat untouched, hangs a framed Passover bagels recipe, handwritten by Silverstone’s grandmother, as well as a drawing her son Max made as a child of the Torah and other Jewish ritual objects made of cheese. (Max is now 25 and a fourth-year cantorial student at the Jewish Theological Seminary.) Around the corner is a painting made by a Shayna Maydele fan, a beautifully rendered version of an Instagram post featuring her holding a tub of Temp-Tee Whipped Cream Cheese.

A lifetime of shul-going means that there are enough kippahs in the home for Shayna Maydele to rarely pose wearing the same one twice — Silverstone estimates that a basket in the corner of the dining room contains some 200 skullcaps in a variety of textures and colors. Silverstone makes an effort to coordinate Shayna Maydele’s kippah to other accouterments that may be in the weekly Shabbat photo; on the day of my visit, Silverstone selects an orange kippah to match a painted ceramic tzedakah box, one that Silverstone had previously gifted to her grandmother.

When it’s time for the photo shoot, Silverstone’s “assistant” — that’s Silverstone’s husband, Rob, who is vice president of finance at media company Dotdash Meredith — emerges from his upstairs office. I had been warned that dogs, like babies, are notoriously difficult photo subjects, but on that December afternoon — with Shayna Maydele placed atop a low table next to the tzedakah box, and with Rob deftly sticking his fingers in Shayna Maydele’s mouth to elicit a smile — the whole adorable thing is over in minutes.

These days, Silverstone typically posts three or four times a week to Shanya Maydele’s account. Though she has no formal media background — a former dental hygienist, she now works as a workshop instructor for an au pair program — Silverstone said she is coached by her son, Michael, 28, who, in addition to working at a tech company, has his own photography business.

In addition to the Jewish content, there is other shtick. My favorites are the “new business ventures” that feature the coton posing beside or atop something someone has discarded on the street. (In one recent example, Shayna Maydele is seen in front of a play kitchen. “Fine dining on the lovely streets of NYC,” the caption reads. “I will cook and serve delicious meals prepared in this top of the line toy kitchen. FREE dog hair in every bite!”)

“We have so much trash on the street,” Silverstone said. “What’s really funny is that people in New York get it — they know what it is. But I have followers from all over the world. So probably, when they come to the city, they’re going to be looking for the streets paved in garbage.”

But the Jewish posts seem to be the heart and soul of the account, and Silverstone said she is moved by the positive reaction she gets from Shayna Maydele’s followers, both Jewish and not. She makes a conscious effort to define Jewish terms and holidays so they are accessible to everyone: On Simchat Torah in October, a photo of Shanya Maydele posing with a stuffed Torah is accompanied by an explanation of the holiday.

Though Silverstone jokes she spends “too much time” on the account, it’s clear the family is getting just as much joy out of the process as Shayna Maydele’s followers get from the results. When she hears from followers who are inspired to light candles or do something Jewish, “I love that,” she said.

Considering the impetus of the account was simply to save some time, Silverstone seems overjoyed that Shayna Maydele’s account is helping people learn more about Judaism.

“I guess my goal is just to expand reach — and if her Jewish comments could soften anyone’s opinion on Judaism or get another ally, I think that’s a pretty good goal,” Silverstone said when pressed on her hopes for the account. “But I certainly didn’t go into it that way.”