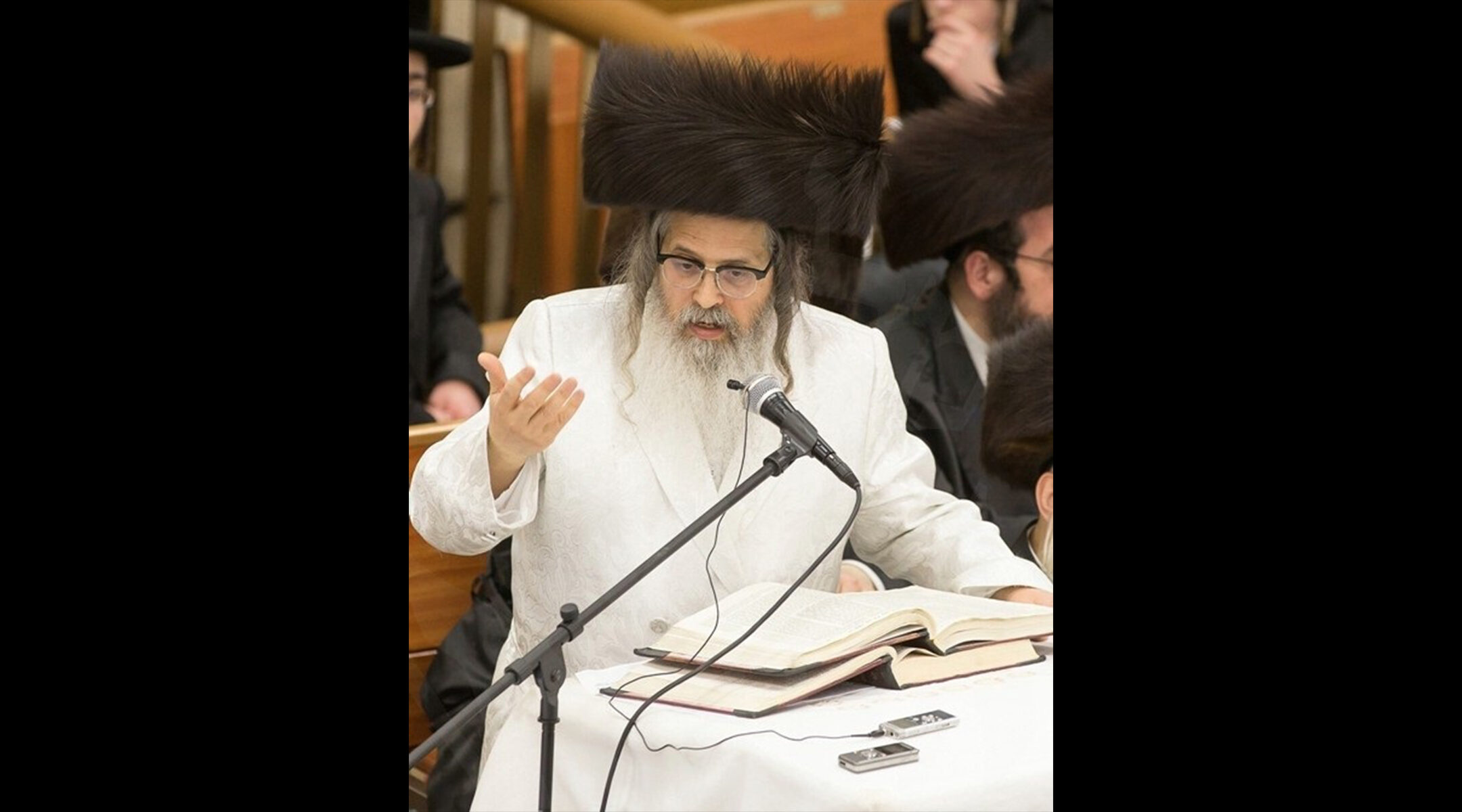 (New York Jewish Week) — The Satmar “Grand Rebbe” Zalman Teitelbaum paid a visit to convicted sexual abuser Nechemya Weberman in prison last month, according to a Yiddish-language newspaper serving the Satmar Hasidic community that has published a series of favorable articles about the former therapist convicted of sexually abusing an adolescent girl starting from when the victim was 12 years old.

The visit, and the weekly series of articles in Kiryas Joel Vochenshrift, have riled advocates for sexual abuse victims in the Hasidic community. They say the community’s leadership has a pattern of downplaying abuse charges and in this case convictions, further traumatizing the victims.

A sexual abuse survivor who lives in Kiryas Joel, the Orange County, New York seat of Zalman Teitelbaum’s Satmar faction, told the New York Jewish Week that abuse victims like her feel they are “being stabbed” when they see support for accused abusers in the Hasidic media and among their leaders.

“It’s retraumatizing victims,” said the survivor, who asked not to be named for reasons of privacy and safety. “It’s being stabbed every week, again and again, and knowing that if you’re ever going to open your mouth you’re going to be kicked out.”

The woman said that other survivors within the community told her “that they are not going to come forward so quick again because they see this every week.”

“It’s the most horrific thing,” the source said. “I am reliving all the hell that I’ve gone through. They are taking a molester, who did the worst thing, and they are promoting him, and calling him holy.” 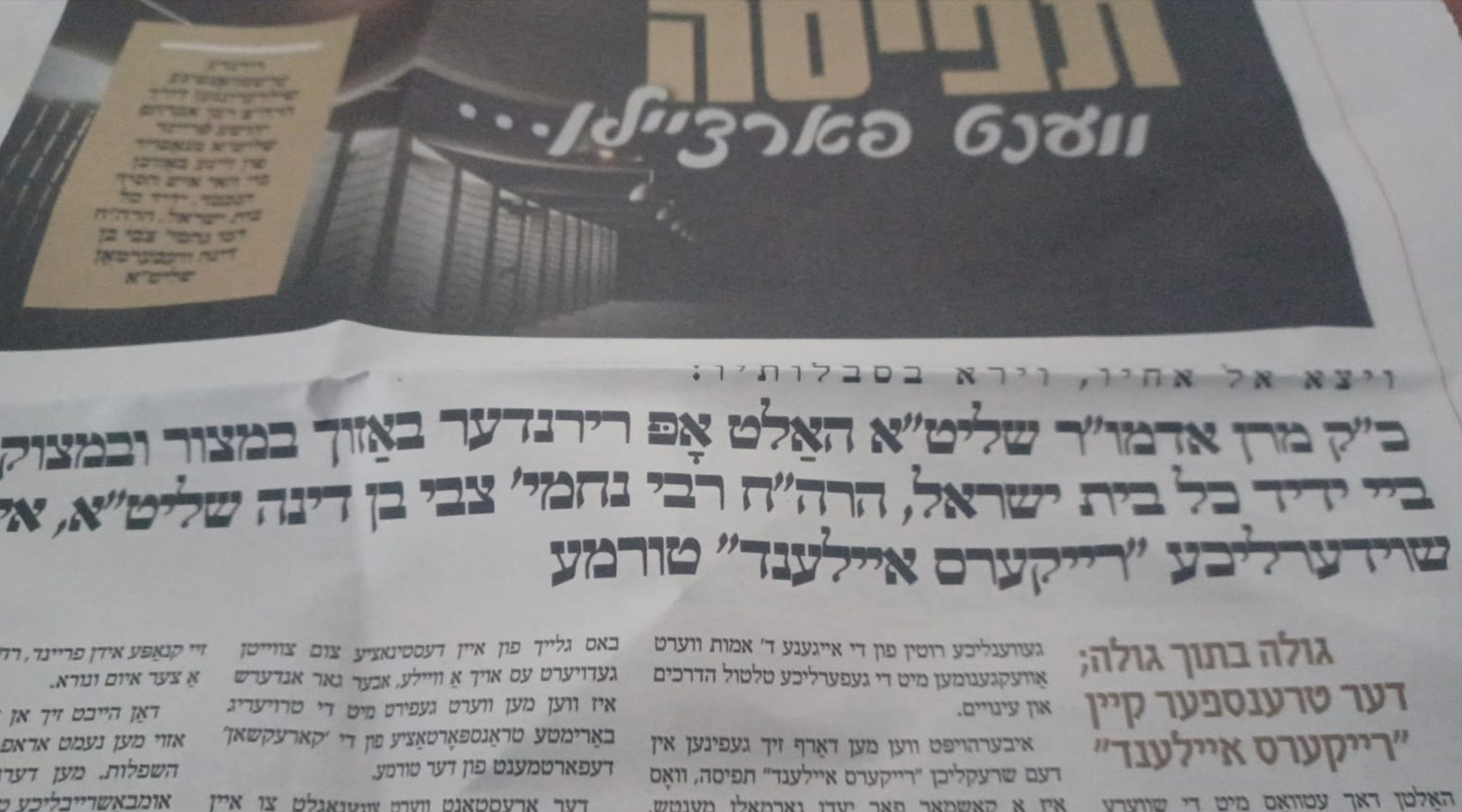 An article from Kiryas Joel Vochenshrift, which is publishing a weekly series about convicted sexual abuser Nechemya Weberman. (Courtesy)

The newspaper serves the faction of the Satmar community that is loyal to Zalman Teitelbaum. It published an article about his visit on Nov. 11.

“They say he’s wrongfully accused,” Shulim Leifer, a member of the Hasidic community who has read the articles, told the New York Jewish Week. “It’s written in a sense that it’s a foregone conclusion, that it’s a lynching that he went through.”

Accrding to the article about Teitelbaum’s visit, the rabbi spent over an hour with Weberman and “offered words of faith and belief in God” while the convicted sexual abuser was at Rikers Island for an appeal, the article said. Weberman is now at Shawangunk Prison in upstate New York. “Thanks to Hashem, after much advocacy, we did manage to prevail and we managed to get a visit from the [Grand Rebbe] who was able to come into the dark walls,” the article reported.

The United Jewish Organizations of Williamsburg and North Brooklyn, who are affiliated with the Grand Rebbe, and other representatives of Teitelbaum did not respond to a request for comment.

The articles are written by Rabbi Abraham Yehoshua Fraynd. Neither Fraynd nor the newspaper responded to a request for comment.

Weberman, was an unlicensed therapist who served the fervently Orthodox Satmar community, was 54 when he was convicted in 2012 of sexually abusing a young woman over the course of three years beginning in 2007. He was given a 103-year sentence in 2013, close to the maximum permitted by law.

The victim spent 15 hours on the witness stand recalling how she had been repeatedly raped and forced to perform oral sex in Weberman’s counseling office, where she had been sent because of her alleged immodest dress and rebellious behavior.

Many members of the Satmar community stood behind Weberman, who had served as the driver for the late Grand Rebbe Moses Teitelbaum, the father of Zalman Teitelbaum and his brother Aaron, who now lead rival factions of the Hasidic movement. Aaron Teitelbaum went so far as to suggest that Weberman’s accuser was “a zona,” which translates to “whore.” The victim claimed that after going to the district attorney, she received both bribes and threats in an attempt to convince her not to testify. The Hasidic community has long discouraged members from going to outside law enforcement, a practice long decried by advocates for victims of sexual abuse and other crimes.

In an article published Dec. 6, Weberman is quoted saying that his prison trial was “a mesira,” an act in which one Jew informs on another in contravention of Jewish law.

“Yes it’s true that there was a jury trial,” Weberman said in the piece. “It’s true in the course of nature, you can expect to get a prison term from a jury in such a case, but I got something that’s over 100 years. And that is something that’s outside of the ordinary.”

Weberman then laments that he doesn’t have a way to advocate for himself while stuck behind bars.

“I’ve been trying to appeal three or four times, that’s not normal,” Weberman said. “What am I left to believe? Am I supposed to believe that I’m never getting out of here? No.”

In another article, Weberman said, “I’ve accepted that God put me through this for reasons that I can’t understand.”

“Even though I’m wrongfully accused, I think one day, I’ll be out,” Weberman said.

Throughout many of the articles, Weberman is called many honorific names, including “a tremendous Hasid” and “shlita,” an acronym reserved for revered members of the community.

Leifer said that there are sexual abuse survivors within the community who are “beside themselves and disturbed by how this guy is lionized and idolized.”

“Sex abuse victims feel hurt and betrayed by this behavior,” Leifer said. “There is sort of a widespread undercurrent in the haredi community that we don’t do a good job with sex abuse, in terms of exposing it, preventing it, or helping victims.”

A Hasidic community member in Williamsburg who is close with the Weberman family told the New York Jewish Week that “no one really knows what happened behind closed doors,” referring to the abuse charges.

“It’s a pity that he’s been in jail already for such a long time,” the community member said.

The source added that Weberman, 64, is now “an old, broken man, with a family who suffers.”

“The community felt like he didn’t have a fair trial,” the source said. “If it really happened, he’s no longer a threat, that’s for sure.”

The source also said that according to Weberman’s family, the convicted felon is being kept in “inhumane” conditions. “There’s no air conditioning, no heat, no TV, it’s freezing,” the source said. “I’m not sure why we are not allowed to give a voice to someone who is inhumanely treated.”

David N. Myers, co-author of “American Shtetl,” a 2022 book about the Hasidic community of Kiryas Joel, told the New York Jewish Week that Teitelbaum may have visited Weberman in prison due to the rabbinic principle of “pidyon shevuyim,” which translates to “liberating captives.”

“Haredi Jews take this principle seriously,” Myers, a professor of history at the University of California, Los Angeles, wrote in an email. “There is a strong ethos of providing assistance to and seeking the release of fellow observant Jews who are incarcerated — often on the presumption that they, as good Jews, must have been treated unfairly or imprisoned under false pretenses.”

Myers added that there is a growing sense among haredi Orthodox Jews that they are under siege by the media and secular authorities. He noted the community rage over  a New York Times investigation in September that reported on Hasidic schools that are not meeting New York State standards in secular instruction.

“Many New York-area haredim feel under siege,” Myers said. “To be sure, the Weberman case precedes this new wave. He has always had some supporters, as well as many accusers and critics. But the current moment is one in which people in the haredi world feel greater liberty to say that the media are biased against them.”

In August 2021, Brooklyn District Attorney Eric Gonzalez wrote to then Governor Andrew Cuomo and asked him to commute Weberman’s sentence. (By then, Weberman’s sentence had been cut in half under a state law that requires a maximum of 50 years for the type of felonies for which he was convicted.) Gonzalez had long sought leniency for people with lengthy prison sentences, but local activists said his request smacked of politics.

Cuomo, who resigned in August 2021 amid a sexual harassment scandal, did not respond to Gonzalez’s request.