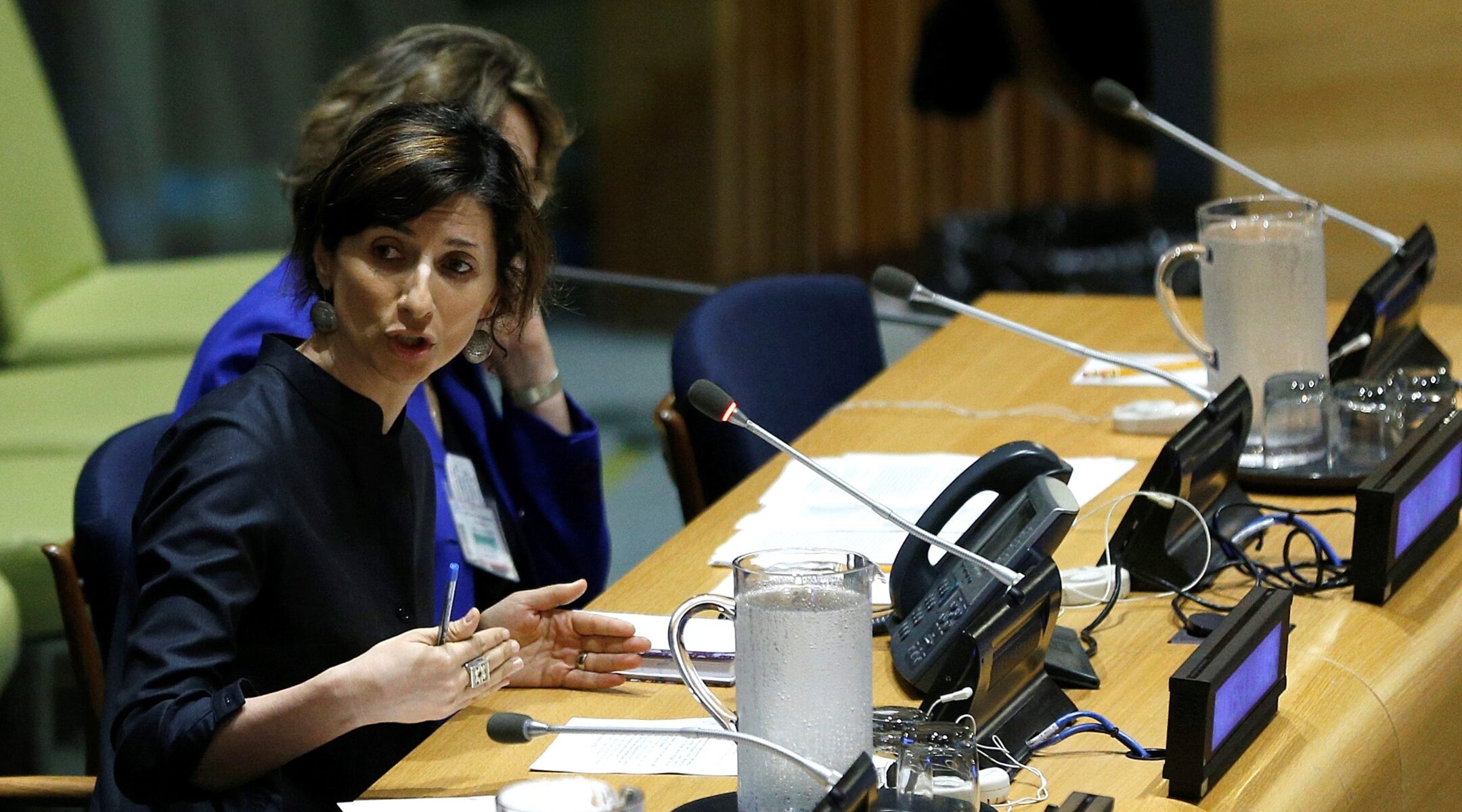 WASHINGTON (JTA) — Top U.S. and Israeli diplomats sharply criticized the top United Nations official monitoring Palestinian rights for past comments on Israel, including one involving the “Jewish lobby” and “guilt about the Holocaust.”

Michèle Taylor, the U.S. ambassador to the U.N. Human Rights Council, pointed to a comment Francesca Albanese made in 2014, saying Wednesday on Twitter that the Biden administration was “appalled” at the comments. Albanese, an Italian human rights lawyer who has long focused on defending Palestinians, is the U.N. special rapporteur on the situation of human rights in the Palestinian territories, reporting to the Human Rights Council.

“America and Europe, one of them subjugated by the Jewish lobby, and the other by the sense of guilt about the Holocaust, remain on the sidelines and continue to condemn the oppressed — the Palestinians — who defend themselves with the only means they have (deranged missiles), instead of making Israel face its international law responsibilities,” Albanese wrote during the 2014 Israel-Hamas war in a letter to her bishop that she posted on her personal Facebook page, and which was revealed by The Times of Israel on Wednesday.

Taylor wrote: “References to the ‘Jewish Lobby’ are an age-old trope; this is outrageous, inappropriate, corrosive, and degrades the value of the U.N.”

Deborah Lipstadt, the State Department envoy to monitor antisemitism, said Albanese’s 2014 remarks were part of an “established pattern” of antisemitism, alluding to a slew of past and recent controversies that have attended Albanese’s appointment to the job earlier this year. Albanese has also compared the Nakba, the dispersion of Palestinians during Israel’s war for independence, to the Holocaust and shared a Facebook post that compared Gaza to the Warsaw Ghetto.

“It severely undermines the credibility of the U.N. Human Rights Special Rapporteur to deal with the issue of human rights in the context of Israel and the Palestinian territories,” Lipstadt tweeted.

The Israeli mission to Geneva, where the U.N. Human Rights Council is situated, called the revelation “yet another stain on the credibility of this body and yet another example of the impunity that exists today regarding antisemitism and antisemitic comments made by U.N. officials.”

Albanese has clashed repeatedly with Israel and its defenders since assuming the role. Like some of her predecessors, including Richard Falk, Israel sees her as having biases that impair her credibility for the role and that sometimes cross over into into antisemitism.

Albanese and her defenders have cast the accusations as distortions aimed at undercutting her exposes of Israeli wrongdoing in Palestinian territory. She adopted that tone in reaction to the criticism of the 2014 statement.

In a statement posted on Twitter on Friday she said the statement was “a decontextualized and disingenuous extrapolation of what I said 10 [sic] years ago wrongly mischaracterized as antisemitic” and asked people to await further clarifications.

It was unclear what those would be, but she told the Times of Israel that her past words should not “distract” from her reporting on Israel’s alleged abuses.

“Some of the words I used, during Israel’s offensive on the Gaza Strip in 2014, were infelicitous, analytically inaccurate and unintendedly offensive. People make mistakes. I distance myself from these words, which I would not use today, nor have used as a UN Special Rapporteur,” she said.