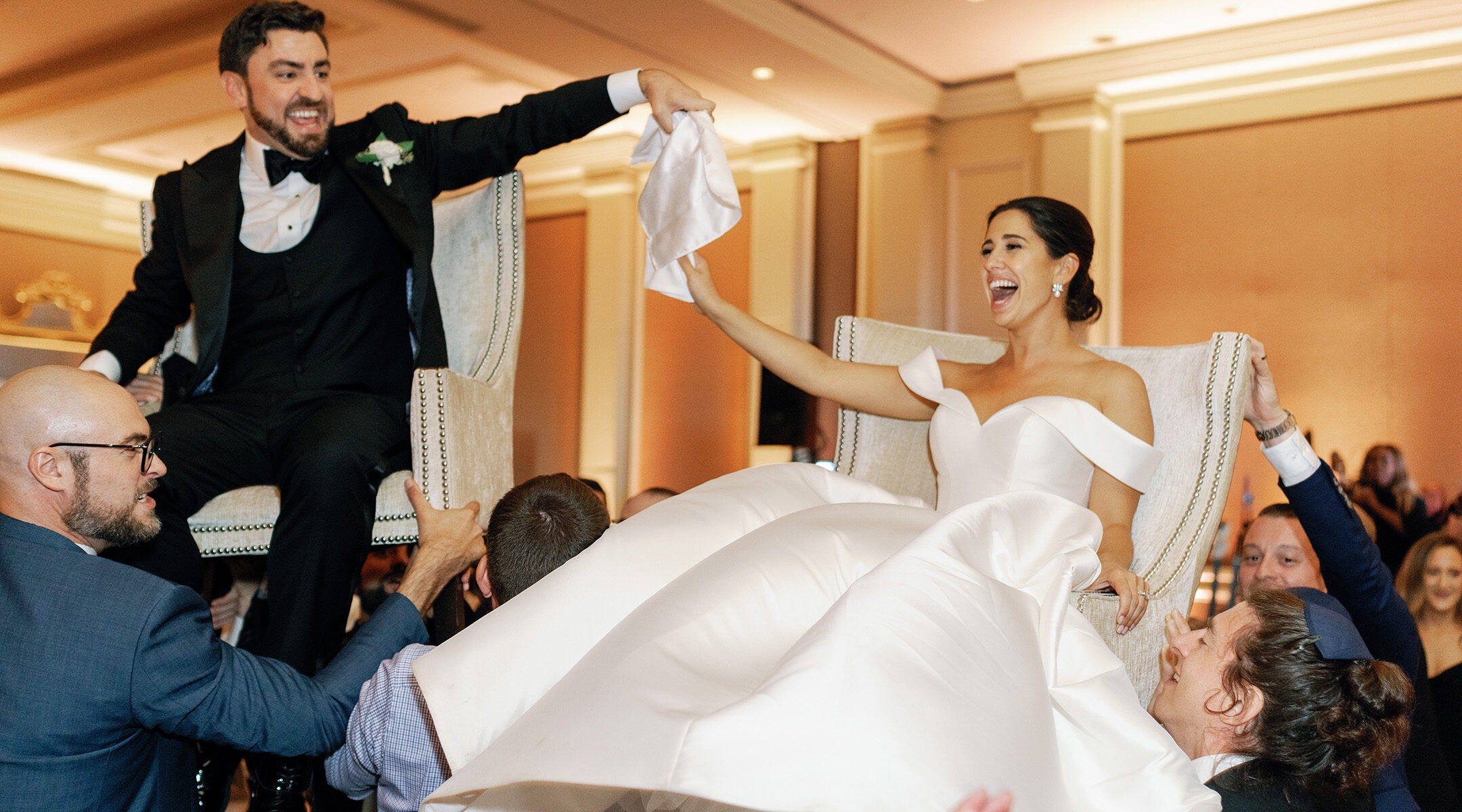 (JTA) — Years before they were a couple, Shelley Greenspan and Reuben Smith-Vaughan were just two Amazon employees wearing ugly Hanukkah sweaters to a company holiday party.

Both were working in Amazon’s Washington, D.C., office in 2017 when they each donned their sweaters — Greenspan in a hot pink number with a sparkly blue and gold dreidel; Smith-Vaughan with a blue and neon green Star of David emblazoned across his chest — for the annual holiday party. As they remember it, they were the only two attendees in Hanukkah sweaters.

But while they shared their amusement with each other, any sparks remained confined to Greenspan’s sweater.

“It did give her the knowledge that I was Jewish,” Smith-Vaughan said, noting that his ethnicity is not obvious from his name.

“And not someone just Jewish, but proud enough about it to wear a sweater to a holiday party,” Greenspan added.

Five years later, Greenspan is helping to plan Hanukkah gatherings of her own, as the White House liaison to the Jewish community. And she and Smith-Vaughan are married. But the path to both roles was hardly straightforward.

The year after the Amazon Hanukkah party, Greenspan took a job with the State Department and lost touch with her sweater buddy. That lasted until April 2020, when, isolated at home at the start of the pandemic, the pair matched on the dating app Bumble. 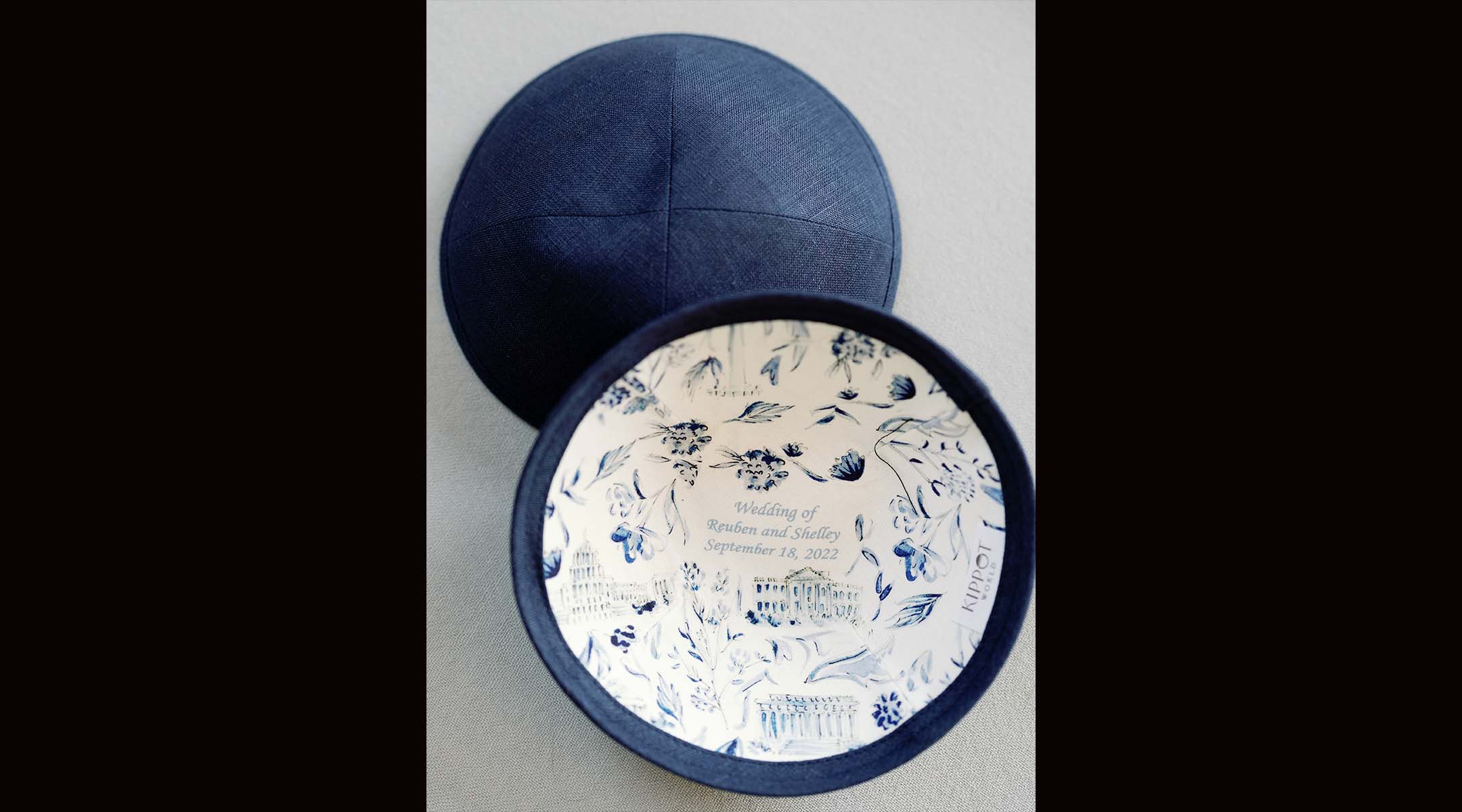 The kippah from their wedding included illustrations from D.C. (Emily Blumberg Photography)

For their first date, which happened over Zoom, Smith-Vaughan asked about her cocktail preference in advance, then dropped two small bottles of gin and tonic at her building’s lobby by bike. Back at home, he poured himself a bourbon, and they video-chatted over drinks.

There was an immediate connection, despite their very different Jewish upbringings.

Greenspan, 32, is originally from Miami Beach. She attended a Reform synagogue, a Conservative overnight camp and an Orthodox day school growing up before spending the year after high school in Israel, through Young Judaea’s gap year program. After graduating from the University of Florida, she entered the corporate world and then politics, working on both Hillary Clinton’s presidential campaign and “Jewish Women for Joe” in the Biden campaign.

Smith-Vaughan, 34, grew up on a coffee farm in Nicaragua, in a Jewish community so tiny “we were taken out of school when someone passed away to make a minyan,” or prayer quorum required for mourners, he recalled.

His bar mitzvah was held at the nearest functioning synagogue, 250 miles away in San Jose, Costa Rica. His father, Arturo Vaughan, serves as the Israeli honorary consulate in Managua, Nicaragua.

A graduate of American University, he is still at Amazon, now the director of Latin America public policy. 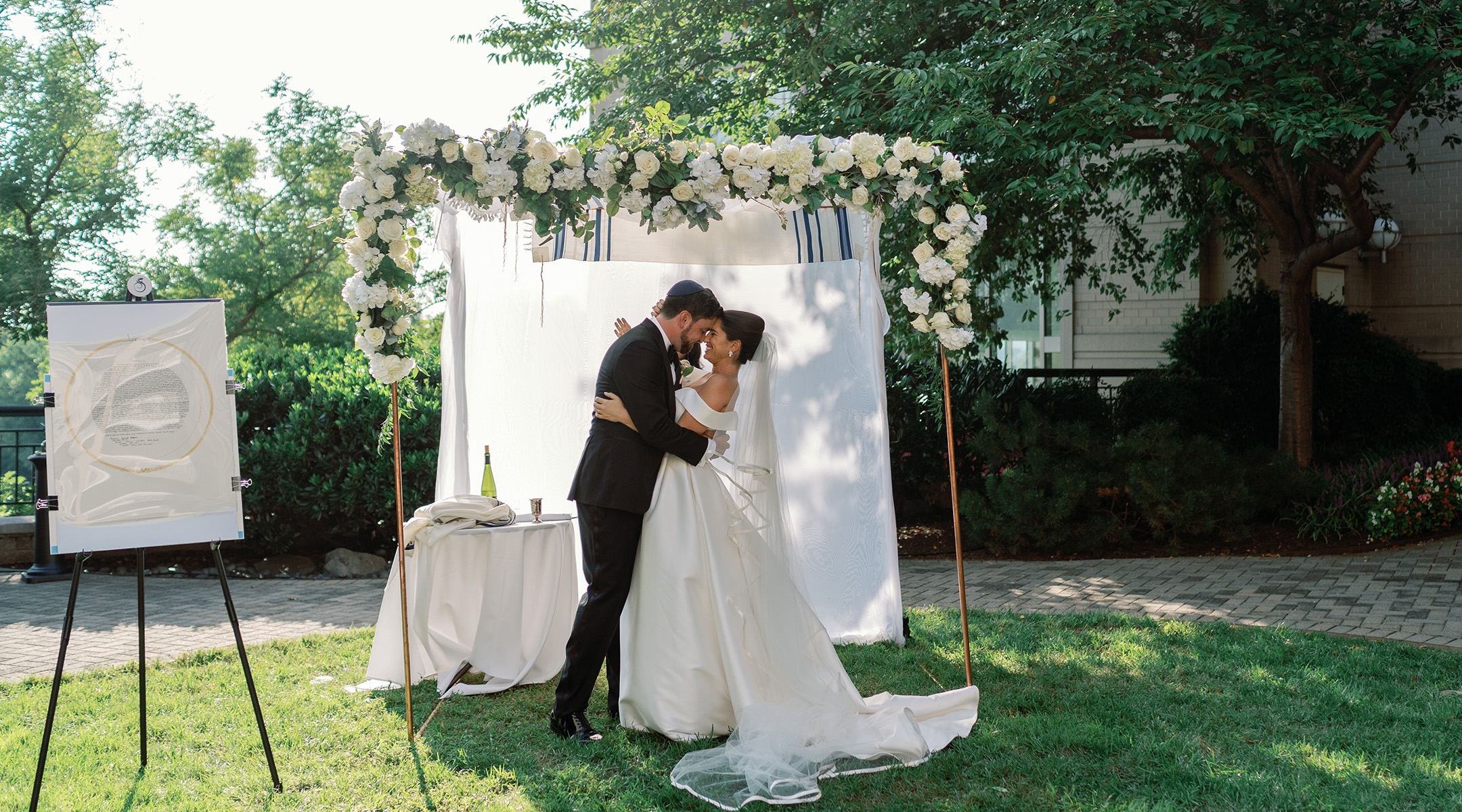 “Shelley is the most caring, loving, kind and elegant human being I’ve ever met,” Smith-Vaughan said. “She is kind to a fault, always wanting to help people.”

Their courtship followed the early-pandemic playbook, which Smith-Vaughan said “speeded things up really aggressively.” On their second date, they played tennis outdoors. On their third, he cooked dinner at her apartment, but they remained far away from each other.

By the fourth date, at her apartment, they broached the conversation about whether to date exclusively — or, in the lingo of the moment, whether to “pod” together.

“No one knew how to date during Covid, there was this ‘let’s all figure it out together,’” Greenspan recalled. She added, “There was never any ‘What are you doing tonight?’ because no one ever had any plans then.”

Road trips became a favorite way to spend time. It was after a jaunt to Bar Harbor, Maine, that Greenspan realized she didn’t want to see Smith-Vaughan go home. Meanwhile, he said he knew she was the one when he found out that she always carries a Washington Nationals baseball cap in her bag — he is a major fan.

“Shelley is the most caring, loving, kind and elegant human being I’ve ever met,” Smith-Vaughan said. “She is kind to a fault, always wanting to help people.”

“Reuben is the most honorable person I know,” said Greenspan. “His presence feels like home to me. He’s so optimistic and joyous and positive, his energy is infectious.”

In November 2021, during a Thanksgiving trip to North Carolina, where Smith-Vaughan’s mother lives, he proposed on the tennis court.

While wedding planning can be all-consuming, Greenspan said she had a particularly “absurd” few months when it overlapped with her new job. The position requires someone knowledgeable about Jewish communal life and able to represent the disparate viewpoints held by American Jews to the White House, as well as represent the administration to American Jews.

“I’d be calling rental companies while going into briefings in the White House,” she said.

The couple were married Sept. 18 by Rabbi Aderet Drucker, executive director and community rabbi of the D.C.-based Den Collective, a nondenominational spiritual community organization, at the District’s Salamander Hotel. 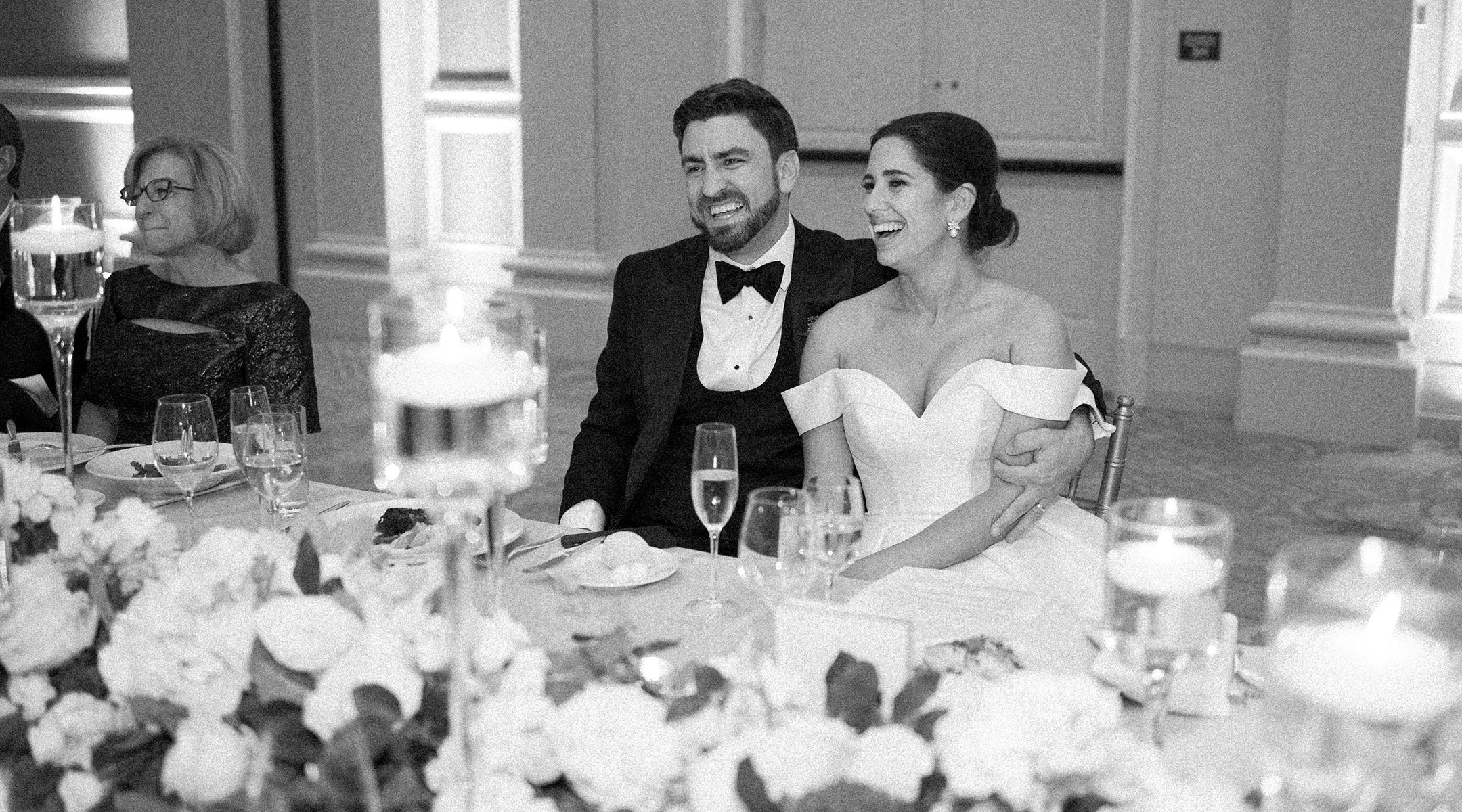 Their wedding weekend began with a Shabbat dinner at Compass Coffee’s roastery, which is co-owned by a Jewish veteran, and honored the groom’s coffee-farm upbringing.

On Saturday, guests could attend a Nationals game — against the Miami Marlins, the bride’s hometown team. The group was allowed onto the field before the game.

The reception didn’t only feature toasts and dancing; the bride offered a d’var Torah, and when the groom joined her to thank everyone for coming, he surprised her by singing “Eshet Chayil,” A Woman of Valor, that some Jewish men sing to their wives on Shabbat.

“Reuben has a beautiful voice and doesn’t really sing in public very much,” Greenspan said. “I wasn’t expecting it and it was so meaningful to me, there wasn’t a dry eye in the house.”

Then she added, “He still sings it to me every Friday.”