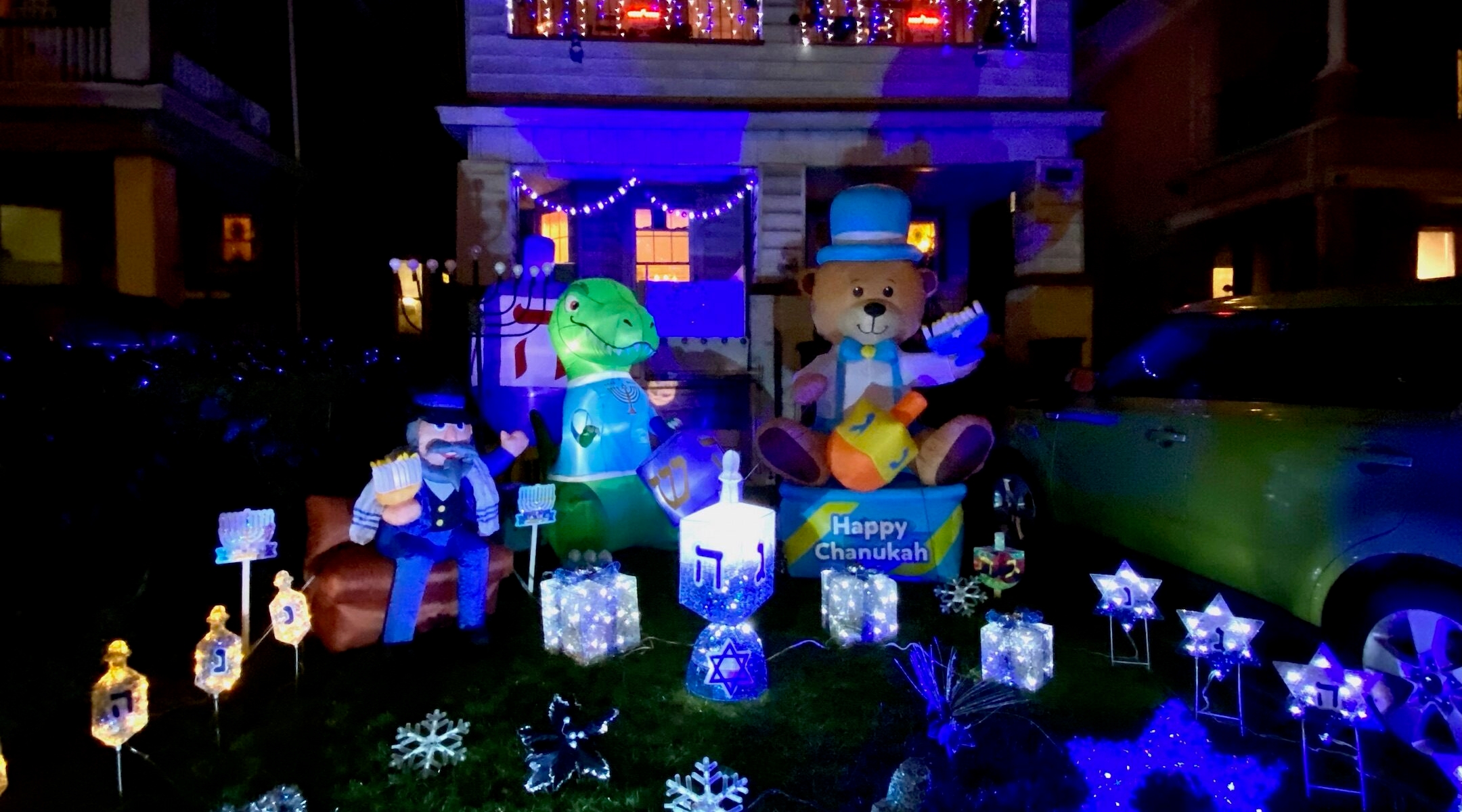 The Hanukkah House in Midwood is decorated a week before the holiday and stays up a week after with lights, inflatables and other decor. (Courtesy)
Advertisement

(New York Jewish Week) — Hanukkah, the winter holiday that commemorates the triumph of Judah Maccabee and the miracle of long-lasting oil, has plenty of heroes to celebrate. But in one Brooklyn family’s home, the hero is the “Hanukkah Fairy” — or at least the mom behind it.

Starting some 25 years ago, Gail Nalven Fuchs and her husband, David Fuchs, stayed up late the night before Hanukkah began to completely decorate the interior of their Midwood house in tinsel, dreidels and blue and white decor. When their two kids awoke wide-eyed at the wonder, the Fuchs explained that the Hanukkah Fairy, who came to decorate and spread the light and joy of the holiday, had paid their house a visit.

Over the years, what began as a lark has grown into a grand tradition: These days, eye-catching, illuminated Hanukkah decorations can be found on the home’s exterior and front lawn, too, including an oversized menorah, Jewish stars and  inflatables, such as a giant teddy bear wearing a Hanukkah sweater and a spinning dreidel. The “Hanukkah House,” as it is locally known, is now a bona fide neighborhood treasure, attracting neighbors, visitors and children from around Brooklyn. 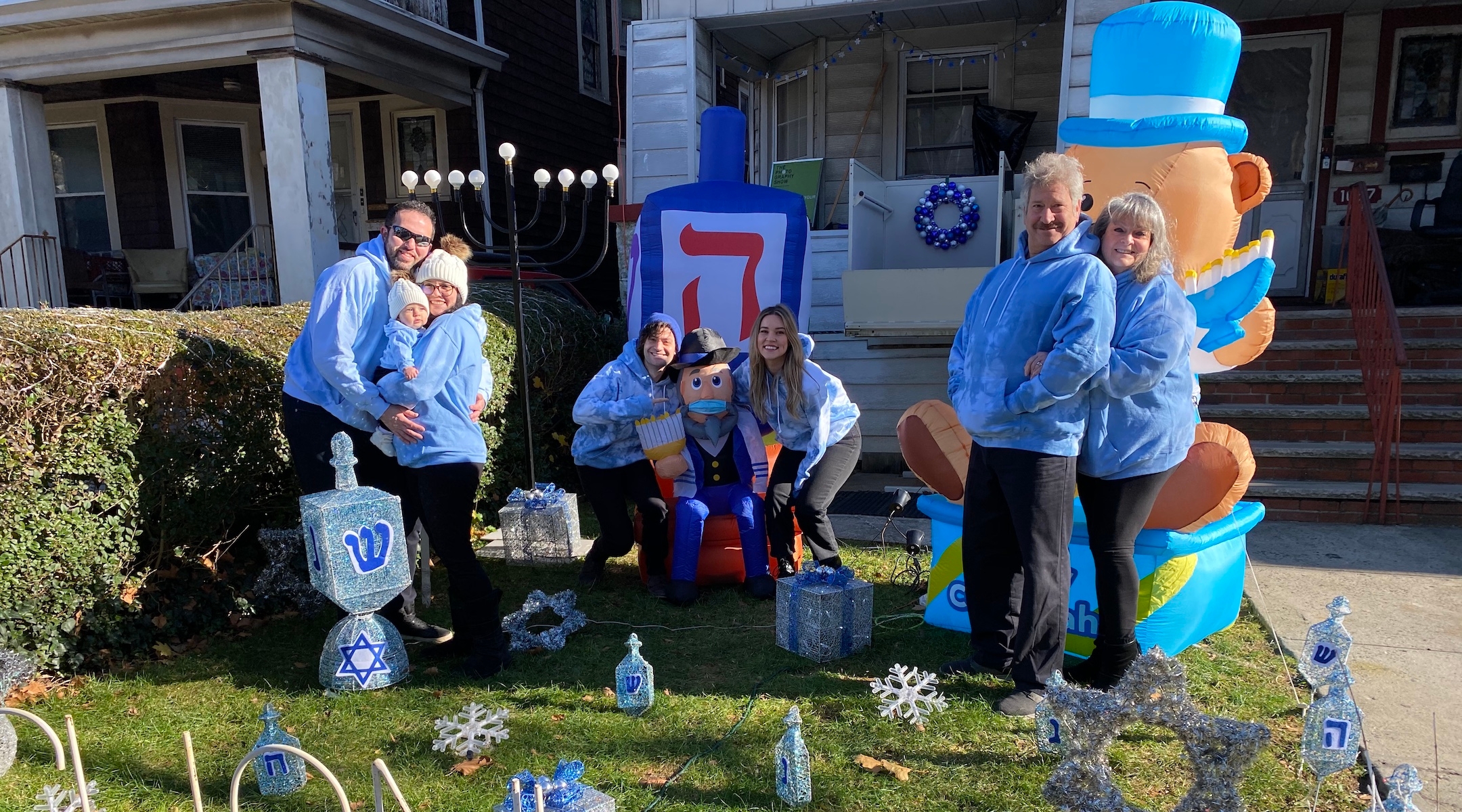 Fuchs and her family pose in matching sweatshirts outside their decorated house. L-R: Michael, Charlie and Alyson Kogan; Harrison and Katie Bryan; David and Gail Fuchs.

The tradition of Hanukkah decorating started in 1997 when the Fuchs’ kids, Alyson and Harrison, were 7 and 5. It was one of the family’s favorite holiday traditions to drive through the neighborhoods of Bay Ridge and Dyker Heights, where family homes have been bedazzled with over-the-top lights and Christmas decorations since the 1980s.

“Isn’t Hanukkah called the Festival of Lights?” her son, Harrison — a playwright whose “A Hanukkah Carol, or GELT TRIP! The Musical,” a Jewish take on Charles Dickens’ Christmas classic, is playing at The Green Room in Manhattan — asked one year as they drove through Sheepshead Bay. Fuchs confirmed it was.

“Then why don’t I see any Hanukkah lights?” he asked. “Everything is Christmas themed.”

Fuchs tried to explain to her son that even though the lights are Christmas themed, they are for everyone to enjoy. “He said, ‘I would enjoy it so much more. If I saw something that I know about. I don’t know about Christmas,’” she recalled.

It was a moment of realization for Fuchs. “New Yorkers always say we live in a melting pot,” she told the New York Jewish Week. “It didn’t feel that way at Christmastime.”

In response to Harrison’s questions, she helped him pen a letter to the New York Post. “It’s very hard to be a 5-year-old Jewish boy at this time of year,” the letter, which was published in 1997, opens. “I get very sad when I am driving the car in Brooklyn and I look at all the lights and decorations hanging across the avenues.” Harrison then goes on to request more Hanukkah decorations in the years to come.

The next year, a few weeks before Hanukkah, someone from the New York Post called to let Fuchs and her family know that there would be a large public menorah on Avenue U — sure enough, there it was.

“We drove by and Harrison was so excited. He went home and drew the menorah with paint and we hung it on our wall and he would look at it every day.” 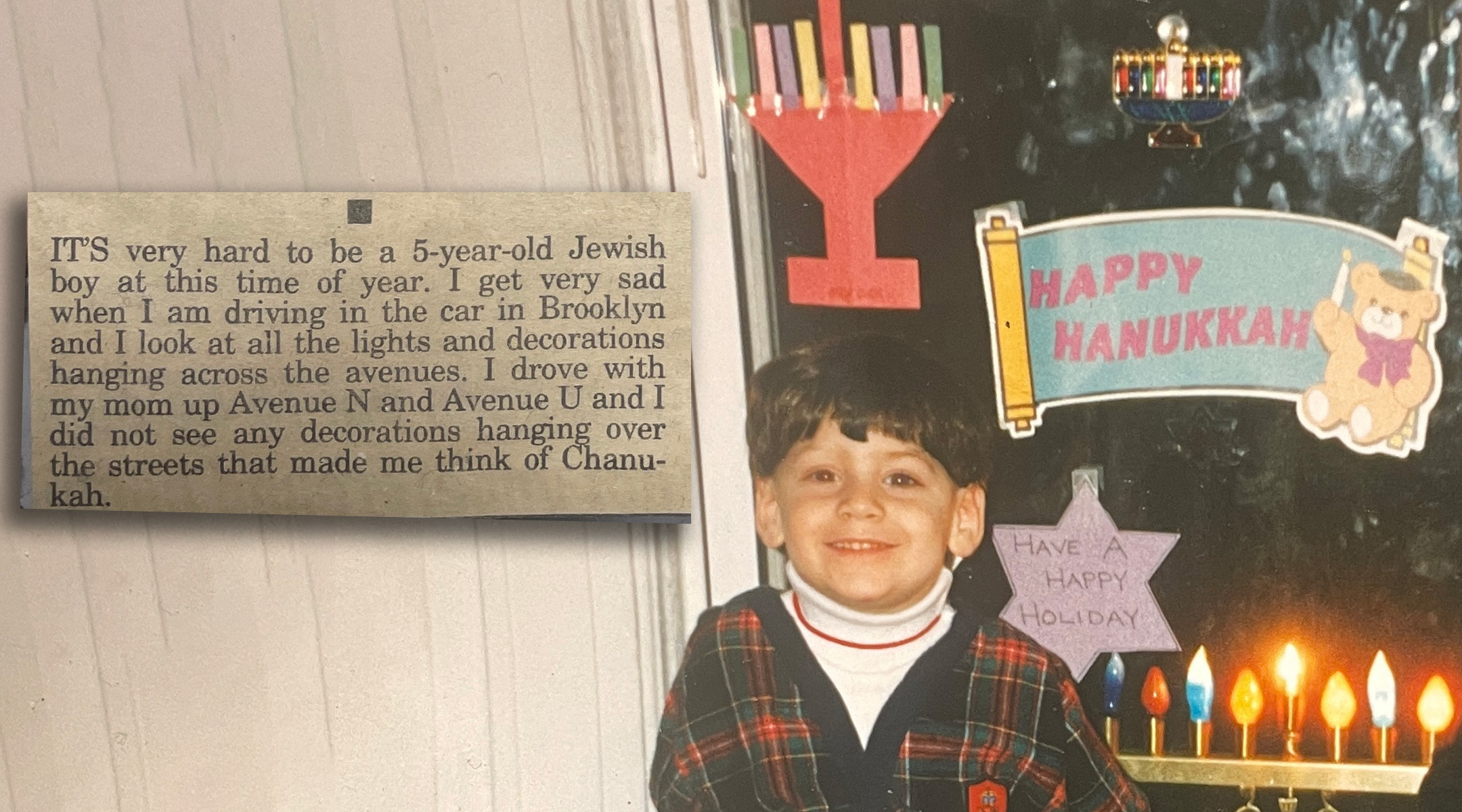 Harrison Bryan as a child in front of handmade Hanukkah art, alongside an excerpt of his letter he wrote to the New York Post in 1997. (Courtesy, design by Mollie Suss)

Seeing how happy her kids were when they saw their holiday represented, Fuchs decided to start decorating her home with dreidels, menorahs, candles, Hanukkah art and tinsel. Enter the Hanukkah Fairy, who Fuchs created to add a sense of magic and wonder to the holiday — and to surprise her young kids.

“Every year there were more and more Hanukkah decorations from the Hanukkah Fairy,” Fuchs said. “The kids used to write letters to her before the holiday saying ‘Hi Hanukkah Fairy, I hope you had a nice year, I cannot wait to see my home decorated this Hanukkah.’”

The exterior decorating began slowly: David Fuchs, who owns a handmade steel manufacturing and distribution business, built the giant menorah. Over the years, the “Hanukkah Elf,” as he’s known by his family, has since built Jewish stars and various signs for the house. They also try to add a Hanukkah-themed inflatable to their collection every year — this year’s newbie is a dinosaur wearing a Hanukkah sweater.

Harrison and Alyson are now 30 and 32, respectively, but the tradition has carried on. To keep the Hanukkah spirit strong, the decorations typically start going up about a week before the holiday starts, and stay up until a week after it ends, Fuchs said.

While Fuchs considers herself a Conservative Jew, many of her neighbors in Midwood are more traditionally Orthodox. Still, she’s noticed that many in the area are eager to take pics with the inflatables — some years, a school bus from a nearby yeshiva even stops in front of the house so kids can look.

“I love sitting back on my porch — nobody sees me and I love watching all the people go by,” she said. “It’s just a joy.”

The Fuchs family has always celebrated Hanukkah to the nines —  four generations of the extended family gather at their home for a Hanukkah party, complete with a gift exchange  — and decorating the house has become one of their favorite parts of the holiday. Fuchs’ adult children will help decorate the house, and Alyson Fuchs now also puts up decor in her apartment in Carroll Gardens, where her two daughters, who are 2-and-a-half years old and 7 months old, now carry on the wonder and delight at the Hanukkah Fairy.

It’s a tradition that’s become so important to the family that the “Hanukkah Fairy” even features in Harrison Fuchs’ new musical. “I really did believe in the Hanukkah Fairy,” Harrison, who uses the stage name Harrison Bryan, told the New York Jewish Week. “To me, this magical entity was just as real as the Tooth Fairy, or Santa to other kids. It was amazing waking up on Hanukkah morning — my sister and I would marvel at all the decorations — blue and white everywhere, and to such an extent that it felt impossible for this to have been done without actual magic.”

“It was only when I got a little bit older that I realized, it was real magic — the magic of having incredibly imaginative parents who wanted their children to feel loved and proud of their cultural identity,” he added.

Bryan made “The Hanukkah Fairy” a character in his musical — the fairy is the “Spirit of Hanukkah Present” who guides the Scrooge-like protagonist Chava Kanipshin through her night of soul-searching. “Even though it may have been a tradition my parents made up, it was always meant to spark joy in others too,” Bryan added. “And with the show, alongside the Hanukkah Fairy, we hope to do just that.”

Hanukkah starts this year on the evening of Sunday, Dec. 18, and Fuchs welcomes visitors to come by, enjoy the decorations and take pictures. Located in Brooklyn on East 14th Street between Avenues J and K, her house will be the one all lit up with Hanukkah gear. “You can’t miss it,” she said.