Why your synagogue, and mine, needs a pickleball court 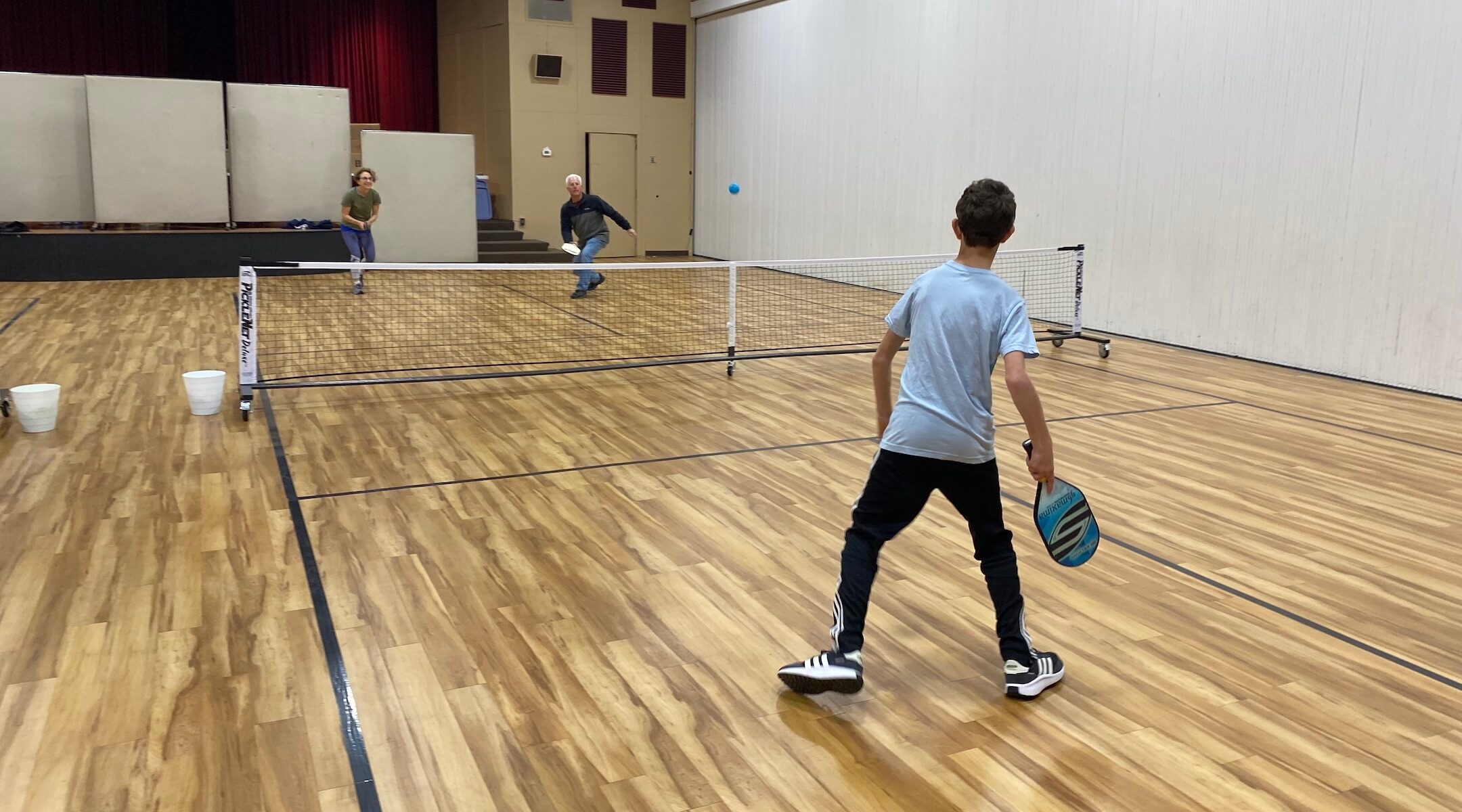 Boaz Lazarus-Klein, 12, awaits a return during a pickleball match at Congregation Shir Shalom near Buffalo, New York, where his father Alexander is the rabbi. (Courtesy Alexander Lazarus-Klein)
Advertisement

(JTA) — The weekday minyan at my synagogue has been moved from the sanctuary to its airy social hall. And whenever I attend I have the same lofty thought: This would make a great pickleball court.

Pickleball, the subject of countless breathless articles calling it the fastest growing sport in America, is essentially tennis for people with terrible knees. Players use hard paddles to knock a wiffle ball across a net, on a court about a third as big as a tennis court. It’s weirdly addictive, and because the usual game is doubles and the court is so small, it’s pleasantly social. I play on a local court (I won’t say where, because it’s hard enough to get playing time), where a nice little society has formed among the regulars.

“A nice little society among the regulars” is also how I might describe a synagogue. Or at least that’s the argument I fantasize making before my synagogue board, in a “Mr. Smith Goes to Washington”-style speech that will convince them to let me set up a net in the social hall so I can play in the dead of winter. I dream of doing for synagogues and pickleball what Rabbi Mordecai Kaplan, the founder of Reconstructionist Judaism, did for shuls and pools: He popularized the notion of “synagogue-centers” that would include prayer services as well as adult ed, Hebrew schools, theater, athletics and, yes, swimming pools.

I might even quote David Kaufman, who wrote a history of the synagogue-center movement called “Shul With a Pool”: “Kaplan was the first to insist that the synagogue remain the hub from which other communal functions derive. Only then might the synagogue fulfill its true purpose: the fostering of Jewish community.”

Alas, the title “Mordecai Kaplan of Pickleball” may have to go to Rabbi Alex Lazarus-Klein of Congregation Shir Shalom, a combined Reform and Reconstructionist synagogue near Buffalo, New York — which knows from winter. Last week he sent me a charming essay saying that his synagogue has begun twice-weekly pickleball nights in its social hall. About 40 members showed up on its first night in November, and it’s been steady ever since.

“When my synagogue president presented the idea during High Holy Day services, many of our members rolled their eyes,” Lazarus-Klein, 49, wrote. But the rabbi counters by citing Kaplan and paraphrasing one of his forebears, Rabbi Henry Berkowitz, a 19th-century Reform rabbi who encouraged synagogues in the 1880s “to create programming related to physical training, education, culture, and entertainment to help better compete with social clubs. Over the years, synagogues have experimented with all types of sports activities including bowling, basketball, and, more recently, Gaga. Why not pickleball as well?”

Lazarus-Klein also told me in an interview that his synagogue doesn’t do catering, so the “social hall just sits empty except for High Holidays or bigger events.”

“Our buildings were built for just a few times a year. It’s a shame,” he said. “We have tried as a congregation to get our building more use. We rent to a preschool, we have canasta groups, we have adult education. But for large swaths [of time], especially the social hall is just completely empty.”

Lazarus-Klein wrote that the pickleball sessions have attracted regular synagogue-goers, as well as “many others who had never been to any other synagogue event outside of High Holy Days.”

The players also cross generations, including the rabbi’s 9- and 12-year- old sons and congregants as old as 70. “With a little ingenuity and a few hundred dollars, our empty social hall is suddenly filled several nights a week.”

I offered the rabbi two other arguments for in-shul pickling. First, hosting pickleball honors the spirit of any synagogue that has “Shalom” in its name: By bringing the court under its roof, the synagogue avoids the turf battles between tennis players and picklers that are playing out, sometimes violently, in places across the country.

And I shared with Lazarus-Klein my obsession with the synagogue as a “third place” — sociologist Ray Oldenburg’s idea of public places “that host the regular, voluntary, informal and happily anticipated gatherings of individuals beyond the realms of home and work.”

“That’s a great way of thinking of it,” said Lazarus-Klein. “I think our membership does kind of use it that way. It’s another base, not where they’re working and not where their home is, where they can feel at home.”

The “shul with a pool” has long been derided by traditionalists who say the extracurriculars detract from the religious function of synagogues. Kaufman quotes Israel Goldstein, the rabbi of B’nai Jeshurun in New York, who in 1928 complained that “whereas the hope of the Synagogue Center was to Synagogize the tone of the secular activities of the family, the effect has been the secularization of the place of the Synagogue…. [I]t has been at the expense of the sacred.”

Lazarus-Klein, who was ordained by the Reconstructionist Rabbinical College. argues that there is sacred in the secular, and vice versa.

“I think a synagogue is a community,” he told me. “A community is a place that supports each other and it’s certainly not just about Jewish ritual, right? It’s about being together in all different ways. And the pickleball just really expands what we’re able to offer and who we’re able to reach.”

Kaplan, I think, deserves the last word: The synagogue, he wrote in 1915, “should become a social centre where the Jews of the neighborhood may find every possible opportunity to give expression to their social and play instincts. It must become the Jew’s second home. It must become [their] club, [their] theatre and [their] forum.”

It must become, I know he would agree, a place for pickleball.