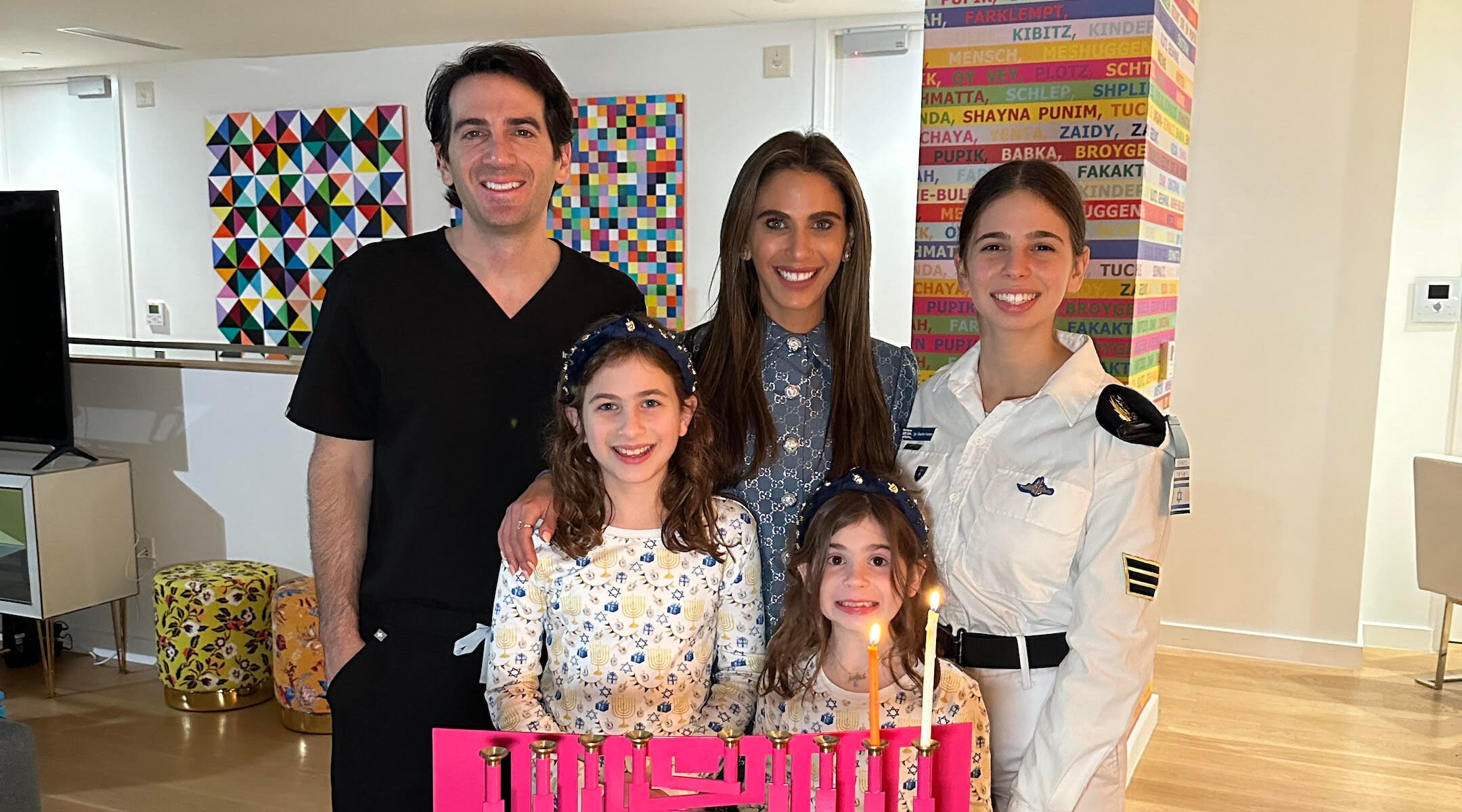 Influencer Lizzy Savetsky (center), who was briefly a cast member of the "Real Housewives of New York," welcomed an Israeli soldier to her home to light candles on the first night of Hanukkah as part of a campaign with Friends of the IDF. Pictured here with her husband Ira, daughters Stella and Juliet, and Israeli sergeant Shahar. (Courtesy)
Advertisement

(New York Jewish Week) — Lizzy Savetsky’s life has been turned upside down and inside out over the past eight months.

The 37-year-old social media influencer, who identifies as “a proud Orthodox Jewish woman,” became practically a household name this summer when she was announced as a cast member for the 14th season of “The Real Housewives of New York.” Having recently relocated from Texas to the Upper East Side, the mom of three kids (Stella, 10, Juliet, 8 and Ollie, 2) was thrust into the spotlight alongside six other New York City-based socialites, including fashion designer (and “Girls” guest star) Jenna Lyons and Israeli real estate agent Erin Lichy.

But then, in mid-November, after just weeks of filming, Savetsky left the show. At the time, she said it was due to antisemitism she experienced in online forums. In the aftermath of her departure, there were unsubstantiated reports that she clashed with other cast members, and that her husband had been heard using a racial slur.

In a recent interview with the New York Jewish Week, Savetsky declined to comment on those reports. Instead, she spoke about something she considers exceedingly more important: using the joy and light of Hanukkah — and, well, her social media reach of 225,000 Instagram followers — to fight antisemitism.

Though she’s no longer associated with the reality juggernaut, Savetsky has emerged as a famous Jewish New Yorker nonetheless. These days, she’s making public appearances to talk about community safety and antisemitism, and she even hosted a Hanukkah party at her home where she lit the menorah alongside Mayor Eric Adams.

This Festival of Lights, Savetsky is the face of the Friends of the Israeli Defense Forces’ “Live the Miracle” media campaign. Each night of Hanukkah, a different high-profile Jew lights a candle alongside an Israeli soldier, part of a video campaign intended to stand up against antisemitism while supporting the IDF. Also featured in the videos are stand-up comedian Modi Rosenfeld, Israeli actor and anti-antisemitism ambassador Noa Tishby and rapper Kosha Dillz.

Savetsky and her family lit the candle on the first night of Hanukkah alongside Shahar, a female naval combat sergeant currently serving in the IDF. Savetsky called Shahar “an amazing role model for her daughters” who showed them “you’re never too young or too small to contribute amazing things to the Jewish people.”

“It was really one of the most special experiences that we’ve had as a family,” Savetksy said of meeting Shahar and lighting the candles with her. “From a biblical sense, Hanukkah comes after a very dark time and it’s about bringing light to the darkness. To be able to celebrate this, in this moment, is a profound experience, and to be able to do that with a soldier from the IDF is something that means so much to me and my family and to be able to share that with the world is a really big deal.”

A post shared by Friends of the IDF (FIDF) (@friends_of_the_idf)

The FIDF campaign is only the latest move by Savetsky to showcase her Jewish pride. Though she calls herself an “accidental activist” — the NYU grad who grew up in Fort Worth first began her fashion blog, “Excessories Expert,” in the 2010s, and her media accounts then were mostly dedicated to fashion and lifestyle content — she has become well known for talking about Jewish traditions and customs, promoting Zionism and her love for the State of Israel and, perhaps most urgently of late, calling on others to help fight the scourge of antisemitism.

“I just saw how necessary it was,” Savetsky said of her shift to calling on others to help fight antisemitism. “I want to do everything I can for my people because I want to ensure a future for my children and their children. So I really made a conscious decision to shift my platform to not only fighting antisemitism, but to also share and educate about Judaism because I think a lot of hate is born out of fear.”

“It’s a privilege to stand in solidarity with these influential Jewish figures who will not let darkness prevail,” said Steve Weil, the chief executive officer of Friends of the IDF. “These are people, who, in the face of social media and all sorts of attacks, are standing up for morality, for dignity, and for these young men and young women who are literally at the front line of humanity.”

“I have always been unapologetic about my support for Israel and calling myself a Zionist,” Savetsky told the New York Jewish Week. “I want to put a face to what that means — it is like a wife and a mother and somebody who’s loving and hard-working.”

And yet, her beliefs and outspokenness have drawn the ire of many, especially when the “Real Housewives” cast was announced. Her Instagram handle proclaiming her a “proud Zionist” drew broadsides from pro-Palestinian activists, while some Jews on social media also criticized her for not dressing modestly despite being part of a Modern Orthodox Jewish community.

Savetsky said she and her family received hateful messages and even death threats. Even her husband, plastic surgeon Ira Savetsky, received a letter mailed to his office calling him a “kike” and an “arrogant piece of sh–.”

“I expected to receive negativity. I know that, unfortunately, Israel is a very polarizing topic and I have always been unapologetic about my support for Israel,” she said. “But the amount of hate and the fact that it was coming from all directions — from the far right, from the far left, from so many different groups of people — and the viciousness of it just it really broke my heart.”

The vitriol became overwhelming, Savetsky said. “For the first time I found myself really fearing for my safety and questioning my decision to put myself in this public position,” she said.

Ultimately, after only weeks of filming, Savetsky insists she decided to leave the show because of the antisemitism she faced. “It was definitely not the path for me and for my family,” Savetsky told the New York Jewish Week. “I have no regrets about going through the process because if anything, it shined a light on just how much hate there is out there.”

“I would rather know and understand the reality of it so that I can use my efforts to fight it,” she added. “The fear that I felt from experiencing all the hate I’ve gotten in the past few months really just motivated me to double down and fight even harder.”

Days after her announcement, Page Six, citing “production insiders,” reported that there was more to the story surrounding Savetsky’s departure — including that Savetsky declined to match a non-Jewish cast member up with a Jewish man, and that her husband repeated anti-Black slurs to a producer.

Savetsky declined to comment on these allegations, nor have the rumors been confirmed by Bravo or a named member of the cast. The show is set to air sometime in 2023.

And while she may not be a “Real Housewife,” Savetsky plans to stay in the city. “New York is the center of the universe,” she joked, citing the large and diverse Jewish community as a huge reason why she wanted to raise her kids here. Living on the Upper East Side, Savetsky’s daughters attend a Modern Orthodox day school, and the family is a member of the newly created Altneu congregation, helmed by Rabbi Benjamin Goldschmidt and his wife Avital Chizhik-Goldschmidt.

Despite leaving the show, Savetsky has no plans to be silent about antisemitism. Savetsky has gained more than 20,000 followers since the “Real Housewives” cast announcement, and the subsequent antisemitism she faced —  as well as the rise in antisemitic incidents, in general — have only inspired her to be more outspoken about her Judaism and Zionism, she said.

“Everything has changed in the past few months — for me, personally, and I believe for the Jewish people and the world,” Savetsky said. “The world is waking up to the reality that antisemitism isn’t just this looming threat, but it’s real and it’s here and I think people are opening their eyes to that.”

She added: “I’ve never felt like my purpose was so clear as I do in this moment to be loud and proud and to stand up for my people.”