‘Married to the Mob,’ but under a chuppah: A new memoir details a Jewish family’s crime ties 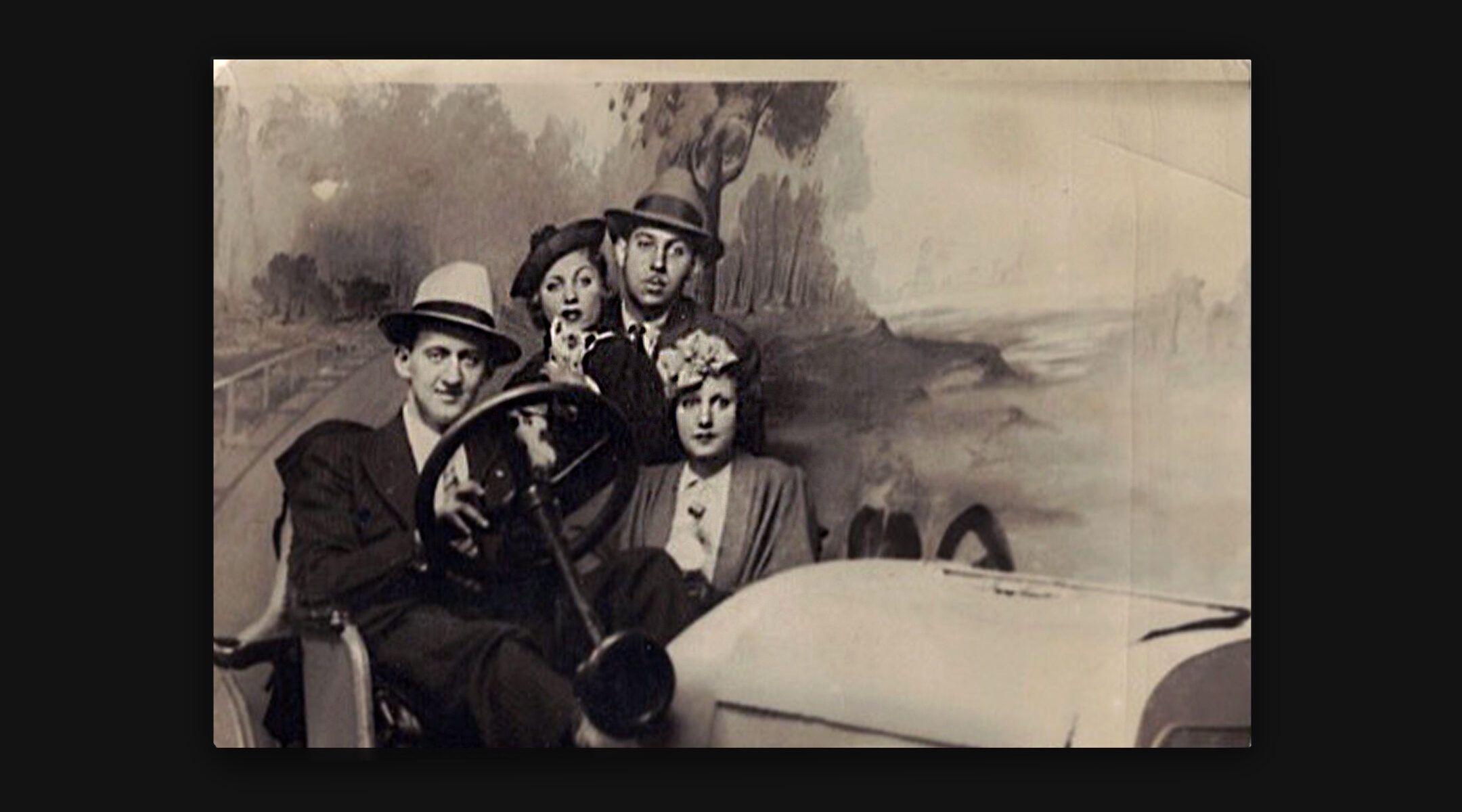 Author Alan Geik’s parents, Lou and Reba Geik, foreground, pose for a photo at a penny arcade with the mobster Benny Kassop and his mistress Sylvia Lorber, perhaps in the 1940s. (Courtesy Alan Geik)
Advertisement

The father ran a mob-protected trucking company in Manhattan’s Garment District. One brother, an NYPD detective, chauffeured organized crime couriers around the city with illicit cash. A kid sister visited a Las Vegas casino where the tween was set up with a couple of slot machines in a private room.

And a close family friend was sent up the river for killing a notorious Jewish gangster.

Dutch Schultz was the mob name of Arthur Flegenheimer, the Jewish bootlegger and numbers racket kingpin who left this mortal coil in October 1935 at the Palace Chop House in Newark. The triggermen were two Jews, members of the organized crime group Murder Inc. Mendy Weiss and Charles “Bug” Workman, the Uncle Charlie of the memoir’s title, did the hit.

Workman, who reportedly killed more than 20 people before pleading guilty to the murder of Dutch Schultz, was not a blood relative of author Alan Geik. But Workman grew up with Geik’s father on the Lower East Side and was so close to the Geik family he was considered an uncle. The author was in his 20s when he first met Workman, after the hitman was released from a New Jersey prison in 1964.

“I would never think of calling him anything but Uncle Charlie,” said Geik, 80, a retired TV and film editor who lives in Las Vegas.

In addition to diving deep into Workman’s story, the book also explores how Jewish mobsters and their hangers-on fought antisemitism, beat up Nazis and helped a fledgling Israel acquire arms for its War of Independence.

“These were people, from the first generation of Jews in America, who fought back against antisemitism in the streets,” Geik said. “Their parents fled the pogroms of Eastern Europe. They were not going to let it happen again and they didn’t.”

Geik’s book joins a crowded shelf of histories and memoirs of the Jewish mob, including “But He Was Good to His Mother: The Lives and Crimes of Jewish Gangsters,” by Robert A. Rockaway, and “Tough Jews: Fathers, Sons, and Gangster Dreams,” by Rich Cohen. Like those books, Geik’s family history provides a sort of reverse image of typical Jewish immigrant stories: Instead of scrapping their way up from New York’s Jewish enclaves into retail and the professions, Geik’s family joined a criminal counterculture. 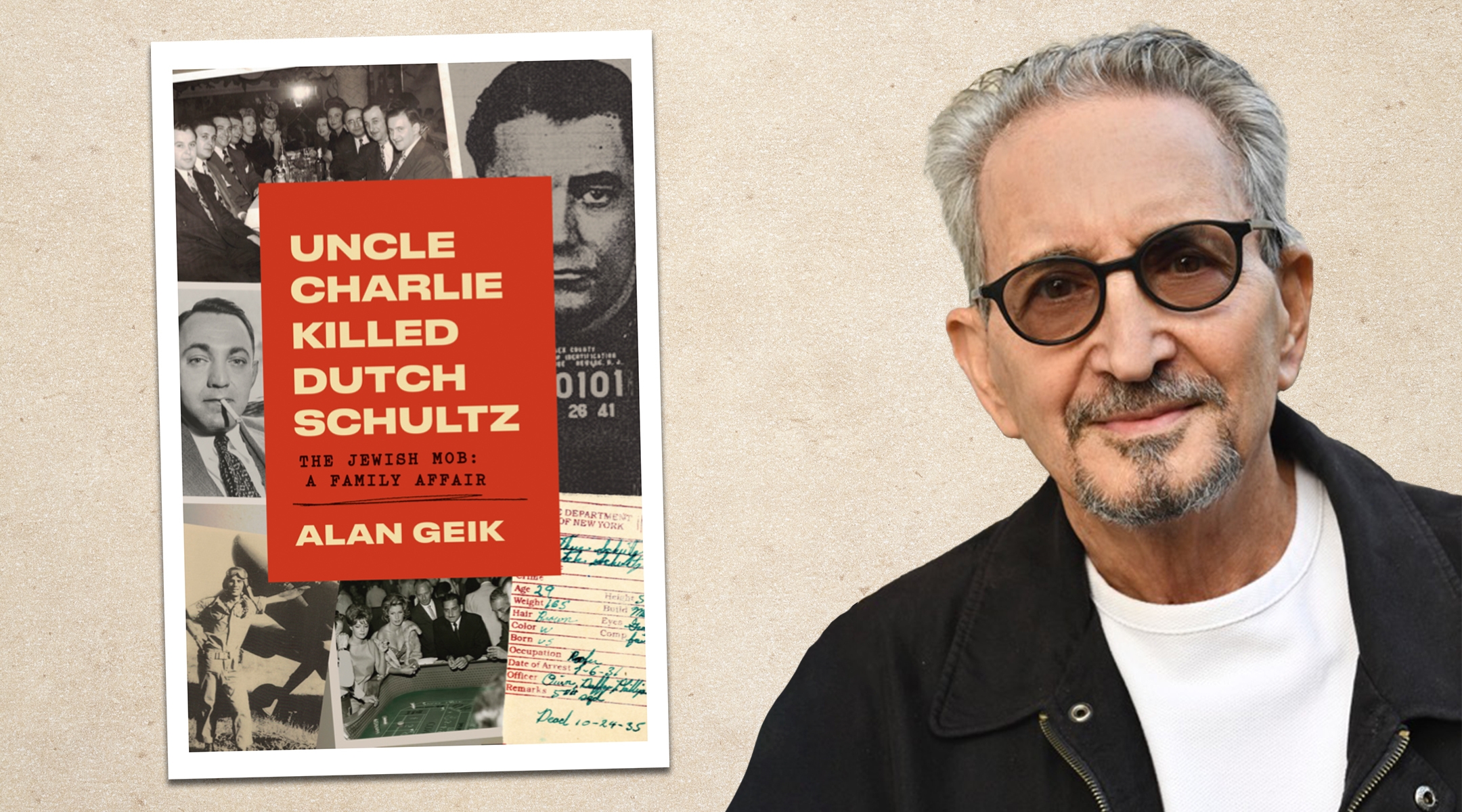 Books such as Geik’s “really put a personal experience to this whole world that we all know about, the world of New York mobsters,” said Larry Henry, author of a monthly column for the Mob Museum in Las Vegas. “The public’s appetite for mob stories is insatiable.”

“Uncle Charlie Killed Dutch Schultz” describes a tangled family tree ripe with, well, rotten apples. Geik’s father, Lou, was not actually in the mob but did reap benefits from his ties with organized crime, Alan concedes. Lou Geik was one of several individuals who delivered mob cash to Workman’s family over 23 years.

The author’s father is cited as a source for many of the anecdotes included in the memoir. Geik said that while his father’s business relied on mob protection, Lou Geik didn’t have “that extra whatever-it-took to be a really hardened criminal” — a trait, he said, his own older brother Bernard also lacked.

“My brother always wanted to be a gangland figure,” said Alan Geik. “So, instead my brother became a policeman.”

An ultimately very corrupt policeman. Bernard Geik joined the force in 1962 and resigned in 1971 after serving in the notorious Special Investigative Unit, which, as depicted in the book and the motion picture “Prince of the City,” devolved into an extortion ring. After resigning from the NYPD, Bernard Geik was arrested for bribery and bribe-taking in 1974. He reportedly pleaded guilty but served no time.

The disgraced detective went to work at his father’s trucking company. According to the author, his brother was one of the detectives provided by a supervisor to drive their Uncle George and other mobsters around town when they were transporting mob money in New York.

Uncle George Gordon was a real uncle. Gordon is allegedly one of the gangsters the actor George Raft modeled himself after for his roles in 1930s and ’40s crime melodramas. For decades, beginning at a casino and speakeasy near the Hudson River in midtown Manhattan, Gordon had a big hand in organized crime’s gambling operations, supervising enterprises in Florida, the Midwest, Las Vegas and Havana.

Alan Geik isn’t the only keeper of his family’s convoluted story. His sister Iris has her own memories of growing up mob-adjacent, such as when she and her parents were Gordon’s guests at the Stardust Hotel in Vegas when the mob was running its casino and skimming cash from the profits. Gordon wanted Lou Geik to work there.

According to Iris, Gordon posted a guard outside a private room in which she had been ensconced with a couple of slot machines. The 13-year-old was “mesmerized” by the slot machines. Her mother was initially unaware of what was going on. 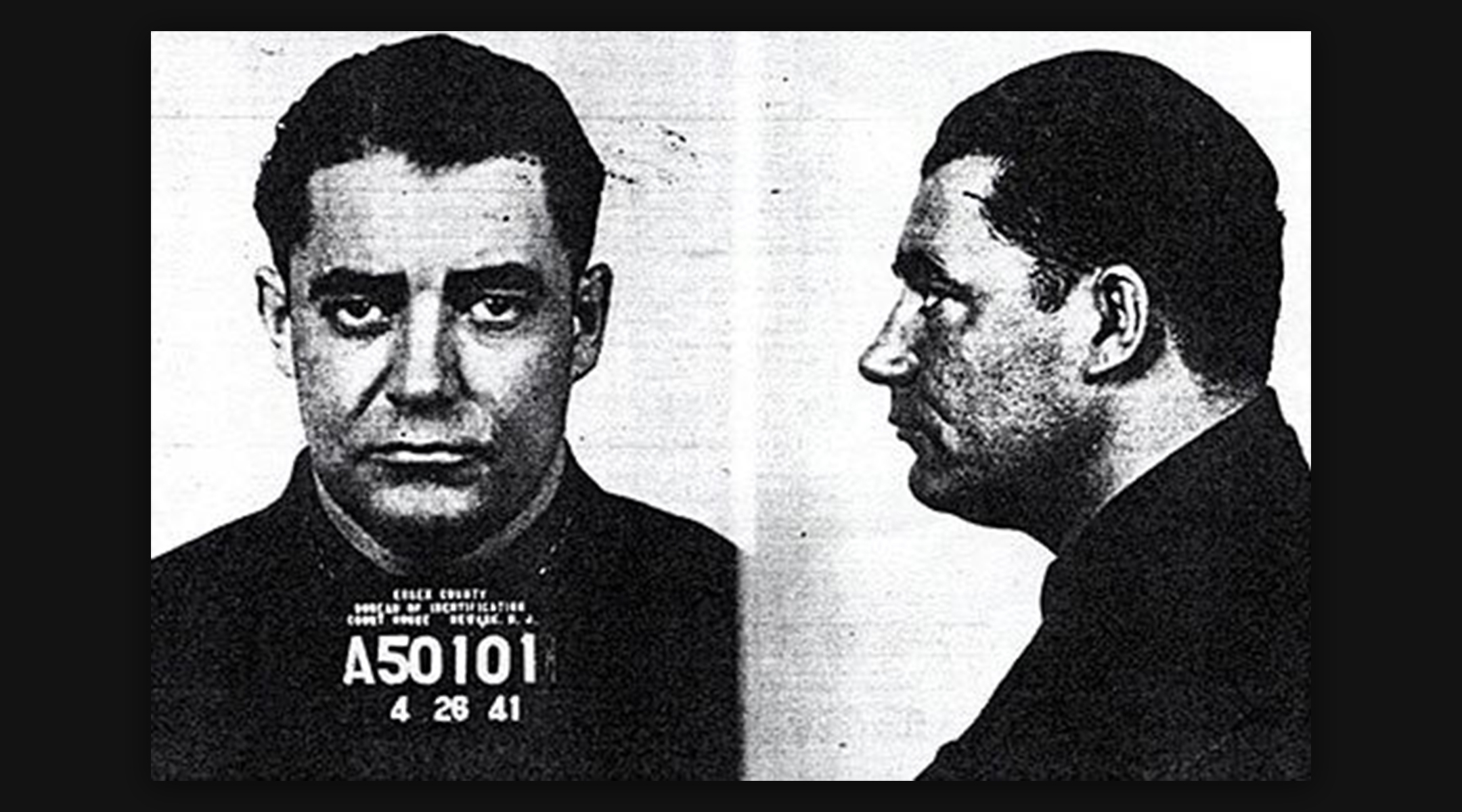 “Uncle Charlie” Workman, seen in 1941, pled guilty to the 1935 murder of mobster Dutch Schultz and was given a life sentence. (NYPD)

“I was having a blast,” Iris Geik said. “I’ll never forget when the door flung open and my itty-bitty mother came in with a big guard behind her. She immediately made me stop [playing with the slot machine] and give back the money I had won.”

Iris Geik, now a privacy lawyer in the Boston area, has written hundreds of pages of her own memoir about the wives and girlfriends of the Jewish gangsters, tentatively titled, “The View From the Women’s Table.”

“Their lives were complex but they were also heimische Jewish women,” she said, using the Yiddish word for cozy and familiar. She her mother and father eloped because they were a mixed couple: Her mother Reba was a Sephardic Jew and her father was Ashkenazi.

Geik remembered that as a child she noticed a newspaper article about a family friend being arrested. She said, “Mom! Mom! Look, we’re famous.” To which her mother replied, “That’s infamous, dear.”

Geik said that on several occasions her mother observed: “There are no second-generation Jewish mobsters. Jews don’t make gangsters out of their children.”

Reba Geik had been involved in caring for two of Iris’ aunts who lived in Brooklyn while they were dying. Those acts of kindness had a profound impact on Uncle George, the casino supervisor.

After the aunts passed away, Gordon always stood when Reba entered a room, Iris said. “My mother was very honored by that because he was such a big shot.”

Throughout her life, Reba Geik remained close to Sylvia Lorber, a friend from her teenage years. Lorber was the only mob mistress her mother would spend time with, said Iris. Lorber was the paramour of two Jewish gangsters: Benny Kassop, the brother of Murder, Inc. gunman Sammy Kassop, and Sam “Red” Levine, an observant Jew who wore a kippah under his fedora. Levine won the affection of Lorber while the Kassop brothers were in Sing Sing, the maximum-security prison in Ossining, New York.

“Sylvia was a hell of a lot of fun but my mother worried about her,” Iris said. “Sylvia told me her stories, which were kind of glamorous when she was young but sad when she was older.” After spending 20 years with Levine, Lorber couldn’t attend his funeral. Sylvia Lorber stopped talking to Reba Geik in her last years.

Jewish gangsters do, on occasion, display some altruism in Alan Geik’s memoir. Take Moe Dalitz, the head of the Cleveland Syndicate. He was a major bootlegger during Prohibition whose flotillas of illegal liquor on the Great Lakes came to be known as The Little Jewish Navy. His family ran legitimate laundry businesses in Boston and Detroit. Too old to be drafted during World War II, he enlisted at the age of 42 and was commissioned as a lieutenant. Dalitz ran the military laundry service on New York’s Governor’s Island — but declined to bunk in the island’s barracks, opting instead to stay at a swanky hotel overlooking Central Park.

Then there was Johnny Eder, a major source for Geik’s narrative. Eder was part of the Lower East Side teenage crime crew that included Uncle Charlie and Uncle George. As an adult he was a major fence for stolen jewelry and always had a bag of stolen rings on him. Eder also had many connections at City Hall and in the Brooklyn District Attorney’s office.

According to Geik’s account, Eder was the mob’s representative to the Haganah, the Jewish paramilitary force in Palestine. Eder arranged meetings in the noisy kitchen of the Copacabana, a mob hangout, between Haganah agents and mobsters and others described as “former wartime U.S. intelligence agents” working to secure weapons for Israel’s War of Independence. (The late Teddy Kollek, Jerusalem’s longtime mayor, would tell a story about passing cash to an intermediary at the Copacabana, who brought the money to an Irish sea captain with a ship full of munitions bound for the Holy Land. The bagman, according to Kollek, was Frank Sinatra.) 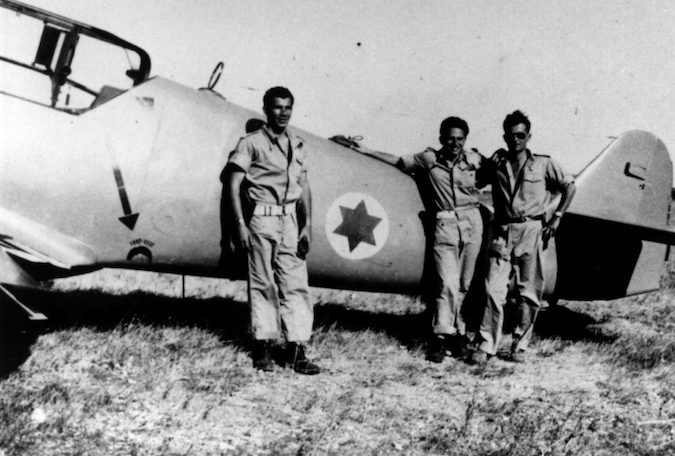 Author Alan Geik’s father-in-law, Lou Lenart, left, and other fighter pilots in front of Avia-S-199 plane. Lenart was part of the group of men transporting surplus fighter planes and other weapons to the Holy Land for use in the War of Independence. (Courtesy of Boaz Dvir)

Alan Geik has a very personal connection to the creation of the Jewish state. His late wife Nina was the daughter of Lou Lenart, a World War II fighter pilot who served in the U.S. Marines. Geik’s memoir details how the elder Lenart was part of the group of men transporting surplus fighter planes and other weapons to Palestine for use in Israel’s War of Independence. Lenart’s story was featured in Nancy Spielberg’s 2014 documentary “Above and Beyond,” about the creation of the Israeli air force.

The story of how Jewish gangsters used some violent muscle against Nazi sympathizers in New York has been told before in historical accounts, but one episode in Geik’s memoir is particularly dramatic. A pair of Jews attended a Bund rally at Camp Siegfried on Long Island, a summer camp that taught Nazi ideology, and were offered a ride back to the city by a Nazi sympathizer who they ended up beating senseless in Brooklyn.

Alan Geik was not really hungry when he met Meyer Lansky at a Central Park hotel in the late 1950s. The gangster asked the 15-year-old nephew of George Gordon if he wanted a pastrami sandwich. Geik declined. Then Lansky, who struck Geik as an “older Jewish man who I knew was really powerful,” suggested that they split one. It was an offer that Geik did not refuse.